A NASA astronaut and two Russian cosmonauts have blasted off for the International Space Station (ISS) on board a Soyuz MS-18 rocket.

The trio, who are part of the latest crew heading to the orbiting lab, launched from Earth at 08:42 BST from the Baikonur Cosmodrome in Kazakhstan.

They will orbit the Earth twice before making the trip to dock with the Rassvet module on the station, a nearly 20-foot-long ‘mini research module’, launched in 2010.

Just four minutes and 40 seconds after liftoff, views from the Soyuz show the spacecraft on its way to orbit, headed for the ISS.

Footage from lift-off at 8:42 today. NASA astronaut Mark Vande Hel is making his second trip to the ISS that’s orbiting 254 miles above the Earth 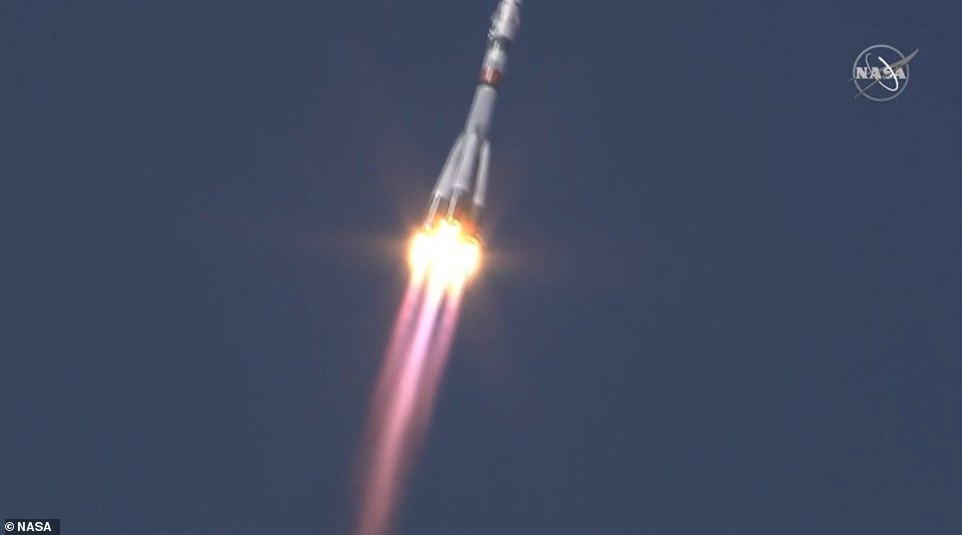 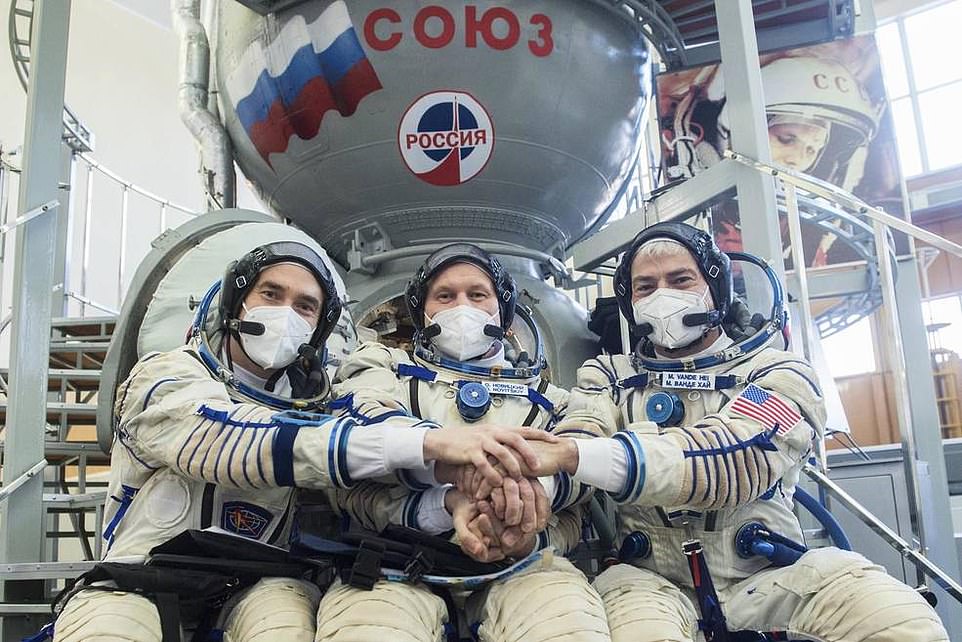 The Soyuz launch comes three days before the 60th anniversary of cosmonaut Yuri Gagarin’s launch to become the first human in space.

It is also three days before the 40th anniversary of the first launch of NASA’s space shuttle, taking place on April 13.

The trio will join the Expedition 64 crew including NASA Flight Engineer Kate Rubins, who arrived on the station with Commander Sergey Ryzhikov and Flight Engineer Sergey Kud-Sverchkov of Roscosmos in October 2020. 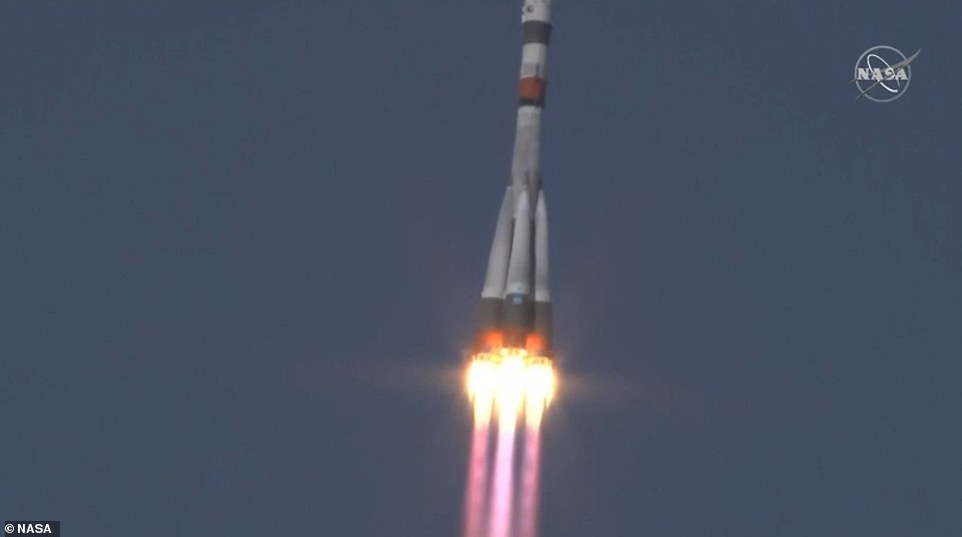 Liftoff! Mark Vande Hei  of NASA and cosmonauts Oleg Novitskiy and Pyotr Dubrov launched on their Soyuz spacecraft from the Baikonur Cosmodrome in Kazakhstan. They’ll join the Expedition 64 crew aboard the ISS 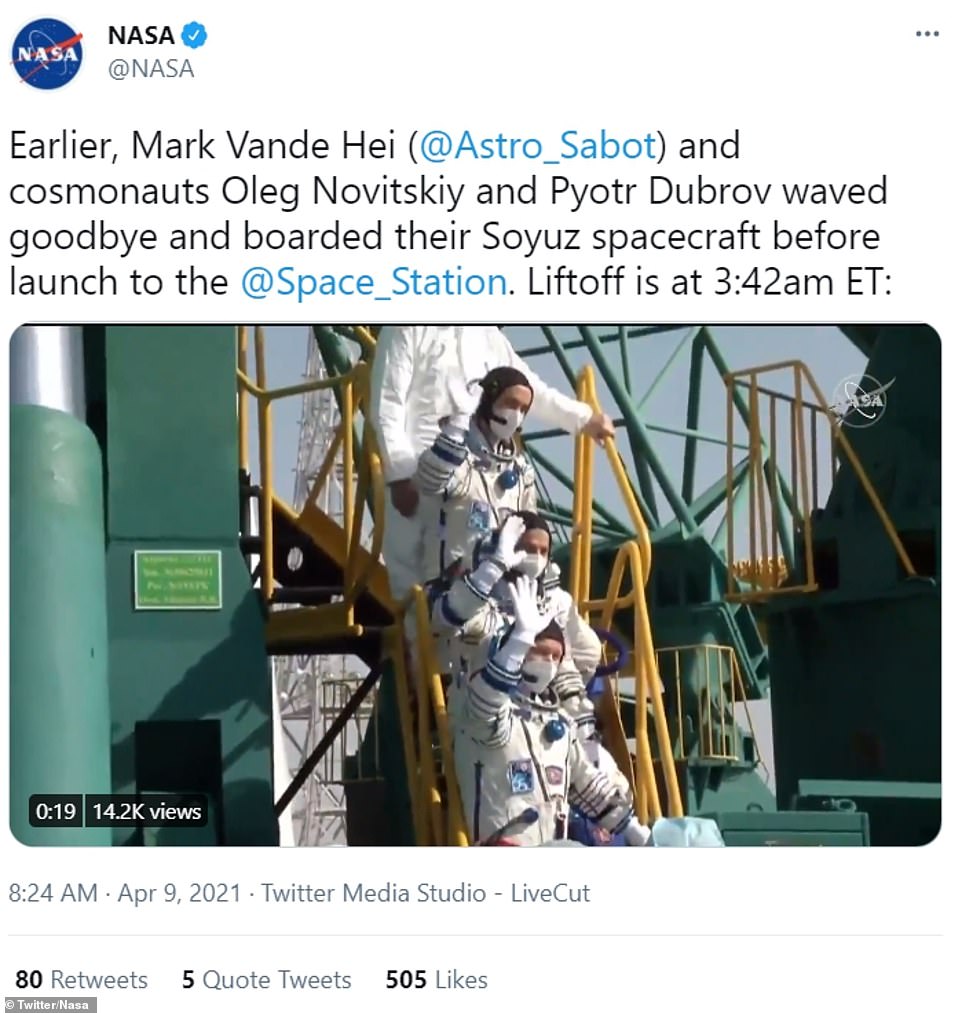 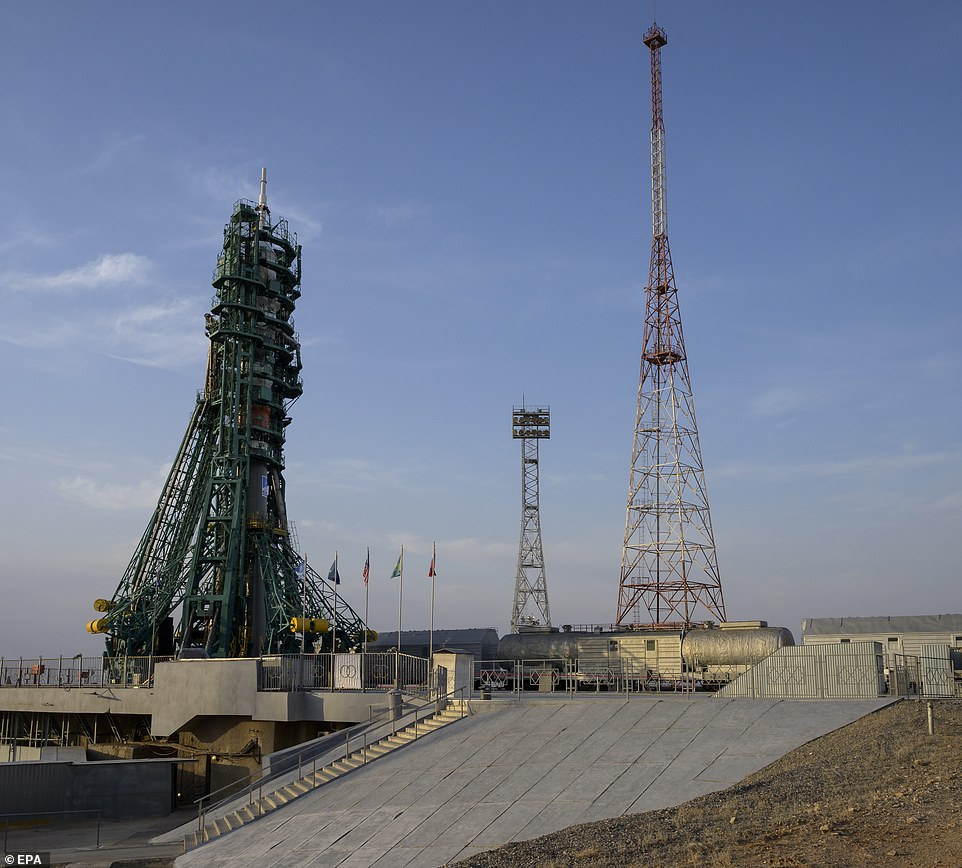 The Soyuz launch pad at site 31, at the Baikonur Cosmodrome in Kazakhstan, April 8. Expedition 65 NASA astronaut Mark Vande Hei, Roscosmos cosmonauts Pyotr Dubrov and Novitskiy are scheduled to launch to the International Space Station aboard the Soyuz MS-18 spacecraft on April 9 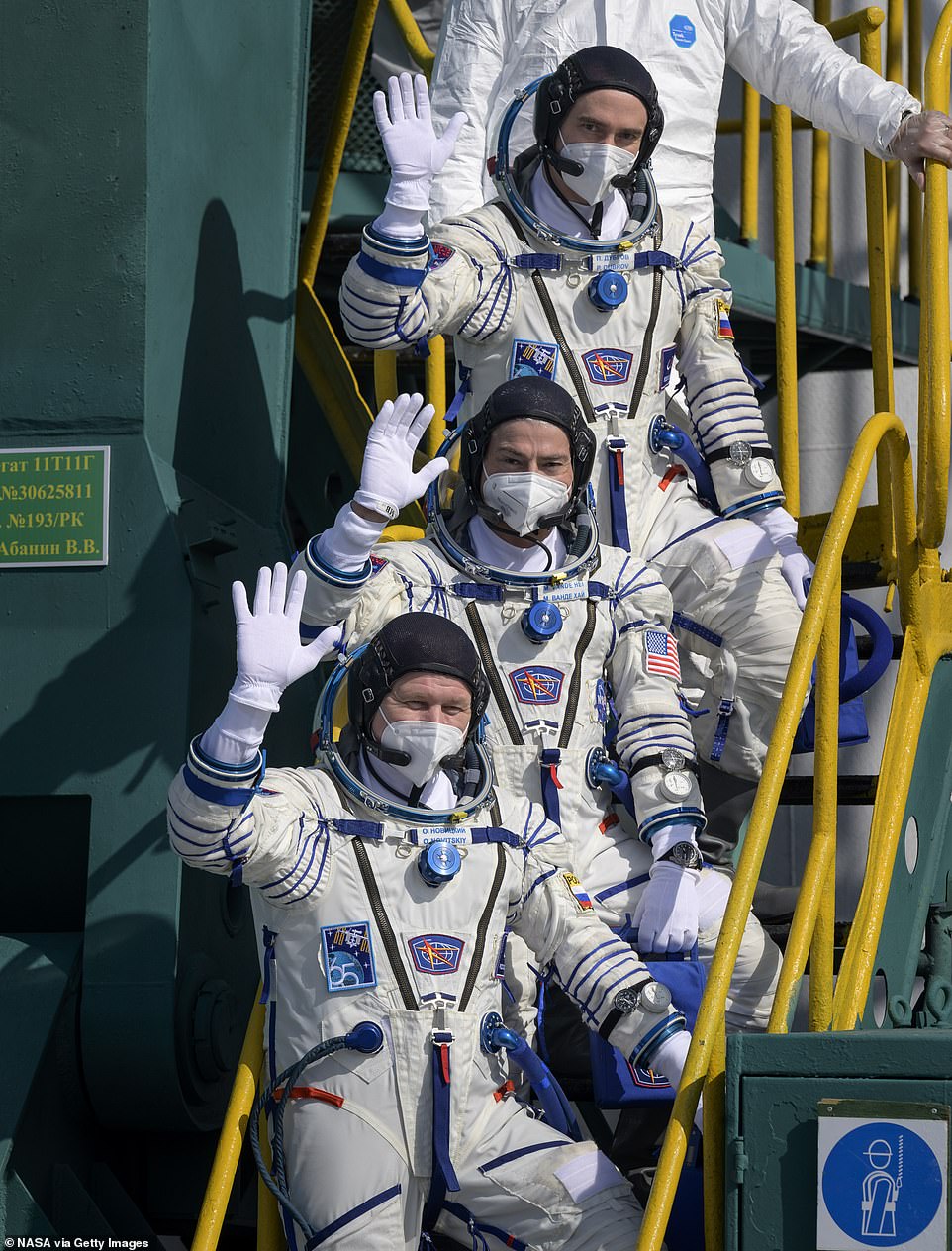 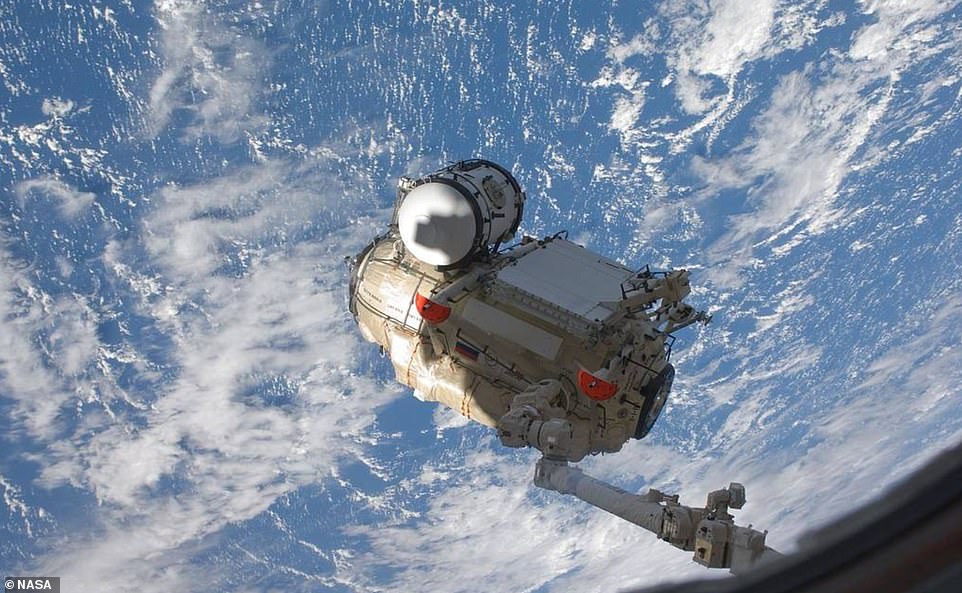 They will orbit the Earth twice before making the trip to dock with the Rassvet module on the station (pictured). It is used primarily for cargo storage and some payload operations

The spacecraft will dock to the station at midday, with coverage of rendezvous and docking beginning at 11:15 BST.

About two hours after docking, hatches between the Soyuz and the station will open, and the 10 crew members will greet each other.

Vande Hei, Novitskiy, and Dubrov will be part of Expeditions 64 and 65. The departure of Rubins, Ryzhikov, and Kud-Sverchkov on Friday, April 16, will mark the start of the new expedition.

The new launch follows a complicated docking manoeuvre on the ISS on April 5 that saw the SpaceX Crewe Dragon spacecraft move from one docking port to another. 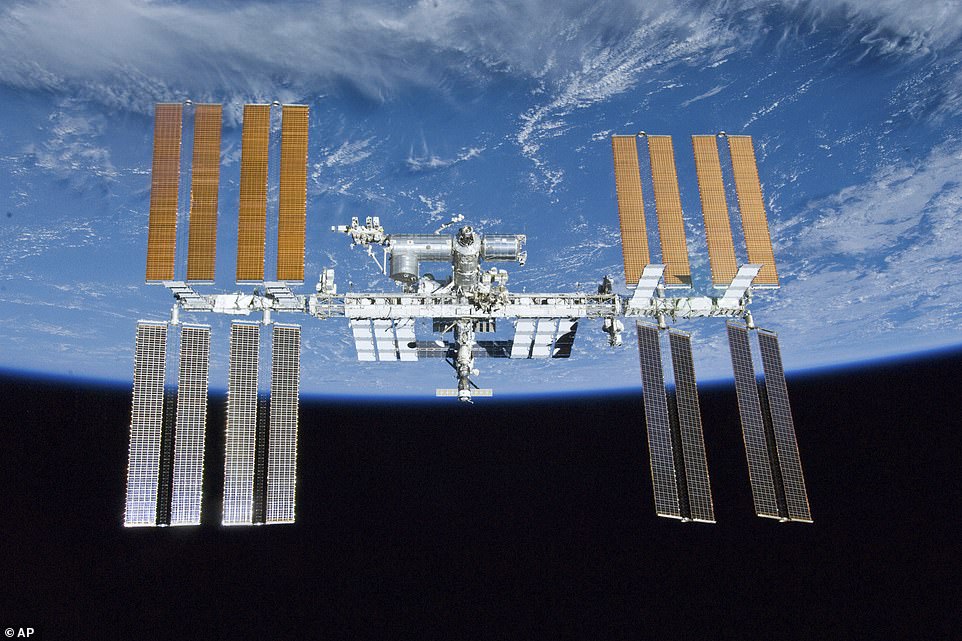 The International Space Station (ISS, pictured) is a $100 billion (£80 billion) science and engineering laboratory that orbits 250 miles (400 km) above Earth 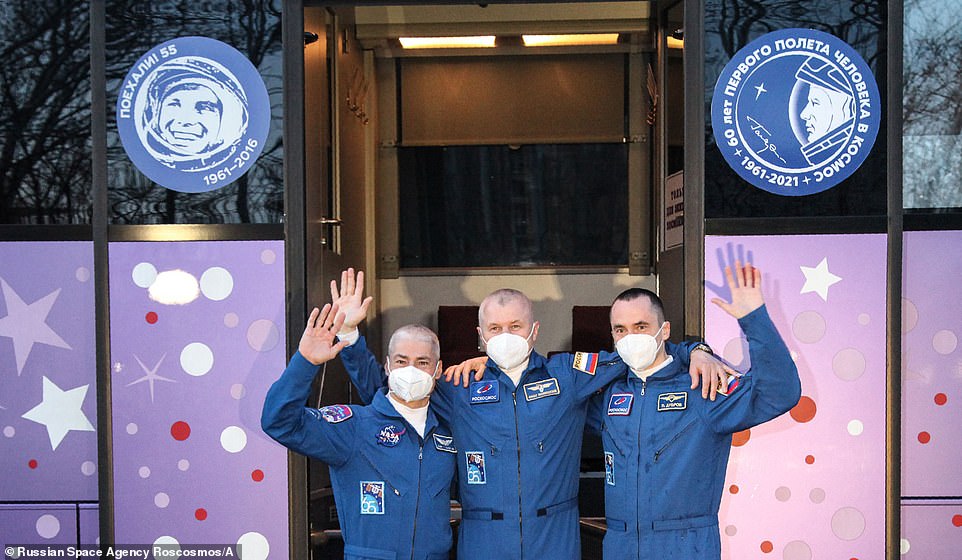 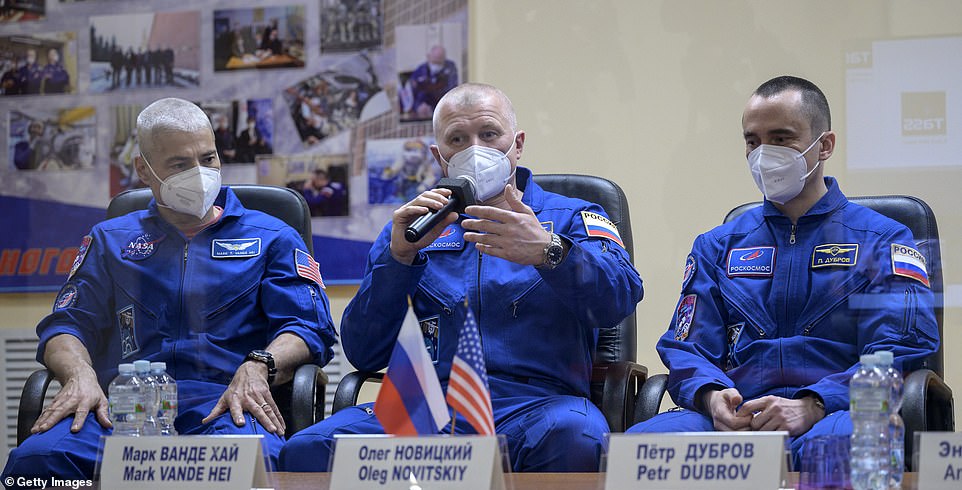 This wasn’t to make way for the Soyuz, which docks with a Russian module, but rather to make way for both the next Crew Dragon later this month and a cargo dragon ship, due to arrive at the station in June.

A week later, on April 28, the Crew-1 mission will come to an end when Hopkins, Walker, Victor Glover and Soichi Noguchi splash down near Florida.

The returning Crew Dragon Resilience will be refurbished for the ‘Inspiration4 Mission’ that will take four private citizens to the ISS no earlier than mid-September.

The US space agency, Nasa, spends about $3 billion (£2.4 billion) a year on the space station program, a level of funding that is endorsed by the Trump administration and Congress.

A U.S. House of Representatives committee that oversees Nasa has begun looking at whether to extend the program beyond 2024.

Alternatively the money could be used to speed up planned human space initiatives to the moon and Mars.