This is the dramatic moment an RNLI volunteer jumped from a lifeboat to rescue a teenager struggling against the tide as it dragged him away from the coast.

Volunteers were called out at 2.42pm to an incident off the coast of Portrush in Northern Ireland on September 25.

When the RNLI team arrived at Portstewart Head they found a teenager wearing a wet suit treading water, battling against the waves which threatened to dash him on the rocks and drag him out to sea.

A mechanic from Portrush RNLI jumps into the water near Portstewart Head, Northern Ireland, to try and save a teenager who was pulled out to sea by the tide. A cable is attached to the mechanic so the rest of the crew can haul the pair back onto the lifeboat

Video footage captured the heroic moment the mechanic leaped into the angry waves.

They had a cable attached to them so once they managed to grab hold of the teenager, who had been waving his arms in the air, the rest of the crew could pull the pair of them out of the water.

Force 6-7 winds as well as showers made the rescue operation more difficult.

The lifeboat, under coxswain Des Austin, had been positioned so that it broke the waves, making it easier for the mechanic to reach the stranded teenager.

Speaking afterwards, Mr Austin said: ‘Conditions were challenging at sea today and time was of the essence. 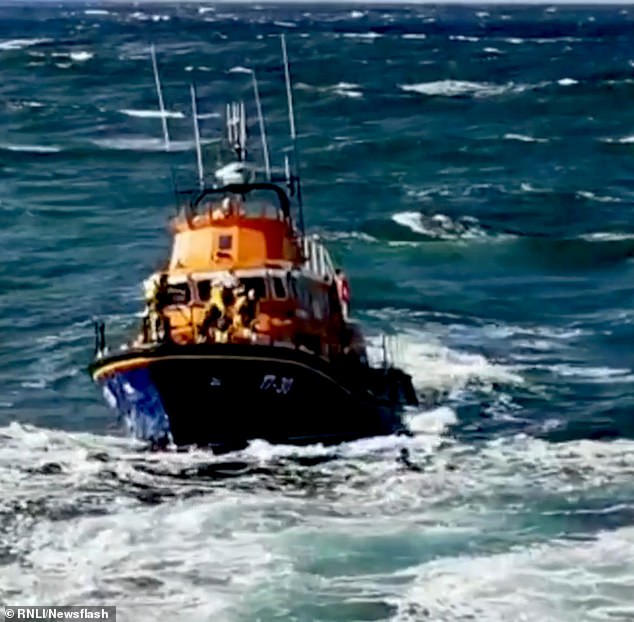 ‘The tide was turning at the time the casualty got into difficulty and the conditions were pulling him out to sea.

‘The prompt actions of the lifeboat crew saved a life and we would like to wish the casualty well following his ordeal.’

The lifeboat crew had carried out casualty care because the teenager had shown signs of hypothermia and exhaustion.

When they reached Portrush Harbour, the teenager was given to Coleraine Coastguard and the Northern Ireland Ambulance Service.