Controversial Greens senator Lidia Thorpe was almost banned from the Senate for calling a Liberal MP racist for his speech about woke ideology.

The fiery parliament stoush was just hours before Senator Thorpe stunt in the Marble Foyer of Parliament House as guests assembled for the Midwinter Ball.

Senator Alex Antic took the floor on Wednesday afternoon for a two minute statement decrying what he saw as the demise of Western civilisation.

‘Western culture has reached a tipping point. Left-wing activism supposedly based on equity, diversity and inclusion uses its allies in the media, the corporate sector and politics to prohibit any views it disapproves of,’ he said.

‘Young adults have little knowledge of history, the result of a curriculum denuded of Western history, replaced by critical race theory and a sense of victimhood.’

Senator Thorpe decided she had enough and interjected: ‘Why do you have to be so racist?’

‘Senator Thorpe, you are out of order. You need to contain your commentary to an appropriate standard for the Senate,’ she said.

The Greens MP protested ‘this is my workplace’ and she would not stand by during Senator Antic’s antics.

The opposition insisted she withdraw her comment but Senator Thorpe refused. ‘I’m not withdrawing, because it’s a fact,’ she said.

‘With all due respect, acting deputy president, could you please inform me what the ramifications would be for me to remove my remark about somebody being racist and me not feeling safe?’

Senator O’Neill said she didn’t want to give her ‘a platform to repeat the terms that you’ve used’ and had Senator Thorpe’s microphone turned off until she agreed to withdraw the ‘unparliamentary’ comments.

Senator Thorpe’s colleague Mehreen Faruqi stood up in her defence to note racism was often ‘thrown around’ in the chamber and needed to be called out.

‘I think people, when they are throwing around racism, need to be aware of what they are doing and how it’s impacting on other people,’ she said.

‘With all due respect, I need to be pointed to where using the word ‘racism’ in this parliament—I need to know where it’s unparliamentary because I don’t understand. I’m feeling violated…’ Senator Thorpe replied before she was cut off.

‘Senator Thorpe, please resume your seat. I’m assuming that you are refusing to withdraw and so I will be reporting this matter to the Senate,’ the acting deputy speaker said before moving on. 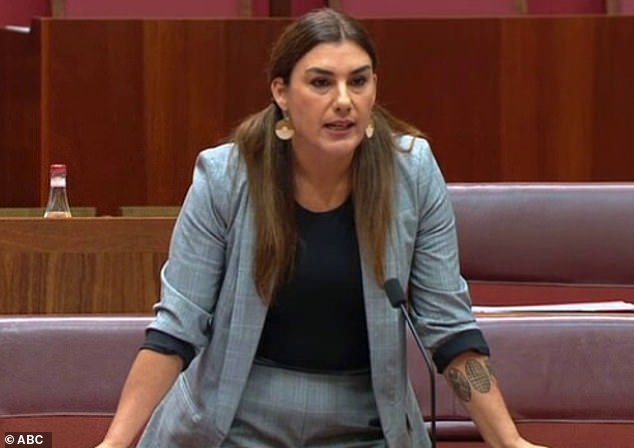 Senator Thorpe decided she had enough and interjected: ‘Why do you have to be so racist?’

Senator Thorpe later withdrew her comments when it was her turn to speak, after being advised she would be banned from the Senate for a day if she didn’t.

Afterwards she released a scathing statement claiming the episode showed it was OK to be racist in parliament but not to call it out.

‘This parliament punishes black women for calling out racism, yet there are no consequences for being racist in the Senate chamber. I am not safe in this workplace,’ she said.

‘If I didn’t withdraw, I could have been kicked out of the chamber for a day and the Greens would be down a vote.

‘They cut off my microphone and told me to withdraw my comment. How is that creating a workplace where everyone is “safe and welcome to contribute”?

‘It’s “unparliamentary” to call out racism, but not unparliamentary to be racist. Racism is a disease in this country. It’s violent and literally makes people sick. 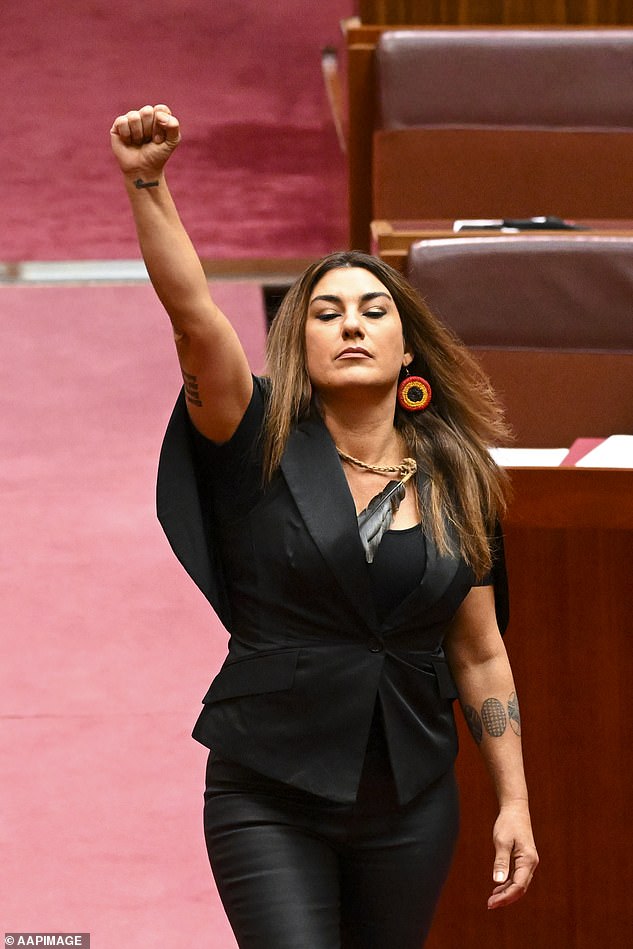 ‘We need an anti-racist code of conduct for MP’s to be accelerated and implemented to stop this from happening in the first place.’

She was in angry the Midwinter Ball accepted Woodside Energy as a sponsor, and joined a protest on the Parliament House lawn.

The speech that set off Lidia Thorpe

History tells us that civilisations and empires are transitory. There are increasing signs now that Western culture has reached a tipping point.

Left-wing activism supposedly based on equity, diversity and inclusion uses its allies in the media, the corporate sector and politics to prohibit any views it disapproves of.

Too many of our modern leaders are not across this threat. They seem to think that defending our values is beneath them and that we have time on our side. We do not.

Suicide and depression rates in our young people continue to skyrocket. We’ve failed to instil in them a sense of meaning and purpose, replacing it with empty modern ideologies like climate alarmism.

On leaving school, young adults have little knowledge of history, the result of a curriculum denuded of Western history, replaced by critical race theory and a sense of victimhood.

Sadly, too many have cowered before these ideologies, afraid of being called the various isms and phobias, and they’re wreaking havoc across the West.

If a principled defence of liberty was ever needed in this country, it was over the past two-and-a-half years, yet we were told that those concerned with freedom were dangerous extremists.

We need more brave men and women to stand up for future generations of Australians and hand them a culture that is greater than the one left to us.

The relative prosperity and peace we’ve enjoyed have allowed us to become complacent, thinking that such a decline couldn’t happen here, but the time has come for our leaders to stand up for what is right. Without urgent, strong leadership the West is doomed.