Shoppers stood on pictures of Emmanuel Macron’s face and used them as a social distancing guide in a Libyan clothing store today, amid anger at the French president for defending Prophet Mohammed cartoons and cracking down on radical Islam.

The identical Macron posters – defaced with footprints – were laid out at appropriate intervals in a clothing store near Tripoli.

The Libyan capital has also seen protests where Macron portraits have been stamped on and set on fire amid demonstrations across the Muslim world.

Macron has become the focus of protests after vowing a crackdown on ‘Islamist separatism’ in France and staunchly defending the Mohammed cartoons which led to a teacher’s murder two weeks ago.

The French government has also shut down a Paris mosque and raided other Islamic associations in the wake of Samuel Paty’s beheading earlier this month.

Stand here: A man stands on a picture of Emmanuel Macron’s face while queuing in a store in Tripoli today amid anger at the French president across the Muslim world 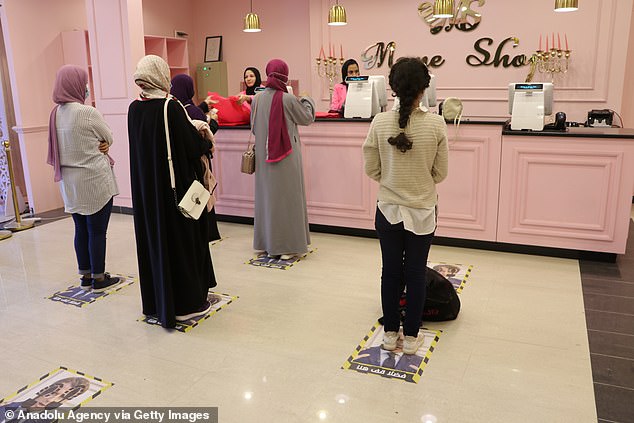 Many Macrons: This women’s clothing store used the identical Macron posters to maintain social distancing as people waited at a till near Tripoli

Libya is one of many Muslim-majority countries where worshippers have voiced their anger at Macron in recent days.

Some have called for a boycott on French goods while others have set fire to French flags in the streets of Tripoli.

Libya’s foreign ministry on Tuesday condemned Macron’s ‘reckless insults’ towards Islam after the French president defended the right to blaspheme.

A foreign ministry spokesman demanded that Macron apologise to the world’s 1.5billion Muslims, according to Libyan media.

Macron has described murdered teacher Samuel Paty as a ‘hero’ and said his death was an attack on freedom of expression, after Paty showed one of the offensive Charlie Hebdo cartoons to his class.

Before Paty’s grisly death, Macron had vowed to fight ‘Islamist separatism’ in France and described the religion as being ‘in crisis all over the world’. 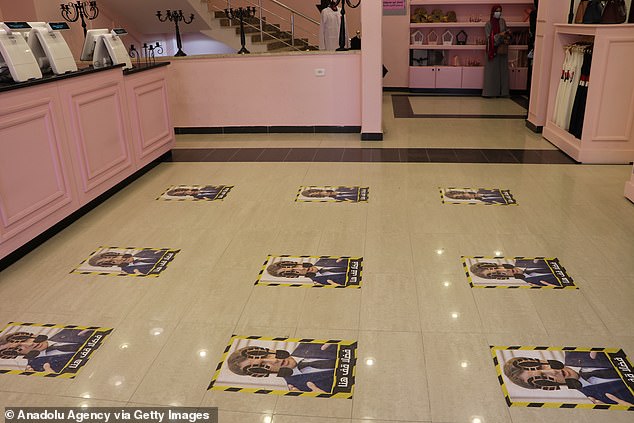 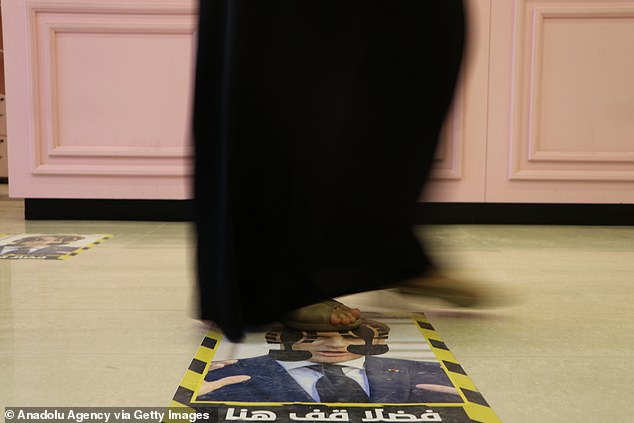 France and Turkey – who have previously clashed over Libya among other issues – have also been at loggerheads over a Charlie Hebdo cartoon mocking Turkish leader Recep Tayyip Erdogan.

Erdogan called the cartoonists ‘scoundrels’ and accused the West of wanting to ‘relaunch the Crusades’ by attacking Islam after the image appeared on the front of this week’s magazine.

Rouhani said that ‘the West should understand that… insulting the Prophet is insulting all Muslims, all prophets, all human values, and trampling ethics’.

‘Insulting the prophet is no achievement. It’s immoral. It’s encouraging violence,’ Rouhani said in a televised speech during the weekly cabinet meeting.

‘It’s a surprise that this would come from those claiming culture and democracy, that they would somehow, even if unintentionally, encourage violence and bloodshed,’ he added. 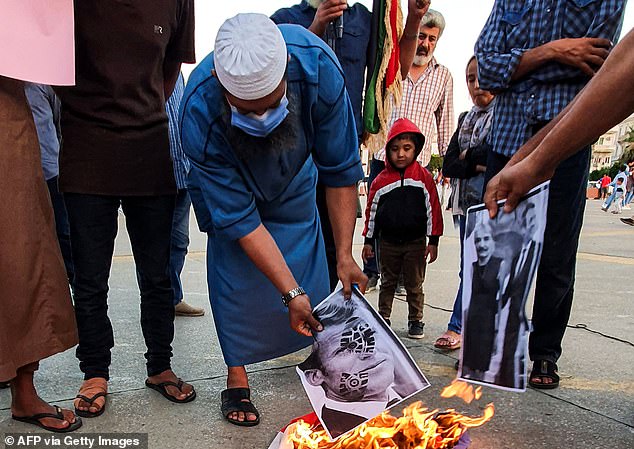 Demonstrators set fire to pictures of Macron in Tripoli, one of which includes the face of Libyan general Khalifa Haftar photoshopped onto a woman’s body 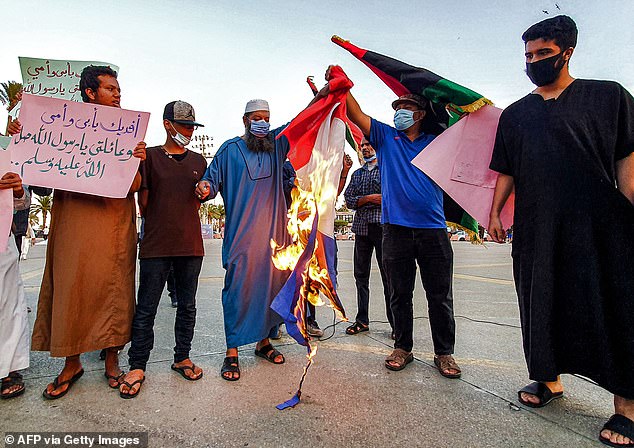 Rouhani also called on the West to ‘stop interfering in Muslims’ internal affairs’ if it ‘truly seeks to achieve peace, equality, calm and security in today’s societies’.

Pakistan’s prime minister Imran Khan sent a letter to the leaders of fellow Muslim countries calling on them to ‘counter the growing Islamophobia in non-Muslim states’, especially Western ones.

Khan warned of a ‘dangerous cycle’ in which ‘hurtful actions result in reactions from Muslims as they see their faith and their beloved Prophet targeted which results in further discriminatory actions by governments’.

He argued that if European governments could limit free speech by banning Holocaust denial, they should also be willing to crack down on blasphemy that causes ‘pain and hurt’ to Muslims.

‘There has to be an understanding by the Western world of giving a similar respect to Muslims,’ Khan said in the letter dated today.

European leaders have come to Macron’s defence in his row with Erdogan, with Britain’s foreign secretary Dominic Raab today calling on NATO allies to stand together in defence of tolerance and free speech.