‘Liar’ ban in Commons will stay: Speaker says MPs should not be allowed to accuse each other of dishonesty… because they would ‘speak about nothing else’ if it was permitted

MPs should not call each other liars because ‘they would speak about nothing else’ if it was allowed, the Speaker has warned.

Sir Lindsay Hoyle said there were other ways of ‘exposing’ those who don’t tell the truth.

Labour MP Dawn Butler was suspended from the Commons in July for claiming Boris Johnson had ‘lied to the House and the country over and over again’.

He added: ‘That is not the art of debate – I think it’s about proving who’s right and who’s wrong, not taking a simplistic view and saying: “Well, that’s very easy. You’re lying”.’

Sir Lindsay also urged MPs to stick to the dress code, adding: ‘The fact is the House had gone weak on whether people should wear ties. We’ve said wherever possible we expect people to wear them. But we’re very clear jeans and trainers are not expected, it’s about business attire.’

He said he and other MPs had to be ‘careful’, but politicians would not be deterred from doing their job.

Measures are in place to deal with terrorists, stalkers and ‘individuals with mental health issues that turn up’ at Parliament, he added.

Sir Lindsay dismissed reports that he has banned MPs from using Twitter in the Commons chamber as ‘ridiculous’.

But he urged them, wherever possible, to wear masks while at Westminster to protect parliamentary staff from Covid infection.

Labour MP Jo Cox was murdered in Birstall, West Yorkshire, in 2016, and several other MPs have since spoken of receiving death threats.

Sir Lindsay said: ‘We’ve got a great security team in Parliament. We’ve a joined-up network right across the country now to make sure that support is there.

‘It’s not just about the terrorist threat. You have individuals with mental health issues that turn up, that need support and help and of course you do get stalkers.’ 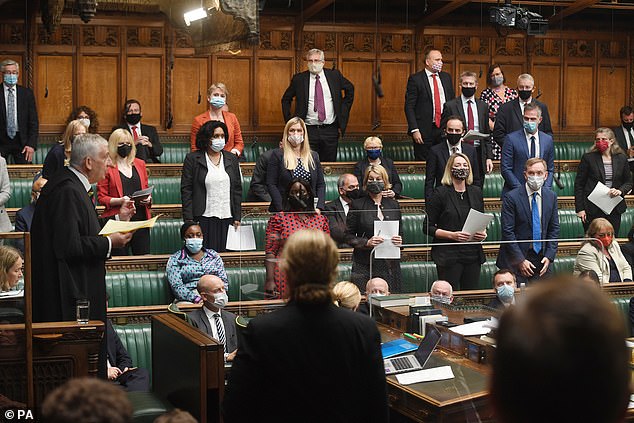 He added: ‘Since I got this job I’ve had two death threats. Is it nice? My life continues, but it comes with the job doesn’t it?

‘But what it won’t do is stop me being a Member of Parliament for Chorley.’

Sir Lindsay also said he faced an ‘ongoing slog’ to stop ministers revealing the details of government policy in advance of it being announced in the Commons chamber.

The recent increase in MPs applauding each other’s speeches had to end, he added, as it was ‘partisan’ and would ‘end up taking more time and stopping other people speaking’.