When Liam Brady was 13 and the most exciting young player in Irish football, the people from Coventry City offered his mum a washing machine.

Arsenal used to send him football boots at Christmas. That was the equivalent of the hard sell in 1969.

‘Arsenal just wanted to stop me going anywhere else – and it worked,’ smiles Brady. 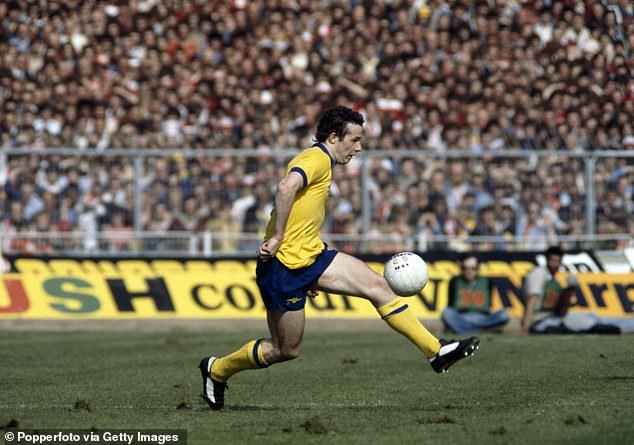 The midfielder was part of some of the club’s greatest victories, such as the 1979 FA Cup final

It is different now and Brady, 65, knows all about that. His seven seasons at Arsenal in the 1970s established him as one of the greats of the club.

Later, he returned for a two-decade stint as head of Arsenal’s academy. That ended at his behest in 2014 and by then he was aware that token Christmas gifts were not enough.

‘It was no longer adequate just to sell a boy and his family the merits of the club,’ Brady tells Sportsmail.

‘The parents knew how to work the system and the agents knew this. They were pulling the strings and the demands were increasing all the time.

‘Towards the end of my time, we were always frightened another club would take boys away.’

Fortunately for the Arsenal of yesteryear, Brady’s head was never turned sufficiently. In the 1960s, Manchester United had a net cast over Irish football and they knew all about the young waif with snake hips and a seamstress touch. 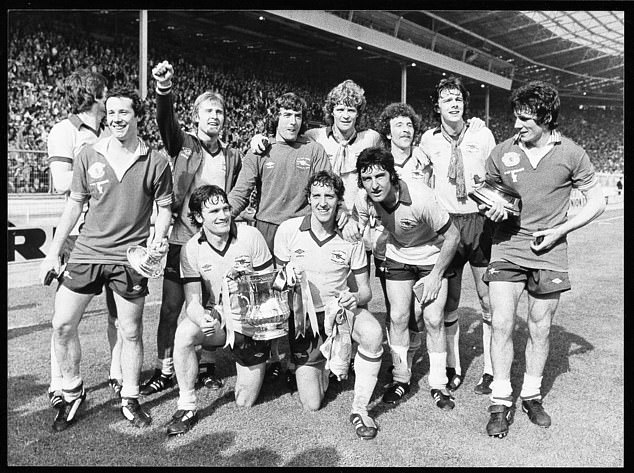 But Arsenal were smart and Brady arrived in London as a 15-year-old destined to leave nine years later as one of the greats of European football.

‘I am just grateful to Arsenal that it happened,’ he says over coffee in London. ‘I was from a working class family in Dublin.

‘My dad had a tough job. He was a bullockman. His job was to mind the cattle that left Ireland by boat for England.

‘I could never have done that. I have no idea what I would have done without football. Man United had a hold in Ireland at the time.

‘They got everyone. But Arsenal realised they were missing out so they sent a guy over. 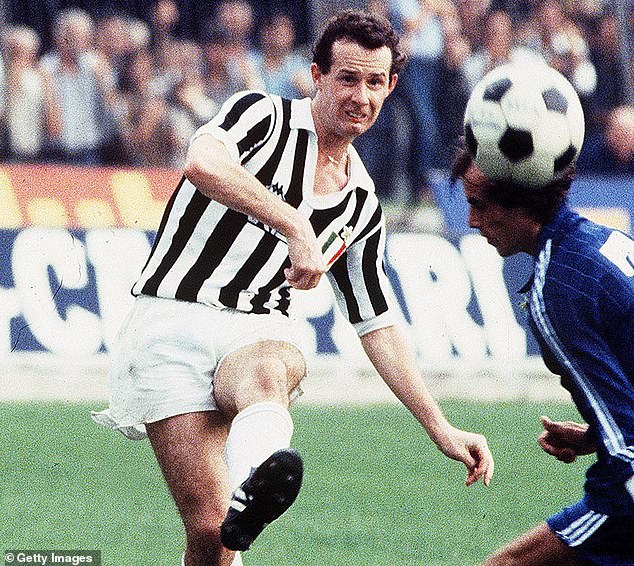 ‘I happened to be playing in the first game he watched. I was tiny but he must have seen something. I came over at 15, turned pro at 17.

‘I had been practising since I was seven for that chance. I wasn’t going to blow it.’

Brady was sublime, instinctive, left-footed but able to play off both sides after instruction from an older brother, his running style not dissimilar to Ryan Giggs. He could cross the ball better, mind.

He won Player of the Year at Arsenal three times and the PFA gong once, the first ‘foreigner’ to do so.

But one of the most notable things about Brady’s time at Highbury was that after five years of rebuilding he left, just when things were about to take off. 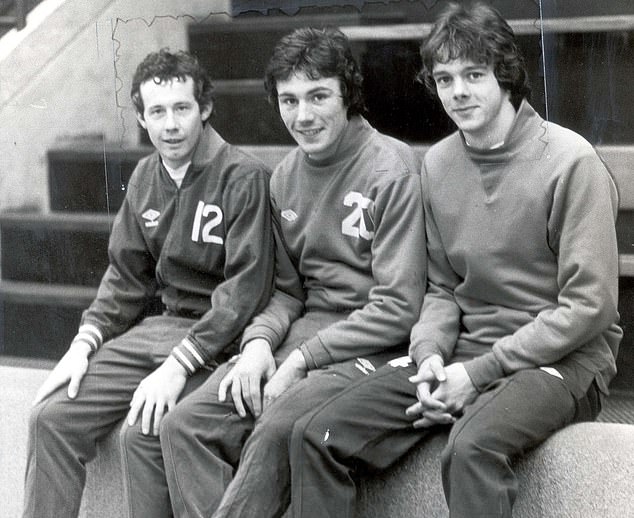 Arsenal’s 1979-80 season comprised 70 games. In April and May they played 21 times in 60 days and lost only once in regulation play.

They finished fourth in the League and lost the FA Cup and European Cup-Winners’ Cup finals, the latter on penalties to Valencia.

Terry Neill’s team, beaten by West Ham at Wembley in their third FA Cup final in a row, also had six Irishmen — among them Pat Jennings, David O’Leary and Frank Stapleton. From the outside, it seemed primed.

‘We had got stronger but there was no real investment,’ says Brady (right). ‘We were never going to compete for the League unless we spent and Arsenal were not prepared to.

‘The board never told me to stay and help them challenge. The chairman said he wasn’t going to get involved in million-pound auctions for players like Trevor Francis. 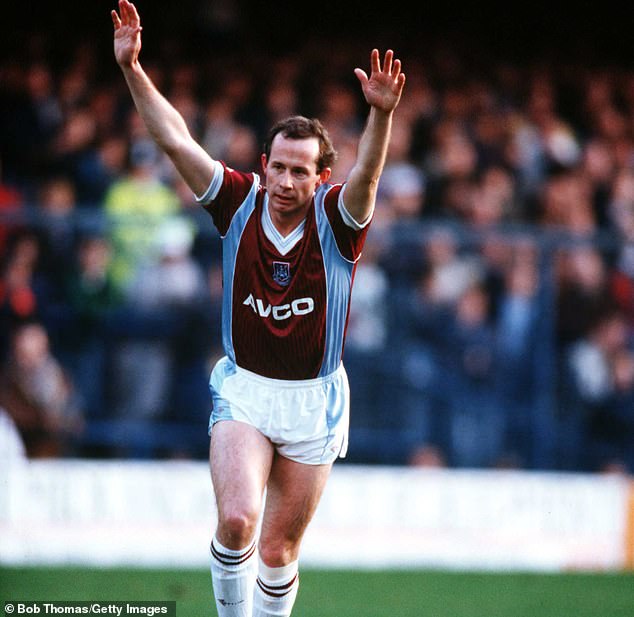 ‘Arsenal thought that money was madness. That told me everything. Financially, Arsenal only tried to stop me going at the last minute. But I had already made my mind up by then. I was going to Juventus.’

One of the key influences on Brady was Kevin Keegan. The former England forward had moved from Liverpool to Hamburg in 1977 and Brady was intrigued. Last summer, during lockdown, Brady even rang Keegan to talk about it.

‘I was thinking about doing a book and I called Kevin to remind myself what’d happened,’ he says.

‘Turns out he was asked to go to Juventus before me but didn’t fancy Italy, so I was lucky to get the chance.’

Brady was actually due to leave Arsenal for Bayern Munich until their star player, Paul Breitner, objected and told the German club he wanted to move into midfield.

‘Karl-Heinz Rummenigge told me that when we later played together at Inter,’ he says. Ultimately, Juventus and Brady suited each other perfectly. Brady’s Arsenal wage of £40,000 jumped in Turin but that wasn’t the only benefit. 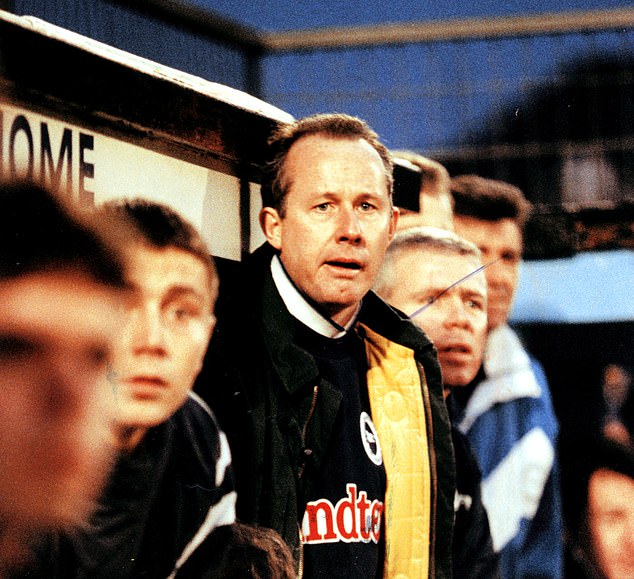 The squad he joined as the only foreigner allowed under Serie A rules was extraordinary. Dino Zoff, Antonio Cabrini, Claudio Gentile, Marco Tardelli, Roberto Bettega. A year later, Paolo Rossi arrived. Giovanni Trapattoni was the manager.

It was the nucleus of an Italy squad that were to win the 1982 World Cup. By then, Brady had helped them to land back-to-back Scudetti. Tardelli — a scorer in the World Cup final — later described Brady as ‘my teacher’.

They loved Brady at Juve for his elegance and goals, but also because of his enthusiasm for Italy. He learned the language quickly.

‘I did have other options,’ Brady says. ‘I had Cloughie (Nottingham Forest manager Brian Clough) on the phone. ‘Hello young man, you know who this is’.

‘I met (Manchester United boss) Dave Sexton in Dublin. But I wanted to go abroad. Ken Friar, the Arsenal club secretary, told me I was going to a foreign country and may struggle, but I reminded him I had already done that when I left Ireland for England. 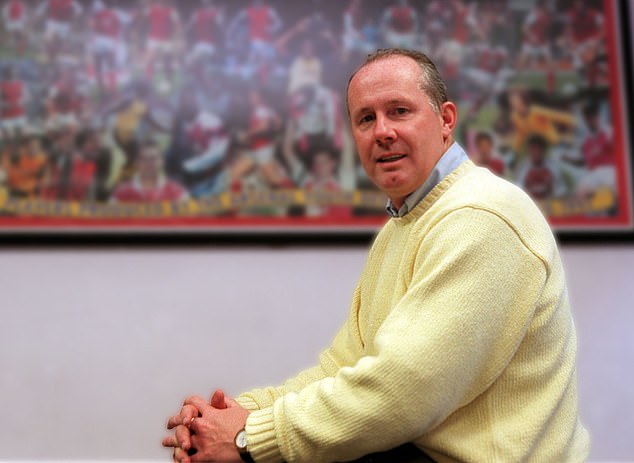 ‘We had a real close spirit at Juventus. Rossi, Tardelli, Cabrini and myself had a real bond as young players. I was just proud to be there and Keegan was a huge influence.

‘He had learned the language (at Hamburg), went out with the players and bought into the club. That was what I tried to do, to learn the history of the club, the older players.

‘That’s only right. Lots of people said I wouldn’t be able to hack it, so there was satisfaction in proving them wrong.’

Brady only stayed at Juventus for two years. He was replaced as the club’s foreign player by Michel Platini but stayed in Italy, joining Sampdoria, then moving to Inter Milan and on to Ascoli.

By the time he came ‘home’ to spend his final three seasons at West Ham, he was 31.

His departure from Turin was remarkable. Told he was to be sold, he informed Trapattoni he would no longer take penalties during the season’s last three games.

On the final day, drawing 0-0 at Catanzaro in a match they needed to win to defend their title, Juventus were awarded a spot-kick with 15 minutes left.

‘The club had just dropped that bombshell on me and it was hard to swallow,’ recalls Brady.

‘But we get a penalty and of course the new penalty-taker had been substituted. None of the Italians wanted to take it. So I took it.

‘It wasn’t a great penalty. Had the keeper gone the right way, he would have saved it. But he didn’t. We won. Two titles in a row.’

Brady’s career included 72 caps for the Republic of Ireland and was not short of great goals. The one he scored on his farewell match for West Ham in 1990 is worth a look.

But his most memorable was the waist-high, swerving missile he scored for Arsenal against Tottenham in a 5-0 win at White Hart Lane in 1978.

‘It’s probably the best goal I ever scored,’ he nods. ‘I made a tackle to make it happen, too! It was quite rare for me to tackle as clean as that. Big Pat (Jennings) was always on at me.’

With Arsenal and Spurs meeting at the Emirates on Sunday, Brady is not keen to deepen Arsenal’s sense of woe by being too critical. It is still his club.

He left seven years ago because his work at the academy had changed. Too many hours at his desk.

‘That had become a chore,’ he explains. ‘We were just staring at computers all the time.’

Previously critical of how recruitment was taken out of Arsene Wenger’s hands in the Frenchman’s latter years, Brady believes the buying of a player lies at the heart of Arsenal’s issues. 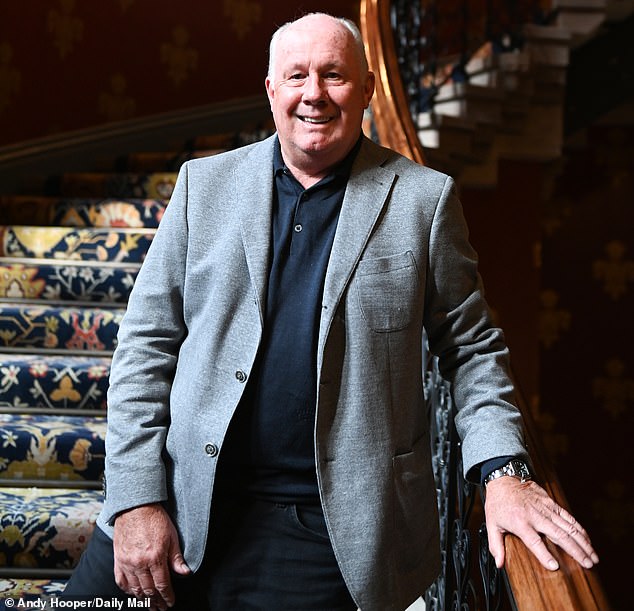 Now 65, Brady has an ambassadorial role and is looking forward to Sunday’s game with Spurs

He explains: ‘Arsenal need an identity because it’s not there but how do you compete when you are faced with Roman Abramovich at Chelsea or Abu Dhabi at Manchester City?

‘The only way is with good recruitment. Leicester and Liverpool have shown it. Arsenal have a question mark. The academy has done its bit with Bukayo Saka and Emile Smith Rowe, but the recruitment since Arsene’s total control was eroded has not worked.

‘Compare us with Liverpool and someone like Philippe Coutinho. They bought him for £10m and sold him for £100m. That helped buy Alisson and Virgil van Dijk. That hasn’t happened at Arsenal. That’s the gap.’

And with that, ‘Chippy’ (nicknamed because he once liked to eat them) is gone, off to an after-dinner Q&A session up the road. 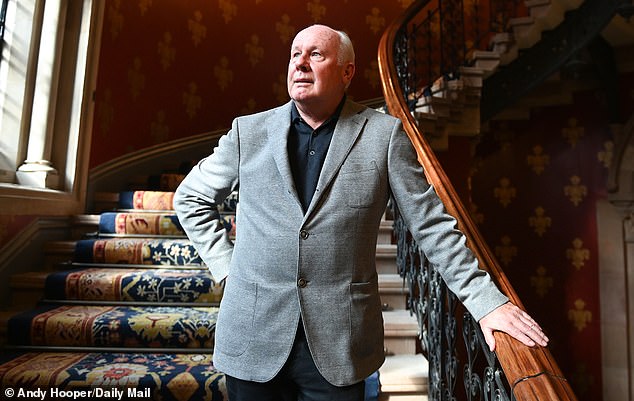 ‘I hope they don’t put me on the spot too much,’ he says. That was always harder than it looked.

‘To go to Arsenal, to have what I had with Juventus, to play for my country, to go back to the club as academy manager and help the club for 19 years. To work with Arsene Wenger. Yeah, I am lucky. Grateful, too.’