LG is designing interactive and wireless technologies for the homes of the future.

The South Korean-based company announced a 97-inch wireless television and transparent refrigerator with color-changing doors to fit your mood at the Consumer Electronics Show.

The new OLED M3 television’s design removes the need for cables and, instead, is powered through the company’s Zero Connect technology that broadcasts HDMI-quality signal up to 30 feet and several audio formats- it only features a single power cord.

The refrigerator, called MoodUp, is powered by a companion app that lets users choose from 22 colors for the upper door panel and 19 colors for the lower, allowing them to change the look of the fridge and their kitchen environment.

LG unveiled several other technologies during the Media Day event, such as different televisions that come with Paramount streaming, but its M3 and MoodUp stole the show this year.

The ‘home of the future’ is a space that provides dwellers with an interactive experience, wireless technology and a smart design. And these are what LG showed off Wednesday.

M3 is the first television to eliminate cords needed to connect other devices, such as speakers and streaming boxes.

The innovation, instead, features LG’s new Zero Connect Box that can be placed anywhere in the same room.

The box is designed with multiple ports for other devices and relays the audio and video signals wirelessly to the M3. 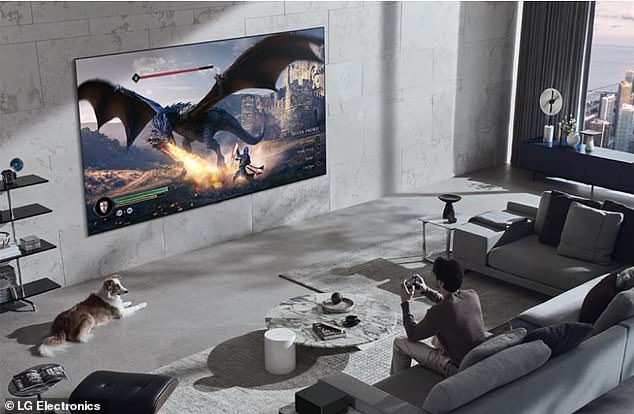 The new OLED M3 television’s design removes the need for cables and, instead, is powered through the company’s Zero Connect technology that broadcasts HDMI-quality signal up to 30 feet

LG said users can send up to 4K video at 120Hz, which is a necessary criteria for gaming and streaming.

And all of the features on the Zero Connect Box are voice-controlled.

Despite the massive display, M3 is designed to sit flush against the wall with no visible gap, which is a popular method of new televisions because owners can display artwork on the screen when it is not being used.

LG, however, did not reveal a full list of specs for M3 or the cost and when it will hit the market.

During the CES event, the electronics company went from the living room to the kitchen to show off the future of refrigerators.

Its MoodUp is designed with color schemes to match your mood and even the season, such as red and green for Christmas. 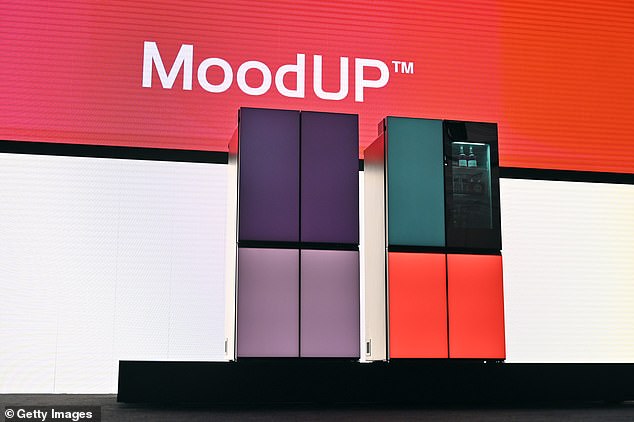 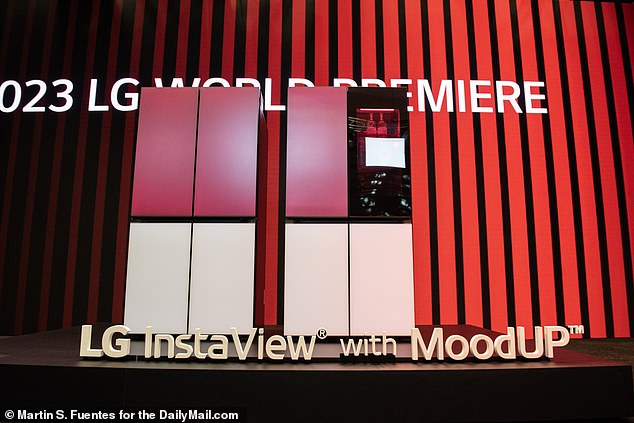 The refrigerator is also designed with sound via a built-in Bluetooth speaker that can be easily connected to a smartphone, tablet or laptop.

Users can match their mood – or the fridge’s current color or theme – with songs from their favorite music streaming apps or the Music Collection playlist on the ThinQ app.

And there is a feature that changes the panel colors to match the music.

LG has also designed the gadget to notify users when the door is left open too long. 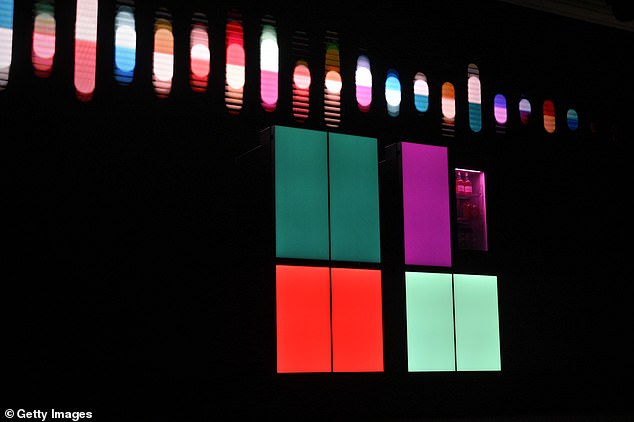 And when the colors are turned off, the doors are transparent

And MoodUP’s motion sensors detect when someone is approaching – both panels blink in welcome.

The colors, however, can also be changed to gray or white to match a more traditional look or be eliminated, so the doors are see-through.

Lyu Jae-cheol, president of LG Electronics Home Appliance & Air Solution Company, said, ‘ We at LG have always found exciting, new ways to move the customer experience forward and we are proud to do it again with the brand-new MoodUP refrigerator.

‘Bringing color, music and convenience to the kitchen, and incorporating LG’s cutting-edge technologies and innovative design features, this unique refrigerator demonstrates our continuing commitment to delivering a better life at home.’

LG unveils its WEIRDEST TV yet: Bizarre ‘StanbyME’ features a 27-inch screen on a stand that you can wheel around the house