Lex Greensill has broken his silence over a bitter planning dispute that threatens his plan to establish a sustainable farm near his Cheshire home.

As liquidators continue to pick over the wreckage of his business empire, the disgraced Australian financier has been bogged down in a three-year battle with Cheshire West and Chester Council.

The row revolves around Shotwick Park, 502 acres of lush English countryside bordering his country pile in the village of Saughall.

Back to nature: Lex Greensill wants to convert land bordering his home in the village of Saughall into a regenerative farm

Greensill wants to convert the land into a regenerative farm, planting a mixture of crops including broccoli, cauliflower, cabbage and kale.

Having grown up on his family’s sugar cane and melon farm near Bundaberg in Queensland, he has described his desire to give his children a similar experience.

He has also said he is motivated by a desire to give something back to the local community and do his bit to tackle climate change.

Some 25 years after leaving the family farm to seek his fortune, his dream of tending the land has been threatened.

The implosion of his murky supply chain finance firm Greensill Capital has fuelled distrust among villagers and councillors.

At an emergency meeting last month, the local parish council withdrew its support for his plans while it seeks fresh guarantees.

Doubts are being raised about Greensill’s intentions, with some locals fearful that he may be plotting to sell some of the land to property developers. In an interview with the Australian Financial Review the 46-year-old said he has been ‘hurt’ by the speculation.

The local parish council in Saughall attempted to allay the concerns of residents late last year by demanding the sale contract include a clause which prevents the land from being developed.

But even this guarantee has failed to satisfy everyone, with the parish council split between those who back Greensill’s plans, and those who oppose them.

‘There is a question in the village that because Greensill Capital went bust, can I be trusted to do what I said?’ he said, nearly two years on from the collapse of his firm.

‘It hurts that people would think that, but that’s what is worrying people and that’s why I agreed to a covenant immediately.’ 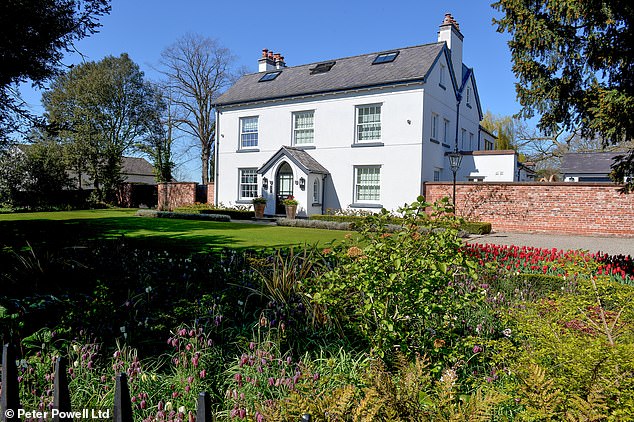 Row: Lex Greensill wants to convert the ex-vicarage in Saughall, Cheshire (pictured), into a regenerative farm

There are also nagging concerns about how he can afford the estimated £5million-plus purchase price – let alone the money that will then have to be ploughed into the farm and conservation project – given his business went bust owing creditors billions.

The report also revealed the Australian parent company had just £1.5million in the bank at the end of April last year. Lawsuits and fraud allegations from creditors – denied by Greensill himself – continue to hang over his failed business.

Meanwhile, he has assured locals in Saughall that the money for the farm and conservation project will come from his family farm in Bundaberg, which has gained a stranglehold on the local sweet potato business.

But this raises questions too. For years, locals have suspected the farm’s expansion was funded by Greensill Capital.

Greensill has been accused of shielding money from creditors by funnelling cash from his failed financial business into the farming operation, run by his brother Peter. Again, the Greensill family has denied this, maintaining the two businesses are separate.

Greensill’s initial interest in the land stemmed from a desire to preserve the view from his family home in Saughall he shares with his English doctor wife Vicky and two sons. Shotwick Park had been leased by Cheshire West and Chester Council to local farmers.

When it emerged the council wanted to sell, Greensill was anxious the land did not fall into the hands of property developers.

He wanted to buy the fields across the lane from his house to make sure his family continued to enjoy an unimpeded view of the Welsh mountains.

But the council was not prepared to sell such a small area of land, so Greensill decided to buy all of it as a conservation project.

There may be some who wish Greensill well with his latest venture. Others may believe a lengthy planning dispute with the district council is the very least he deserves.