EXPRESS INFORMER > Health & Medicine > Less than HALF of people in parts of England are vaccinated… how many are jabbed in YOUR area?

Fewer than half of people living in parts of London, Birmingham and Leeds have had their first Covid jab, official statistics show.

Harehills South, a neighbourhood of Leeds famed for crime and anti-social behaviour, has the lowest uptake rate. Only 38.5 per cent of over-12s living in the district have already accepted their first dose invite.

Rates stand below the 50 per cent threshold in 13 other wards dotted across the country.

For comparison, uptake rates are above the 90 per cent mark in a fifth of England’s 6,700-plus districts.

Experts today claimed the ‘disappointing’ data — which MailOnline has placed into a handy search tool that you can use — showed No10’s jab strategy did not succeed in persuading the most deprived areas to come forward for a jab.

Britain’s landmark inoculation drive has been credited with saving tens of thousands of lives, keeping pressure off of the NHS and consigning the darkest days of the pandemic to history.

Vaccine data, compiled by the UK Health Security Agency, is based on the percentage of over-12s who’ve been jabbed.

Uptake figures are based on population data from the National Immunisation Management Service, which holds inoculation records for the entire country.

UKHSA bosses break the statistics down into several geographical regions, including one known as middle-layer super output areas. MSOAs are home to around 8,000 people each.

WHAT PARTS OF ENGLAND HAVE THE LOWEST COVID VACCINE UPTAKE?

Harehills South has the lowest first jab uptake rate (38.5 per cent), followed by Waterloo Road in Wolverhampton (44.4 per cent), and Stamford Hill North in Hackney (46.1 per cent).

Other areas that fall below the 50 per cent threshold include Headington in Oxford (46.3 per cent), Ayresome in Middlesbrough and South Tottenham in Haringey (both 47.9 per cent).

For comparison, first dose uptake rates stand as high as 94.7 per cent in Whickham in Gateshead and Whitley Bay North in North Tyneside.

The overall figure for the UK — which began rolling out jabs in December 2020 — sits at 92.1 per cent, according to No10’s coronavirus dashboard.

However, the Government itself acknowledges how the uptake rates can be slightly out of sync because the NIMS population statistics are not perfect.

Professor Paul Hunter, an epidemiologist at the University of East Anglia, told MailOnline it is ‘definitely disappointing’ that there are still pockets of the country with low uptake, despite ‘overall high vaccine coverage’.

He said: ‘I suspect many of these areas are areas of relatively high deprivation and/or have a high proportion of ethnic minorities.

‘It is disappointing that the UK vaccine effort did not manage to do better in persuading these communities to take up the vaccine.’

There is not likely to be ‘much increase’ in vaccine coverage among the least immunised parts of the country in the coming weeks and months, Professor Hunter said.

He added: ‘Now we are getting past the Omicron peak, the large majority of unvaccinated individuals have already had the infection and will have acquired immunity so we are not at the beginning with these populations.

‘I would still encourage people to still come forward for vaccination even if they have had an infection as hybrid immunity does seem to offer the best protection.’

Dr David Strain, a medical lecturer at the University of Exeter, told MailOnline the low uptake rate in some parts of the country is likely down to the perception of the vaccine, with ‘insufficient efforts’ made to make information about the benefit and safety of the jab accessible to all.

He said it is ‘worrying’ that the lowest uptake has occurred in the regions with the most ethnically diverse populations, as these are ‘the same populations that appear to have done worse out of acute Covid infections and therefore have the most to gain’. 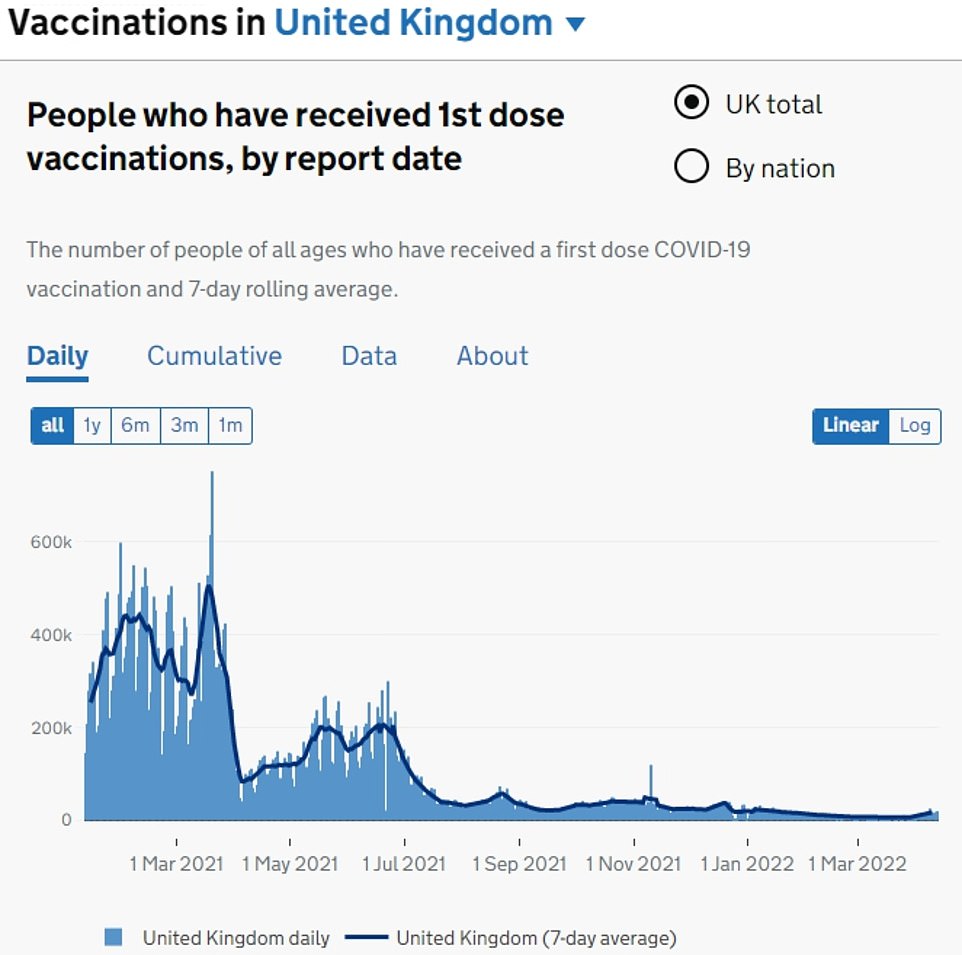 Nearly 53million first Covid jabs have been dished out in the UK since the pandemic began, with 92.1 per cent of over-12s now having had their first dose since the first was administered on December 8 2020 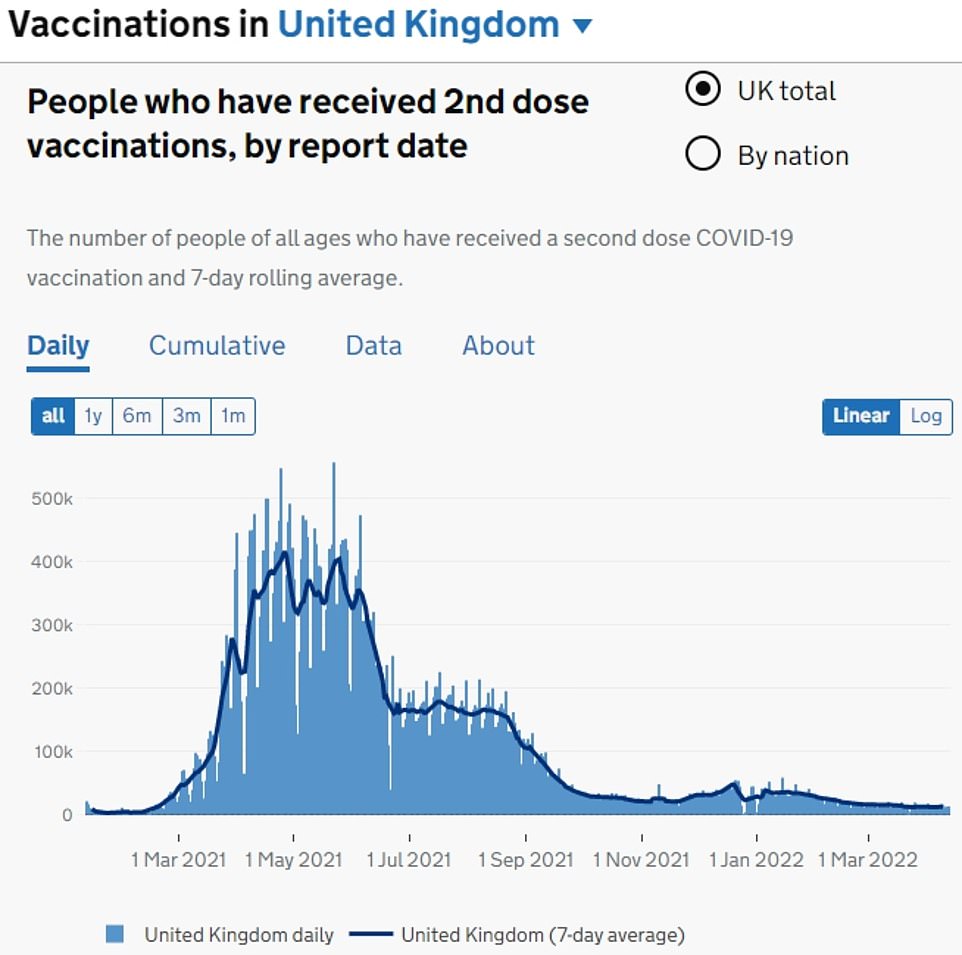 Some 49.6million people, or 86.2 per cent of over-12s, have come forward for their second dose, which is given four weeks after the first injection 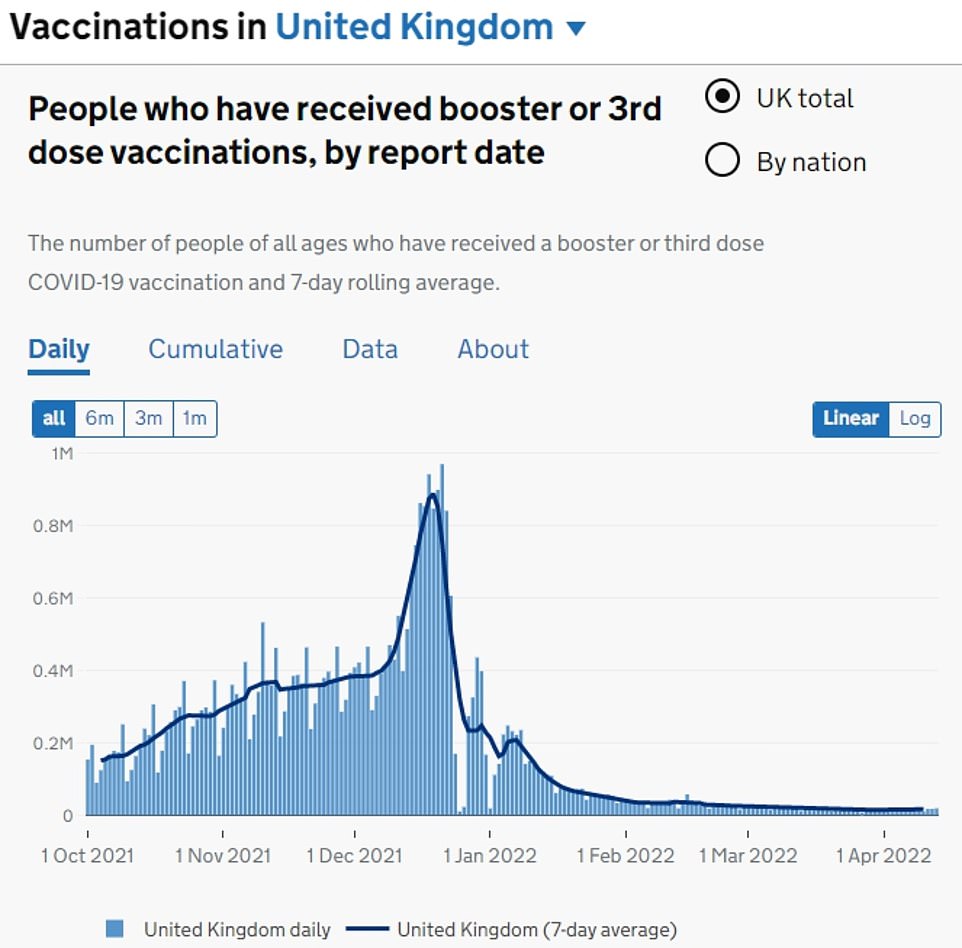 More than 39million booster doses have been given to Britons, with around 970,000 doses given in a single day in December as the country bolstered its immunity in the face of the Omicron wave 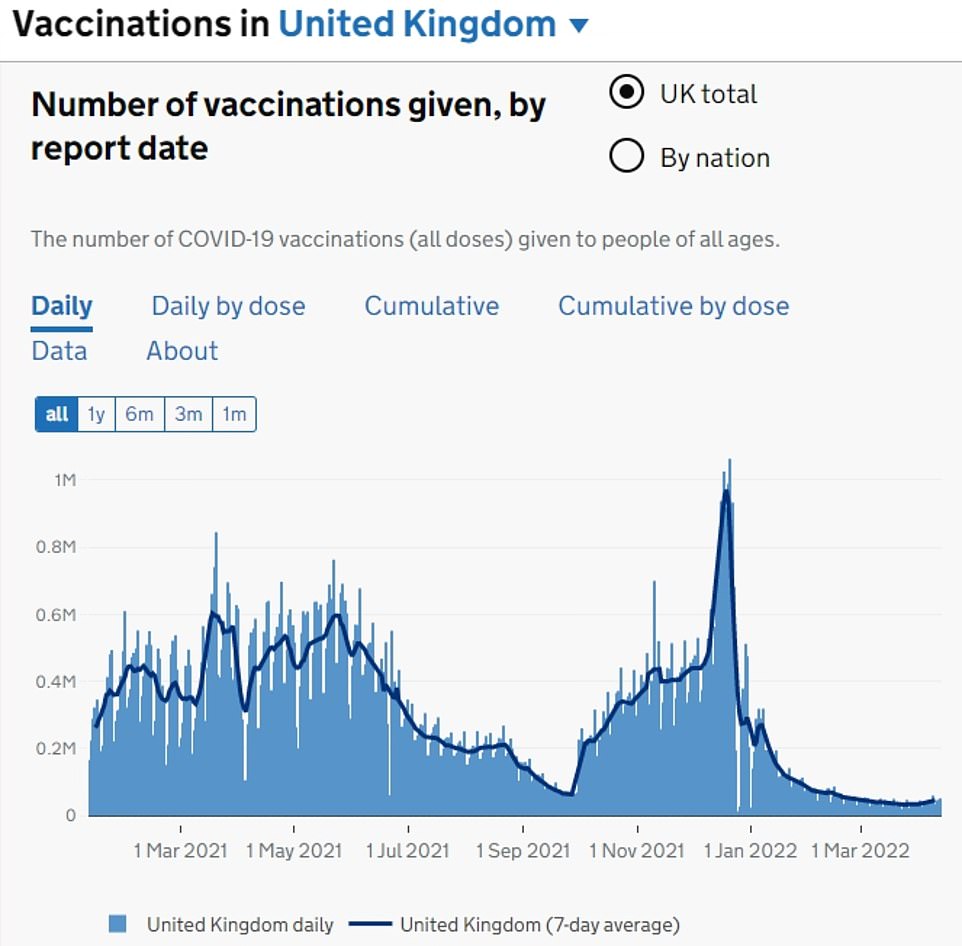 Around 45,000 Covid vaccines were dished out per day in the week to April 10, as thousands of Britons continue to come forward for their first, second and third dose, as well as getting jabbed as part of the spring booster campaign and the rollout to five to 11-year-olds 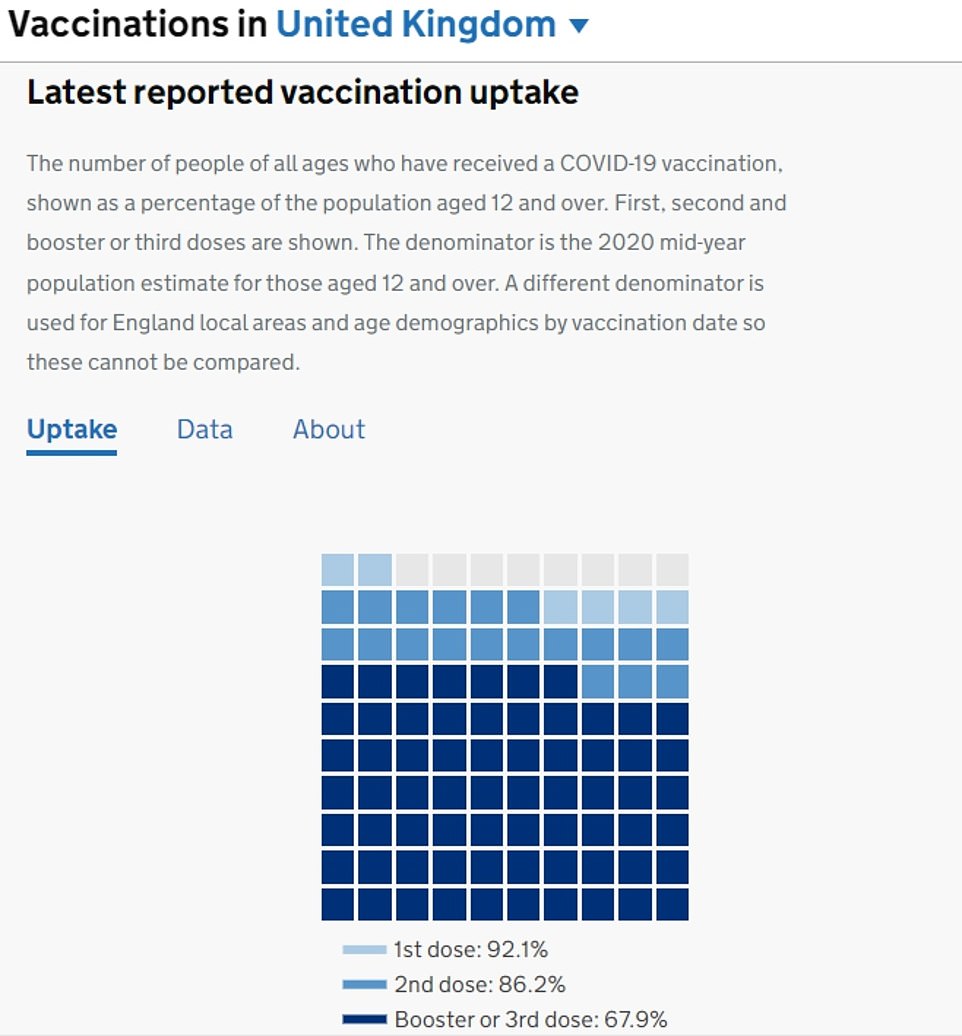 More than nine in 10 over-12s in the UK have had their first dose, 86.2 per cent are double-jabbed and over two-thirds are boosted

‘As long as the rhetoric continues that ‘Covid is over’, however, it will remain difficult to persuade these populations that have a historic distrust of rapidly developed treatments that this is both safe, efficacious and remains the best way to keep your entire family safe,’ Dr Strain said.

With so many cultures celebrating, such as Easter, Ramadan and Passover, it would be ‘an ideal time to call on religious and community leaders to remind that Covid it is by no means over and the vaccines are the single best source of protection’, he added.

Vaccines have been credited for drastically blunting the threat of SARS-CoV-2, the coronavirus behind the Covid pandemic.

Before jabs came onto the scene, Britain suffered numerous days where over a 1,000 people were dying from the virus.

Top scientists have also credited the numerous waves Britain has had to endure and the milder nature of Omicron for the country being able to drop all restrictions and ‘Live With Covid’.

Britain is currently rolling out fourth doses to over-75s, care home residents of all ages, and people with weakened immune systems like some cancer patients.

These groups are eligible for the spring booster if it has been six months since their first booster shot.

Health chiefs are also planning to dish out another round of booster doses this autumn. It could see millions more adults offered an extra vaccine.

The vaccination rollout was expanded earlier this month to include five to 11-year-olds in England. Scotland, Wales and Northern Ireland already offered the jabs to this age group.

No10’s vaccine advisers said the move will stop ‘a very small number of children from serious illness and hospitalisation’.