Leona Lewis showed off her bourgeoning baby bump as she shopped for organic groceries at the high-end Erewhon Market in Los Angeles on Friday.

The pregnant singer, 37, who is expecting her first child with her husband Dennis Jauch, 33, looked radiant while strolling in a black midi dress.

She threw a casual white shirt over the ensemble and framed her face with a pair of tortoise-shell sunglasses while carrying her purchases.

Emerging: Leona Lewis showed off her growing baby bump in a black midi dress as she shopped for organic groceries in Los Angeles on Friday

Keeping things casual in a pair of white trainers, she tied her gorgeous light brown curls into a ponytail and later appeared to be enamoured with her phone.

The outing comes after Leona revealed she was ‘unable to leave the house’ due to being ‘severely ill’ during her ‘challenging’ first trimester.

The former X Factor winner shared the news as she enjoyed a weekend away after recovering from her illness.

She showed off her blossoming baby bump in a navy bikini top and denim shorts while paddle boarding with her beloved dog near LA. 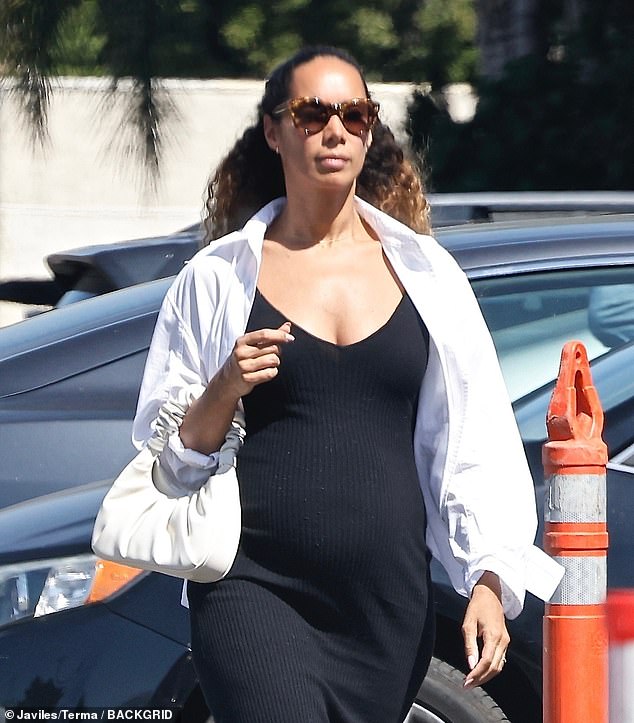 Beauty: The pregnant singer, 37, looked radiant while strolling through a car park

Exciting times: She is expecting her first child with her husband Dennis Jauch, 33, 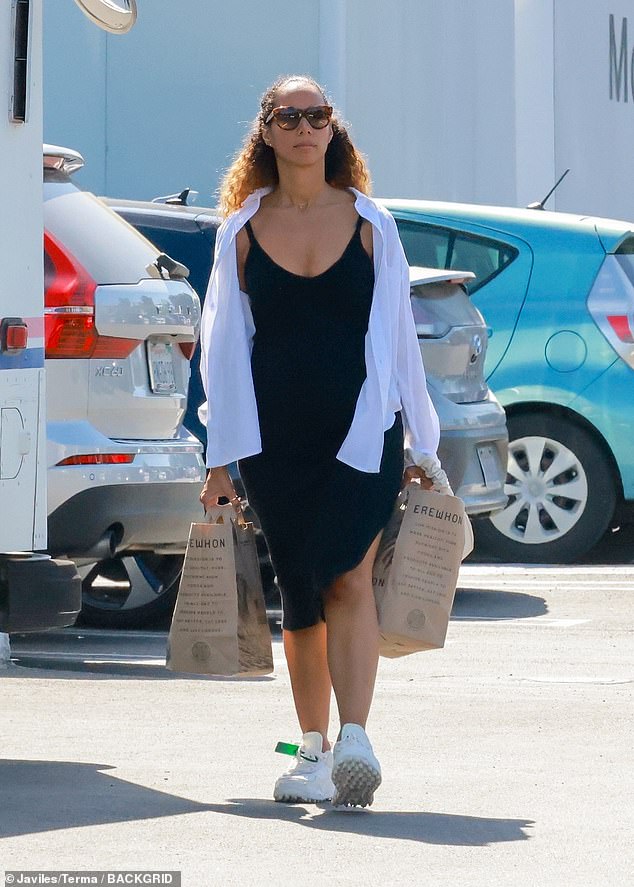 Stylish: She threw a casual white shirt over the ensemble while carrying her purchases

Leona completed her look with a white shirt and sunhat as she caressed her tanned tummy.

In a lengthy caption, she opened up about her health struggles, writing: ‘Spent time in nature with the pups and the bump this weekend.

‘I had a really challenging first trimester, I’ll share more at some point for anyone who is going through the same.

‘But I was severely ill and unable to leave the house. So promised myself when I could get out I would spend more time in nature. She’s truly healing x.’ Sunny: The Bleeding Love hitmaker framed her face with a pair of tortoise-shell shades 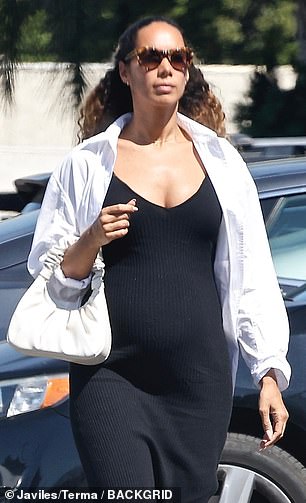 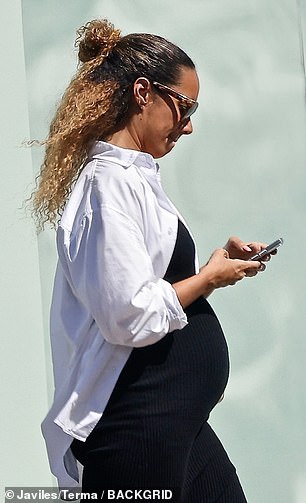 Stunning: She tied her gorgeous light brown curls into a ponytail and later appeared to be enamoured with her phone

Leona recently showed off her growing bump in a black dress as she posed for a radiant shoot – and revealed her baby news with husband Dennis.

She wrote: Can’t wait to meet you in the Summer’ with friends and fans rushing to congratulate her.

Sources recently told The Sun that Leona passed the 12-week mark and said the ‘over the moon’ couple told their family and friends their news at the beginning of the year.

They added: ‘They [Leona and Dennis] can’t wait to welcome their new arrival and to become a family of three.’ 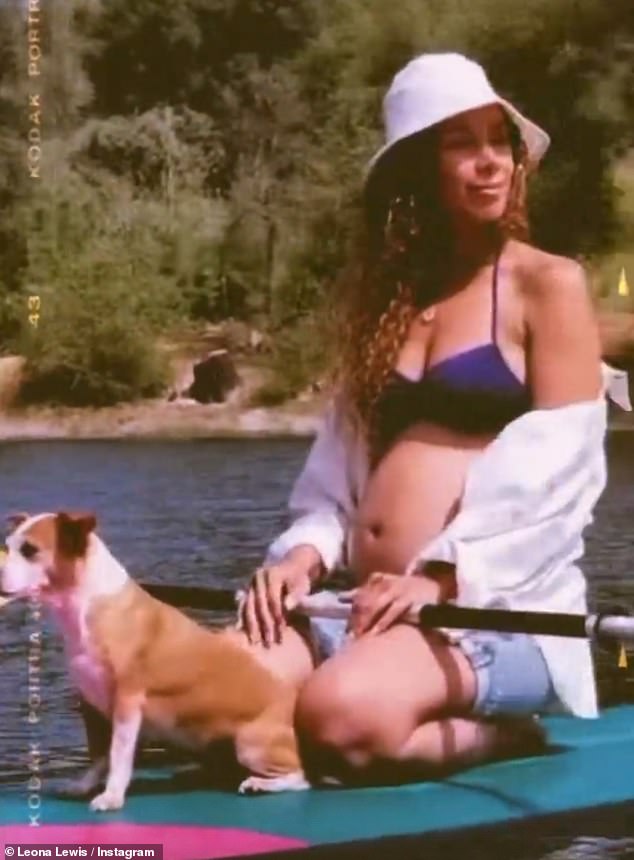 Candid: It comes after Leona revealed that she was ‘unable to leave the house’ due to being ‘severely ill’ during her ‘challenging’ first trimester

Honest: In a lengthy caption, she opened up about her health struggles, explaining that she was ‘severely ill’ as she promised to reveal more soon to help others going through the same

The X Factor winner married choreographer Dennis in a lavish ceremony in Tuscany, Italy, in 2019 after 10 years of dating.

In November 2018, notoriously private Leona revealed she was engaged to her long-term love by sharing a picture of her eye-catching diamond ring while on holiday in San Juan.

Just one year after tying the knot with Dennis, Leona revealed that she wanted children and said she would like to adopt because of her mother’s experience growing up in a children’s home.

She told Stella magazine: ‘I do want children, but Dennis and I have also talked about adopting.

‘My mum grew up in a children’s home. No one adopted her as a child, and I would very much like to adopt.

‘But I’m still figuring things out. If it was up to my husband, we would have had kids yesterday.’

In 2013, Leona said that she had always wanted to get married in her 20s but then realised that she was ‘not ready’ when she reached her late 20s. 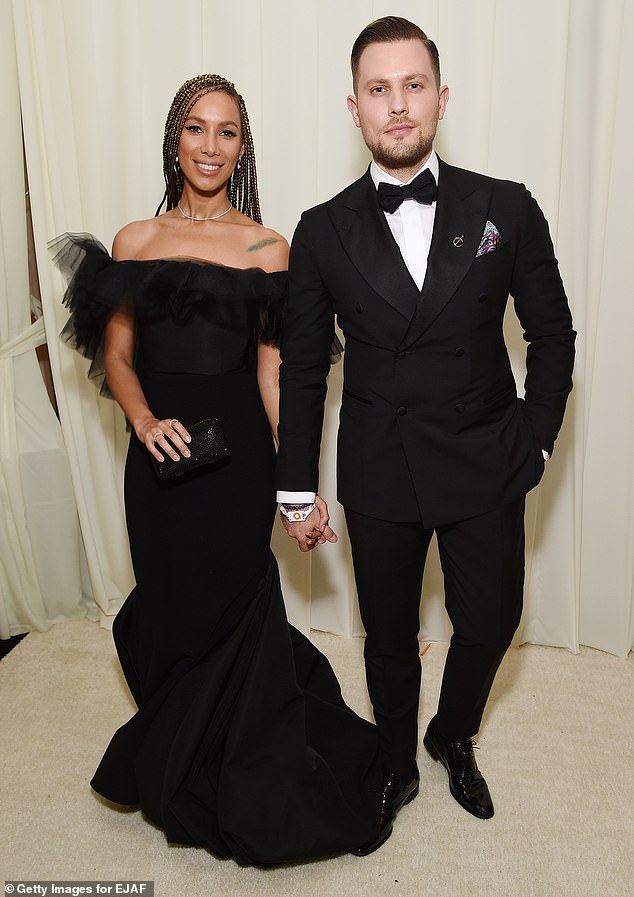 Love: The X Factor winner married choreographer Dennis Jauch in a lavish ceremony in Tuscany, Italy, in 2019 after 10 years of dating