She welcomed her two children with fiance Andre Gray almost a year ago.

And on Monday night, Leigh-Anne Pinnock, 30, took to Instagram where she shared a cute photo of herself doting on her twin babies in the garden.

Sitting on a variety of throws, the Little Mix star planted a kiss on one of her tiny tots as she held them in her arms, and used white heart emojis to hide their faces.

Mum life: On Monday night, Leigh-Anne Pinnock, 30, took to Instagram where she shared a cute photo of herself doting on her twin babies in the garden

Make-up free Leigh-Anne, who hasn’t revealed the names or genders of her twins, looked effortlessly chic in a blue bikini top and relaxed grey shorts, with her hair slicked back into a bun.

She gushed alongside her upload: ‘Really don’t know what I did to deserve you both, you make everything so much better,’ while her future husband Andre wrote beneath: ‘Me neither.’

Last week, Leigh-Anne shared a sweet video of her children on Instagram as she marked 11 months since their birth.

The singer posted footage of the tots playing with a baby walker in matching pjs as she gushed about their growing bond. 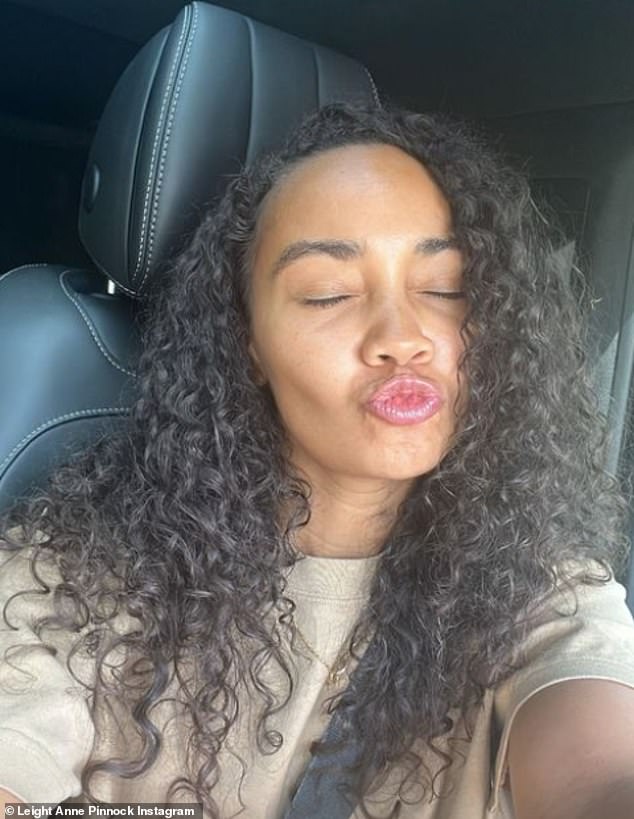 Milestone: Last week, the Little Mix star shared a video of her children on Insta as she marked 11 months since their birth

Setting the sweet black and white footage to the song Stand By Me, the video showed the twins holding onto a walker together as they took some wobbly steps around the room.

‘The bond is growing and it’s melting my heart, I can’t believe my cubbies are 11 months mannnn ❤️’ the proud mum captioned the post.

She also reposted a message from her sister Sairah which read: ‘You are bossing being a mum, so proud of you.’ 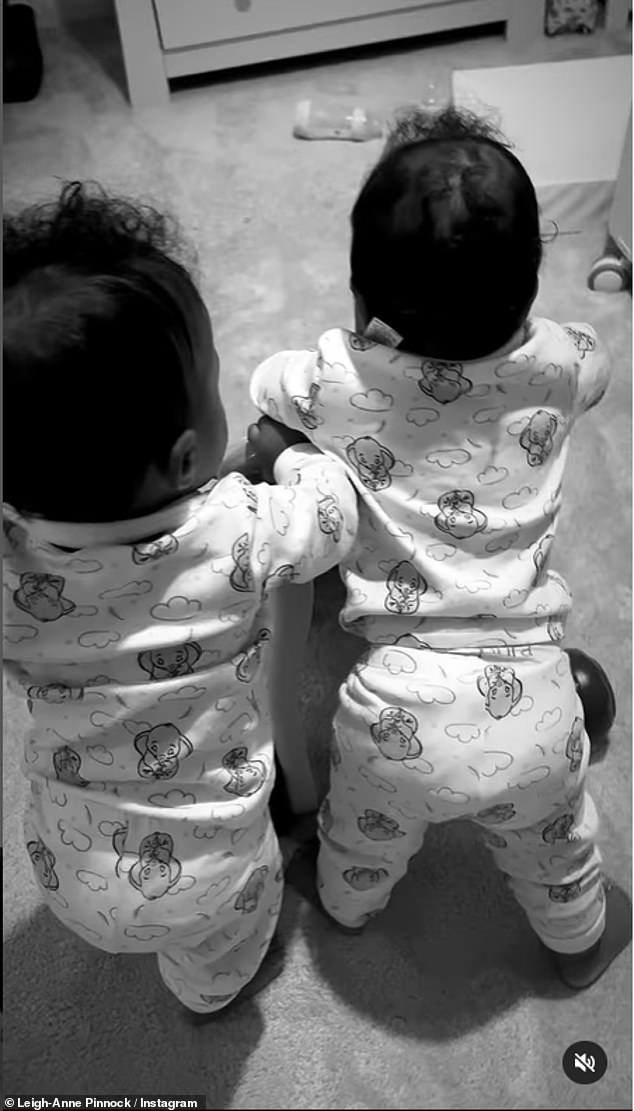 Mum: The singer, who hasn’t revealed the names or genders of her twins, posted footage of the tots playing with a baby walker in matching pjs as she gushed about their growing bond

While Perrie has chosen to share her son’s name, Leigh-Anne previously said she hopes to keep her children’s names and genders ‘as private as possible for as long as possible,’ adding: ‘It was a decision we made at the time because [the attention] was freaking me out a little bit.’

The star sent fans wild last week as she took to Instagram, jesting that her wedding to fiancé Andre had already taken place. 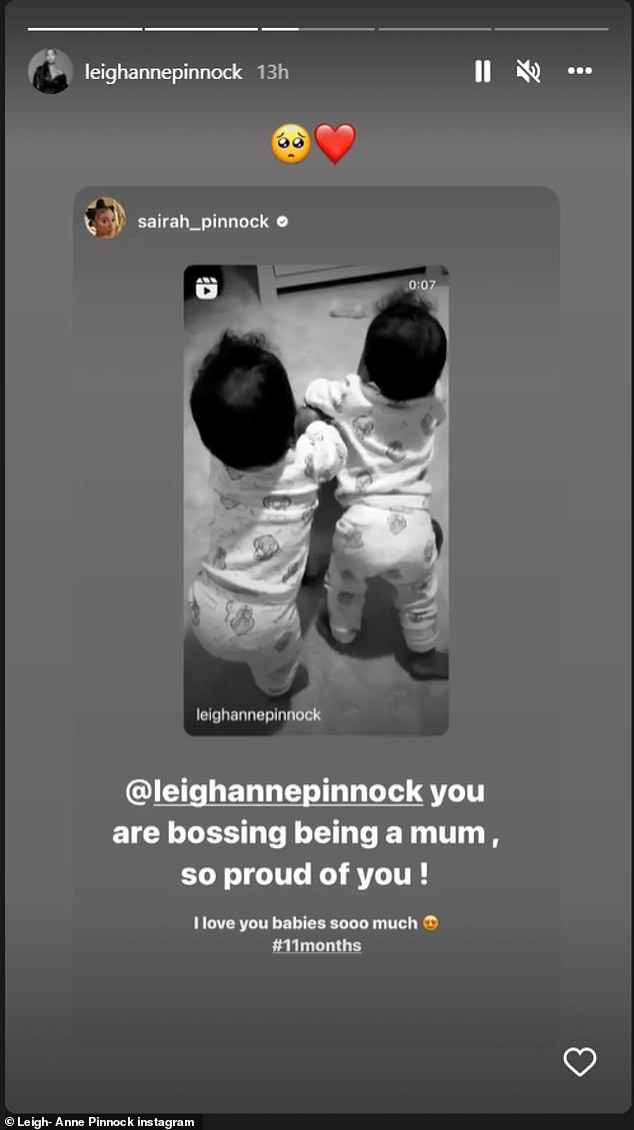 Proud: She also reposted a message from her sister Sairah which read: ‘You are bossing being a mum, so proud of you’

Posting a carousel of snaps in a flowing white maxi dress, the Little Mix singer wrote: ‘Just Marri…kidding’ alongside a laughing emoji.

In the shots, the mum-of-two sported a flowing white maxi dress with a centre slit and ruched detail, alongside a plunging neckline on the satin number. 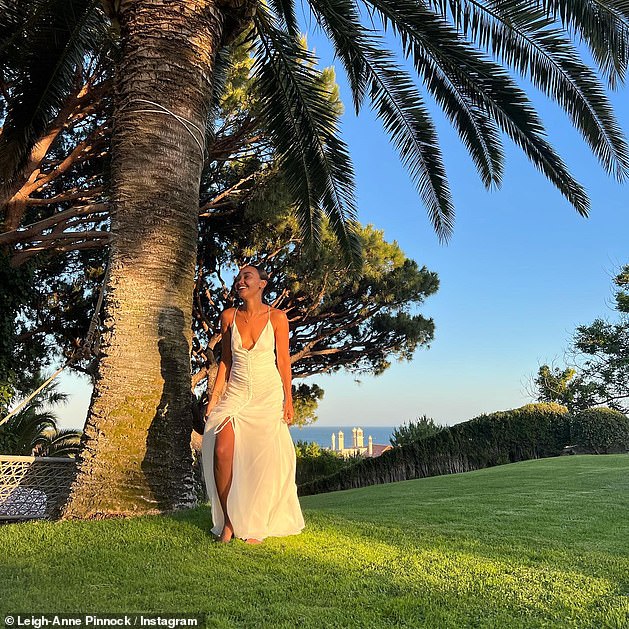 ‘You had us!’: Leigh-Anne sent fans wild as she took to Instagram last week, jesting that she had married her fiancé Andre Grey

Leigh-Anne and Andre have been engaged for two years and are said to have chosen the Caribbean due to them both having British and Jamaican heritage.

With reports that they will tie the knot in Jamaica, a source told The Sun: ‘Leigh-Anne and Andre have been planning their special day for months.

‘They chose to marry in Jamaica because of their family ties to the island, which they think of as their second home.’