Leicester could be the first British city to go into a local lockdown after a spike in coronavirus cases there in June as the Government said it is now offering the council there special support to cope with the virus.

The city could face stricter lockdown rules as soon as next week if the Covid-19 situation does not come under control, meaning it could miss out on the mass easing expected for next Saturday, with pubs reopening.

There have reportedly been a surge of 658 in cases in just two weeks this month in the East Midlands city, which is home to around 340,000 people. The city had 271 Covid-19 deaths up to June 12.

The Department of Health said it has sent extra testing units to Leicester to try and get on top of the virus and urged residents there to be strict about social distancing and washing their hands.

Prime Minister Boris Johnson this week announced the biggest relaxation in lockdown rules since March but said he will bring them back if the virus starts to surge out of control.

‘Wherever there is a local outbreak, whether in Ashfield or Angelsea, we will empower the local authorities to quarantine everyone who has got it, test back to the moment of infection and make the necessary closures,’ he told the Mail on Sunday.

The Mayor of Leicester, Sir Peter Soulsby, has said there was no immediate threat of a lockdown and that suggestions it was on the cards were ‘speculative’. 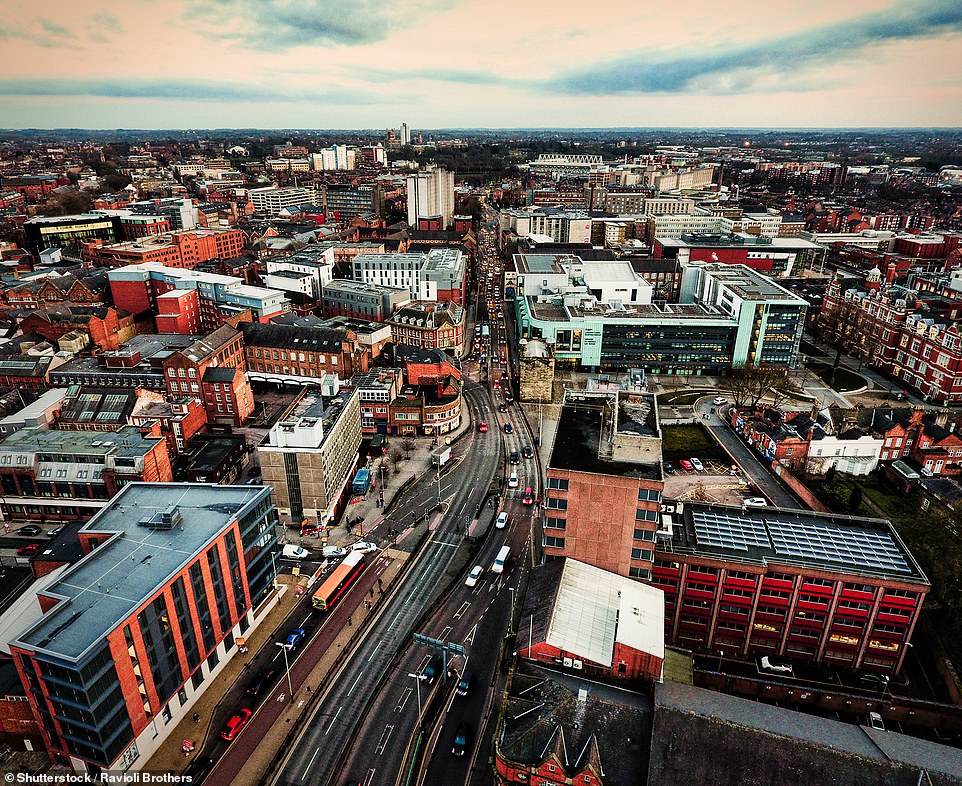 A Department of Health spokesperson said: ‘We are supporting the council and local partners in Leicester to help prevent further transmission of the virus.

‘We have deployed four mobile testing sites and made thousands of home testing kits available, to ensure anyone in the area who needs a test can get one.

HOW COULD LOCAL LOCKDOWNS WORK?

Local lockdowns could be imposed on whole towns if there are regional flare-ups of coronavirus cases , Matt Hancock confirmed in May.

The Health Secretary said the ability to tighten restrictions in individual regions will be part of the NHS test, track and trace system, which creates networks of at-risk people around every person who tests positive for the coronavirus.

Local lockdowns could lead to schools, businesses or workplaces being closed in areas with high prevalence of infection, according to the government’s road map on easing lockdown restrictions.

Mr Hancock said in a Downing Street press briefing: ‘We will have local lockdowns in future where there are flare-ups and we have a system we are putting in place with a combination of Public Health England and the new Joint Biosecurity Centre, along with the local directors of public health who play an absolutely crucial role in the decision-making in the system, to make sure if there is a local flare-up there is a local lockdown.’

‘NHS Test and Trace will contact anyone testing positive to help them identify their recent contacts and advise who may have been near to someone with the virus to stay at home to prevent the spread.

‘We urge the people of Leicester to continue to practice social distancing, wash their hands regularly, get tested immediately if they have symptoms and follow the advice they receive if contacted by NHS Test and Trace. This advice is there to protect communities and save lives.’

Concerns about the situation in Leicester come as police were yesterday forced to control traffic chaos in the county as crowds flocked to an annual horse fair in Mountsorrel.

The area, off the A6, was overrun with heavy traffic as hundreds of travellers descended on a small field which was hosting the annual horse fair.

Police were seen attending the area as rows of cars blocked roads and pedestrians were seen walking across busy carriageways.

It is unclear whether the event was authorised by officials but it’s currently illegal to meet outside in groups of more than six people from other households.

Data shows that more than 1,000 people have been officially diagnosed with Covid-19 since the outbreak began, and 271 had died by June 12.

Hospitals in the Midlands region have seen the most deaths of any region outside of London, with 5,707 deaths up to yesterday, compared to 6,090 in the capital.

A local lockdown could mean Leicester and smaller areas around it could be denied the new privileges set to be granted to the rest of the country next Saturday, July 4, which will include the reopening of pubs and restaurants.

People will also be allowed to visit the homes of family and friends where they will be able to waive social distancing and sleep overnight, for the first time since March. 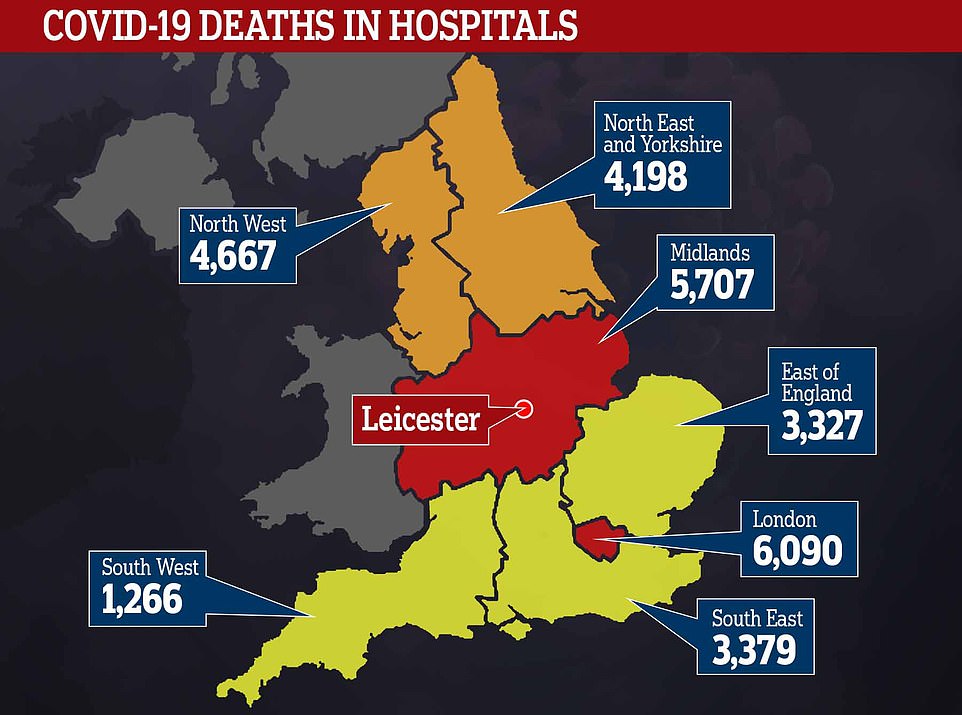 Hospitals in the Midlands have been the worst affected outside of London, NHS England data shows, with 5,707 deaths by yesterday, compared to 6,090 in the capital

But Leicester could lose out if officials decide a local lockdown is needed there.

Other restrictions could also be re-introduced, such as people being told not to meet up with people from outside of their households.

The Mayor of Leicester, however, hit back against growing claims that a lockdown is imminent.

‘We know that the number of hospital admissions is going down locally and mercifully so is the number of deaths. That is the only firm data we have.

‘After weeks of asking, on Thursday we [the council] finally received information from the Government that will help us know much more about which parts of the city might have a particular issue with transmission.

‘We are working through that data this weekend. Until we have done that we do not know what interventions might be required.’ 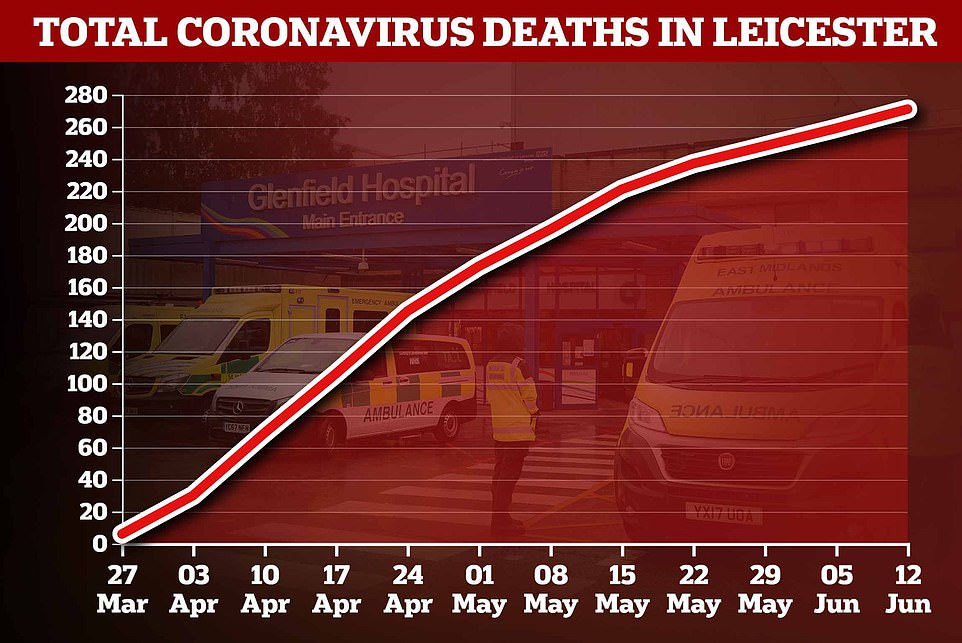 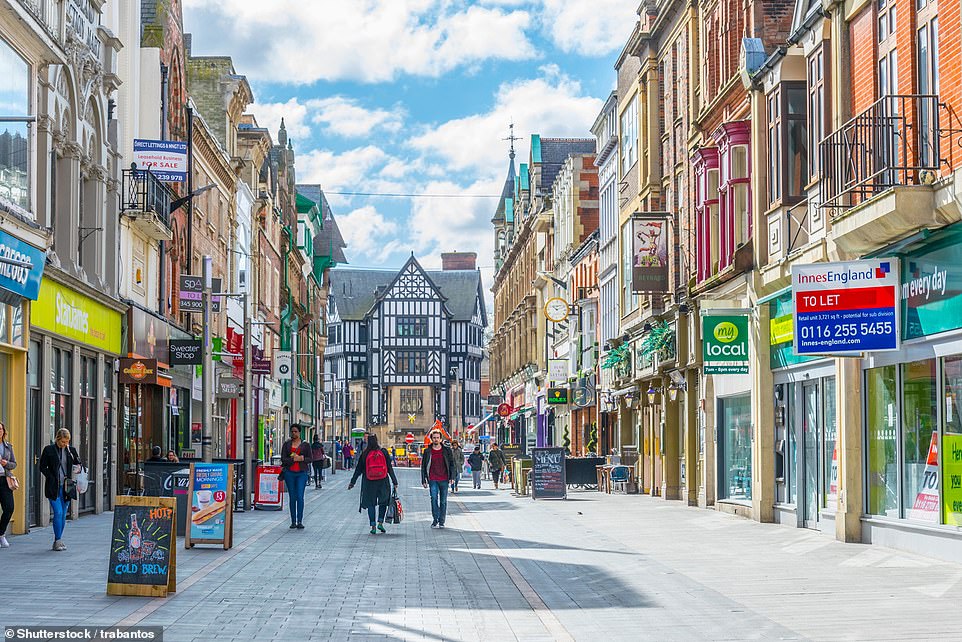 A local lockdown could mean Leicester and smaller areas around it could be denied the new privileges set to be granted to the rest of the country next Saturday, July 4, which will include the reopening of pubs and restaurants (stock image)

Home Secretary Priti Patel acknowledged on the Andrew Marr show this morning that Leicester was on high alert.

She said: ‘There will be support going into Leicester,’ and added: ‘With local flare-ups it’s right that we have a localised solution in terms of infection control, social distancing, testing and many other tools that… will come together to control the virus and stop the spread.’

There are also concerns that Leicester could see a large number of deaths if there is a significant second outbreak of Covid-19 there, because of its large ethnic minority population.

Scientific studies and a report by Public Health England found that black, Asian and minority ethnic people are at a significantly higher risk of dying than white people.

Around 14 per cent of people in Leicester are of Asian ethnicity, according to local data, which is more than triple the less than five per cent in England as a whole.

Other local lockdowns could be targeted at especially busy areas where crowds of people have gathered.

The coast in Dorset, for example – Bournemouth beach, in particular – saw hundreds of thousands of tourist visitors this week amid scorching sunshine.

The council in the area declared a ‘major incident’ because the area was so busy and police and politicians urged people to stay away from the seaside resort. 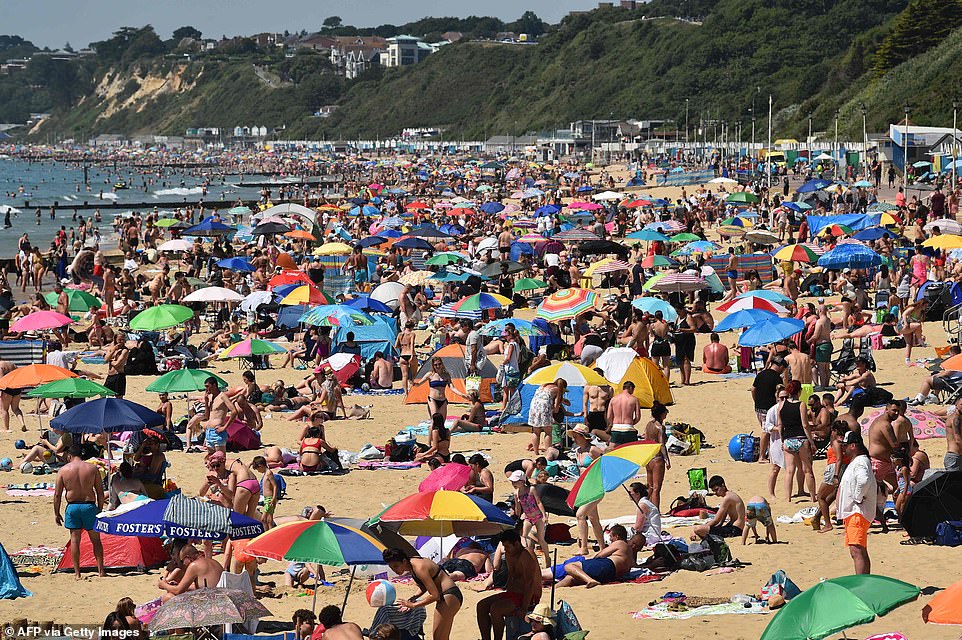 Police bosses warned Brits need to take ‘more personal responsibilities’ as the number of tickets handed out in the two weeks to June 22 fell to their lowest level. Thousands descended on Bournemouth beach this week

Police have also had to break up parties and raves attended by hundreds in London and disperse crowds forming in Liverpool after the city’s football team won the Premier League and fans celebrated in the street.

Prime Minister Boris Johnson said in his final daily Downing Street briefing this week that he would not hesitate to pull the ‘handbrake’ on easing lockdown if the virus starts to bounce back.

In an interview with the Mail on Sunday today he called on the British people to exercise restraint when pubs, restaurants and hotels open on July 4.

He warned that if the crowded scenes on beaches during last week’s heatwave were repeated he would not hesitate to order the micro-lockdown of individual towns.

Describing the coronavirus crisis as ‘one of the biggest challenges this country has had to face in 75 years’, Mr Johnson said: ‘The Government has done some things right, but the biggest thing of all was the public doing it right.

‘I say to those people who are going out in large groups – you may think that you are immortal, that you won’t be a sufferer, but the bug you carry can kill your family and friends.

‘‘We want to get to a world where we are as close to normal as possible as fast as possible. I don’t want a second lockdown.’