Legoland has been slammed after video showed families packed on to a terrace to watch a performance with no social distancing and few wearing face coverings.

The popular resort in Windsor, Berkshire, was branded ‘not good enough’ after footage showed youngsters at a Halloween dance show.

The event lasted up to 15 minutes, with good weather and the half-term meaning it was at full capacity, according to the company.

The popular resort in Windsor, Berkshire, was branded ‘not good enough’ after footage showed youngsters at the site where the ‘Return to Skeleton Bay’ show

Craig Sturgess from Southampton posted the clip during his time at Legoland on Sunday.

The father, who had stayed in a nearby hotel that night after watching Southampton beat Everton, wrote: ‘LEGOLAND today….. Can’t go to football stadiums though.’

His video showed children and parents sitting close together on four rows at an amphitheatre in the park.

Some appear to be singing while one child dances to music blaring out of speakers at the front of the venue.

It was not immediately clear whether a performance was underway if the video was taken before or after a show. 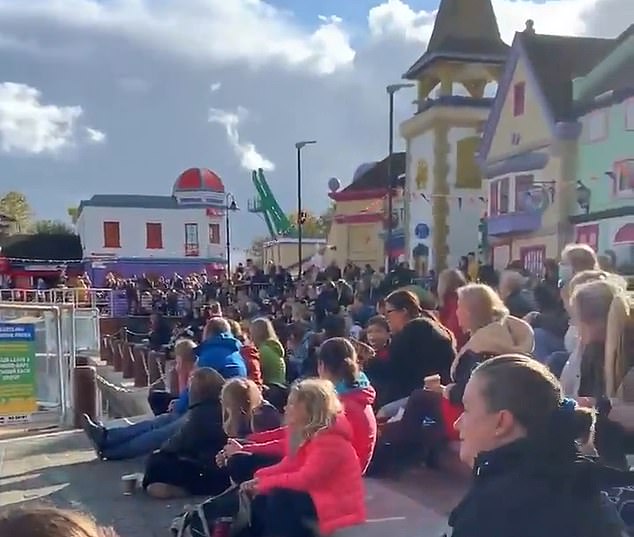 Social media users were quick to criticise Legoland, with one accusing it of putting ‘money ahead of safety’.

One man commented: ‘Clearly too many people are being allowed in! They care more about money than safety.’

Another wrote: ‘Where are the Covid inspectors shutting Legoland Windsor down for not giving a s*** whilst people are being fined for seeing their families?’

One added: ‘He has a point, bit of a poor show from @LEGOLANDWindsor with the social distancing!’

A woman put: ‘I was there in the summer and complained about how busy it was. Too many people you cant even distance on the paths.’ 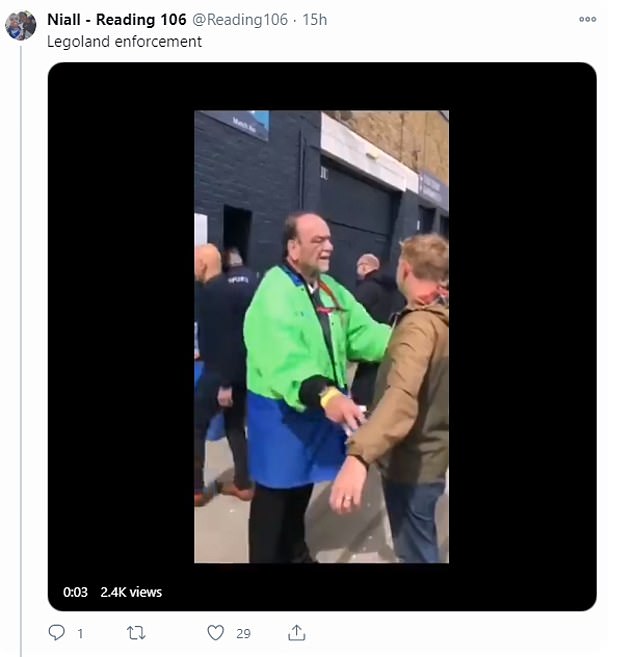 Another said online ‘not a mask in sight ffs’, while one added: ‘Still all grouped together.’

Mr Sturgess added: ‘In fairness I’m not complaining about Legoland, it was quite refreshing to have some normality even if some people were not adhering…

‘My point is about consistency. Surely an open air stadium at reduced capacity, with social distancing, will be safer?’

Legoland has put in place rules stating groups must be a maximum of six people and also asks guests to keep distant.

The theme park’s Twitter page commented on the post: ‘We encourage all guests to observe social distancing guidance via markers on the floor, numerous announcements before and after each show, staff presence at each show and putting block points in place to limit capacity.’

A Legoland spokesman said: ‘The safety and wellbeing of our guests and staff is always our top priority and since reopening on 4th July, we have operated at a reduced capacity with enhanced safety measures across the whole Resort.

‘LEGOLAND Windsor is predominantly an outdoor attraction set over 150 acres and as a Covid-19 secure venue, we can safely host larger, controlled groups but we do ask guests to play their part and observe the latest Government guidance to help protect themselves and others.

‘We have measures in place at our outdoor shows to ensure the safety of everyone, including COVID marshals to manage the flow of guests and to close areas when they reach capacity, tannoy announcements and clear signage reminding guests to keep a safe distance from others as well as enhanced cleaning and hand sanitiser throughout the area.’