LeBron James says he was not bashing the United States by questioning the country’s effort to bring imprisoned WNBA star Brittney Griner back from Russia, where she pleaded guilty to drug possession charges last week and now faces a decade behind bars.

James took criticism after suggesting on a recent episode of his HBO show, The Shop, that Griner may not want to come back to the US due to a perceived lack of support from the Biden White House. Griner, who plays professionally in Russia during the WNBA offseason, was returning to the country in February, when police claim she was found in possession of cannabis oil at Moscow’s Sheremetyevo Airport.

‘She’s been there over 110 days,’ James said in the clip of the episode, which premieres Friday. ‘Now, how could she feel like America has her back? I would be feeling like, ”Do I even want to go back to America?”’

With conservatives questioning James’s loyalty to the US, the four-time NBA champion responded on Twitter, explaining that he was putting himself in Griner’s shoes.

‘I was simply saying how she’s probably feeling emotionally along with so many other emotions, thoughts, etc inside that cage she’s been in for over 100+ days!’ James tweeted. ‘Long story short #BringHerHome.’ 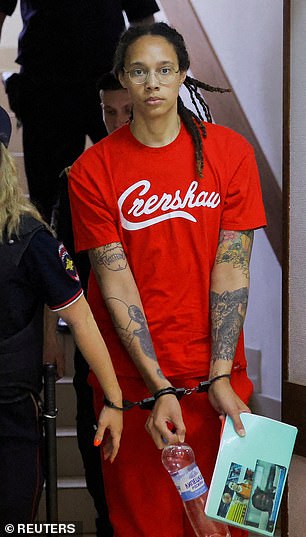 LeBron James (left) says he was not bashing the United States by questioning the country’s effort to bring imprisoned WNBA star Brittney Griner (right) back from Russia, where she pleaded guilty to drug possession charges last week and now faces a decade behind bars

With conservatives questioning James’s loyalty to the US, the four-time NBA champion responded on Twitter, explaining that he was putting himself in Griner’s shoes

James has already been maligned by conservative pundits for years over his support for the Black Lives Matter movement and his criticism of former President Donald Trump.

That disparagement only intensified in 2019 when then-Houston Rockets general manager Daryl Morey ignited controversy by tweeting his support for anti-Beijing protestors in Hong Kong, thus angering the Chinese government and resulting in financial penalties for the NBA.

In response to the controversy, James said Morey ‘wasn’t educated’ on the human rights issues within China, prompting accusations that the four-time MVP was kowtowing to communist leaders in Beijing due to his extensive financial ties to the country through his lucrative Nike endorsement deal.

Those criticisms were echoed this week by conservatives, who questioned James’s patriotism.

Maybe ‘Mr. China made me rich!’ Lebron ought to relocate to the country that enriches him by slave labor,’ tweeted former Arkansas Governor Mike Huckabee. ‘If you hate America, you don’t have to stay.’

Author and comedian Tim Young also accused James of being loyal to China.

‘LeBron James says if he were Brittney Griner, he’d question returning to the United States,’ Young tweeted. ‘2 things: 1. He’s free to leave at any point… Why not China since he loves the CCP?’

Young then added a dig against Griner: ‘2. There’s no rush to decide now. She’s got 10 years to think about it.’

Conservative podcaster Clay Travis put it bluntly: ‘LeBron on virtually every issue other than basketball is an idiot.’ 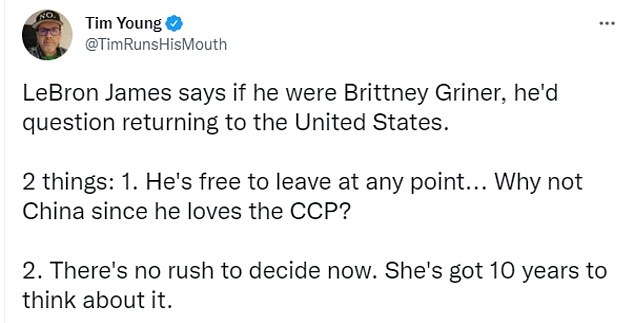 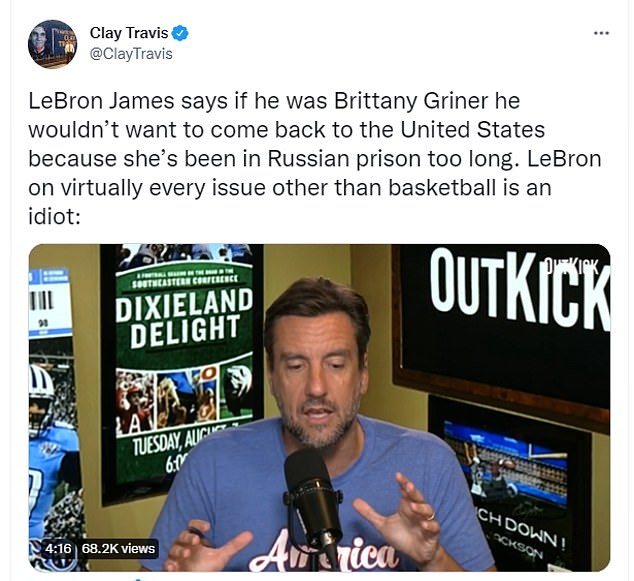 Clay Travis put it bluntly: ‘LeBron on virtually every issue other than basketball is an idiot’

Griner’s ongoing detention in Russia is complicated by a number of factors, not least of which is that country’s recent invasion of neighboring Ukraine. The US federal government considers Griner to be wrongfully detained, and there is reason to believe her recent guilty plea was more of a strategic effort to reduce her sentence rather than a genuine admission of wrongdoing. Criminal defendants win very few acquittals in Russia, and those who do can be retried.

Sources told ESPN that the guilty plea was a strategy aimed at facilitating a prisoner swap that could result in Russian detainees returning to their home country.

William Pomeranz, an expert on Russian law, previously told ESPN that defendants have little chance of being found innocent at criminal trials in the country. In fact, fewer than 1 percent of defendants in Russian criminal cases are acquitted, and unlike in US courts, acquittals can be overturned.

As Pomeranz explained prior to Thursday’s hearing, since the trail is ‘a foregone conclusion,’ Griner might be able to reduce her sentence by pleading guilty.

‘Traditionally, the best defense is to admit your guilt and hope you get a lesser sentence,’ Pomeranz said. ‘There’s not a lot of examples of people raising strong defenses and getting acquitted.’

Furthermore, pleading innocent could result in authorities retaliating against her by making her life in a Russian prison more miserable than it already is, experts told ESPN.

Griner returns to court on July 14. 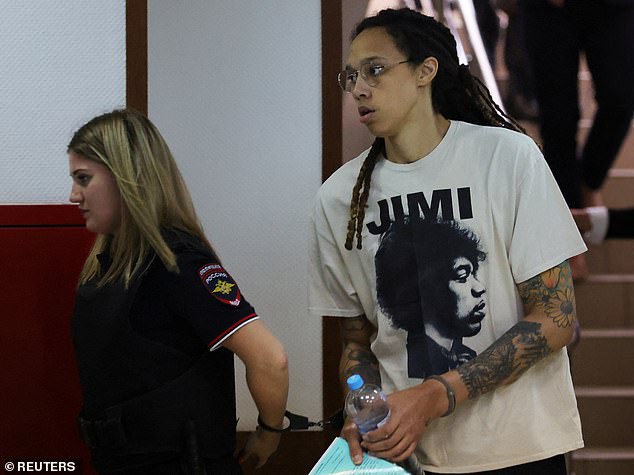 U.S. basketball player Brittney Griner, who was detained in March at Moscow’s Sheremetyevo airport and later charged with illegal possession of cannabis, is escorted before a court hearing in Khimki outside Moscow on July 1