Alexei Navalny has ended his hunger strike after three weeks of refusing food to protest his conditions in prison.

The jailed Kremlin critic said his demands had been met and that he had been examined by civilian medics.

He was swayed by an appeal by doctors who examined him, and others joining him on hunger strike.

The opposition leader ended the strike after his medics claimed he could die at ‘any minute’ despite leaked footage showing him doing pull ups in prison.

‘I don’t want anyone to experience physical suffering because of me,’ he said.

‘Taking into account the progress and all the circumstances, I am starting to come out of the hunger strike.’

Earlier on Friday, a video, presumably released with official approval, was released showing Navalny exercising, aimed at countering claims of his ill health.

It was spread among pro-Kremlin social media on Friday although it is not clear when the footage was taken.

Leaked footage of Kremlin foe Alexei Navalny in jail apparently shows him doing pull-ups, despite spending the past three weeks on hunger strike 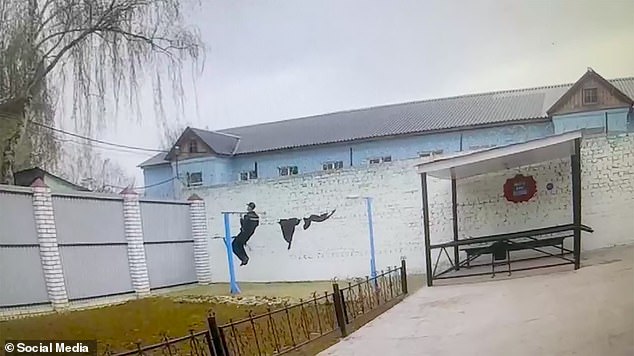 A video, presumably released with official approval, is aimed at countering claims he could die at ‘any minute’ 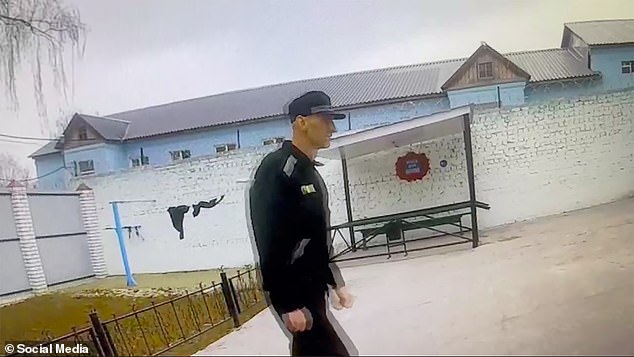 The footage was spread among pro-Kremlin social media on Friday. However it is not clear when the video was shot

One claim is that it was filmed yesterday in a recreation yard of a prison where Navalny, 44, is currently held in a hospital facility.

It comes two days after tens of thousands of his supporters protested on the streets across Russia demanding the Kremlin critic be allowed to see doctors.

Pro-Kremlin blogger Sergey Kolyasnikov called it ‘a unique video, in which a man with a sore back, twice poisoned with a deadly military-grade poison, with his failing leg and kidneys … pulls himself up on a horizontal bar.

‘Either we are witnessing a miracle of Biblical proportions or … the Russian opposition, as always, went into frenzied lies about Navalny’s health.

‘And I’m sure you know the correct answer.’

He claimed that the Western media was ‘hysterical’ about Navalny’s health. 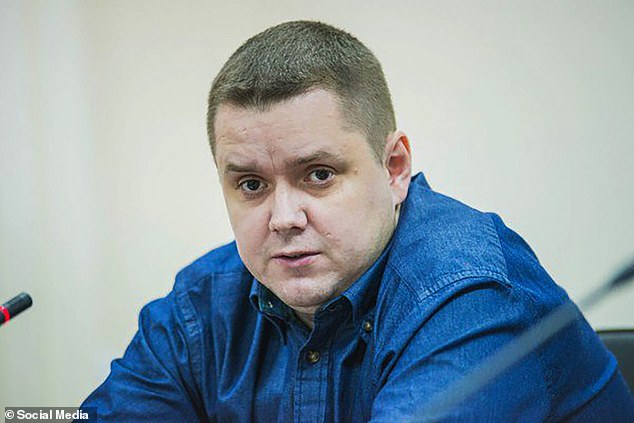 Pro-Kremlin blogger Sergey Kolyasnikov (pictured)said: ‘Either we are witnessing a miracle of Biblical proportions or … the Russian opposition, as always, went into frenzied lies about Navalny’s health’

‘On 22 April this year Navalny was pulling himself up on a bar, not quite twirling around it, which confirms the widespread lies about his physical illness,’ Prachka said.

The apparent leak breaks a number of prison and inmate privacy rules.

It comes after Navalny’s personal doctors on Thursday urged him to ‘immediately’ call off his hunger strike.

The Russian opposition leader’s health has been failing since he declared a hunger strike on March 31 to demand proper medical care for a range of ailments, including back pain and numbness in his limbs. 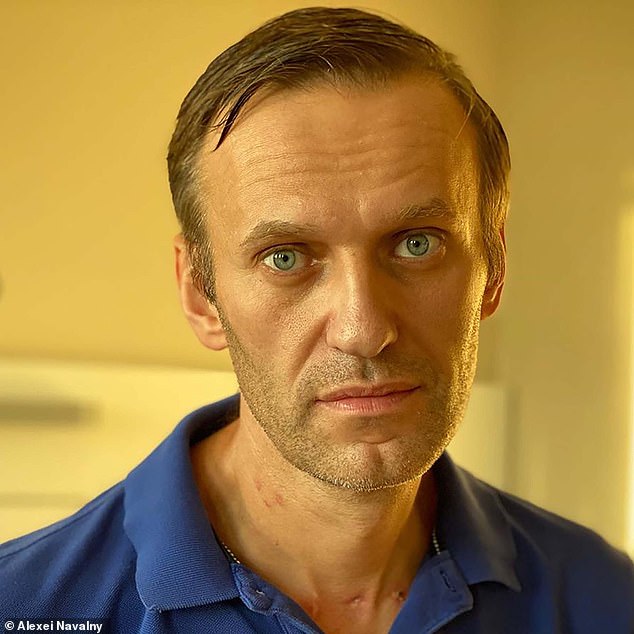 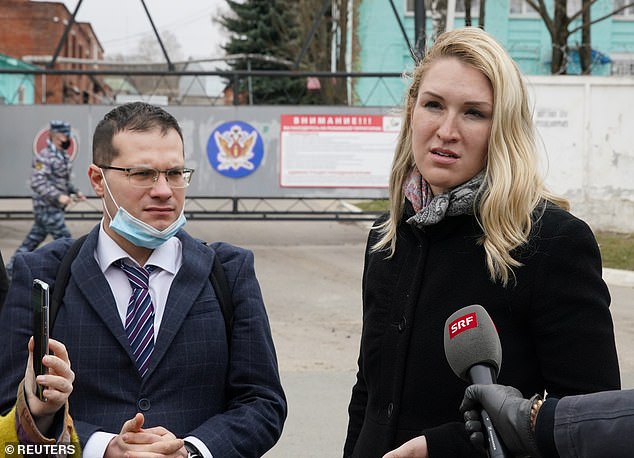 ‘If the hunger strike continues even a little longer, we will simply have no one to treat soon,’ cardiologist Yaroslav Ashikhmin (left) Pictured: Navalny’s doctors talk to media on Tuesday 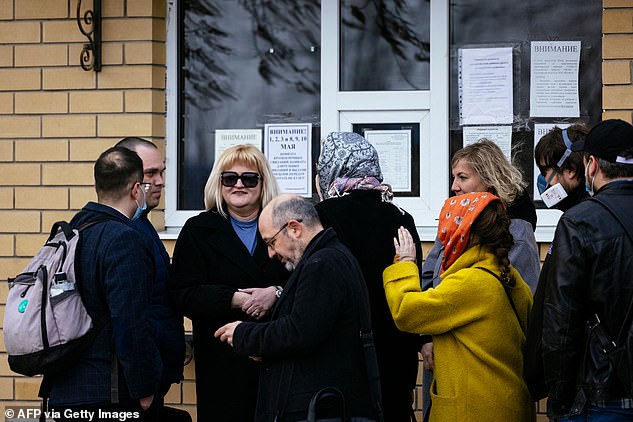 Navalny’s  doctors have warned that Navalny’s health is failing so rapidly he could die at ‘any minute,’ as the United States threatened Russia with ‘consequences’ in the event of his death

On Thursday, his private doctors – who have been unable to examine their patient in his prison colony – said they were asking Navalny to ‘immediately halt the hunger strike to preserve your life and health’.

‘If the hunger strike continues even a little longer, we will simply have no one to treat soon,’ cardiologist Yaroslav Ashikhmin and four other doctors said in a statement published by Mediazona, an independent news website.

The physicians said it was thanks to ‘huge’ public support that Navalny was on Tuesday taken to a civilian hospital in the central city of Vladimir and received access to ‘something that looks like an independent examination’.

The doctors added that they had received the results of Navalny’s health assessment and his medical tests earlier Thursday and would inform the opposition figure of their opinion the following day.

Navalny’s right-hand man Leonid Volkov said the 44-year-old’s doctors had received information about his health only because the Russian authorities responded to public pressure.

‘It is very sad that one has to refuse food for 23 days to achieve such a result,’ Volkov said.

Last weekend Navalny’s doctors said he could die at ‘any minute’, pointing to the opposition politician’s high potassium levels.

His lawyers and allies are demanding he be transferred to a regular hospital, instead of the IK-3 penal colony (pictured), but the Kremlin has said Navalny is not entitled to special treatment 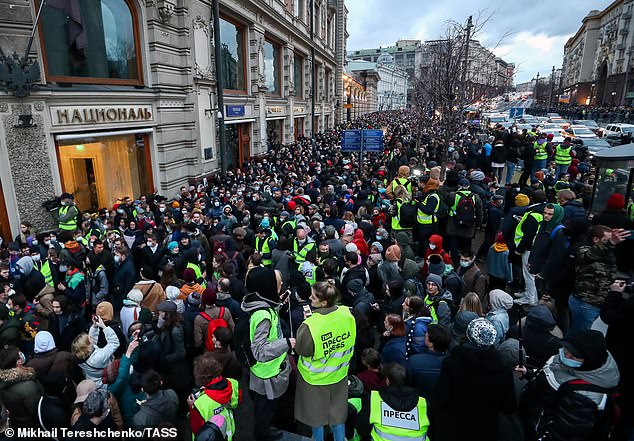 The protests came after doctors warned Navalny’s health was deteriorating after he went on hunger strike three weeks ago, on March 31 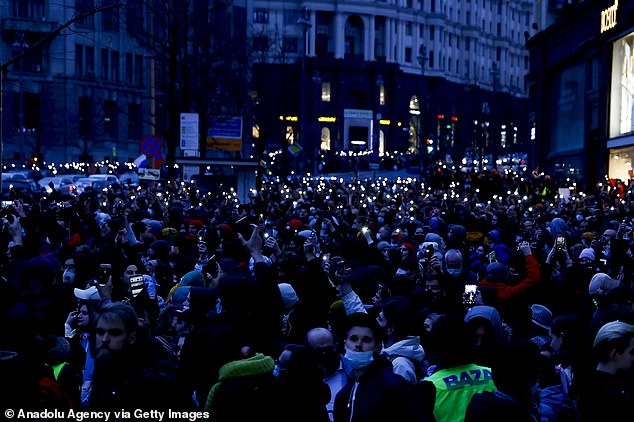 Thousands of people had marched through central Moscow near the Kremlin chanting ‘Freedom’ and ‘Putin is a thief!’, just hours after the president delivered his annual state of the nation address

Navalny himself said in an Instagram post that he was full of ‘pride and hope’ a day after protesters rallied in support, calling them the future of Russia.

‘Yesterday you walked together with me, and today I will be lying on my cot and imagining myself walking with you and for you,’ he said.

Thousands of people had marched through central Moscow near the Kremlin chanting ‘Freedom’ and ‘Putin is a thief!’, just hours after the president delivered his annual state of the nation address.

Although large crowds gathered, the protests were not on the scale of pro-Navalny demonstrations seen in January and February, when tens of thousands rallied and more than 10,000 people were arrested.

The Kremlin downplayed Wednesday’s demonstrations, which saw more than 1,900 people detained across Russia. 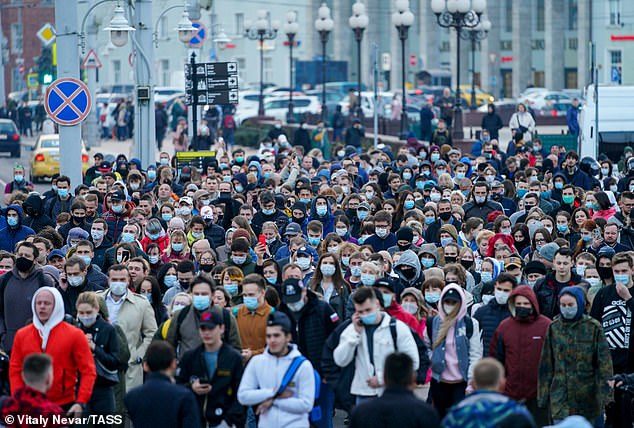 There are concerns Navalny is close to kidney failure or cardiac arrest as a result of his hunger strike, but doctors have been refused access to assess him (pictured, protesters rally in Kaliningrad) 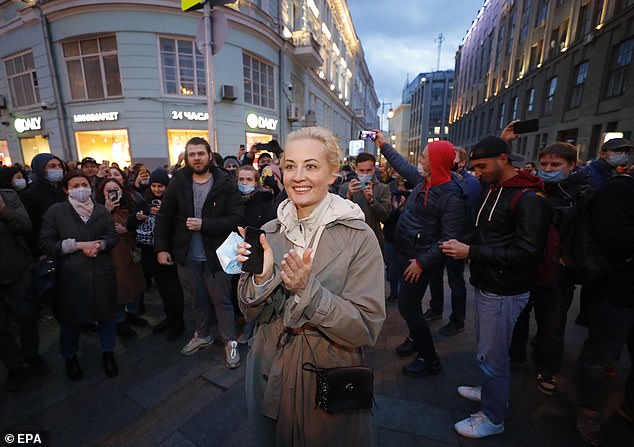 Alexei Navalny’s wife Yulia joined tens of thousands of Russians at protests calling for the opposition leader’s release on Wednesday, as police arrested more than 1,700 demonstrators

Kremlin spokesman Dmitry Peskov told reporters that he saw ‘no reason’ to comment on the rallies.

In Russia, participation in unauthorised demonstrations can lead to a fine or a brief jail term, and prosecutors are now seeking to declare Navalny’s Anti-Corruption Fund and the network of regional offices ‘extremist’ organisations.

The majority of the detentions – more than 800 – took place in Saint Petersburg, where police violently dispersed crowds with shock sticks.

Navalny’s spokeswoman Kira Yarmysh was among those detained and was given a 10-day stint behind bars for calling on people to join unauthorised rallies.

Key Navalny aide Lyubov Sobol was also taken into police custody ahead of the rally in Moscow.

Rights group Amnesty International condemned the ‘crackdown on peaceful protesters’ and the use of ‘excessive force, including tasers’ in dispersing the crowds.

Navalny was arrested when he returned to Russia in January after months recovering in Germany from a Novichok poisoning he blames on the Kremlin – an accusation Moscow rejects. 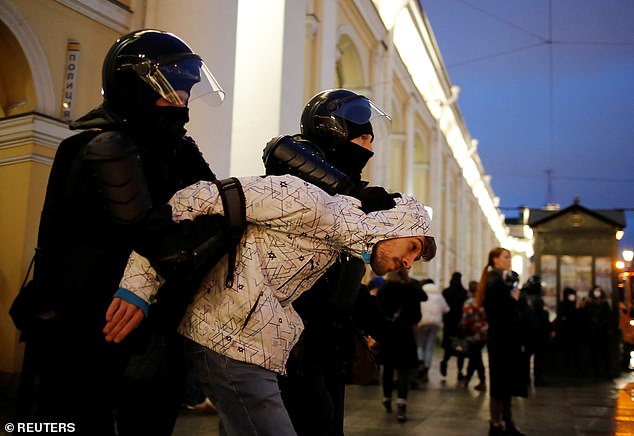 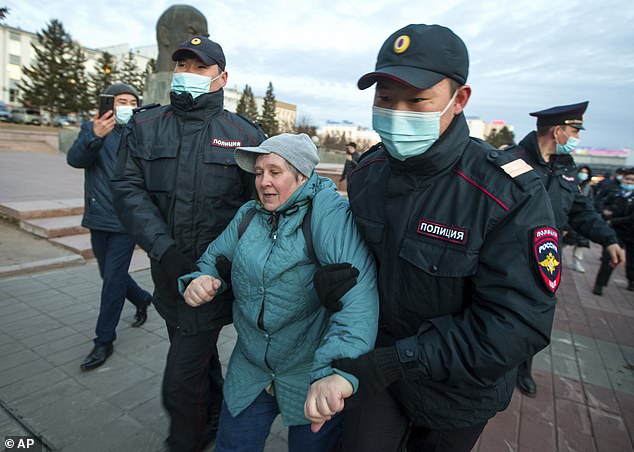 Police detained at least 1,700 people at protests across Russia in support of Kremlin critic Alexei Navalny on Wednesday, the OVD-Info protest monitoring group said (pictured, a women is detained at a demonstration in Ulan-Ude)