When Michel Barnier, the EU’s chief negotiator, sits down to resume Brexit negotiations with his British counterpart David Frost today, let’s hope he has learned his lesson.

From the moment Britain voted for Brexit more than four years ago, Brussels became enveloped by an emotionally charged thunderstorm — with Mr Barnier as its overzealous lightning bolt.

Yet last week, even those European MEPs who thought that they had seen it all — myself included — were astounded by Barnier’s latest incendiary salvo.

Insisting that Britain will never be handed full sovereignty of its fishing waters, Barnier suggested that while Britain will have control of its coastal waters, ‘the fish which are inside those waters’ is ‘another story’.

Of course, as every MEP knows, one of the most politically charged issues in Britain is access to its fishing waters.

How else can we explain the stinging ultimatum laid down by Boris Johnson yesterday, itself no doubt a response to Barnier’s intransigence?

In no uncertain words, Mr Johnson reiterated that Britain is ‘preparing, at our borders and at our ports, to be ready for’ a ‘trading arrangement with the EU like Australia’s’.

Certainly it was a bold, no-nonsense act of statesmanship designed to reassure his citizens on the eve of crucial negotiations.

But one has to wonder whether it would have been needed had Barnier prioritised political compromises that could have enabled a deal over making such unhelpful remarks.

Whatever the truth, his petulance lends justification to rumours circulating among EU diplomats that European Commission President Ursula von der Leyen wants to sideline him and take control of the negotiators herself.

You could be forgiven for thinking that the prospect of such a move would enrage anti-federalist MEPs such as myself.

And yet, having watched how Barnier’s arsenal of aggressive tactics have failed to break the current impasse, it has become increasingly clear that he simply isn’t up to the job.

After all, the role of the EU’s chief negotiator is not to play politics but to work towards an agreement with the United Kingdom — the European Union’s most important trading partner, on a par with the United States and China.

For the truth is that Brexit and the outcome of the ongoing negotiations are politically sensitive subjects.

Livelihoods on both sides of the Channel are at stake, and macho bluster simply isn’t going to cut it.

Indeed, it’s hardly surprising that a resolution is yet to be reached when the EU has put so much effort into trying to impose its own regulations on the UK.

Take the example of state aid — the use of public money to give financial assistance to organisations and companies — a tool which Downing Street hopes to utilise to subsidise new industries after Brexit and, together with Britain’s fisheries, is seen as the key remaining obstacle to a deal.

At the moment, the EU’s intransigent negotiating team maintains that Britain can only enjoy a fruitful access to its market if it pledges to remain aligned to the bloc’s rules on state aid.

On paper, that may seem like a technical problem, but ultimately what this negotiation comes down to is something more fundamental — trust.

In this case, the EU’s failure to trust the UK to distribute state aid in a responsible manner.

Of course, this overlooks the fact that if there is one area where the birthplace of Western-European democracy should be trusted, it is in its institutional framework.

On a practical level, too, fears that the UK would suddenly dish out massive handouts of state aid are misplaced.

Let’s not forget that in 2018, Britain spent only half as much on state aid as the average EU country.

And that’s before the Covid pandemic drove European countries to inject monstrous amounts of government cash into the private sector.

Germany alone splashed out almost twice as much state money as the UK.

Indeed, if anyone has grounds to be suspicious about the unfair use of state aid, it’s Britain.

Undoubtedly aware of this, yesterday the EU shifted its disdain for Britain’s handling of its departure to focus on the leaked text of a proposed Internal Market Bill due to be published tomorrow.

In essence, Prime Minister Johnson’s Bill would override two sections of the Withdrawal Agreement first negotiated by his predecessor Theresa May: those on state aid and customs in Northern Ireland.

Like clockwork, President von der Leyen warned that if the Bill is passed, it could torpedo any hope of a post-Brexit trade deal, despite the fact that the draft legislation hasn’t even been published.

Predictably, Barnier weighed in, too, claiming in a grandiose fashion that the Northern Ireland Protocol in the Withdrawal Agreement was a ‘prerequisite for peace since the end of the [Irish] conflict’.

Of course, we still need to see the detail of the Bill before making a judgment, though I strongly suspect that these accusations are overblown.

Even so, this episode has revealed the EU’s knee-jerk approach to these negotiations.

Put to one side the fact that a number of EU member states fail to accurately implement the bloc’s many protocols.

Far more concerning is how it is symptomatic of the EU negotiators’ reluctance to accept that, whether it likes it or not, the UK is going to become a sovereign nation at the end of the year. 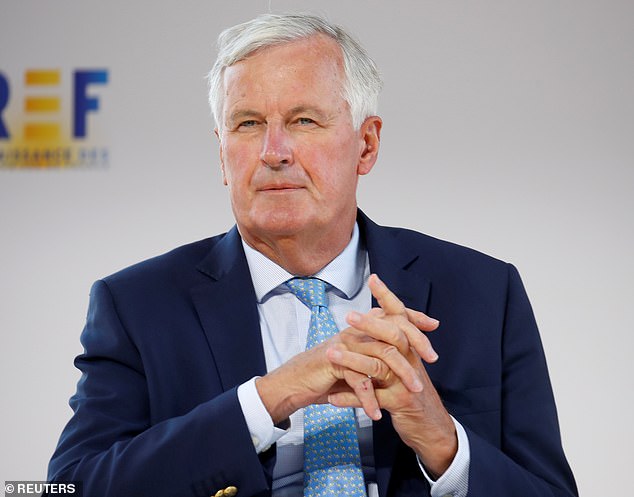 When Michel Barnier (pictured), the EU’s chief negotiator, sits down to resume Brexit negotiations with his British counterpart David Frost today, let’s hope he has learned his lesson

For, crucially, Brexit needn’t be bad news for the EU.

Indeed, if the Covid crisis has taught us anything, it’s that doing things differently on an international scale can be useful. We can learn from each other’s successes and failures.

Understandably, it is hard for Brussels to accept that in areas such as financial services, the UK Government is likely to prefer to go its own regulatory way.

Yet given it has become clear that there will be many occasions where the UK Government chooses not to deviate from certain EU technical standards, such as in car manufacturing, it is simply not reasonable for the likes of Barnier to dismiss Britain outright.

For that is precisely what Brussels’ chief negotiator and his acolytes have been relentlessly doing — even though the EU’s trade arrangement with Switzerland, which does not treat services and goods equally, proves that Barnier’s claims about flexibility endangering the single market are farcical.

It also forgets that restricting EU market access for UK-based companies could end up damaging Europe, not least because its consumers and importers will be deprived of British business.

Moreover, some of these firms with a large presence in the UK, such as BMW, are actually owned by EU shareholders.

How would the EU benefit from seeing its supply chain disrupted?

And that’s before you factor in the debilitating impact that restricting financial investment from the City of London into the EU would have on mainland Europe’s post-Covid recovery.

And so as Michel Barnier sits down today at the negotiating table, he would do well to wake up to a cold hard fact: the Brexit clock is ticking — and Britain and Europe’s badly suffering economies simply have no time for political games.

n Charlie Weimers is MEP representing the Sweden Democrats, which is part of European Conservatives and Reformists group.