Dental experts have warned against a potentially ‘extremely harmful’ new TikTok beauty trend which sees users bleaching their own teeth at home.

Users from the US and the UK have revealed how they buy hydrogen peroxide – one of the active whitening agents used in over-the-counter and professional teeth whitening products – and apply the chemical directly onto their teeth to achieve a brighter smile.

Among them is 18-year-old Claudia, from Essex, whose video of the process has racked up nearly 3 million views on the video sharing platform. The teenager bought a £4 bottle of hydrogen peroxide from eBay and used a cotton bud to apply the liquid directly to her teeth for up to one minute.

However Claudia appeared unconcerned with potential risks, saying in the voiceover to her video: ‘If you’re a dentist, don’t tell me this is wrong, save me the grief, the damage has already been done.’

She later pointed out that some US teeth whitening products use up to 14 per cent of hydrogen peroxide in their products, and insisted she is not encouraging any other users to use the same method as her.

Leading dentists have warned against a potentially ‘extremely harmful’ new beauty trend which sees teens bleaching their own teeth after a video of Claudia, 18, from Essex, attracted millions of views online 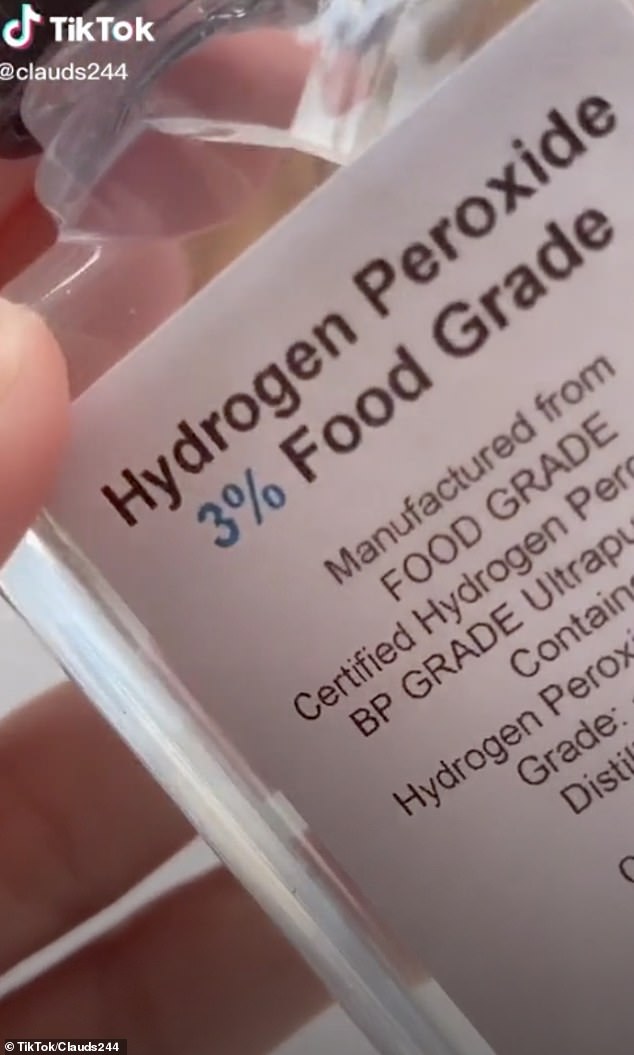 The youngster coined the method, and applied hydrogen peroxide purchased for £4 from eBay to her teeth

She also said she was delighted with the results of the DIY procedure. She added: ‘After four days I had to stop using it because it worked so well so stop wasting your money with whitening strips.’

Dental experts warned using undiluted hydrogen peroxide in strong concentrations in this way poses significant risk to long-term oral health. The substance can cause sever gum damage, which can eventually lead to tooth loss, as well as damage the enamel and tooth sensitivity.

Dr Reena Wadia, founder of London gum clinic RW Perio, explained: ‘Professional teeth whitening systems use a custom-made “tray” that holds the hydrogen peroxide gel in contact with the teeth and prevents it from contacting the gum tissue.

‘This is important as if the gel touches the gums it can lead to gum irritation, inflammation and pain.’ Severe gum issues can even lead to teeth falling out.

She continued: ‘Gums and bone hold your teeth in place so there is no point having white teeth if they start loosening up, changing position and eventually fall out. 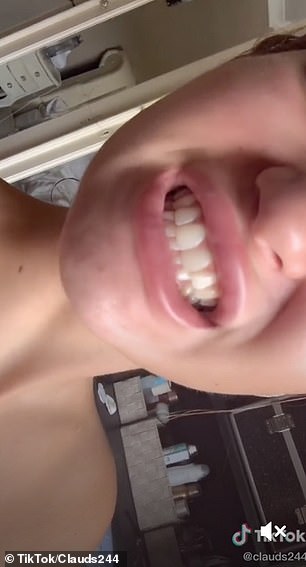 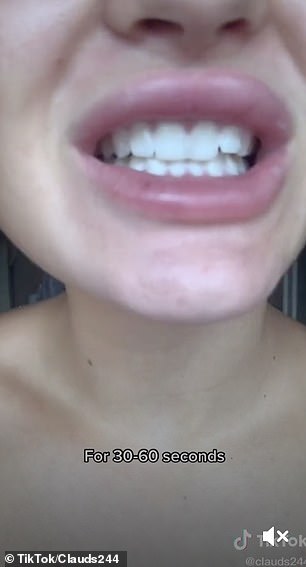 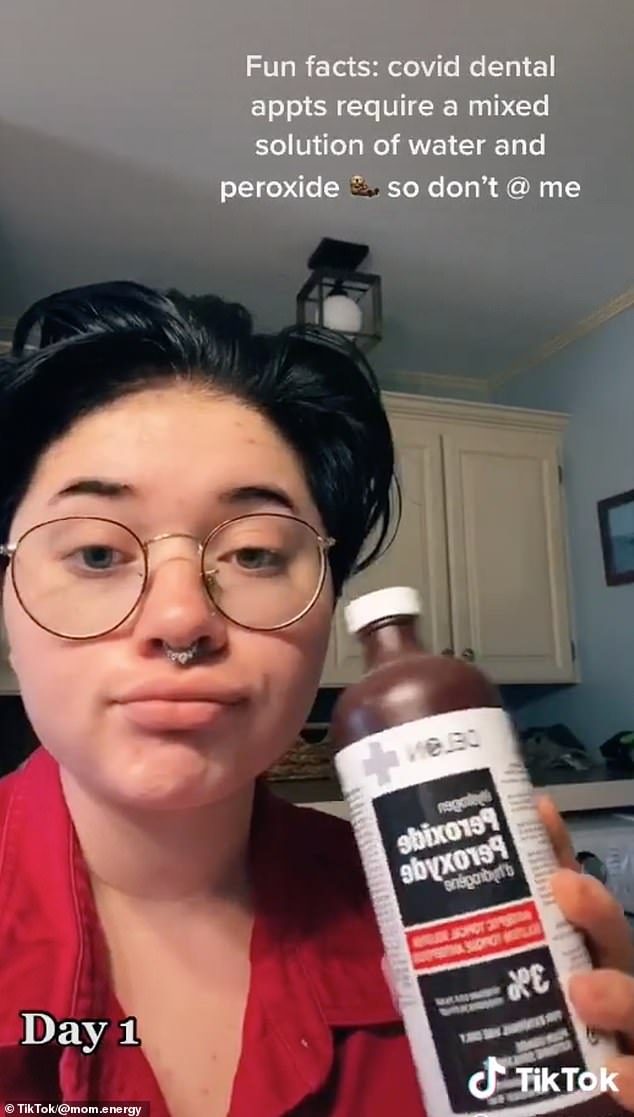 The trend is sweeping across the internet, with US user Sher sharing a video of her using the chemical to whiten her teeth (pictured)

‘Professional teeth whitening involves supervision from a dental professional who can oversee the whole process.

‘This allows you to have the very best whitening result while ensuring that no harm is being done.’

However following backlash from her original video, Claudia shared a statement in which she pointed out that Crest whitening strips use 14 per cent of hydrogen peroxide.

She pointed out that her hack only used three per cent, and emphasised that she is not encouraging anyone other users to use the same method as her.

‘I didn’t expect that video to go that viral that quickly, Claudia said in her second video, ‘But I just want to show you something for the people that are having a go at me.

Claudia then showed on screen the back of a Crest whitening strip packet, showing it includes hydrogen peroxide, and then the result of a Google search saying the brand uses 14 per cent hydrogen peroxide in their product.

She went on: ‘For the people saying it can irritate your skin, it’s so bad for you, this is bleach, it can damage your enamel. It’s three per cent.

‘It’s very small, the Crest whitening strips use 14 and these are sold and people use them all the time, every day. This is what I did personally, i’m not telling anyone else to do it.

‘I just wanted to share my hack and I didn’t expect that many people to see it. Please do your research and stop blaming me.

‘So if these use 14 cent and dentists use16 per cent, this is a very small amount. If you do want to use it use it in moderation.’

Crest is a US brand, meaning it does not have to adhere to the same regulations as products made in the UK.

In the UK, teeth whitening is tightly regulated, with dentists only allowed to use bleaching gels with between 0.1 per cent and 6 per cent hydrogen peroxide.

What is hydrogen peroxide and is it safe?

Hydrogen peroxide is an acidic chemical compound that is used in household cleaner, hair bleach and teeth whitening products.

However in high concentrations it can be corrosive to the eyes, skin, and respiratory system. For this reason, it needs to be used with caution on people.

In teeth whitening products, it works to dissolve stains.

This can be done most safely when the amount of hydrogen peroxide can be carefully monitored.

Risks increase if DIY solutions are made at home or if it is not applied correctly.

Meanwhile in the US, tooth whitening is considered a cosmetic procedure, and so do not need to be approved or tested by the Food and Drug Administration (FDA) before going on sale.

Whitening agents hydrogen peroxide and carbamide peroxide are only available in controlled concentrations in over-the-counter teeth whitening products in the UK to protect consumers.

Higher concentration products, which can lead to more rapid teeth whitening, are only available from dentists.

Buying hydrogen peroxide directly from online sellers means users can achieve the bright white smile more quickly and without the cost of a dentist appointment.

It also means younger teenagers can access higher concentrates of teeth whitening agents, which are usually only administered by dentists to patients over 18.

However it comes with significant risk if used in an unsafe manner.

Hydrogen peroxide can also lead to increased tooth sensitivity, particularly when used over a longer term.

While the ingredient does not damage enamel when applied alongside a mixing agent, there are risks if it is used as an undiluted solution.

Meanwhile hygienist Anna Middleton, based in London, warned that a ‘white’ smile does not mean the teeth are healthy.

She said: ‘Dentistry work goes far beyond just looking at your teeth, when you see a professional they will also consider your overall health when performing a procedure.’

Anna continued: ‘We all want a beautiful white smile but it’s important to realise health is a critical part of that.

‘One of the most common diseases that is missed or ignored is gum disease. Bleeding gums are the first sign and are an alarm bell that something needs to be done.’ 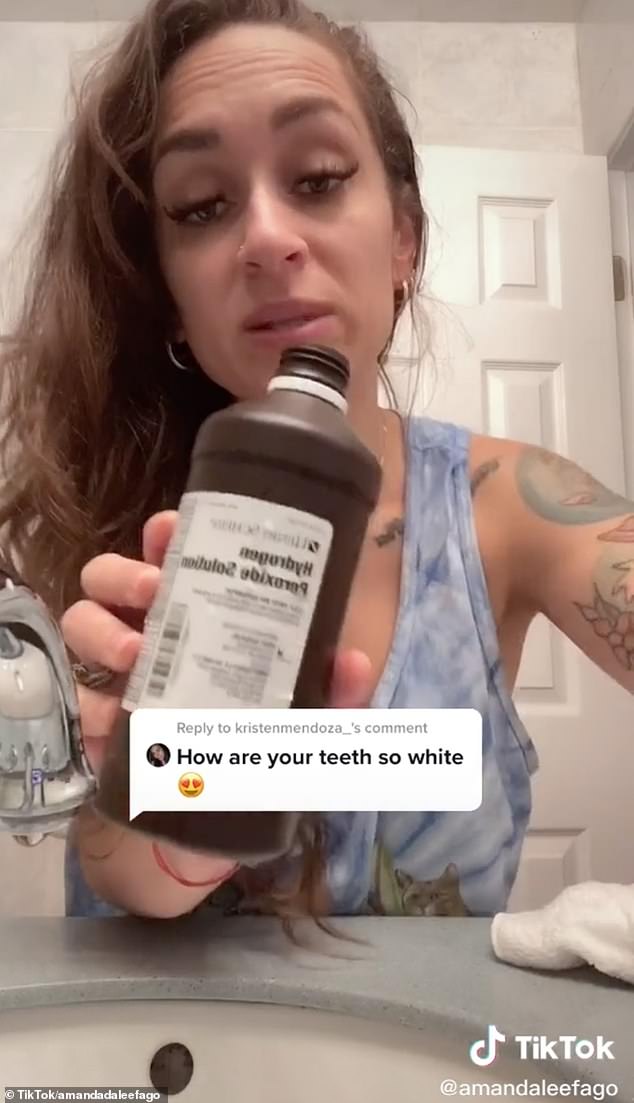 Another user, Amanda, from the US, told her followers she often rinses her mouth with the product to keep her teeth white