Lawyers have encouraged students in isolation at university to seek their help pro-bono amid a growing row over coronavirus lockdowns on campuses.

Up to 4,000 students across Britain are now self-isolating for a fortnight after more than 500 cases of Covid-19 were confirmed across at least 32 universities.

Among them are 1,700 students under lockdown at the Manchester Metropolitan University (MMU) campuses of Birley and Cambridge Halls. All lectures, seminars and classes for first-year students at the university will now be online for the next 14 days.

And Levins Solicitors of Liverpool tweeted: ‘To the MMU students at Birley campus and Cambridge halls: get in touch and we will do our best to help, pro bono.’

The number of students trying to get a shopping delivery means some say they are starting to run out of food, with parents turning up to halls with bags of shopping.

MMU student Phoebe told BBC Radio 4’s Today programme: ‘I’ve had a test back and I’m actually positive, which is quite scary. I wouldn’t be surprised if I’ve got corona from this place. Before the isolation would be the period when I would have got it.

‘There’s just been non-stop parties, no social distancing, no wearing masks in the corridors, which would all contribute to the spread.’

As thousands prepared to start the new term, the president of the National Union of Students said the Government was ‘gambling’ with students’ lives.

Five of the 1,700 students under lockdown at the Manchester Metropolitan University (MMU) campuses of Birley and Cambridge Halls speak to Sky News yesterday following the outbreak 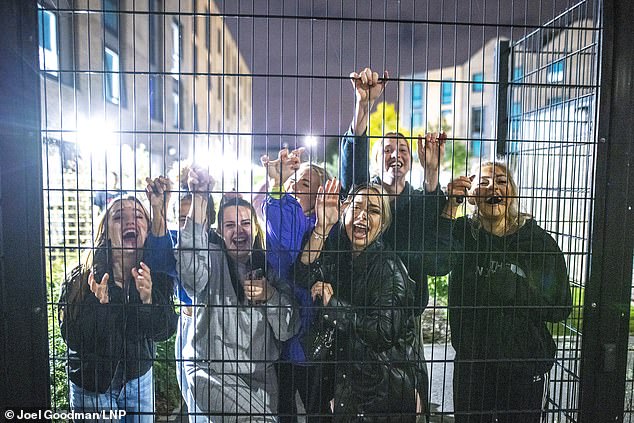 Labour even called for a delay to the start of the English term until the chaotic testing system can meet soaring demand.

‘Some of them will be vulnerable to mental ill health, and for some of them it’s the very first time away from home.

‘So I think that the very first thing that needs to happen is that universities need to be given the support to identify which students may be particularly vulnerable.

‘The second thing is there needs to be an assessment of which young people want to stay at university and which ones may not want to stay there.’ 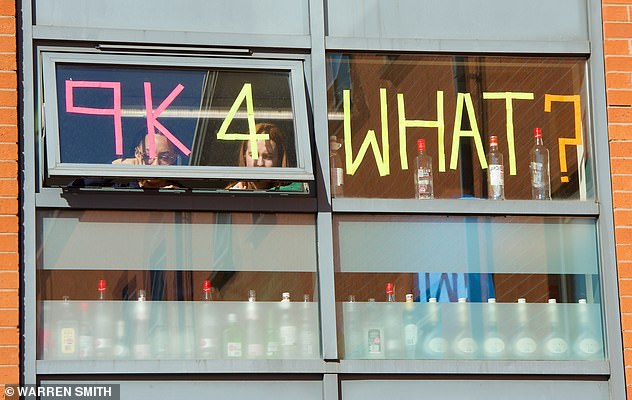 She added: ‘If young people want to be returning at some point between now and Christmas, there needs to be a plan that the Government works up with universities so that we have a managed Covid-secure return of those young people to home.

‘Because what we can’t have is for those young people to be moving in the same numbers at the same time that they were at the start of term, but doing that at Christmas time.’

Pressure is mounting on universities to refund tuition fees as thousands of students face lockdowns, online-only courses and the prospect of Christmas confined to their halls.

Tory MPs said it was ‘madness’ that the country’s universities were charging the same fees for ‘second-rate’ learning.

As students face the prospect of being confined to their halls of residence over Christmas because of Covid-19 outbreaks on campuses, 3,000 students have already been locked down in their rooms after cases at 36 universities, including Glasgow, Manchester Metropolitan and Edinburgh Napier.

Last night Robert Halfon, the Conservative chairman of the education select committee, said students must be compensated for the lack of face-to-face learning.

The Department for Education said students who wanted refunds should appeal to their universities.

Mr Halfon told the Daily Mail: ‘If we have 3,000 students in lockdown now, it could be 6,000 next week, so ministers need to come up with a plan on testing and tracing. And we need to ensure students are back by Christmas, because a lockdown over Christmas would cause anguish for them and their families.

‘The Government needs to seriously consider a discount, because when you pay for a product you should expect to get that product, and if not, you should get some money returned.’

Tory MP George Freeman said yesterday it was ‘madness’ that students were locked in halls of residences by universities ‘still happily taking their money’.

He said on Twitter: ‘How do I think universities make up the losses from offering student discounts? Well, not from fleecing students! Maybe from vice-chancellors’ £300,000 salaries?’

Health minister Helen Whately told Radio 4 that the Government could not rule out the prospect that university students may be unable to return home at Christmas.

She said: ‘We want them to be home for Christmas. Everybody wants to come home and spend Christmas with family. We want that very much to be the case.

‘Christmas is some time off yet and it is down to all of us to get this under control so we can spend Christmas with our families.’

In Manchester, the 1,700 students have been told they cannot leave the campus to visit the local testing centre, leading to fears the outbreak will spread.

Labour education spokesman Kate Green last night called on ministers to stop students from returning to university for the start of the academic year – affecting 2.3 million in the UK.

She said they should either delay the start of term or ‘pause’ the return of students to university campuses where courses had not started.

She added in a tweet: ‘Government and universities are gambling with students’ lives.’

But outgoing University of Buckingham vice-chancellor Sir Anthony Seldon said: ‘We must have a sense of perspective. Universities have gone to huge lengths to plan for this and many are coping.’

And the Department for Education rejected Labour’s call, insisting it was ‘working closely with universities to support them to keep staff and students as safe as possible’.

‘We’re, we think, only meant to socialise with our flat, but they haven’t really been enforced or been made clear.

‘It’s just been a lot quieter, it’s been harder making friends. Turning up and realising everything is going to be online is a bit of an anti-climax.

‘You’d think it (a zoology degree) would be quite a lot of lab work, and it’s quite worrying how I’m going to do that online.

‘I just think the way Manchester Met and other places have been locked down, being on your room on your own for two weeks with now freedom there, I don’t I’d be able to cope with that, so it’s kind of worrying.’

Her stepfather Chris Taplin told the programme: ‘I do feel she’s certainly been robbed of the experienced I had at university.

‘It is also really scary when you read things about the Christmas threat, not coming home, when it is the first time they’ve moved out and we basically feel we’d be some kind of law breaker if we went there and busted her out. But it’s been the first thing for a sort of mental trauma, really. 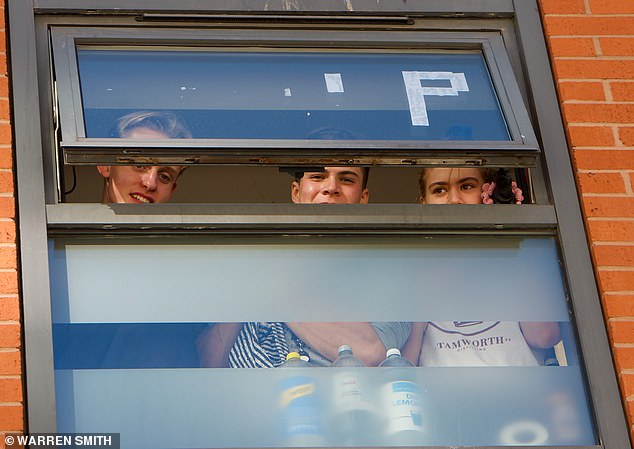 ‘Certainly my wife has been saying, ‘don’t worry we’ll get you out’ (if she’s locked down in halls at Christmas), but I think that’s obviously not a very sensible position to go and do that.

‘But I think we’re both making sure we get food to her and keep talking to her as much as possible.’

The 1,700 MMU students in lockdown yesterday complained of feeling abandoned – with some already plotting their escape.

After 127 positive tests for Covid-19 on Friday, the shocked students – many of them freshers living away from home for the first time – were ordered to self-isolate in their halls of residence for a fortnight. 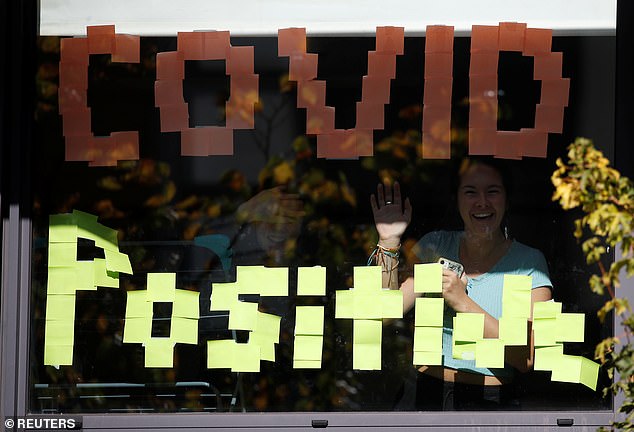 Some tried to ease the boredom by putting up signs in their windows with slogans including ‘send drink’ and ‘f*** Boris’.

A Oxford professor has urged universities in the UK to follow Sweden and pay infected freshers to trace their contacts as at least 32 report Covid cases.

Carl Heneghan, professor of evidence-based medicine at Oxford University told the Times newspaper the Government had helped every sector but had ‘clamped down’ on students.

The professor said that the UK should pay students to trace their contacts if they become infected and said students should be trusted to behave like responsible adults instead of being locked on campus over Christmas.

He added: ‘We should waive student fees. We have asked people to go back to university and at the first sign cases are going up, we are clamping down on people.’

As some students in lockdown likened the university to a prison by labelling it ‘HMP MMU’, with security guards blocking them from leaving, legal experts claimed their incarceration could amount to false imprisonment.

Hours later, university vice-chancellor Professor Malcolm Press conceded it could only ‘expect’ students to follow the self-isolation rules – designed to avoid spreading the infection to their home towns.

While many students pledged to stick it out, others were preparing to flee the city.

Tilly Thompson, 19, said she felt like a ‘caged animal’ and was waiting for her mother to take her home to Wolverhampton.

Students claimed some of those under restrictions had been ignoring the rules and throwing parties.

A student called Tom told BBC Radio 5 Live that people had been running past their flats shouting: ‘Open your doors, we’ve got coronavirus, we want to give it to you.’

He added: ‘It was insane… parties going on everywhere, loud music… It was like a prison riot.’

Martyn Moss, of the University and College Union, said he had warned MMU chiefs that their plans for the ‘mass return of students would inevitably see institutions become Covid incubators’.

He added: ‘Universities should have spent the summer following the science and preparing properly for this inevitable crisis.’

* Are you a student in lockdown? Send your photos to: pictures@mailonline.co.uk *