U.S. prosecutors on two coasts have charged Trump critic and attorney Michael Avenatti with extortion and bank and wire fraud.

A spokesperson for the U.S. attorney in Los Angeles said Avenatti was arrested Monday in New York. While the two cases are separate and unrelated, the prosecutors in New York and Los Angeles say they did co-ordinate the arrest today.

In New York, Avenatti was accused of threatening to use his ability to get publicity to harm Nike. Calling it “an old-fashioned shakedown,” prosecutors say he tried to extort more than $20 million US from the company.

In the California case, Avenatti’s arrest was pursuant to a criminal complaint alleging he embezzled a client’s money in order to pay his own expenses and debts — as well as those of his coffee business and law firm — and also defrauded a bank by using phony tax returns to obtain millions of dollars in loans. A felony complaint charges him with wire and bank fraud.

U.S. Attorney Nick Hanna told reporters in L.A. that the case filed in Los Angeles on Friday and unsealed Monday paints “an ugly picture of lawless conduct and greed.”

The case alleges in part that Avenatti collected a $1.6 million settlement for a client and used it for his own interests.

Avenatti appeared briefly in court in New York Monday evening and was ordered released on $300,000 US bond. He did not enter a plea. Emerging from the courthouse, he thanked the federal agents who arrested him for being courteous and professional.

“As all of you know, for the entirety of my career I have fought against the powerful. Powerful people and powerful corporations. I will never stop fighting that good fight,” he said. “I am highly confident that when all the evidence is laid bare in connection with these cases, when it is all known, when due process occurs, that I will be fully exonerated and justice will be done.”

If convicted on the bank and wire fraud, Avenatti could face up to 50 years in prison.

New York prosecutors said Avenatti and an unnamed co-conspirator met with Nike’s attorneys on March 19 and said they had a client, a former amateur athletic coach, who had evidence that Nike employees had paid bribes to top high school players to convince them to play for Nike-sponsored teams.

A former executive at Nike rival Adidas was recently convicted in federal court in Manhattan of taking part in a similar scheme.

Avenatti told Nike that he would go public unless it paid his client $1.5 million and hired him to conduct an internal investigation for between $15 million and $25 million, according to the complaint. Prosecutors in New York said Avenatti also offered to accept a $22.5 million payment to resolve the client’s claims and “buy Avenatti’s silence.”

In a March 20 follow-up call with Nike’s lawyers, Avenatti said that if his demands were not met, “I’ll go take ten billion dollars off your client’s market cap… I’m not f-cking around,” according to the complaint.

Nike did not immediately respond to a request for comment.

The charges were revealed shortly after Avenatti said on Twitter that he would hold a news conference on Tuesday to reveal “a major high school/college basketball scandal” that reached “the highest levels of Nike.”

Tmrw at 11 am ET, we will be holding a press conference to disclose a major high school/college basketball scandal perpetrated by <a href=”https://twitter.com/Nike?ref_src=twsrc%5Etfw”>@Nike</a> that we have uncovered. This criminal conduct reaches the highest levels of Nike and involves some of the biggest names in college basketball.

The charges carry a potential penalty of 47 years in prison.

The court papers said the alleged co-conspirator, who was not identified in court papers, is also an attorney licensed to practise in California.

Two people familiar with the investigation confirmed that the unidentified co-conspirator was Mark Geragos, an L.A. criminal defence lawyer known for his work with celebrities. The people spoke on condition of anonymity because the information was not made public by prosecutors. 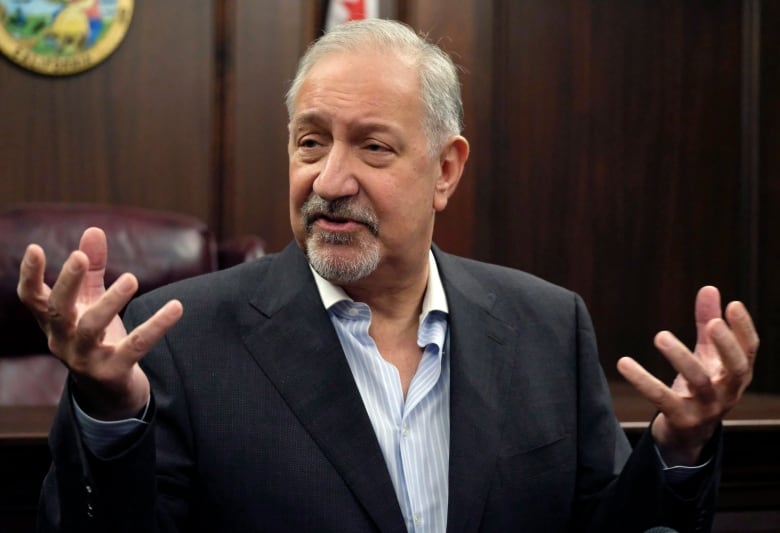 Attorney Mark Geragos has been identified by people familiar with the Nike case as Avenatti’s co-conspirator. CNN cut ties with Geragos within hours of the news. (Richard Vogel/Associated Press)

Geragos, a CNN contributor, has a client list that has included Michael Jackson, Winona Ryder, Scott Peterson and most recently Jussie Smollett, the actor accused of fabricating a racist, anti-gay attack in Chicago. Geragos did not respond to messages seeking comment. Within hours, CNN cut ties with him.

The court documents said the client is a coach of an amateur athletic union (AAU) men’s basketball program in California. The complaint said the AAU program coached by the Avenatti client was sponsored by Nike for $72,000 annually.

Avenatti represented Daniels, whose real name is Stephanie Clifford, in a lawsuit to break a confidentiality agreement to speak about her alleged affair with Trump.

Daniels tweeted she was saddened by the news of Avenatti’s arrest, but not surprised.

My statement regarding my former attorney Mr. Avenatti.. <a href=”https://t.co/9aKYCPNN6y”>pic.twitter.com/9aKYCPNN6y</a>

The arrest of a prominent Trump critic came a day after the U.S. attorney general released a summary of special counsel Robert Mueller’s findings clearing the president’s campaign of conspiring with Russia in the 2016 U.S. election.

The prosecutors in both cases said the timing had nothing to do with the Mueller report.

Trump’s eldest son, Donald Trump Jr., reacted with glee to the news on Twitter, bashing out a series of tweets, including: “#MAGA – Michael Avenatti Getting Arrested!!!”