With heavy backing and heavier fists Lawrence Okolie continued his climb towards a cruiserweight unification fight with a thumping win over Dilan Prasovic on Saturday night.

As the chief support to the clash with Oleksandr Usyk and his manager, Anthony Joshua, Okolie crushed the Montenegrin within three rounds in his first defence of the WBO world title.

Okolie dropped his mandatory challenger with a pair of right hands in the second before finishing him with a left to the body in the third.

By progressing to 17-0, and with a 14th win inside the distance on his record, there is a growing appetite to see him step up to a fascinating engagement with Mairis Briedis, the IBF champion. Whether he is ready for a test of that scale remains to be seen, and few clues could be gleaned for those purposes from this win over an unbeaten but limited opponent. He proved his power, but that much was already known.

Meanwhile, Campbell Hatton was given the benefit of a generous decision over Sonni Martinez, a late replacement from Uruguay with a record four defeats in six coming in. In what was meant to be a straightforward test, Hatton was only able to stretch his unbeaten record to a fourth win via the questionable scoring of the referee, Marcus McDonnell, who called it 58-57 in the 20-year-old’s favour. 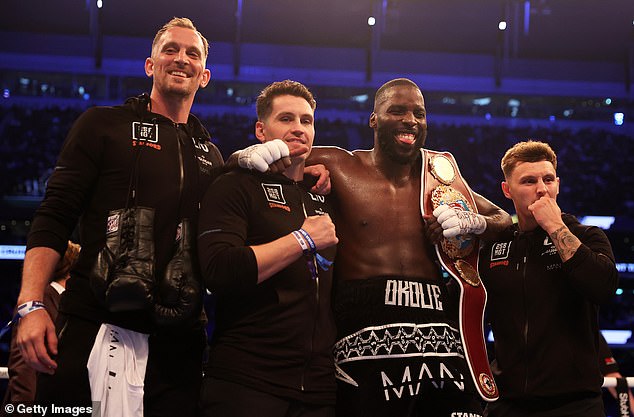 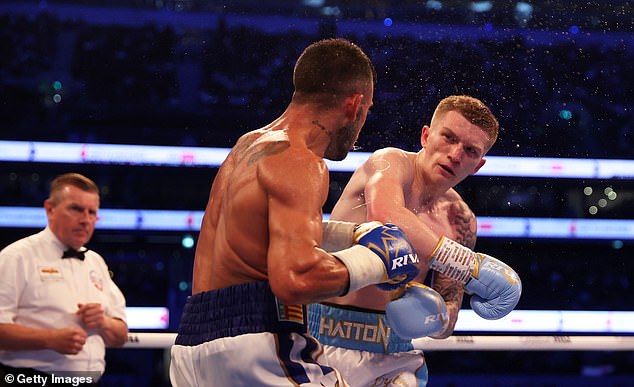 Earlier, Campbell Hatton was fortunate to win his first ever six rounder by points in Tottenham

Hatton, who was defensively open from the first bell, swallowed numerous uppercuts in the six-rounder and the announcement of his win was booed by sizeable elements of the crowds. There ought to now be a consideration among his team to continuing his development as a novice lightweight on lower-profile cards with lesser pressure.

Earlier, Lenin Castillo was carried from the ring on a stretcher after being stopped by former super-middleweight world champion Callum Smith. In troubling scenes, the Dominican Republic fighter was convulsing on the canvas following a big right hand to the jaw in the second round from Smith, who was making his debut at light-heavyweight.

Eddie Hearn confirmed 20 minutes after the incident that Castillo was ‘responsive’ and on his way to hospital.