The chaotic breach of the U.S. Capitol by supporters of Donald Trump on Wednesday was met with swift condemnation by both Democratic and Republican lawmakers, with some observers blaming the president for inciting the riot, and others suggesting he be impeached.

Long after rioters had overwhelmed Capitol Police and stormed the building where lawmakers were to vote to certify Democrat Joe Biden’s victory in the presidential election, Trump tweeted a video message in which he repeated the same falsehoods about the election being stolen from him that he’s been feeding his supporters for more than two months.

“I know your pain. I know your hurt. We had an election that was stolen from us. It was a landslide election and everyone knows it, especially the other side. But you have to go home now. we have to have peace,” he told his supporters.

“This was a fraudulent election but we can’t play into the hands of these people. We have to have peace, so go home. We love you. You’re very special.”

President-elect Joe Biden took a different tone, tweeting: “What we are seeing is a small number of extremists dedicated to lawlessness. This is not dissent, it’s disorder. It borders on sedition, and it must end. Now.”

Trump had urged his supporters to come to Washington to protest Congress’s formal approval of Biden’s win in the general election. Several Republican lawmakers have backed his calls and said they plan to object to the certification of the electoral college vote despite there being no evidence of widespread fraud or wrongdoing in the election.

Following a rally Trump hosted before the joint session of Congress, his supporters marched to the Capitol and eventually forced their way into the building, sending the lawmakers and their staff into hiding and the building into lockdown.

Washington police said at least one woman was shot inside the Capitol and died later at an area hospital. It was not immediately clear how she was shot.

Vice-President Mike Pence also condemned the actions of the rioters in the building.

“The violence and destruction taking place at the U.S. Capitol Must Stop and it Must Stop Now. Anyone involved must respect Law Enforcement officers and immediately leave the building,” he tweeted.

Other lawmakers, strategists and commentators directed some of their outrage at the president.

Republican Rep. Mike Gallagher, a Trump supporter from Wisconsin, implored the president during an interview on CNN to “Call it off! Call it off!” He also posted a video in which he said, “This is banana republic crap that we’re watching right now.”

Sen. Ben Sasse, a Republican senator from Nebraska and a vocal critic of Trump, said in a statement that the U.S. Capitol was “ransacked” while “the leader of the free world cowered behind his keyboard.”

“Lies have consequences. This violence was the inevitable and ugly outcome of the president’s addiction to constantly stoking division,” he said.

Rep. Jennifer Wexton, a Democrat from Virginia, said the president had been encouraging these “domestic terrorists” since before the election.

“He could have stopped them at any moment, but instead he whipped them into a frenzy and sicced them on the Capitol,” she tweeted. “The cabinet must remove him today or the House must impeach.” 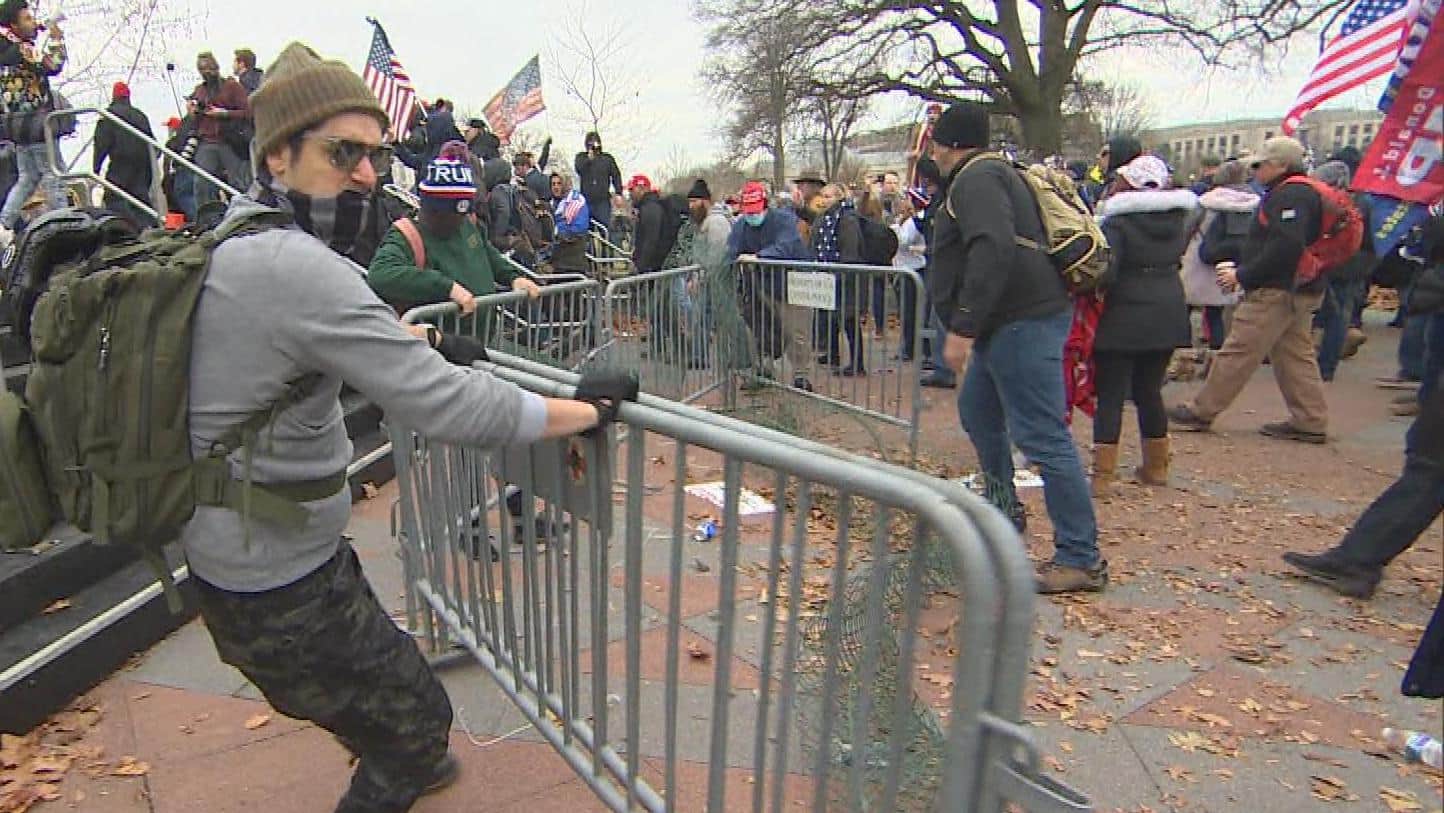 Thousands of people protested at the U.S. Capitol in Washington, D.C., crashing through barricades and climbing the steps as Congress voted to certify Joe Biden’s presidential election victory. 2:05

Conservative commentator David Frum, a critic of the president, said action to impeach the president should be taken tonight.

“Remove this treasonous president. Invite his own party to join the effort to remove him now, or to share now and forever Trump’s guilt,” Frum wrote in the Atlantic.

In a statement, Jay Timmons, the CEO of the National Association of Manufacturers, which represents 14,000 companies in the U.S., blamed Trump for inciting the violence and said Pence should “seriously consider” invoking the constitution’s 25th Amendment to remove Trump from office.

World leaders also offered their reactions to the chaos.

“Obviously, we’re concerned and we’re following the situation minute by minute as it unfolds,” Canadian Prime Minister Justin Trudeau said in a radio interview with News 1130 in Vancouver.

British Prime Minister Boris Johnson referred to the “disgraceful scenes” at Capitol Hill, and said it’s “vital that there should be a peaceful and orderly transfer of power.”

European Parliament President David Sassoli called the rioting “deeply concerning,” but said he’s “certain the U.S. will ensure that the rules of democracy are protected.” 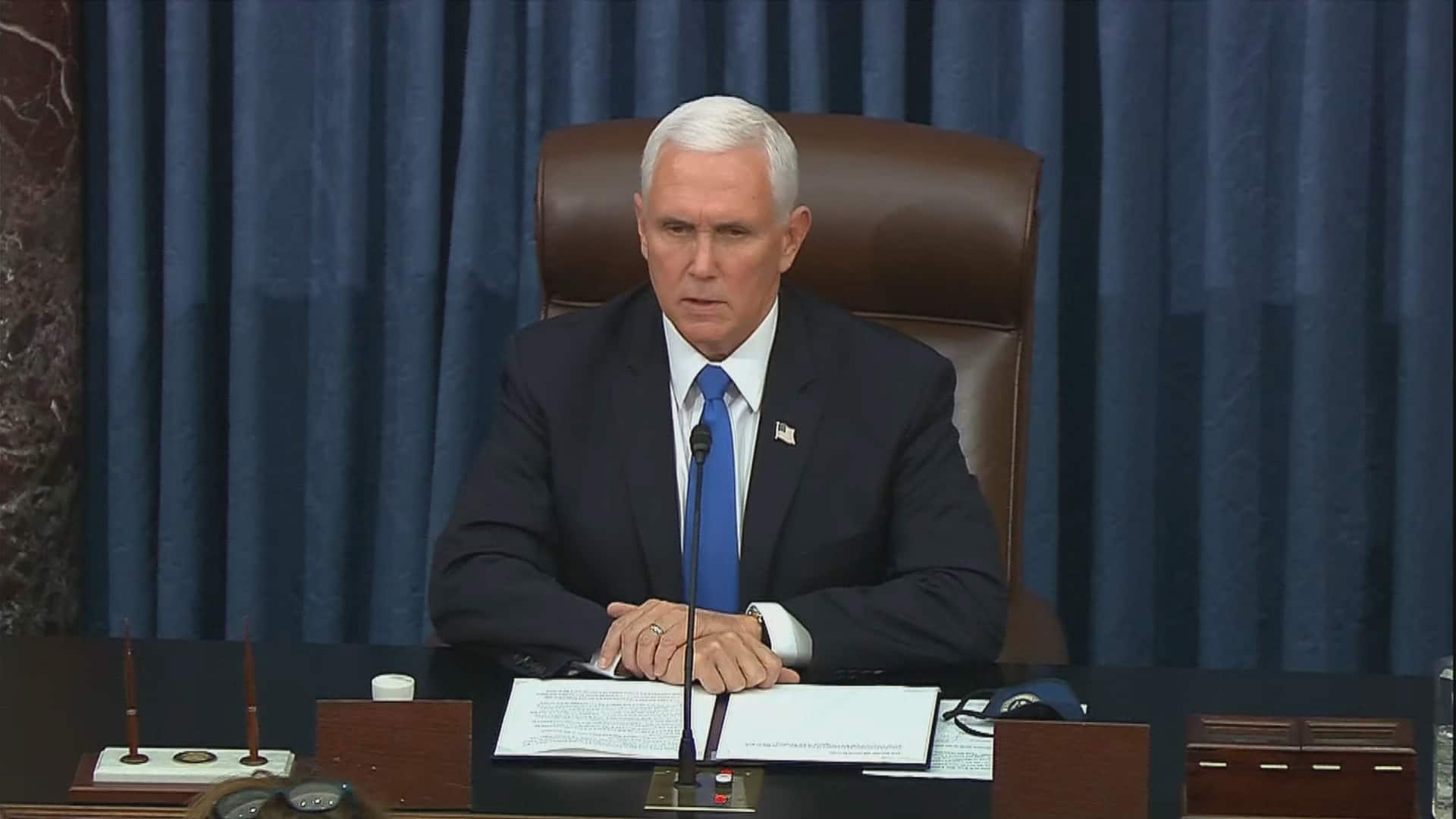