London Mayoral hopeful Laurence Fox today vowed to ban Covid passports in the capital and promised a ‘no-mask mandate’ as he launched his manifesto.

The outspoken actor, who unveiled his policies in front of a bus with the message ‘Free London’, said he wanted to ‘stop the child abuse’ and remove compulsory face coverings for pupils in schools.

Mr Fox has also this week promised six months of free rides on buses and tubes in a bid to boost the capital’s economy after more than a year in lockdown.

The plans would cost Transport for London some £500 million in lost fares, but Mr Fox insists the boom it would provide to the city’s economy would easily see money recouped.

Other pledges included a Union Flag flying outside every school, and a vow to that no woman will have to share a private bathroom or changing space with a man.

But despite a grand launch in front of Winston Churchill’s statue in Parliament Square today, Mr Fox’s Reclaim Party was unable to provide a full manifesto beyond a list of bullet points. 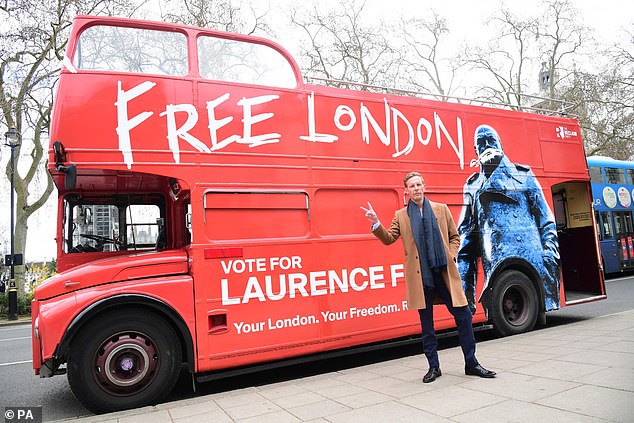 The outspoken actor, who unveiled his policies in front of a bus with the message ‘Free London’, said he wanted to ‘stop the child abuse’ and remove face coverings from pupils in schools

Speaking in front of Winston Churchill’s statue in Parliament Square, Mr Fox today demanded the end of lockdown and plans for evidence of a jab or a negative test to be provided at venues to allow entry.

He described the Government’s handling of the Covid crisis as a series of ‘manipulations, fear-mongering and deceptions used to prolong lockdown’ and insisted the public should be given the freedom of choice.

He said: ‘There is no reason we have been kept in lockdown. Instead of trusting us to live our lives, the government is now flirting with yet more authoritarian ideas, the very facistic ideas that Winston Churchill stood against, and a whole generation of Brits fought and died for.

‘London will be a Covid passport-free city. There will be no mask mandate in London. Children will not have to wear masks in school.

‘London has a choice. You can either vote for one of the lockdown candidates, or you can vote for freedom, to reclaim your city.

‘London will open fully, finally and permanently on May 6. There will be free transport for 6 months. A helping hand to get you back to work and play, and a helping hand for cafes, pubs, shops and all the enterprise of London.

‘I will build 250,000 homes, a full audit of the greenbelt will take place with our precious landscape preserved for eternity and unattractive scrubland turned into beautiful and affordable housing.

‘I will take the politics out of policing. Petty crime will be dealt with firmly in a New York-style policing strategy to serve as reminder to hardened criminals that London will be a more hostile environment for them.’ 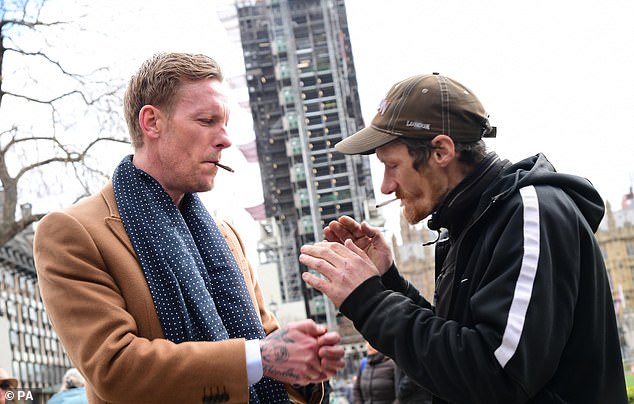 It comes after Mr Fox last week launched a drive-by heckle at Sadiq Khan as he kicked off his bid to take him on in the election.

The 42-year-old actor is standing as a candidate for the Reclaim Party that he set up last year to fight the ‘culture wars’ taking place in Britain.

Launching his campaign to a crowd in Westminster, Mr Fox said that the current Mayor ‘Khan’t’ be trusted to lead the capital, and that he was ‘ashamed to be British’.

He then boarded a ‘Free London’ branded battle bus before riding to a campaign event the Mayor was holding nearby.

In a high-pitched voice, Mr Fox shouts: ‘Alright Sadiqi-wiqi! I’m nicking your house, mate!’ as he passes the incumbent mayor.

Mr Fox today attacked London’s ‘cathedral of wokery’ as he pledged to erect hundreds more statues of military heroes across London in response to protests to remove the likes of Winston Churchill’s bust last summer.

He also said that he will refuse to take a Covid vaccine until 2023 when monitoring for some of the jabs will be completed.

His campaign for the May elections will be completely funded by a donation from ex-Tory political donor and financier Jeremy Hosking, who is worth £375million.

Mr Fox has promised to ‘unlock London’ in May if elected, and said he would help people to ‘reclaim their freedom’.

Arriving at his campaign launch on a bus daubed with the slogan ‘Free London’, Mr Fox said: ‘I am not a politician. I never wanted to be a politician,’ before quipping that he ‘used’ to be an actor.