Laurence Fox and Piers Corbyn are holding demonstrations outside Wimbledon.

Today is the final day of this year’s Wimbledon championship, with Novak Djokovic and Matteo Berrettini facing off against each other at the All England Club in west London.

A handful of demonstrators gathered outside the venue holding placards decrying lockdowns, with a few bearing anti-vaccination messages. 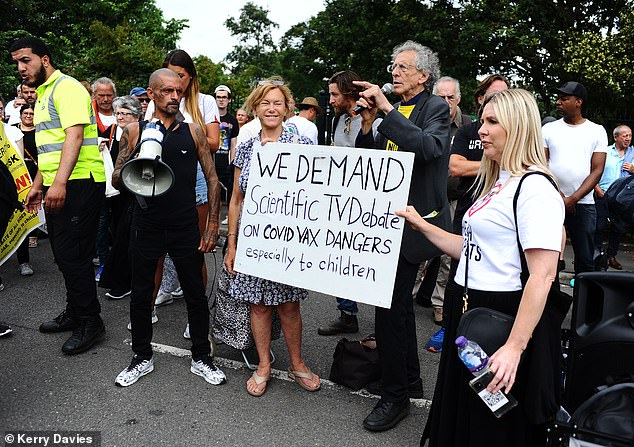 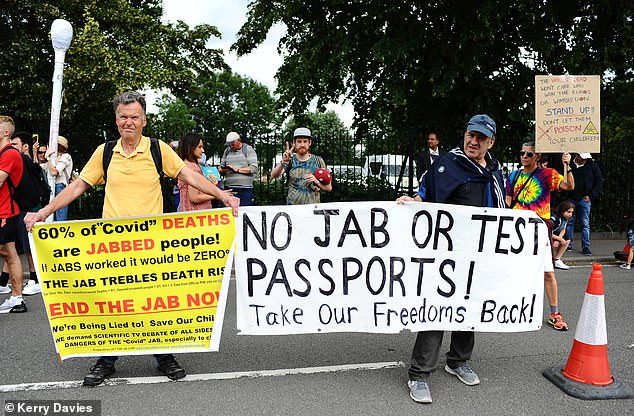 Protesters holding signs stand outside Wimbledon today. One sign says: ‘No jab or test passports! Take our freedoms back!’ 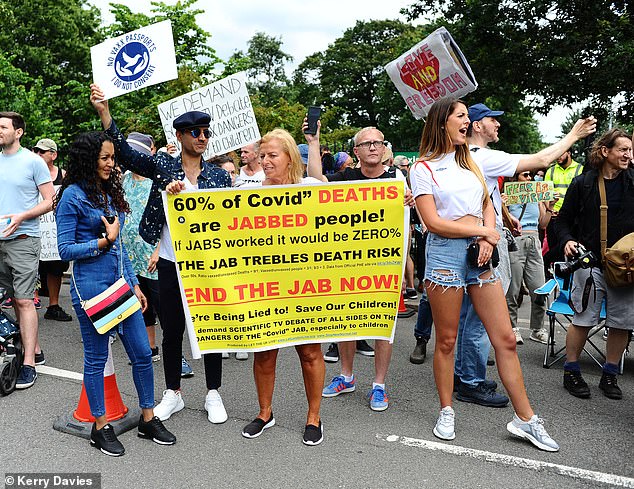 The protests come amid warnings that life is likely to be ‘massively disrupted’ by people being told to self-isolate as the number of coronavirus cases rises over the summer.

Professor Sir David Spiegelhalter said it would make sense to get the rules ‘in proportion’, as vaccines minister Nadhim Zahawi confirmed the Government was looking at ways to tweak the NHS Covid app.

There have been concerns that people are deleting or disabling the app amid a huge rise in exposure alerts sent to users in England telling them to isolate.

Representative body NHS Providers said a growing number of trusts had told them of their concerns in recent days about how self-isolation of staff is now ‘significantly impacting their ability to deliver care’.

Downing Street said on Friday that ahead of Step 4 of restrictions being lifted, expected on July 19, officials were examining whether NHS staff could be freed of the obligation to self-isolate if ‘pinged’ by the Covid app. 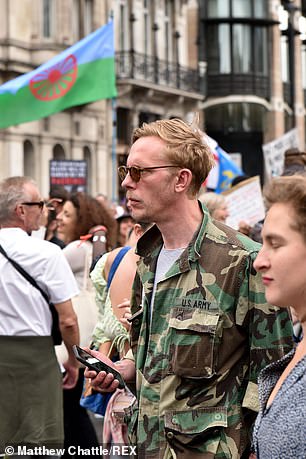 Laurence Fox pictured at the Unite for Freedom protest march

Under current plans, people who are fully vaccinated will be able to forgo self-isolation even if the app detects they have been in contact with someone who has tested positive after August 16.

Hospitality chiefs have warned that the delay between restrictions being lifted and self-isolation rules being eased risks ‘the summer being cancelled and vast swathes of the population unnecessarily confined to their homes’.

Sir David, a statistician from the University of Cambridge, said if people are vaccinated and then pinged by the app, it is a ‘very low percentage’ who have ‘actually got the virus’.

He told BBC One’s The Andrew Marr Show: ‘Few people told to self-isolate actually have an infection, and especially if they’re vaxxed, and so I do think it makes sense to get this in proportion to actually ‘what are the benefits of this massive disruption?”

Asked about stories of people deleting or disabling the app to avoid being ‘pinged’ and told to self-isolate, he said: ‘I’m not going to comment on whether I think that’s a good or bad thing to do.’

Mr Zahawi said the app ‘was developed and operationalised at a time when we didn’t have vaccines’.

Speaking on Trevor Phillips On Sunday on Sky News, he said: ‘The team are looking at how we use that app in terms of alerting people to those around them who test positive.’

He added: ‘It’s important to look at that in a new context of this massive vaccination programme and make sure that it is fit for purpose for this new world including, for example, being able to take maybe five days, as we have piloted, of lateral flow tests and upload them to the system rather than having to self-isolate.’

Sir David said it is ‘absolutely inevitable’ there will be a ‘big wave’ of coronavirus cases as restrictions are lifted. 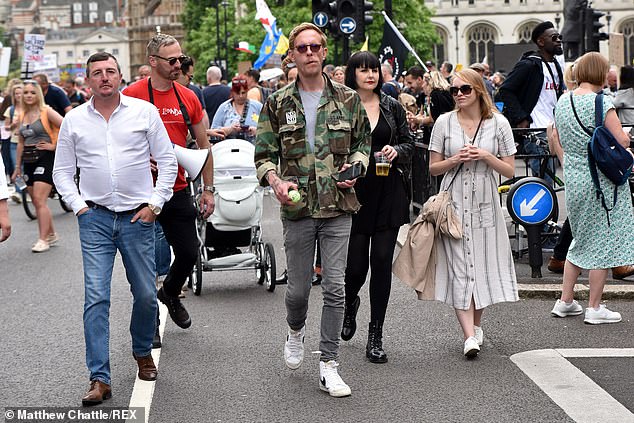 Health Secretary Sajid Javid has already said case numbers could reach 100,000 per day in the summer as measures are eased, and Sir David said he thinks this is ‘quite possible’, adding that relaxing ‘everything at once on July 19 will only make that more likely’.

Sir David told The Andrew Marr Show: ‘Frankly, you know, unless tomorrow an immediate lockdown is announced – which I think is pretty unlikely – there’s bound to be a big wave of cases coming up, absolutely inevitable. It was predictable right from the start of the road map announcement back in February.’

But he said it will be ‘mainly young cases’ and noted that an unvaccinated 30-year-old still has a lower risk of dying from the virus than an older person who is jabbed.

The professor told The Andrew Marr Show: ‘There’s far more vaxxed over-50s dying than unvaxxed under-50s. So what it does mean is that if you’re in this current wave, if you’re unvaxxed and older, you’re at very high risk and that means that some communities are going to be hard hit.’

He said that the vaccine could reduce the chances of younger people getting long Covid, adding: ‘And also of course you help everyone else around you.’

The UK’s national statistician Professor Sir Ian Diamond said the experts are ‘keeping an absolutely close, minute-by-minute eye’ on the number of Covid-19 infections, and that in terms of antibody levels, the UK is doing ‘very well’.

He said the link between infections and being admitted to hospital, having serious disease and dying has been ‘severely weakened’.

Sir Ian told Sky: ‘We have a younger cohort of people being hospitalised at the moment and while hospitalisations are going up, they are now a long way from some of the levels we have seen before.

‘And so I’m very hopeful that we have really made a strong break, but at the same time, I would have to say at the moment all the evidence allows me to say severely weakened.’

Dr Susan Hopkins, from Public Health England (PHE), said people should ‘try our best’ to continue working from home if they can as cases rise in the next four to six weeks.

She told Times Radio: ‘Then we should continue to look and see and have a cautious return to the office over the coming weeks once we start to see a decline in the number of cases.’