These are the last moments of Seoul’s mayor as he set off to kill himself following allegations of sexual harassment.

Newly released CCTV footage shows Park Won-soon, 64, wearing a blue cap, dark jacket and trousers, walking down an alley as he made his way to his suicide spot.

He kept his head bowed and wore a backpack as he left his official residence in Gahoe-dong shortly after 10:40am on Thursday, having cancelled his meetings for the day.

The mayor left a suicide note apologising to his family before he was found dead on Friday morning – but did not acknowledge claims of sexual harassment against him.

Police discovered the body of Park Won-soon, 64, on a mountain in northern Seoul early Friday, after hundreds of officers scoured the area for more than seven hours following his disappearance.

The mayor wore a blue cap and dark trousers and jacket as he walked along an alley after leaving his official residence in Gahoe-dong shortly after 10:40am on Thursday 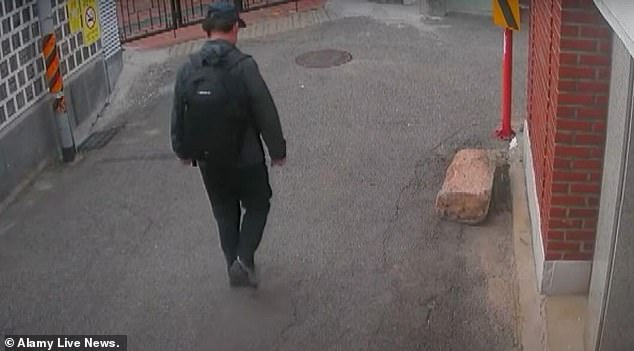 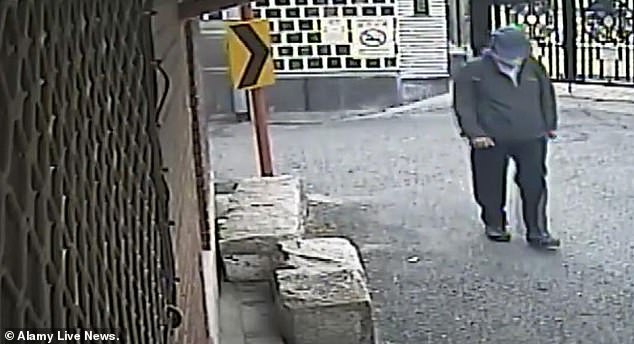 An officer said his body was found near a restaurant and banquet hall located in the hills.

‘I apologise to everyone,’ Park said in a note handwritten in ink and brush and left on his desk at his official residence, which was released by the city authorities.

‘I thank everyone who was with me in my lifetime. I am so sorry to my family, to whom I have only caused pain’, he wrote, asking to be cremated and his ashes scattered at his parents’ graves. 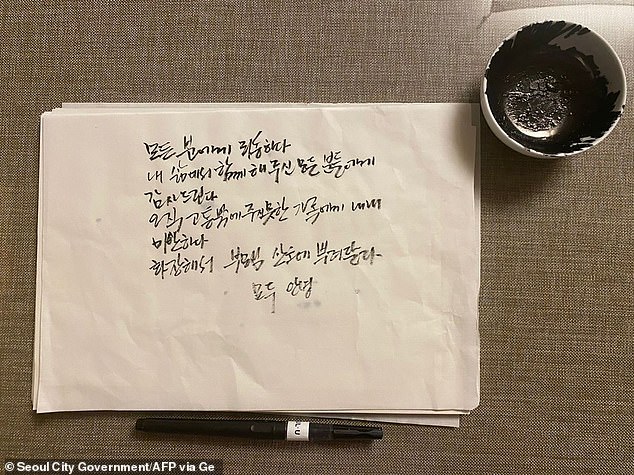 ‘Bye everyone,’ he signed off, without referring to the allegations against him.

The SBS network had reported that one of Won-soon’s secretaries lodged a complaint with police on Wednesday night, accusing the mayor of sexual harassment that had began in 2017.

A programme on the previously unreported accusation was due to be aired on Thursday.

A document purporting to be the statement from Won-soon’s victim, who worked as his personal secretary from 2015, alleged he committed ‘sexual harassment and inappropriate gestures during work hours’.

The claims include insisting she hug him in the bedroom adjoining his office.

After work, she said, he sent her ‘selfies of himself in his underwear and lewd comments’ on a messenger app.

‘I brainwashed myself, bearing tremendous fear and humiliation, that all of this was in the interest of Seoul City, myself, and mayor Park,’ she claimed in the document.

Police later confirmed that a complaint against Park had been filed but cited privacy issues in refusing to elaborate, including on whether the complaint related specifically to sexual behaviour. 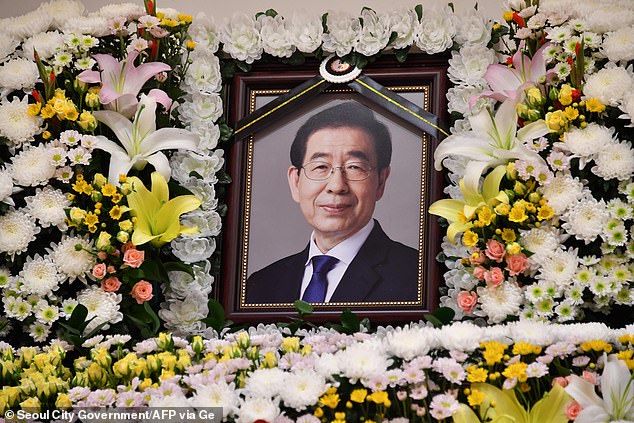 There was an outpouring of grief from his supporters, some of whom wailed at Seoul National University Hospital as his body was brought in 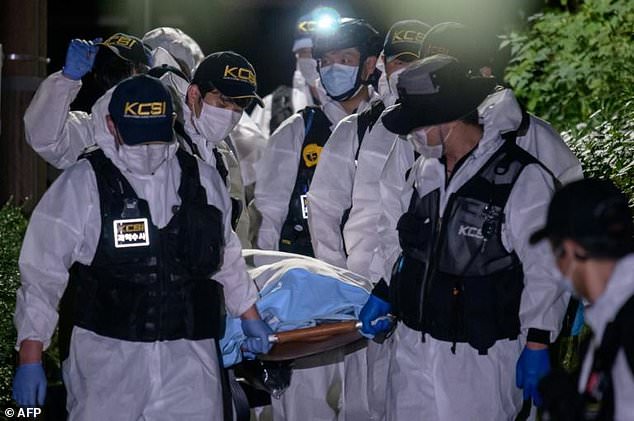 Won-soon’s death means the investigation will automatically be closed.

The mayor is by far the most high-profile politician to be implicated in a harassment case in South Korea, a highly patriarchal society where the #MeToo movement has led to the fall of scores of prominent men in multiple fields.

Reactions were mixed on Friday, including both condolences and criticism that he killed himself to avoid punishment.

There was an outpouring of grief from his supporters, some of whom wailed at Seoul National University Hospital as his body was brought in.

‘Mayor Park, you were an excellent politician,’ one poster wrote on Daum, the country’s second-largest site. 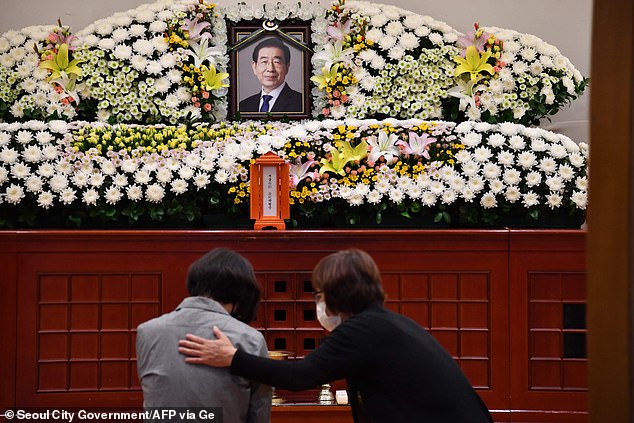 Reactions were mixed on Friday, including both condolences and criticism that he killed himself to avoid punishment

‘But a twist of fate put an end to your journey. I hope you are at ease in heaven.’

Others were more critical, accusing him of exploiting his power to harass a subordinate and then taking his own life to ‘avoid the fallout’.

‘The victim must have had painful times in the run-up to the filing of the complaint,’ wrote one user.

‘I hope Park reflects on his misdeeds and atones in the afterlife.’

A memorial altar was to be set up in front of the Seoul city hall for citizens to pay respects.

Leading lawmakers of both ruling and opposition parties expressed condolences, as did the US ambassador to South Korea, Harry Harris.

Ruling party chief Lee Hae-chan said Park’s death was ‘shocking and regretful’, recalling him as an old friend who fought together for democracy during a dictatorship in 1980s.

Won-soon defended many political activists and in the 1990s won South Korea’s first sexual harassment conviction, in a landmark judgement.

He strongly advocated for the cause of ‘comfort women’ who were forced to work in Japan’s wartime military brothels before and during World War Two.

Park also praised women for their courage after a series of women accused powerful politicians and policymakers of sexual wrongdoings amid the #MeToo movement in 2018. 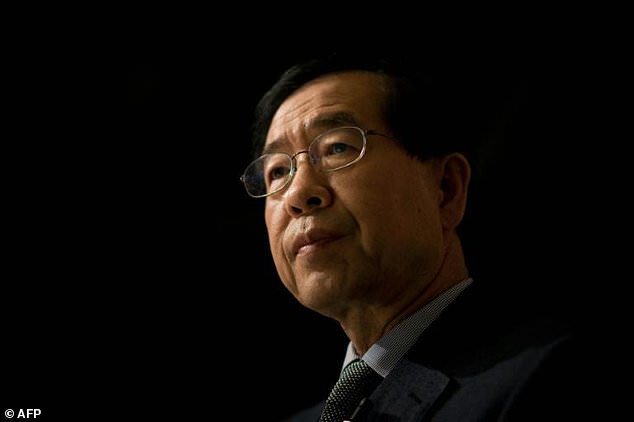 A heavyweight figure in the ruling centre-left Democratic party, he ran South Korea’s sprawling capital – home to almost a fifth of the national population – for nearly a decade.

He won three elections while promoting gender and social equality, and did not shy away from expressing his ambitions to replace incumbent President Moon Jae-in in 2022.

South Korea remains male-dominated despite its economic and technological advances, but the country has seen a widespread #MeToo movement in the last two years, sparked by a prosecutor who publicly accused a superior of groping her at a funeral.

Perpetrators have included a former provincial governor who sought the presidency in 2017 but was jailed last year for sexual intercourse by abuse of authority, after his female assistant accused him of repeatedly raping her.

Won-soon is the country’s highest-profile politician to take his own life since former president Roh Moo-hyun, who jumped off a cliff in 2009 following questions over corruption allegations involving family members.

Won-soon was a student activist in the days of South Korea’s military dictatorship – he was jailed for taking part in a rally against then-president Park Chung-hee – and later became a human rights lawyer.

He defended many political activists and in the 1990s won South Korea’s first sexual harassment conviction, in a landmark judgement.

It grew into one of the largest non-profit organisations in South Korea and launched the Beautiful Stores, a chain of charity shops modelled after Britain’s Oxfam shops. 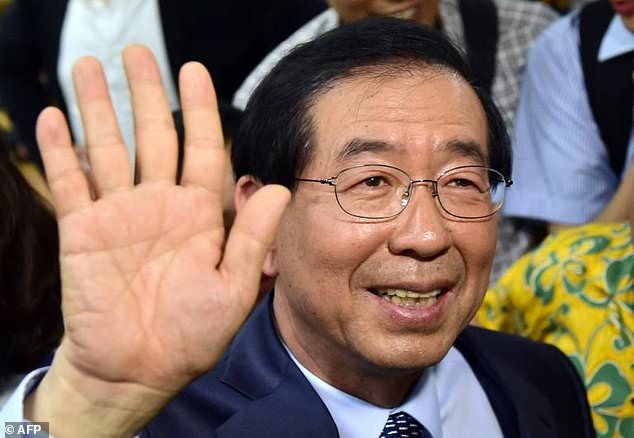