The number of landlords operating as limited companies has doubled since 2017, as they try to cut their tax liabilities and mitigate the cost of rising mortgage rates.

Hamptons says it is likely more buy-to-let companies will be set up in 2022 than in any previous year, as the environment for landlords becomes more uncertain.

The number of buy-to-let companies has increased by more than 50,000 in the past 12 months

The news comes amid a backdrop of rising taxes for landlords. Until 2017, landlords could deduct all mortgage interest from their rental income and only pay tax on the difference, meaning they made larger profits.

But today, landlords must add rental income to their other income and pay income tax on the amount in full.

They then receive a basic rate tax credit at a maximum of 20 per cent of their mortgage interest. This effectively means they are paying tax based on revenue not profits.

Those buying properties in a limited company structure are still able to offset their mortgage interest for tax purposes – though they may pay higher mortgage rates due to their company status.

Kwasi Kwarteng’s ill-fated mini Budget last month also provided a small boost for some landlords moving their properties from a personal structure into a company one.

The former chancellor removed the 5 per cent stamp duty bracket for buy-to-let properties. As a result, buyers of properties up to £250,000 will only pay 3 per cent tax.

As landlords transferring from personal to company ownership effectively ‘sell’ their properties to the new company, stamp duty usually applies based on its market value. 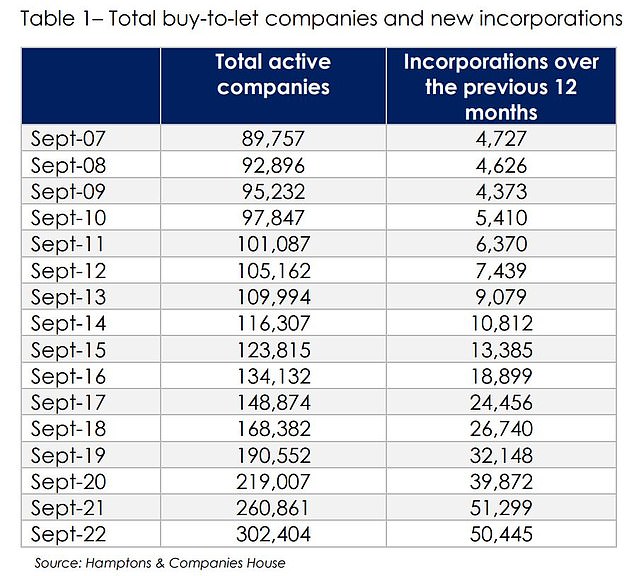 Aneisha Beveridge, head of research at Hamptons, said: ‘The number of new incorporations is likely to remain relatively high over the next 12 months on the back of the stamp duty cut, which saves the average investor just under £2,000 when moving a buy-to-let from personal to company names.

‘But the big driver is the financial advantage of being able to offset mortgage payments as interest rates rise. This means that limited company investors stand a better chance of turning a profit in a world where mortgaged landlords are coming under increasing pressure.’

How much are buy-to-let mortgage rates going up?

As mortgage rates rise, landlords may decide to increase rents to make up the difference. But Beveridge says that rent rises typically only cover a fifth of the increase in landlords’ mortgage payments.

Hamptons says a landlord who bought an average home two years ago with a typical 25 per cent deposit would need to increase their equity from 25 per cent to 55 per cent in order to maintain the same monthly returns compared to when they first bought.

On 1 October last year the average mortgage rate for a two-year fixed buy-to-let deal was 2.92 per cent, according to Money Facts, a year later it has risen to 5.57 per cent.

Five year fixes have seen a similar increase rising by 2.87 per cent to 6.05 per cent. The average for a five-year buy-to-let mortgage is now nearly 7 per cent at 6.68 per cent.

The average higher-rate taxpayer purchasing a buy-to-let today with a 6 per cent interest rate faces a £1,716 annual tax bill despite making a loss of £2,479, according to figures from Hamptons.

Meanwhile the same landlord with a property held in a company structure would not pay any tax, limiting their annual loss to £1,604. A lower-rate taxpayer would face a loss of £763.

Rents continue to rise across the UK

Although rental growth is slowing, rents have continued to tick up across the UK according to Hamptons.

Nationally, the average cost of a new let rose 6.9 per cent over the last 12 months, down from 7.4 per cent in August, with London seeing the highest growth in rent inflation.

However, many landlords are still considering selling their investment properties. 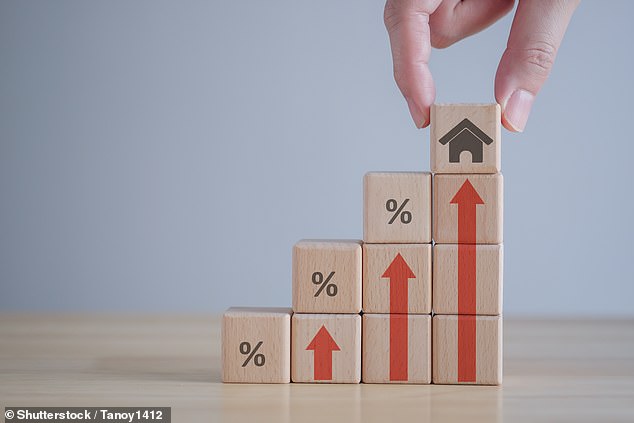 Up and down: Although rents are rising, the landlords’ gains are being cancelled out in some cases by higher mortgage rates

Jason Harris, managing director at Open Property Group, told This is Money that the company had seen a notable increase in the number of landlords looking to sell their properties and leave the market over the past six months.

‘Four weeks ago I remortgaged a property at 4 per cent on a 5 year fix, and the same mortgage last week cost 7 per cent. The different is the profit. You are running a business with no profit and very little chance of capital growth because of the overall economy,’ he says.

He also said that the requirement all rental properties have an environmental rating of C or above from 2025 needed to be reconsidered in order to keep landlords from leaving the sector.

He called on the Government to downgrade the requirement to ‘at most a D’, to reduce the cost of bringing homes up to standard.

Currently only 40 per cent of properties meet the standard, leaving 60 per cent requiring upgrades. 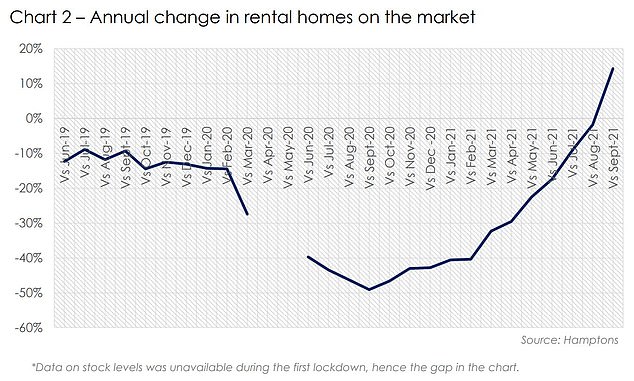 However, Adam Evans, mortgage consultant at Manchester Money says that while landlords are worried about rising mortgage costs, he isn’t seeing many opting to sell. Instead, he says, they are sitting tight and considering their options.

‘I have seen the concerns of people coming to the end of their deal, and it has caught them by surprise,’ he says.

‘They are asking, “Do we have the market to sell the property?” It’s a tougher market than it was six months ago.’

September saw the first annual increase in the number of homes available to rent in five years, although demand still outstrips availability across the country.

Across Britain there were 14 per cent more homes available to rent than in September 2021.

Stock levels may remain up on last year, however they are unlikely to rise far beyond 2021’s lows and remain 47 per cent below 2019 levels.

According to Rightmove, demand for rental properties outweighs supply across the country, although outside of the capital the number of properties available to let has risen 9 per cent. However, in the same period demand increased 20 per cent.