Looking to get your Land Rover serviced? Try putting ‘drift.dates.soup’ into your navigation system and you should end up exactly at a South London service center.

The unique software divides the globe into a grid of trillions of 3m x 3m squares, and has given each one a unique combination of three words: a What3words address.

As well as providing an exact location, What3words works without mobile signal through its ‘always-on’ capability, enabling users to navigate to their destination even in remote areas, or parts of South London suffering from a lack of signal.

Jaguar Land Rover is equipping its cars with the navigation tool via a software-over-the-air update, including some of those already on the road that can take the updates.

Once updated, the technology allows users to input What3words addresses directly into the navigation bar on their vehicle’s internal system.

But that won’t replace putting the postcode in first, instead What3words is designed to get people to a much more precise location than the more vague result postcodes deliver, or often unsatisfactory experience of trying to type in a street address.

Chris Sheldrick, What3words CEO and co-founder, told This is Money that users will need to know the three word address before inputting it to the car.

‘The best thing to do is to put the postcode into the system which is fine to get you to the right area on the map, and then click the exact square for where you’re aiming for,’ he says.

‘Around the UK we are gaining a lot of popularly and adoption and more What3words addresses are appearing on contact us pages, and people are sharing them between friends and family or within communities such as walking groups.’

Sheldrick stresses that What3words shouldn’t be seen as a replacement for a postal address, but an ‘overlay’. The aim of the system isn’t to be a conversion from a postcode, but for people to find the exact location they are searching for – possibly using a postcode as a starting point.

Drivers looking to find their destination’s What3words address will need to go online to the company’s website or download its app.

It is, its website says, ‘a useful addition when street addresses are not accurate enough, and an instant, scalable solution where addresses do not exist’. 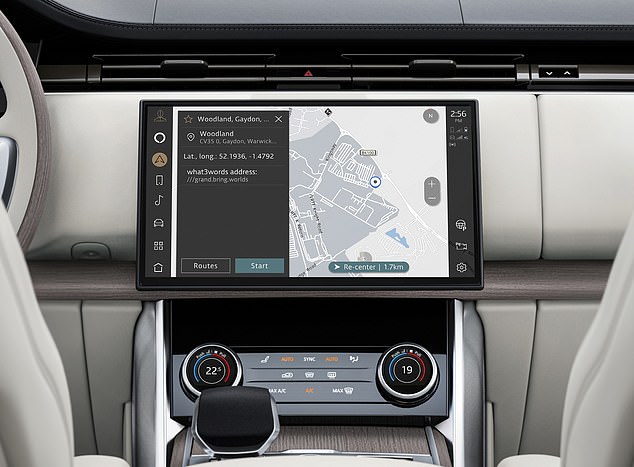 Drivers will need to find the three word address of their destination before setting off, but can do this via the company’s website or via its downloadable app.

The integration of What3words into Land Rover Jaguar vehicles has been delivered by HERE Technologies, Jaguar Land Rover’s navigation partner for the past 25 years. HERE’s end-to-end, connected driving services include turn-by-turn guidance, real-time traffic and on and off-street parking.

Mark Carter, navigation product owner, digital product platform at Jaguar Land Rover, said: ‘This world-changing technology is all about simplification, providing our customers with a seamless modern luxury experience that means they can find their way anywhere in the world without having to worry about connectivity.

The partnership with What3words, enabled by HERE Technologies, further highlights our world-leading SOTA capability which allows us to offer services that are always on and always connected.’

It is not the first time Jaguar Land Rover and What3words have partnered. In 2018, the two worked together to help improve healthcare administration on the remote Scottish island of Mull. 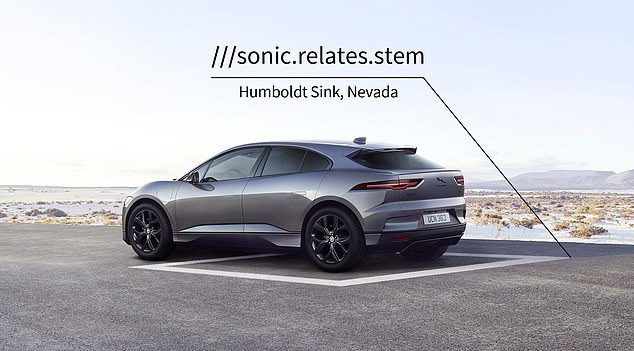 The system is not designed to replace postcodes or street addresses but is intended to be used as an overlay to provide greater accuracy.

The announcement is the latest in a string of developments for What3words. Since launching in July 2013, as a more accurate alternative to street addresses, the technology is now used in over 193 countries and by thousands of businesses. There are 242 billion three word addresses in the UK alone.

Customers can now use their What3words address on DHL’s UK Parcel app to provide delivery drivers with the exact location of where they want their parcel to be left.

And in London the company has partnered with taxi dispatch firm Sherlock to offer precise What3words addresses for customers’ drop-off and pick-up points.

What3words is available to the public for free and select NGOs and emergency services can use its products on a greater scale for a nominal fee.

Currently around 85 per cent of emergency services in the UK use the technology and reports from responders attest to its value in more remote locations or open country such as an incident at a music festival.

Three word addresses – how do they work?

The app and website is free to the public to use

The mapping system was created by an algorithm that randomly assigns three words to the plot of land.

As the 3×3 global grid is fixed a What3words address doesn’t change even if the landscape evolves through building or otherwise. However, it is not without its issues.

Last year What3words was called into questions after it was discovered that thousands of locations with similar distinguishing words were less than a kilometre apart, leading to concerns that mistakes could easily be made and the wrong location provided.

But, Sheldrick says, instances of the wrong location being used are rare and will only occur if a mistake has been made in the process. It is not something that come up regularly in customer service feedback, he adds.

The company came to fruition when Sheldrick, working in the music industry, found getting artists and production teams to the right location wasn’t possible with just addresses and providing coordinates was cumbersome and unpopular.

Whether What3words is the future of navigation remains to be seen. For now the company is focusing on its international expansion, particularly within logistics and last mile delivery. It is also working with NGOs to improve access to essential services such as healthcare.

One example is Gateway Health which is using what3words to locate women in South African townships and transport them to hospital where they can give birth more safely.