LaLiga’s president Javier Tebas has launched another attack on the European Super League after a drama-filled derby between Real Betis and Sevilla.

Spanish giants Real Madrid, Atletico Madrid and Barcelona were among the original group of 12 European clubs who sought to break away from domestic competition in 2021.

Real and Barca want to revive the idea, still believing that the future direction of European football is to break away from LaLiga and UEFA to form their own lucrative competition. 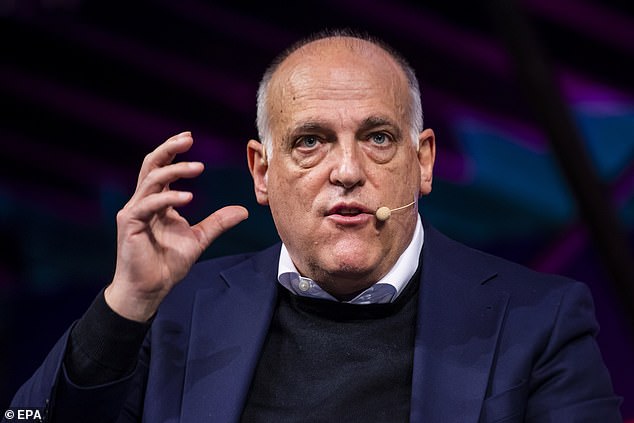 Tebas, one of the most outspoken critics of the Super League, tweeted a video of the stunning light show and musical performance ahead of Sunday night’s game at the Benito Villamarin stadium.

‘They say that they do not generate money and their matches are not “interesting” [crying face emoji]. What they have to learn.’

The Seville derby certainly lived up to the hype. Nemanja Gudelj salvaged a late point for Sevilla in a 1-1 draw after a Jesus Navas own goal gifted Betis the lead.

Tebas tweeted: ‘Spectacular! For A22 Sports [those from the Super League], Real Betis and their fans cannot play in the Super League, like so many clubs in Europe. ‘They say that they do not generate money and their matches are not “interesting” [crying face emoji]. What they have to learn.’ 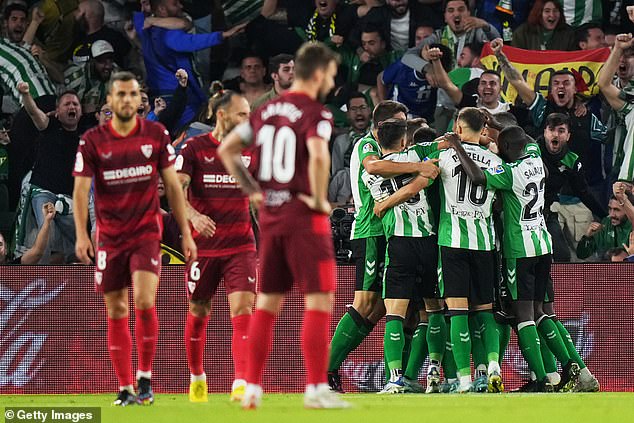 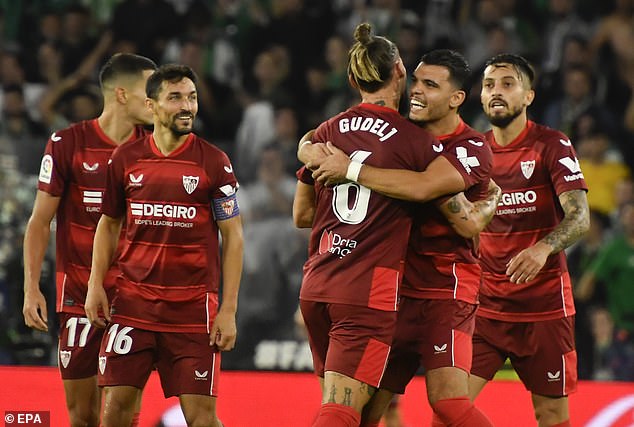 Sevilla celebrate their late equaliser, courtesy of Nemanja Gudelj as they grabbed a point 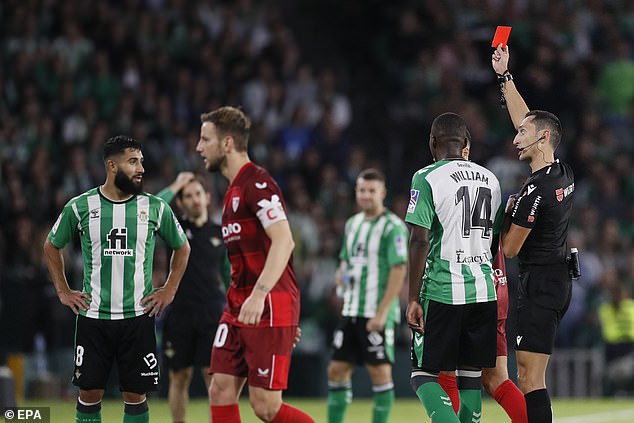 Two Betis players and one from Sevilla were sent off in a typically fiery atmosphere.

Tebas’s latest attack on the Super League came two days after LaLiga took aim at Real president Florentino Perez and his Barca counterpart Joan Laporta, who were instrumental in the plans.

The league quickly collapsed at the time following a backlash from supporters, not least of the six Premier League club who signed up.

The British government, UEFA and FIFA also strongly came out in opposition to the breakaway. 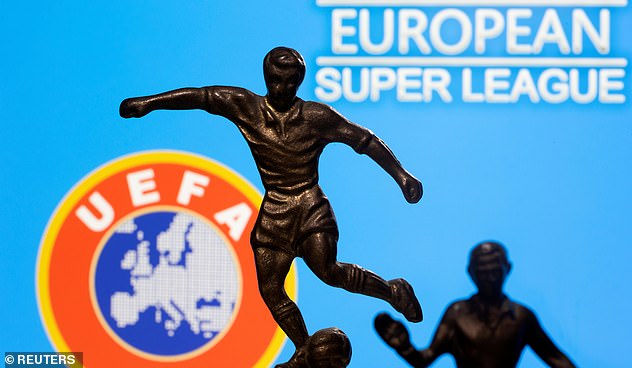 One of the key objections to the league from fans was its closed nature, with the premise being that 15 of the continent’s top clubs would be permanent members.

A video published on LaLiga’s Twitter account on Friday morning stated: ‘The whole of European football took a stand against the Super League’s closed, selifsh and elitist model.

‘The promoters of the Super League are trying to conceal its format, claiming that they still don’t have a fixed model, although it will be inclusive and open.

‘We know that this is false and that they want to present a semi-closed format similar to that of 2019, which has already been rejected by the clubs and (the) European Leagues (group).’

LaLiga sees this as a renewed attempt by the clubs involved to ensure participation in European competition, free from the risk of missing out in the event of a poor season in their domestic league. 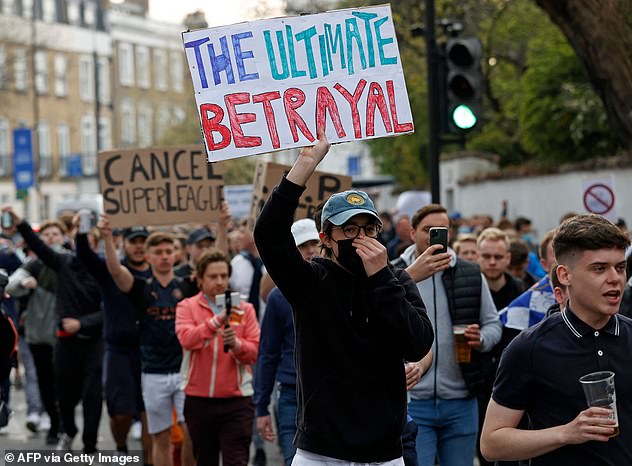 ‘This model is based on promotion and relegation between European divisions where the national leagues do not provide direct access to the top tier,’ the video stated.

‘On the contrary, they perpetuate the participation of a privileged view, even if they perform poorly in their domestic leagues.’

Tebas criticised recent efforts to reposition the league by A22, the company behind it, and said at last week’s Web Summit in Lisbon: ‘They maybe look like lambs, but they are in fact wolves. The same wolves as before.’

A22’s new chief executive, Bernd Reichart, spoke at the same event and said he had received an invitation to meet with UEFA, which would happen ‘soon’.

Reichart’s call for a meeting comes as A22 and UEFA await an update from the European Court of Justice.

The ECJ has been asked to rule on whether UEFA and FIFA abused a dominant position under EU competition law by blocking the formation of the Super League last year, and in seeking to sanction the clubs involved.

The Advocate General’s opinion on the matter is due to be published on December 15. That opinion is non-binding, but in many previous cases, the court judges’ final ruling has closely mirrored it, so it could provide a strong indication of the final outcome, which is expected next year.