The 32-year-old daughter of the Marquess of Milford Haven, the first cousin of the late Prince Philip, was snapped getting out of the wedding car as she arrived at the venue.

Sticking to tradition, Lady Tatiana wore a veil covering her face as she waited to enter the cathedral.

She opted for a white, full-length bridal gown, with cap sleeves, and an intricate sash which appeared to be decorated with white beading.

The bride wore white: Lady Tatiana Mountbatten, whose father was a first cousin of Prince Philip, wore a traditional white gown with a full skirt and cap sleeves for her wedding to Alick Dru at Winchester Cathedral today 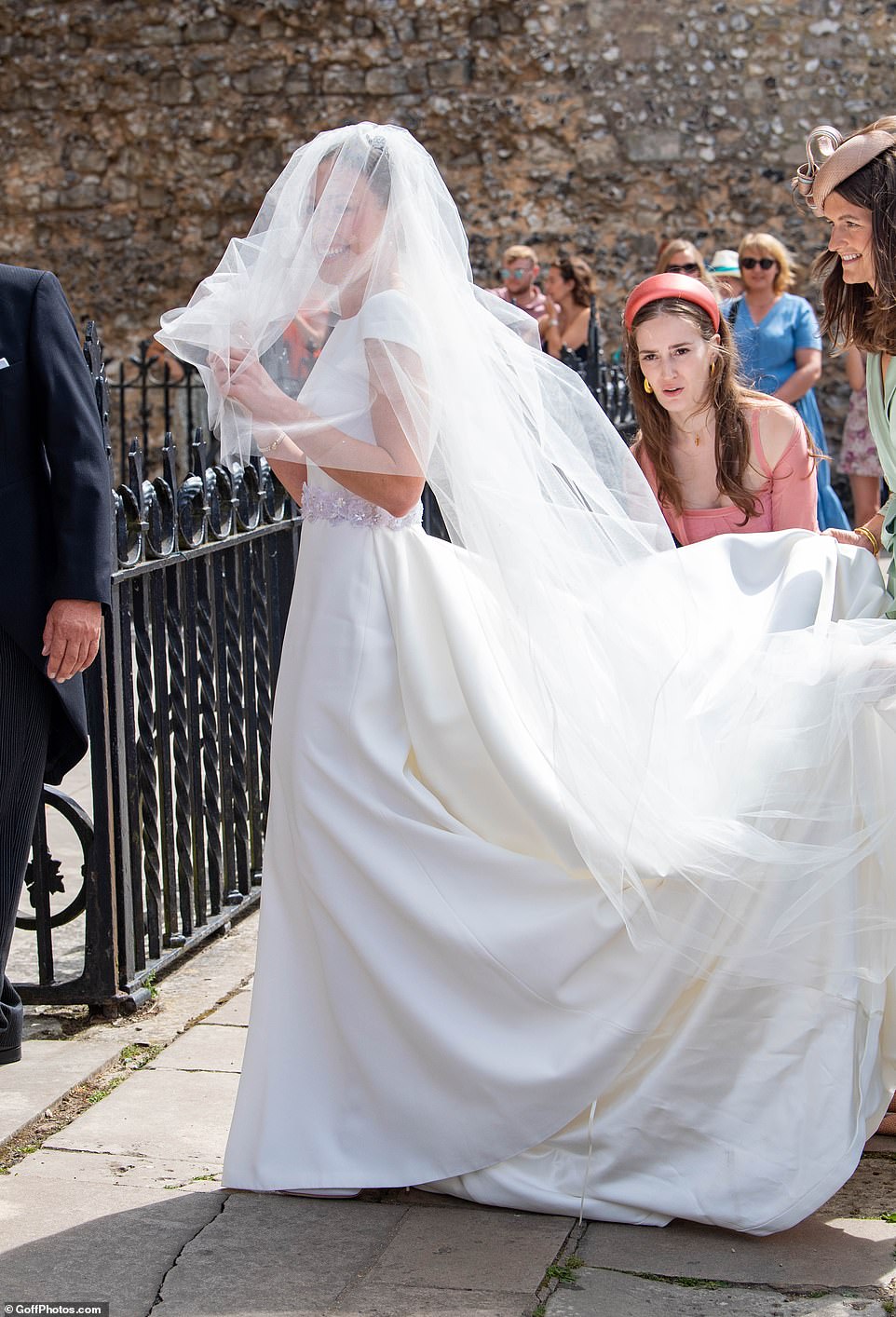 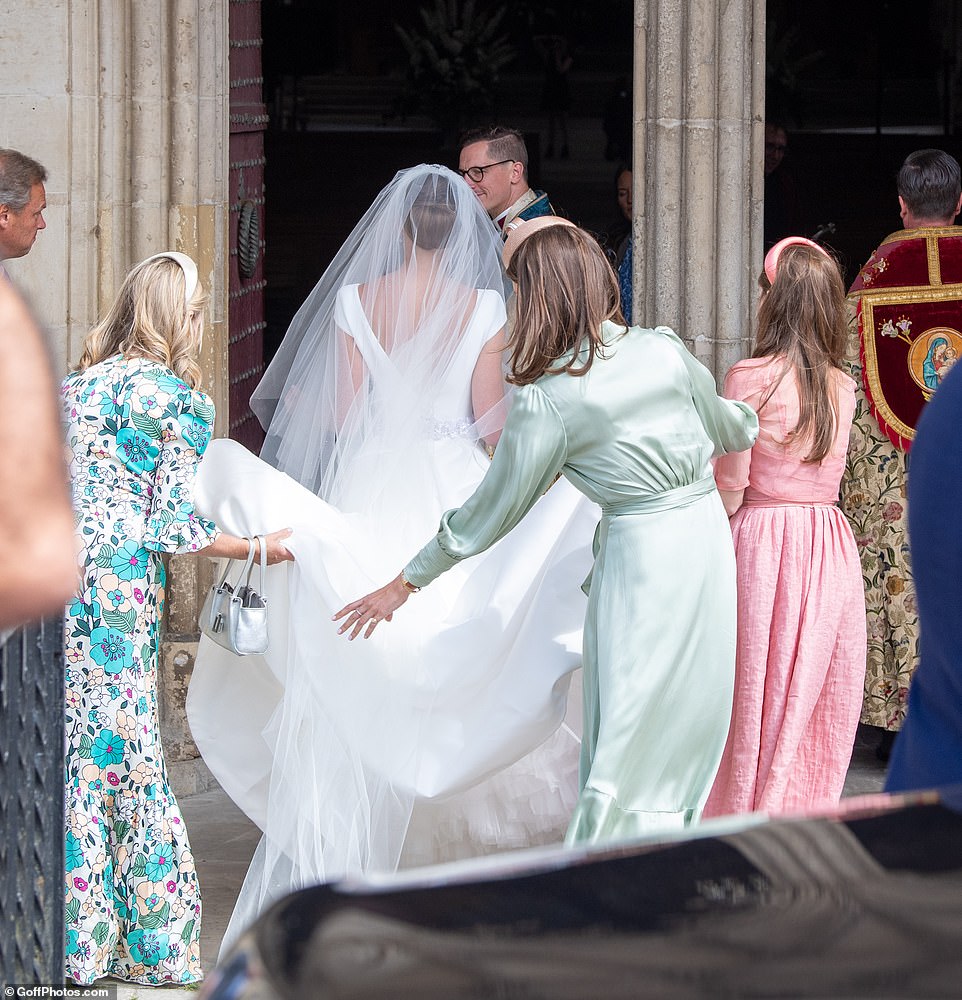 Images from the wedding show the bride’s stunning dress, and several people helping with her extravagant train 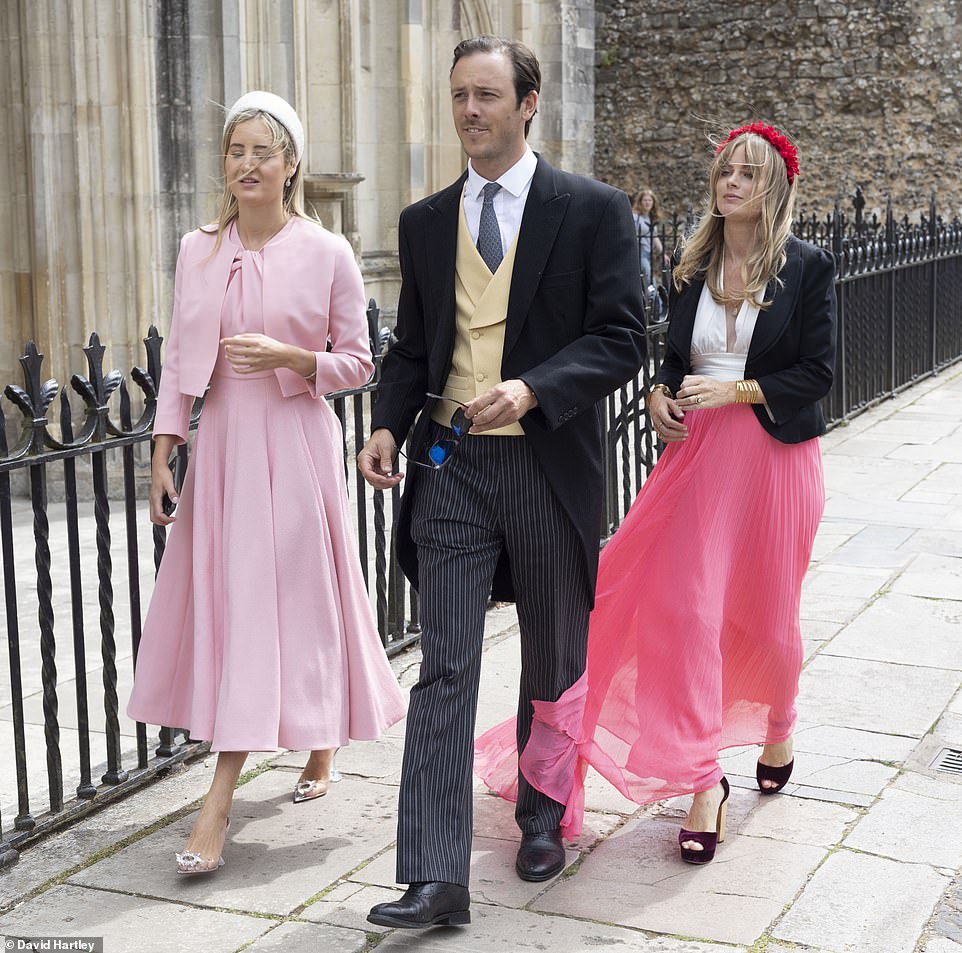 Among the guests was Prince Harry’s ex-girlfriend Cressida Bonas, who had previously congratulated the couple for their engagement when they announced it on social media 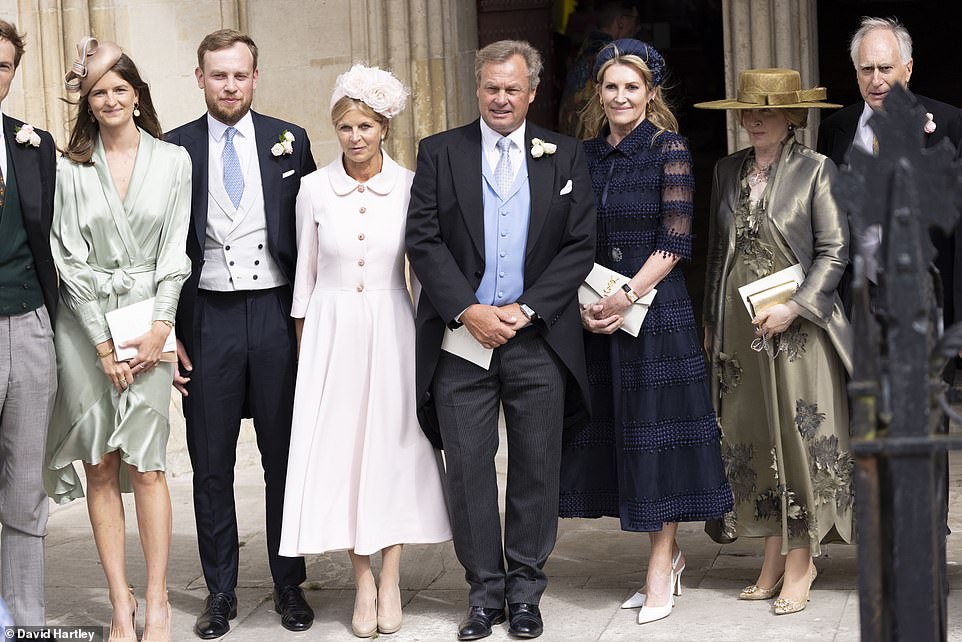 Pictures from the day show Cressida Bonas, a former girlfriend of Prince Harry, making her way to the ceremony.

Lady Tatiana revealed in January that Alick had popped the question, going down on bended knee while the couple were on a skiing holiday in the Alps.

The Old Etonian had taken the sparkler with him to Verbier, Switzerland, and chose the romantic mountaintop spot for the proposal. 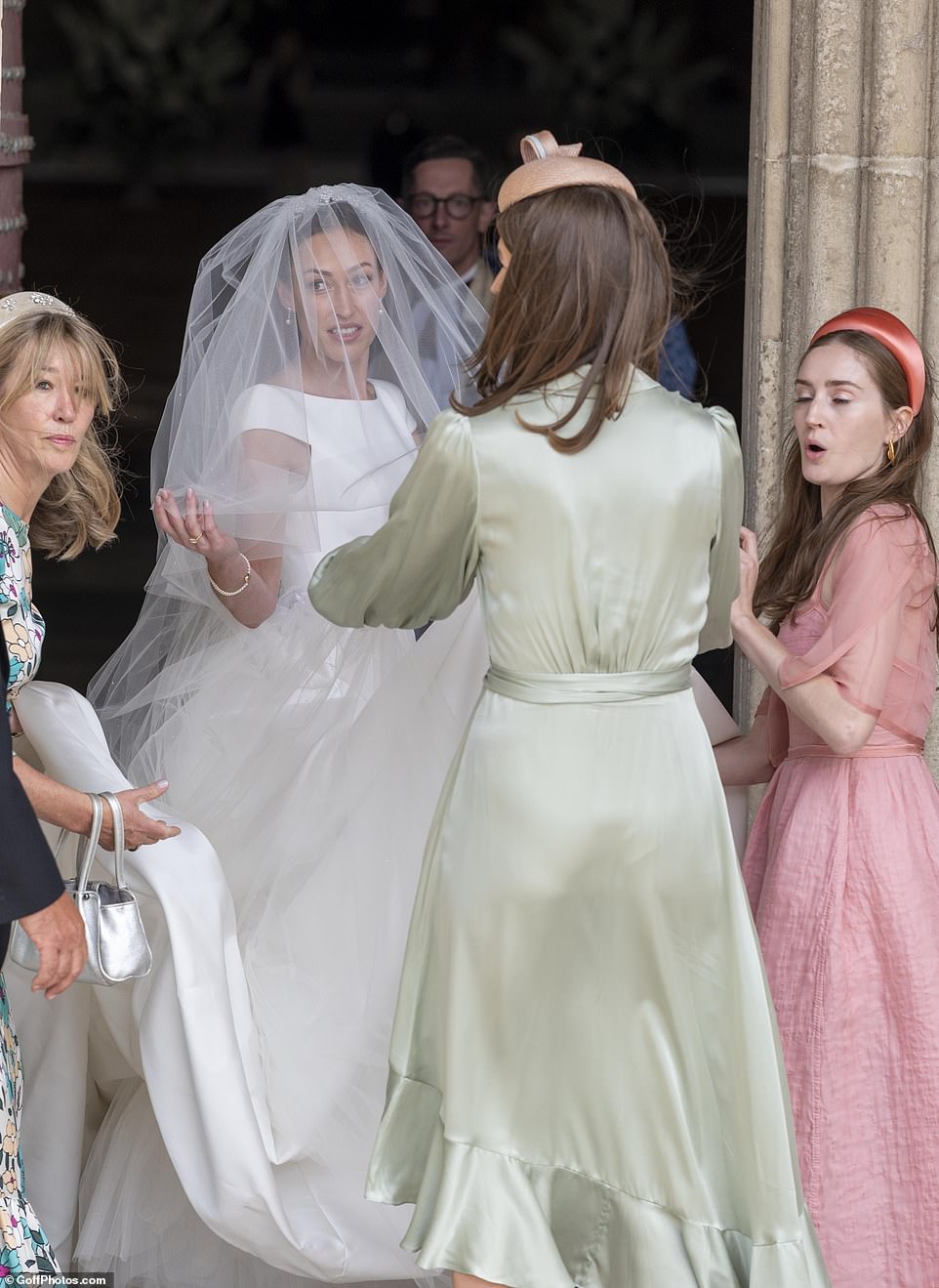 Tatiana opted for a traditional bridal look for her big day, donning a full-length white gown, and veil, as well as glittering accessories 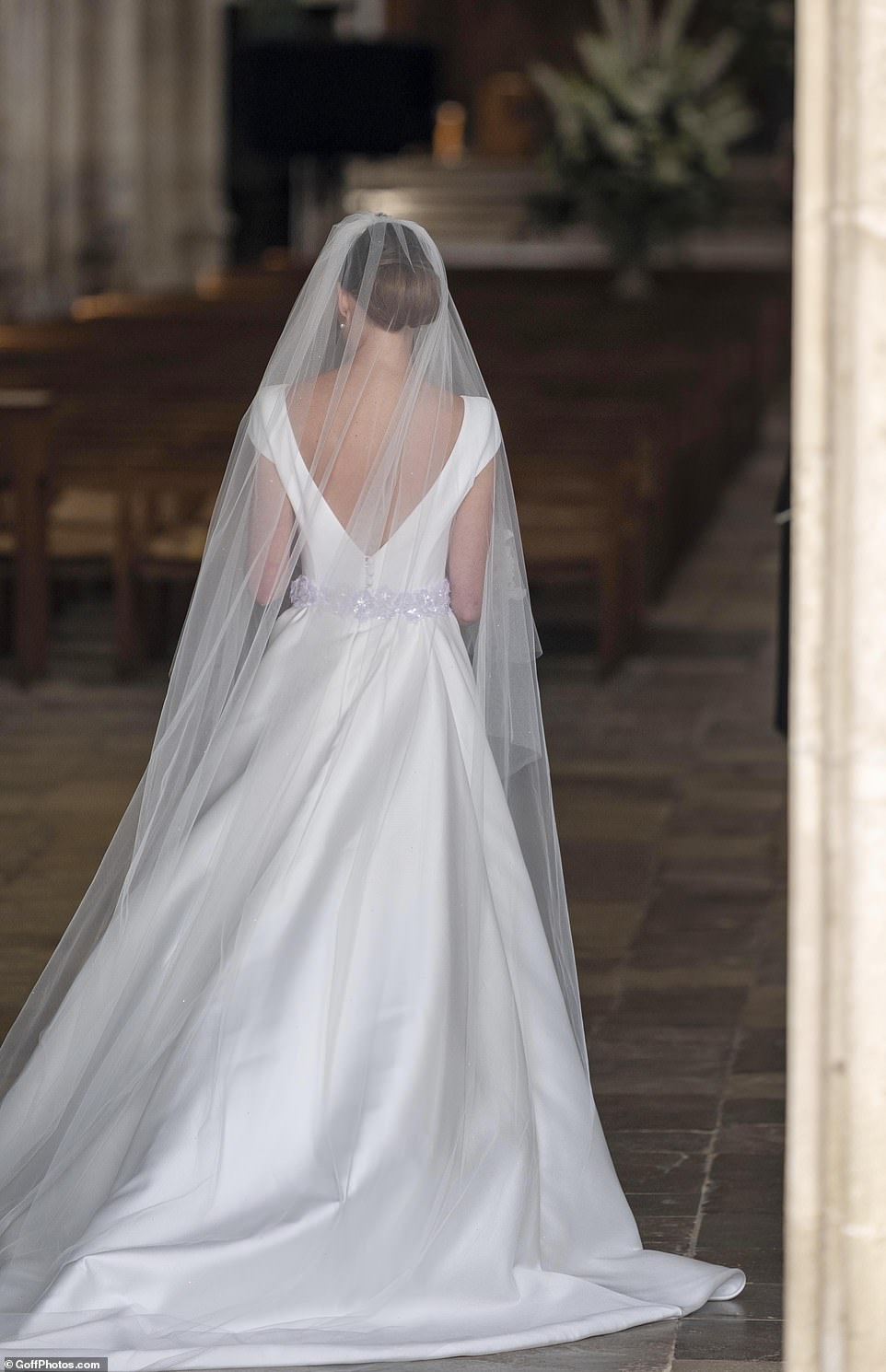 The bride wore a long veil over her white wedding dress, which featured a deep-v on the back, and an intricate sash 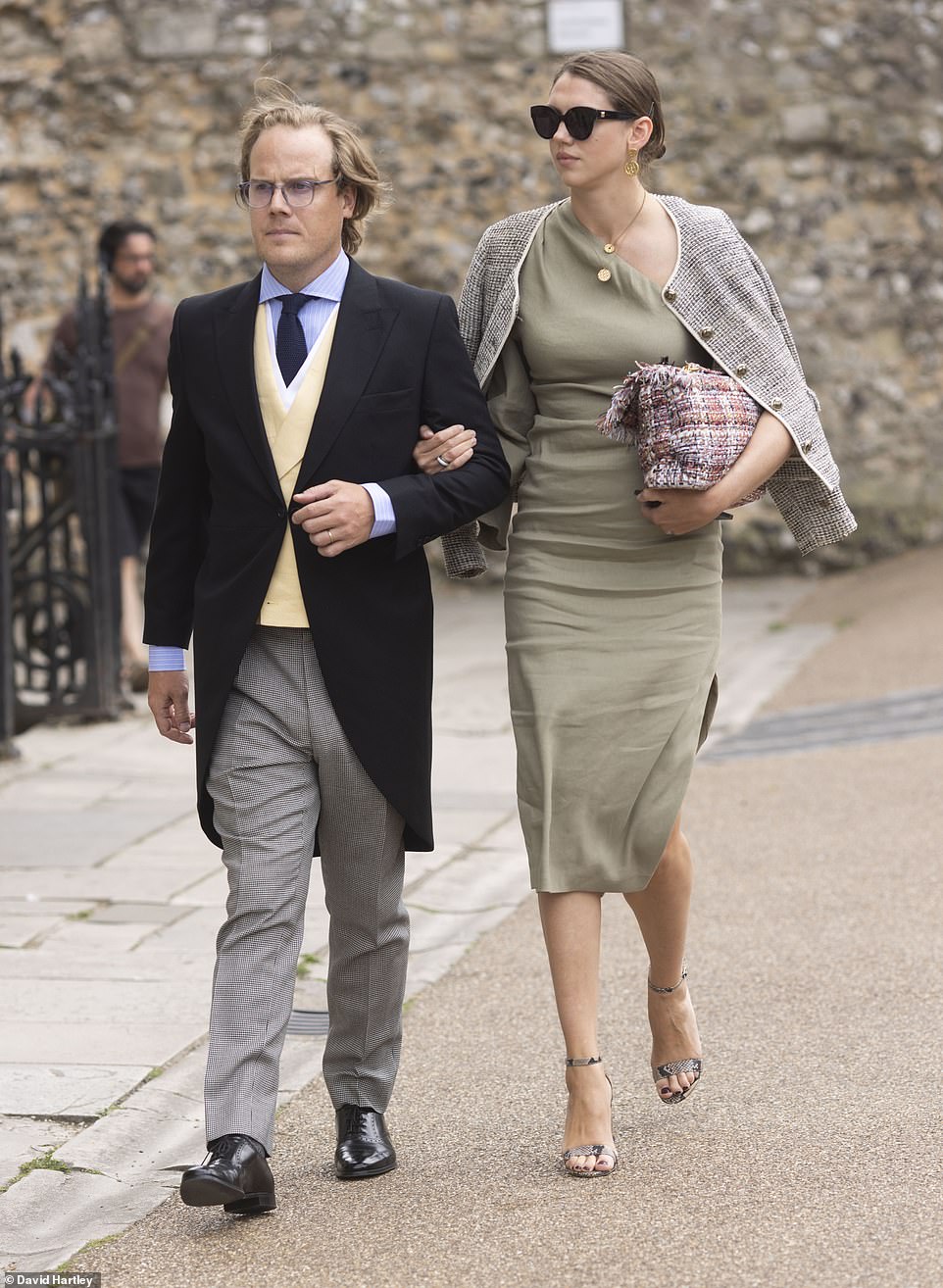 Guests were snapped as they made their way to the ceremony at Winchester Cathedral today, for the wedding of Lady Tatiana and Alick Dru

Cressida Bonas, a friend of the couple, donned a fuchsia maxi skirt and vertiginous velvet heels for the event

When Tatiana posted about the engagement on Instagram, Cressida Bonas was among those who congratulated the couple on the news of their engagement, writing: ‘Beauties’.

Close friend Violet Manners, daughter of the Duke and Duchess of Rutland who was on holiday in Verbier at the same time, also shared her well-wishes, writing: ‘Yes yes yes yes yes! So happy I got to see you both glowing this week. Big love xxxx.’ 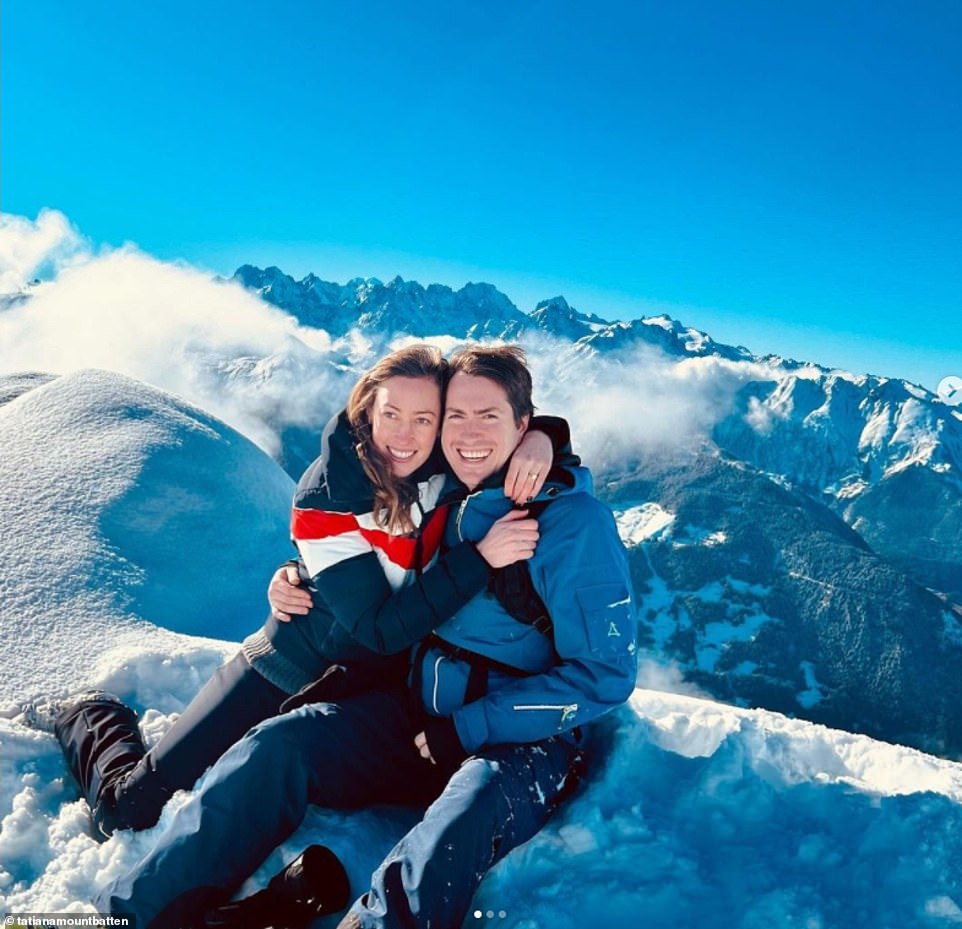 On top of the world! Lady Tatiana revealed that she was engaged in by sharing a series of candid snaps shared on Instagram in January 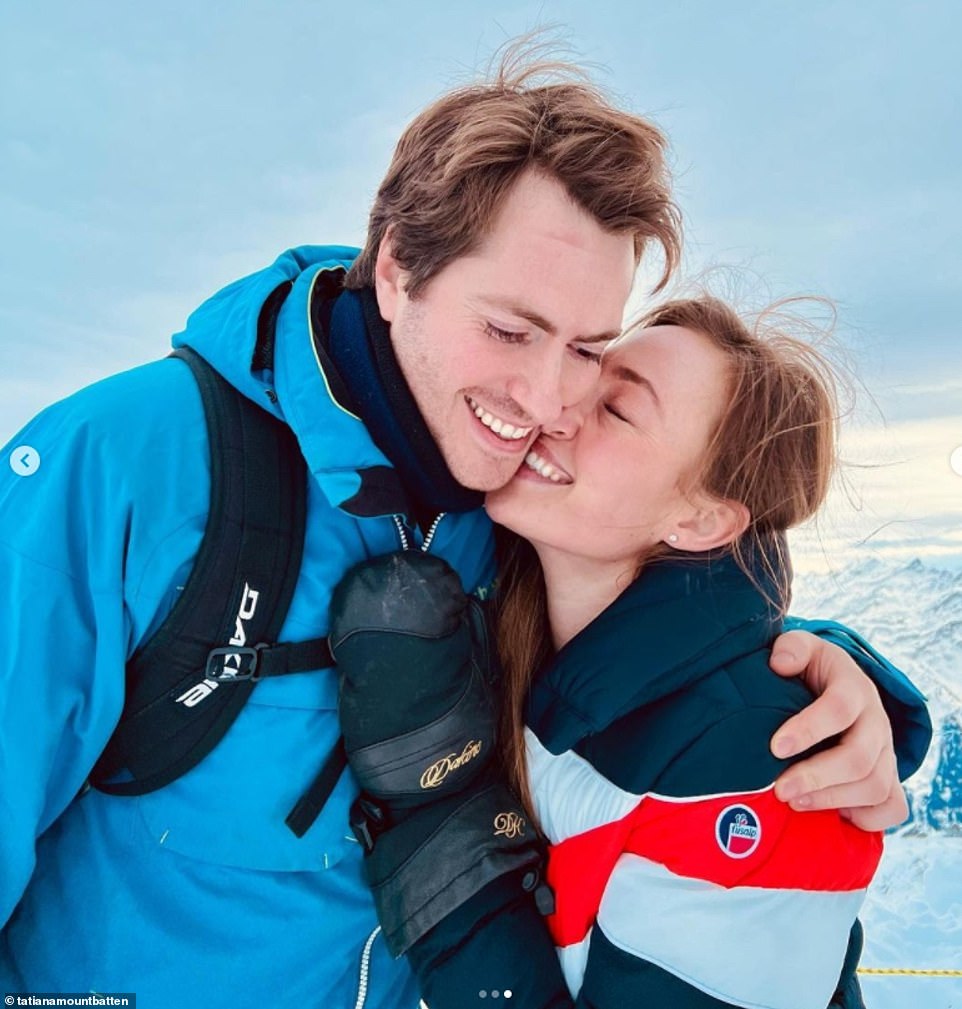 Love is in the air: Old Etonian Alick had taken the sparkler with him to Verbier, Switzerland, and chose the romantic mountaintop spot for the proposal. Pictured, in the Instagram snaps 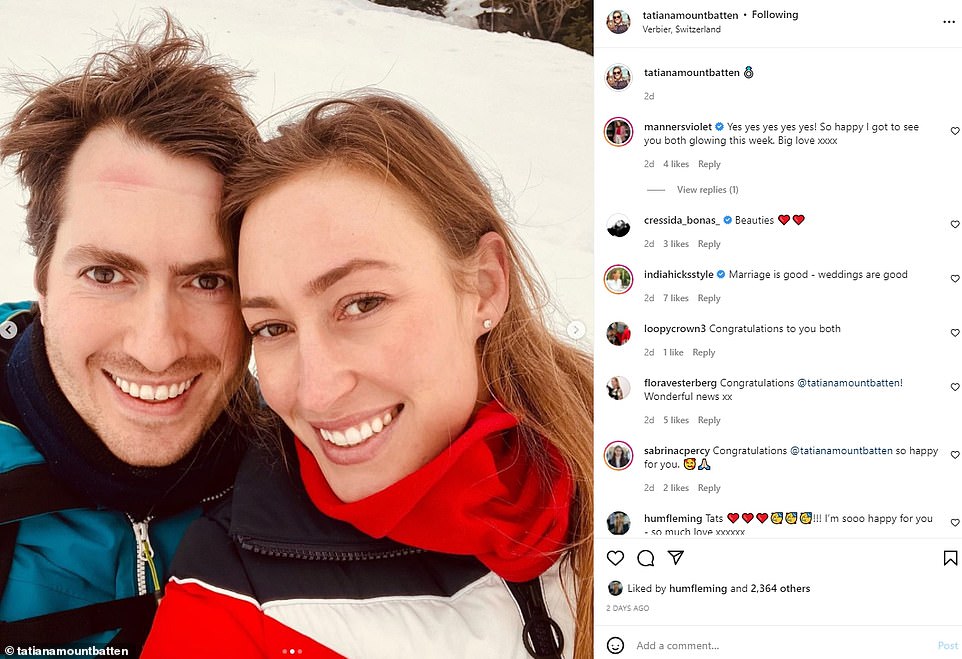 Time to celebrate! The couple beam in the candid snaps taken moments after the engagement, with dressage rider Tatiana wrapping her arm around Alick

Equestrian Lady Tatiana is the eldest child of George Mountbatten, 60 – whose brother Lord Ivar Mountbatten is the first openly gay member of the Royal Family – and his first wife Sarah Georgina Walker. He is now married to Clare, 61.

Her younger brother Henry, 30, is Earl of Medina.

Although he does not herald from the same standing as his new fiancée, Alick’s family tree is still dotted with landed gentry.

His father, known as Bernard, is the son of Major Alexander Dru and Gabriel Mary Hermione Herbert, and is a descendent of both John Vesey, 4th Viscount de Vesci, and Henry Howard Molyneux Herbert, 4th Earl of Carnarvon. 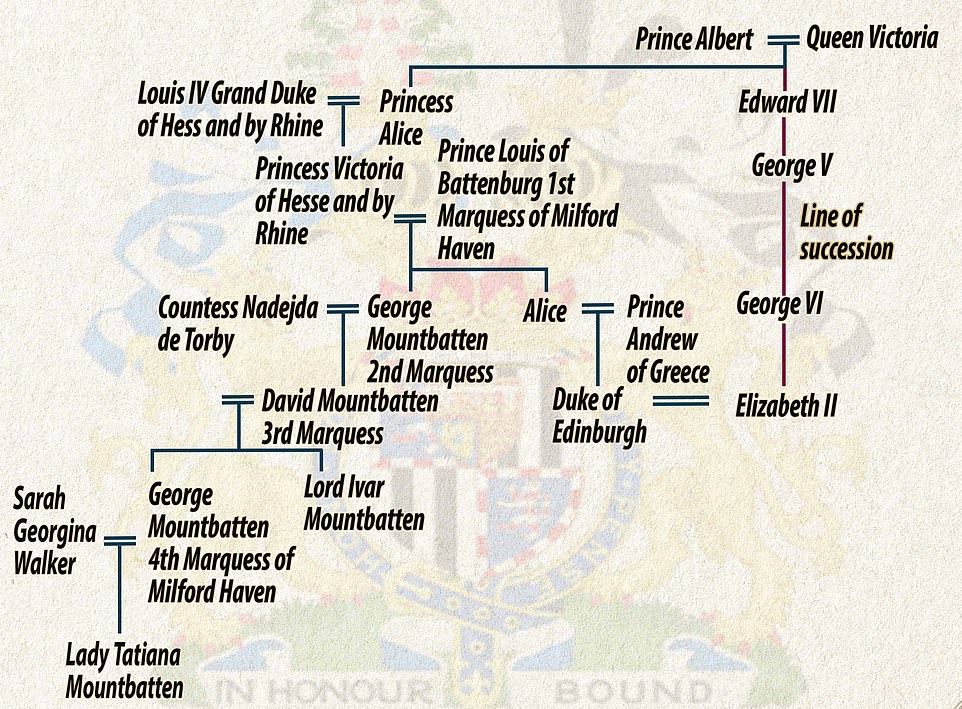 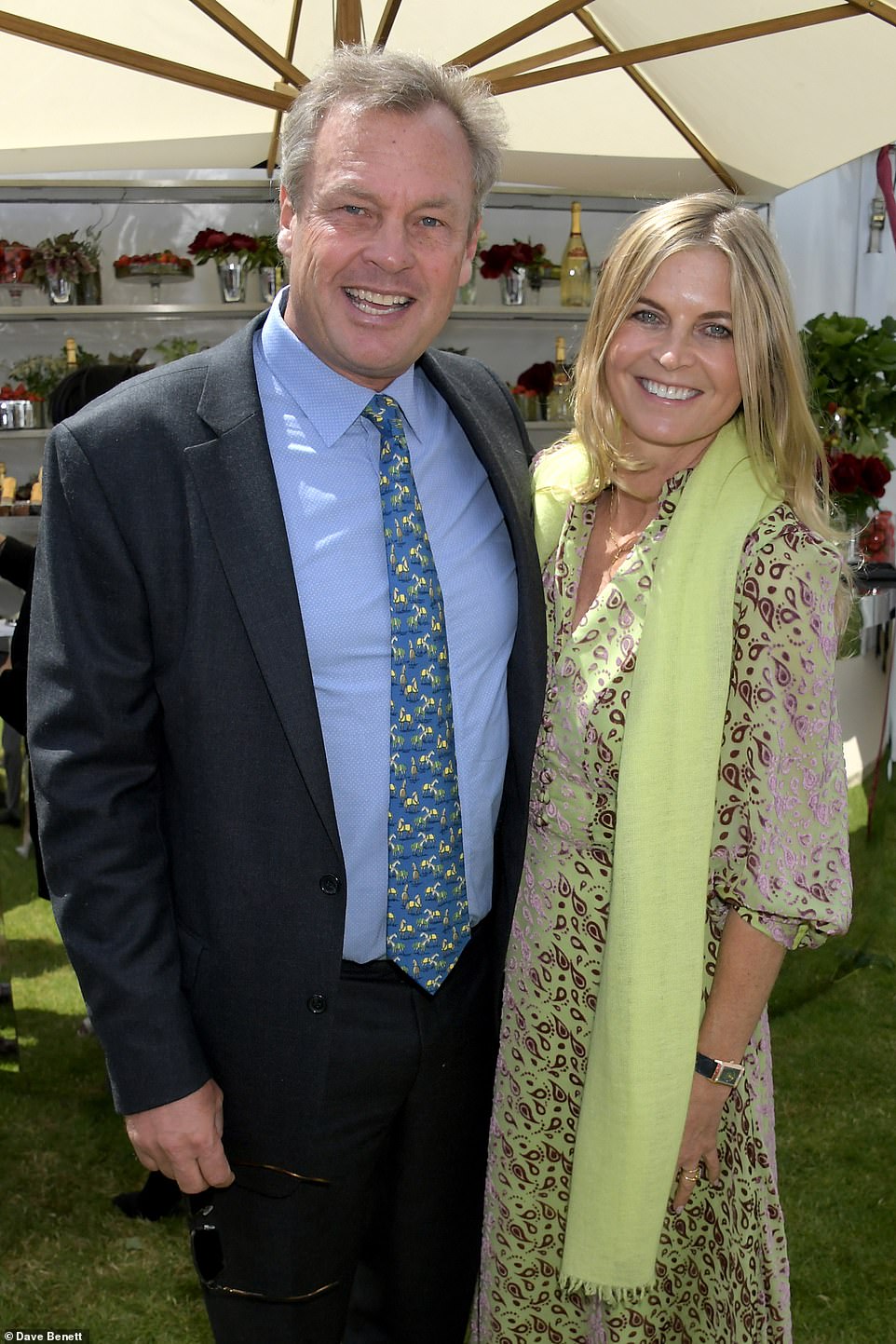 Proud father: Equestrian Lady Tatiana is the eldest child of George Mountbatten – whose brother Lord Ivar Mountbatten is the first openly gay member of the Royal Family – and his first wife Sarah Georgina Walker. He is now married to Clare. Pictured, George and Clare

Together with his wife, Bernard now runs Bernard Dru Oak Ltd, which produces and installs high-quality oak flooring, ‘sustainably sourced’ from woodlands in the Haddeo Valley. They live in Bickham Manor in Timberscome, Somerset.

Alick was educated at Eton and studied History at Oxford before finding Tripr, a social travel app, for ‘travellers [who] would want to meet other travellers, as well as their friends.’

After working on Tripr, Alick founded Spires Tutoring, before leaving the world of start-ups behind for a role on the M&A team at management consultancy Strategy&.

This was followed by a two-year stint as an investor at SoftBank Investment Advisers.

Now Alick is back in the world of startups.

In July 2021 he founded a so-called stealth startup, a startup company that operates in stealth mode, i.e. that avoids public attention. This may be done to hide information from competitors, or — as part of a marketing strategy — to manage public image.

Meanwhile Tatiana, who trained under Olympian Charlotte Dujardin, was educated at the elite £12,000-a year Millfield private school in Street, Somerset. 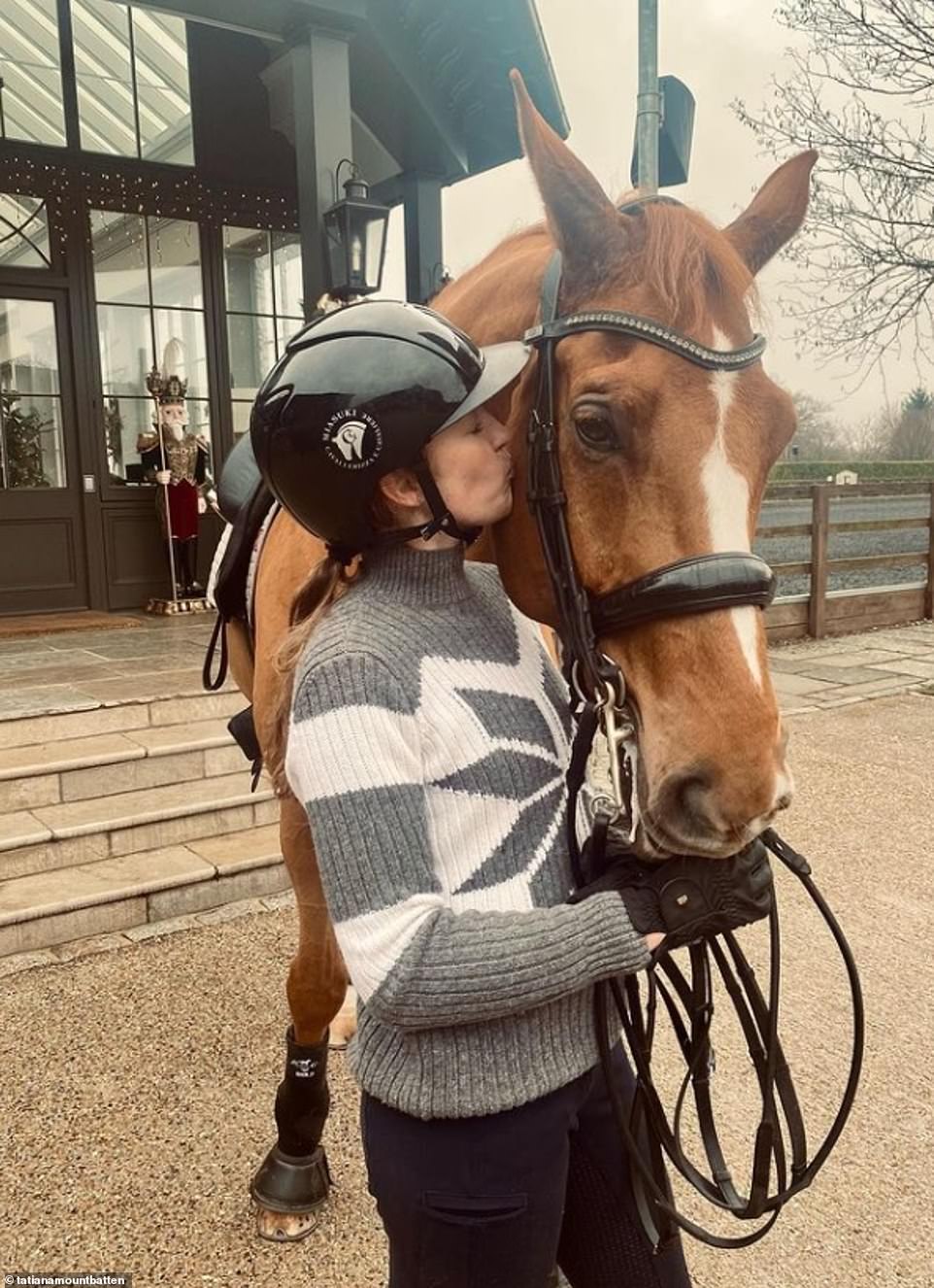 Horse-mad: Dressage rider Tatiana, who trained under Olympian Charlotte Dujardin, was educated at the elite £12,000-a year Millfield private school in Street, Somerset

Society beauty: Lady Tatiana Mountbatten at a Tatler party (left) and at Royal Ascot with Alick

Horse-mad Lady Tatiana once wanted to be a ski instructor, but now works training dressage horses.

Her polo-playing father George swelled his fortune by founding and selling price-comparison company uSwitch, and is thought to live in Switzerland.

After stints in Denmark and Germany, ‘Tatty’ has settled in Windsor, where she runs a very smart horse yard.

Her personal website reads: ‘All you really need to know is that I spend every day doing what I love more than anything in the world; riding horses.

‘I’m a professional dressage rider based in Windsor. Here, I train a couple of my own horses and some horses which have been put in training with me by some wonderful people who have trusted me with the education and career of their horse.

Tatiana is also training to be a psychotherapist.