Labour strategists are plotting to ‘outflank’ Boris Johnson on law and order by portraying leader Sir Keir Starmer as an heroic figure who helped to prevent a ‘British 9/11’.

As part of Sir Keir’s drive to rebuild his party’s credibility, the strategists will highlight Sir Keir’s role as Director of Public Prosecutions (DPP) in what Theresa May described as ‘one of the most significant terrorist plots the UK has ever seen’.

As DPP, Sir Keir oversaw the prosecution of the terrorists involved in an Al Qaeda plan to place suicide bombers on board seven flights leaving Heathrow for North American cities, after the plot was disrupted by the security services’ Operation Overt.

Three men were convicted in September 2009, but Sir Keir successfully sought a retrial of three further suspects after a jury failed to decide whether they were guilty, and they were subsequently found guilty of plotting to murder in 2010.

The plot led to the introduction of restrictions on liquids that passengers are allowed to carry on board aircraft. A Labour source said: ‘It is going to be hard for Boris to beat a CV like that – and to be able to assume that the Tories will automatically be regarded as the party of law and order.’

As DPP, Sir Keir Starmer (pictured) oversaw the prosecution of the terrorists involved in an Al Qaeda plan to place suicide bombers on board seven flights leaving Heathrow for North America

Ironically, the new Labour bid to make a virtue of the party leader’s barrister past comes after repeated attempts by Mr Johnson to taunt Sir Keir for being out of touch with public opinion because of his ‘lawyer’ background.

But it also comes after Sir Keir specifically invoked his previous role as DPP last week to fend off Mr Johnson’s attempt at Prime Minister’s Questions to tar him with former Labour leader Jeremy Corbyn’s perceived sympathies for the IRA.

In a heated exchange, the Prime Minister tore into Sir Keir for having supported Mr Corbyn, ‘an IRA-condoning politician who wanted to get out of Nato’.

Visibly angered, Sir Keir replied: ‘As DPP, I prosecuted serious terrorists for five years, working with the intelligence and security forces and with the police in Northern Ireland. I ask the Prime Minister to have the decency to withdraw that comment.’

Speaker Sir Lindsay Hoyle has now issued what is being taken as a warning to Mr Johnson to tone down his behaviour, saying everyone needed to be respectful of others in the Commons chamber.

Labour sources also hit back later by pointing out that the Prime Minister had supported a peerage for former Brexit Party MEP Claire Fox, who had once been a member of a far-Left party which defended an IRA attack. 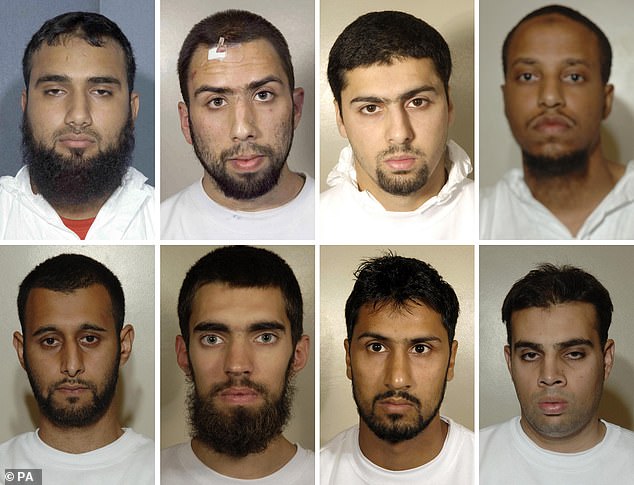 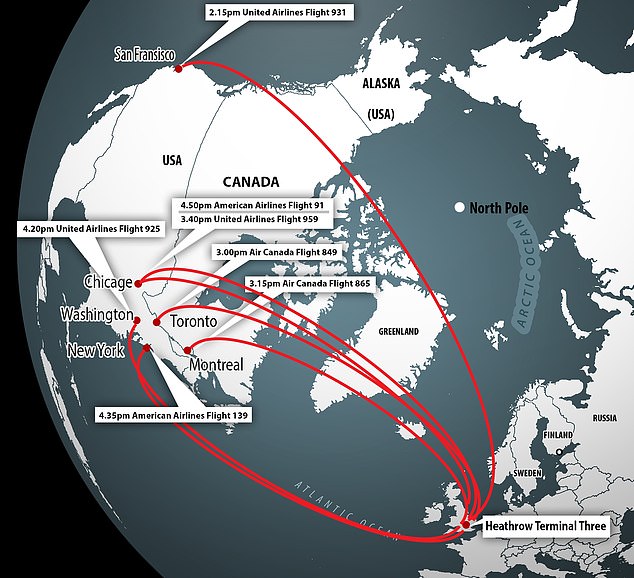 The men plotted to blow up seven planes mid-flight, leaving from Heathrow Terminal Three, in what Theresa May described as ‘one of the most significant terrorist plots the UK has ever seen’. Pictured: The routes of the planes leaving Heathrow to North America

The Labour re-positioning comes amid mounting unease among Tory backbenchers at how often Mr Johnson is outperformed by ‘charisma-light’ Sir Keir in the Commons.

One senior Tory MP told The Mail on Sunday: ‘Boris should realise that playing the showman and hurling off-the-cuff insults at Starmer is not the way to deal with him.

‘He should respond to each of Starmer’s questions seriously and soberly – not try to raise a cheer from Tory MPs with some new swipe at him. His current approach just isn’t working.’

But last night, Tory MP David Morris mocked the bid to portray the Labour leader as a hero.

He said: ‘I’m sure that, as DPP, Sir Keir played his part in those important prosecutions.

‘But when it comes to electing a Prime Minister, the British people do it on the basis of a politician’s all-round abilities – not the size of his ego.’