A Government laboratory in Maryland plans to make the circulating monkeypox strain more lethal in highly controversial research in mice.

The team wants to equip the dominant clade – which mostly causes a rash and flu-like symptoms – with genes from another strain that causes severe disease.

They hope the experiment will reveal how different genes make monkeypox more deadly, and spur the development of better drugs and vaccines for humans.

It comes just a week after DailyMail.com revealed a similar experiment involving a hybrid Covid strain was conducted at Boston University.

But the modified virus ‘poses an exceptionally high risk’ to the public if it accidentally leaks, according to Dr Richard Ebright, a microbiologist at Rutgers University in New Jersey.

The team in Maryland would argue their work does not involve ‘enhancing’ a pathogen because they are swapping natural mutations rather than creating new ones, meaning the hybrid cannot be more deadly than the existing clades.

But the news will no doubt surprise many Americans that such research continues to go on in the US despite fears similar practices may have started the pandemic.

There have been more than 27,000 cases of monkeypox in the US since the current outbreak took hold earlier this year 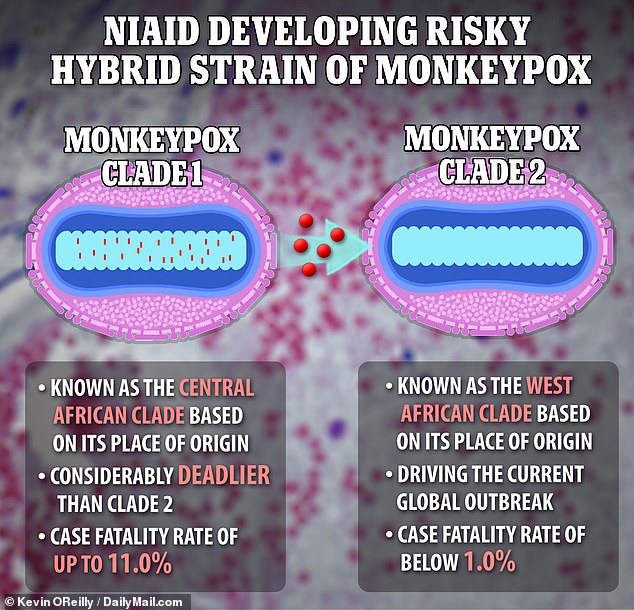 The Maryland study will involve extracting dozens genes from the more severe clade 1 (pictured left) monkeypox virus and putting them into the less virulent clade 2 virus. They will then infect mice with the hybrid virus and monitor how the disease progresses 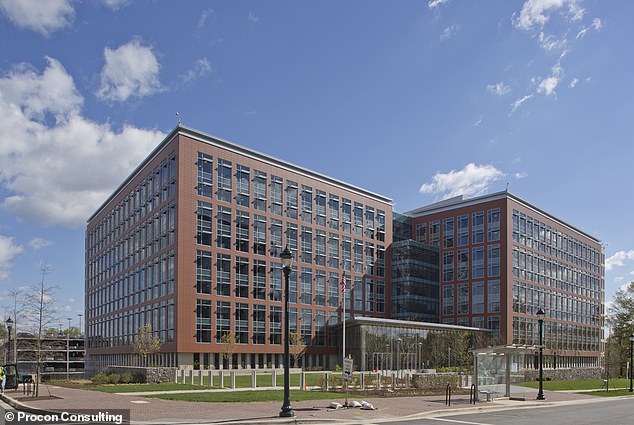 The Maryland team’s work is being led by NIAID scientist Bernard Moss at the agency’s headquarters in Bethesda.

This phase of the study will involve extracting dozens genes from the more severe clade 1 monkeypox virus and putting them into the milder clade 2 virus.

They will then infect mice with the hybrid virus and monitor how the disease progresses.

The team had initially attempted the reverse: swapping genetic materials in the less virulent clade into clade 1 to make it less deadly, but without success.

The current global outbreak is confirmed to be driven by clade 2, the less deadly West African monkeypox strain, which has a mortality rate of less than one percent.

Clade 1, meanwhile, kills one in 10 people it infects. It has its origins in the Democratic Republic of the Congo and primarily spreads in the Congo Basin. 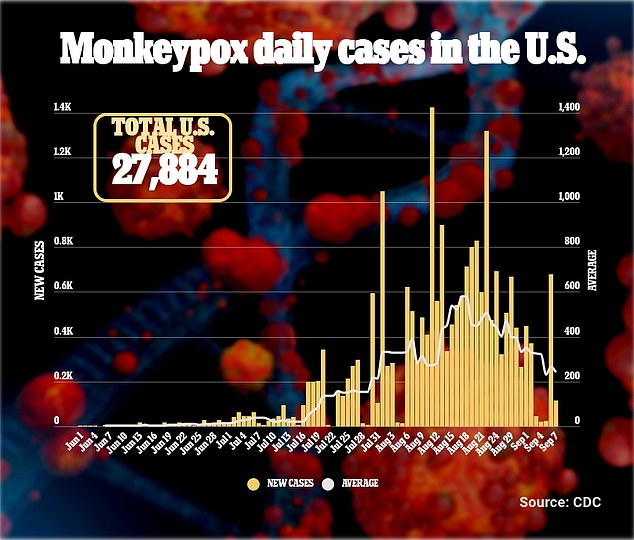 Cases of monkeypox are in decline after peaking over the summer

The White House announced plans to crackdown on viruses manipulation research only days after DailyMail.com uncovered similar research being undertaken at Boston University.

In a national biodefense strategy unveiled last week, the Biden Administration laid out plans to prevent and respond to future biological disaster situations like the COVID-19 pandemic.

The report highlights the risk of ‘accidental biological threats’ caused by accidents in biosafety labs which work with dangerous pathogens.

Researchers defended the work, claiming it could advance our understanding of Covid and how to treat and vaccinate against it, but critics warn the benefits do not outweigh the risk of a potential leak.

Biden’s biosafety plans, which were published two days later on October 19, says the ‘United States has a responsibility to ensure our technology, development, and assistance programs do not exacerbate this risk [a lab leak] unintentionally’.

The White House report also accepts that the ‘risk of laboratory accidents may be increasing with the rise in the number of laboratories around the world conducting high-risk life sciences research and research with potential pandemic pathogens’.

There is no suggestion that the report is a response to the work at Boston University, and DailyMail.com has approached the White House for comment.

But the report gives a nod to the potential dangers of so-called ‘gain of function’ research, when a virus is enhanced to be more dangerous or infectious so scientists can get ahead of potential outbreaks or develop therapies.

Researchers equipped the original Wuhan strain of Covid with Omicron’s spike protein – the part which helps it invade cells and makes it more infectious. Critics say the combination of increased infectiousness and lethality made it dangerous.

The Maryland experiment was exempt from oversight when it was given the green light in 2018 because monkeypox did not meet the threshold for a ‘potential pandemic pathogen’.

To be considered a PPP, the pathogen has to be widely transmissible with the potential of spreading uncontrollably and being highly dangerous.

But at that time, monkeypox outbreaks were confined to Africa and the virus did not spread easily between people.

US cases could almost always be traced back to imported animals or travelers who had visited Central or Western African countries.

Now, with monkeypox widespread and more than 26,000 US cases, the National Institutes of Health (NIH) is planning to reexamine the work.

But the study still might not qualify as ‘enhancing’ a PPP, the agency says, because the team are using existing mutations.

Dr Ebright told DailyMail.com: ‘A laboratory-generated monkeypox virus… more lethal than, and as transmissible as, the monkeypox virus currently circulating in humans potentially likely would defeat protection by vaccines and likely would spread beyond current at-risk populations to the general population.

Amid growing concern about such experiments, the NIH and the  Department of Health and Human Services met last month to devise recommended rule changes to the NIH’s Potential Pandemic Pathogen Care and Oversight policy.

The rule change, if adopted next year, would place stricter regulations on the kind of research on monkeypox viruses set to begin at NIH.

The latest controversy surrounding risky monkeypox research comes on the back of years of ferocious debate over gain of function research, which many believe resulted in the Covid pandemic.

The pandemic shed a light on the risky research practices, which the government has funded for decades with pushback, having temporarily paused in 2014 only to resume three years later.

High-profile debates about the merits of gain of function remain centered on the unproven theory that the coronavirus escaped from a lab in Wuhan, China.

It comes after DailyMail.com revealed that a team from Boston University had developed a hybrid Covid virus — combining the Omicron and original Wuhan strains — which had an 80 per cent lethality rate in mice.

Researchers equipped the original Wuhan strain of Covid with Omicron’s spike protein – the part which helps it invade cells and makes it more infectious.

Some experts defended the work, claiming it could advance our understanding of Covid and how to treat and vaccinate against it, but critics warn the benefits did not outweigh the risk of a potential leak.

The hybrid strain was of immediate concern due to its combination of the worst attributes of the virus – Omicron’s high rate of transmissibility and the original’s high lethality.