She tagged along with her father Travis Scott earlier in the week at the ribbon-cutting ceremony for an elementary school garden in Houston.

And Kylie Jenner’s daughter Stormi Webster got a chance to watch her father perform in front of an enormous crowd on Friday when she attended his Astroworld festival in the Texas city.

Even as she was enjoying the superstar treatment, several fans throughout the festival reportedly suffered serious injuries and had to be rushed to the hospital.

All to herself: Kylie Jenner, 24, illustrated her three-year-old daughter Stormi Webster’s VIP experience at her dad Travis Scott’s Astroworld Festival on Friday by snapping a photo of her trailer

Kylie shared some short videos and photos from the festival, including a special trailer with Stormi’s name affixed to the door.

The three-year-old joined her mother in the crowd in another video that showed Travis’ high-energy performance, featuring incredible pyrotechnics.

As he warmed up the crowd in one clip streams of fire shot high into the air.

The scene had to be incredibly loud, but luckily Stormi was wearing large headphone as hearing protection. 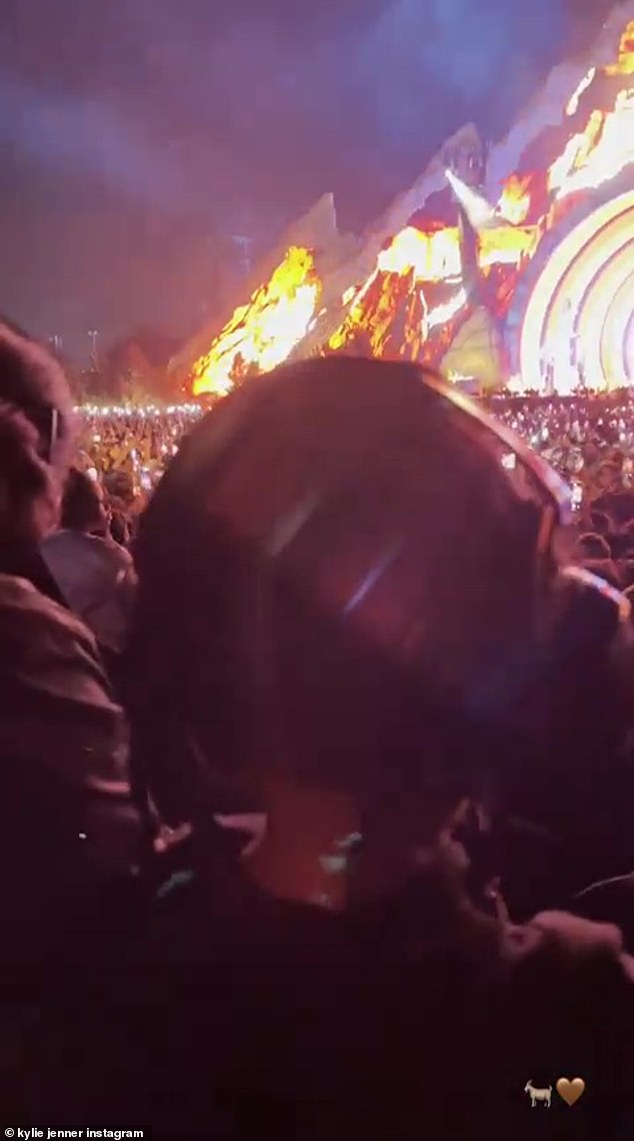 In the thick of it: The three-year-old joined her mother in the crowd in another video that showed Travis’ high-energy performance, featuring incredible pyrotechnics 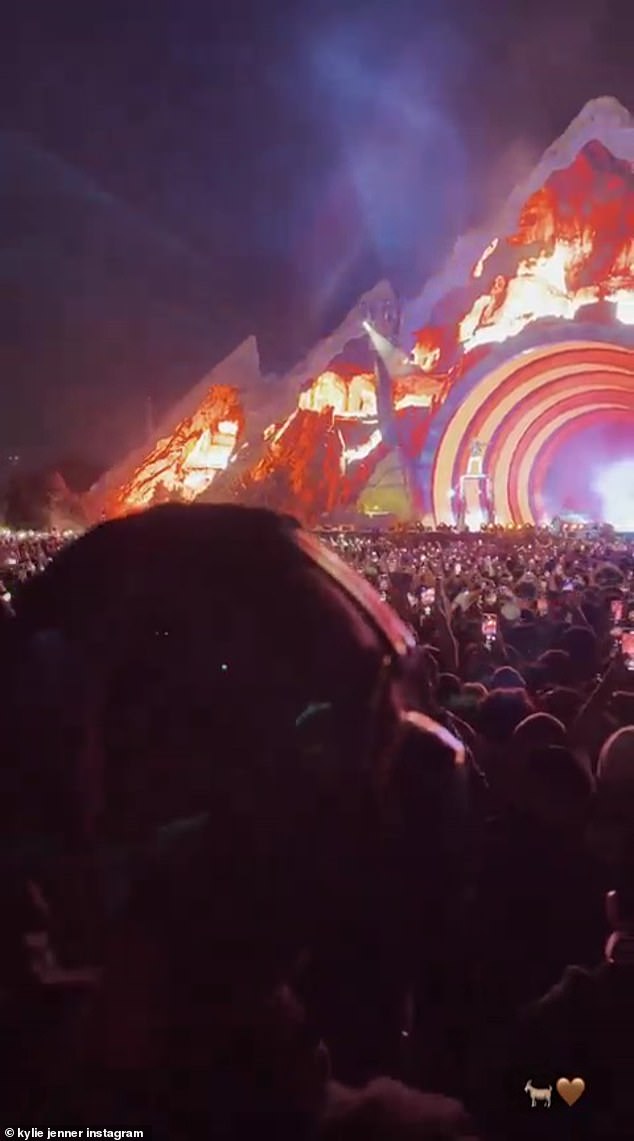 Safety first: The scene had to be incredibly loud, but luckily Stormi was wearing large headphone as hearing protection

Kylie caught the back of her head as she watched the show and captioned it with a goat emoji and a brown heart.

Travis was performing in front of a circular opening on a set shaped like a mountainscape.

The view was partly a façade made of video screens, and the craggy rocks were replaced by other images in subsequent clips.

Travis was seen rapping on a raised platform in another video.

The top of the mountain erupted in fireworks later in the show. 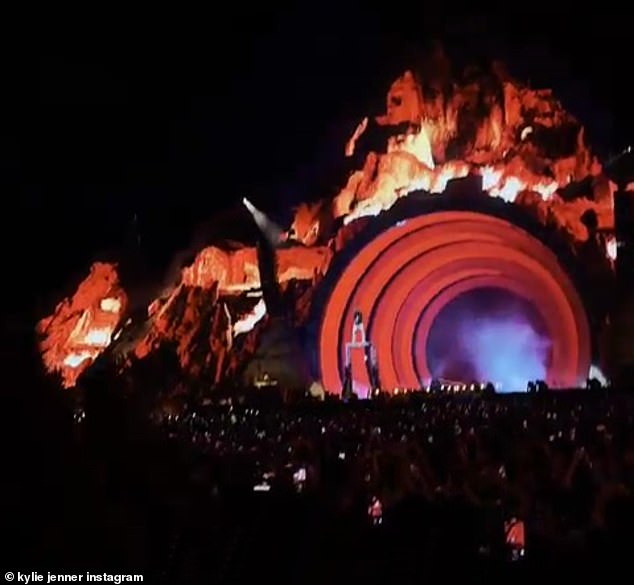 Intense: As he warmed up the crowd in one clip streams of fire shot high into the air 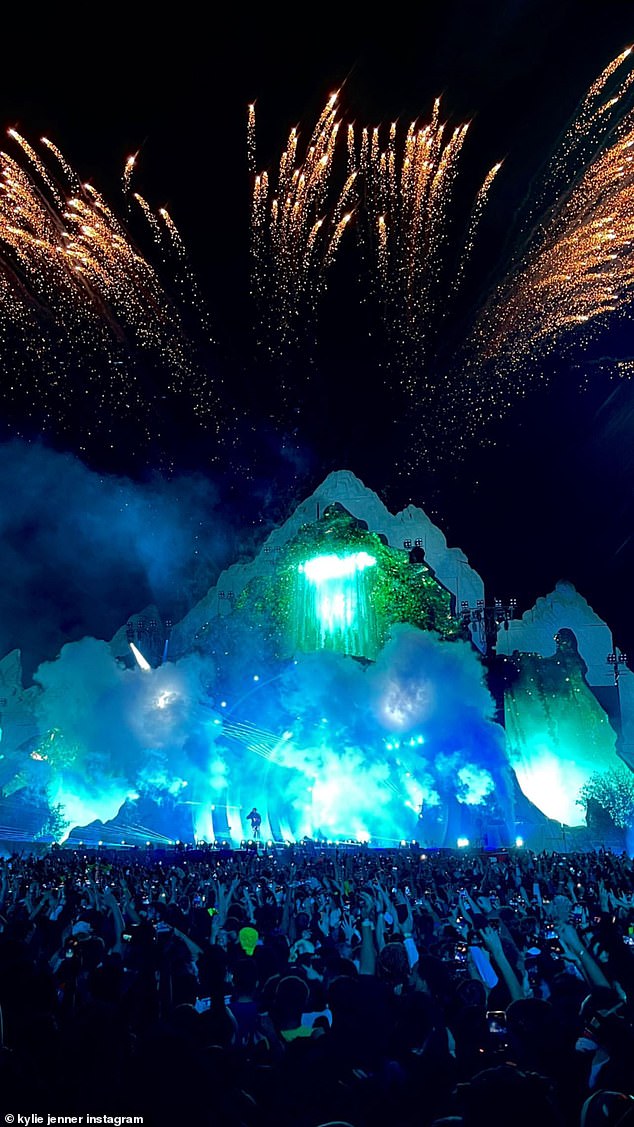 Stunning: The top of the mountain set erupted in fireworks later in the show

Stormi has been tagging along with her father since she accompanied him and her aunt, grandmother and great-grandmother when Travis dedicated a student garden at Young Elementary School that was partially funded by his Cactus Jack Foundation.

She seemed to be getting the VIP treatment over the weekend at Astroworld, though several attendees weren’t as lucky.

The Houston Fire Department told ABC 13 earlier in the day that CPR was performed on at least two people at the festival.

Dozens of ambulances and EMTs were seen carrying for injured attendees, and social media posts showed multiple people receiving CPR, while others appeared to be bleeding profusely.

KHOU reporter Zack Tawatari tweeted that ‘several people’ had been transported to the hospital from the festival grounds.

It remains unclear how serious the injuries are or what caused them, but official said they were classifying the area as a ‘level 2’ incident due to the number of calls coming in.

Astroworld experienced a dangerous stampede earlier in the day when the gates to the area were first opened, though the injuries seen later on Friday appeared to be unrelated. 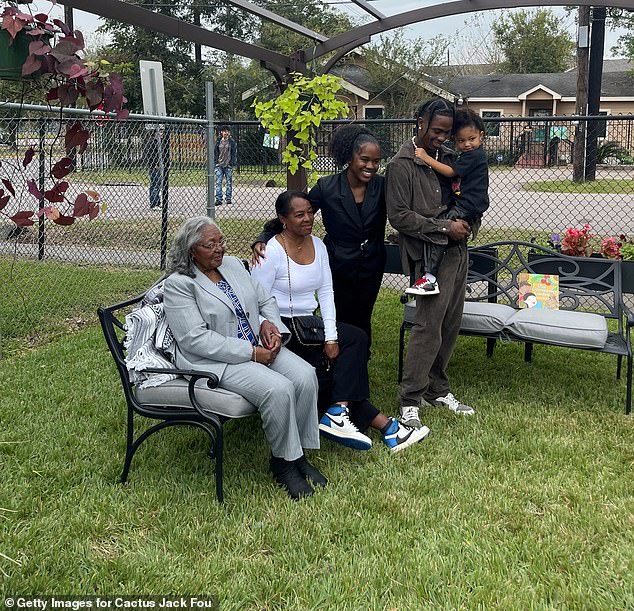 Family: Stormi has been tagging along with her father since she accompanied him and her aunt, grandmother and great-grandmother when Travis dedicated a student garden at Young Elementary School that was partially funded by his Cactus Jack Foundation 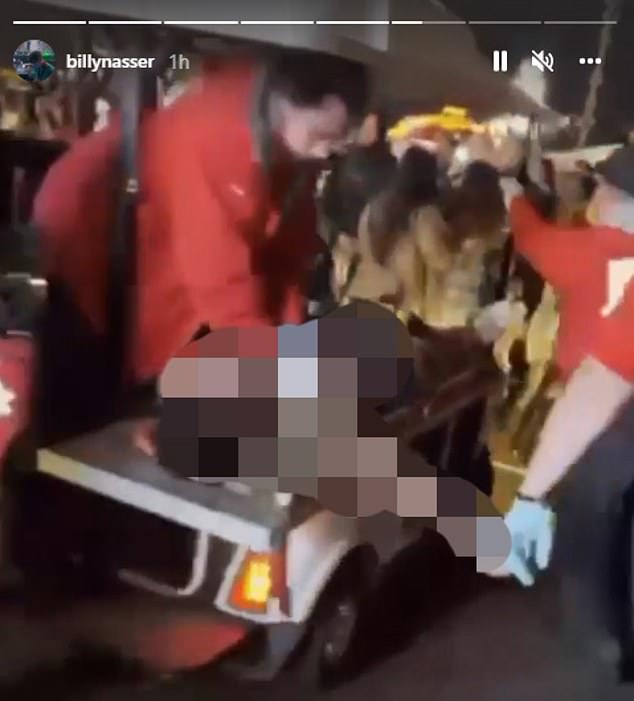 Health emergencies: Several attendees were seen receiving CPR at the festival, and others were seen bleeding profusely. Dozens of ambulances zoomed around the area to attend to injured fans

The destruction didn’t seem to affect Kendall Jenner, who was seen making her rounds earlier in the day to support sister Kylie’s beau Travis.

The 26-year-old model shared VIP snaps from the rapper’s star-studded festival, which featured performances from the likes of SZA and hitmaker Lil Baby.

One day prior Kendall had taken part in the rapper’s Cactus Jack charity softball game, where she was hailed as the ‘MVP’ while flexing her athletic prowess. 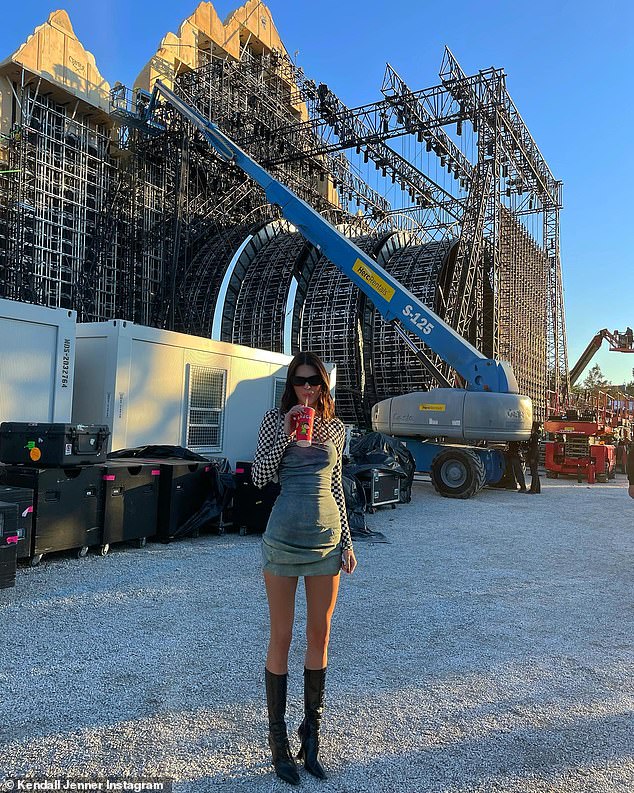 Kendall posted a duo of snaps that showcased her fantastic physique from behind a stage at NRG Park.

Her look for the day included a checkered mesh long sleeve top which she layered underneath a jade mini dress.

The Vogue favorite accentuated her statuesque frame with heeled black boots and kept it cool in sunglasses, while holding a concession stand beverage.

In a second snap she softly smiled while walking into the park and she captioned the series ‘Will you be my mountain?’ 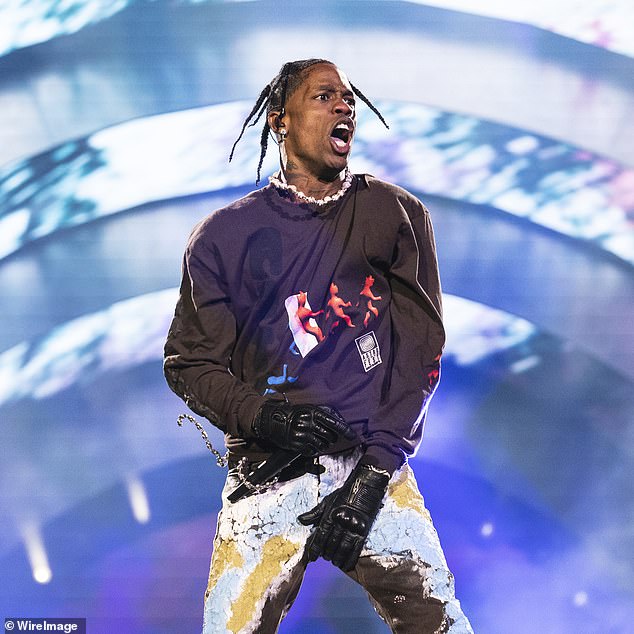 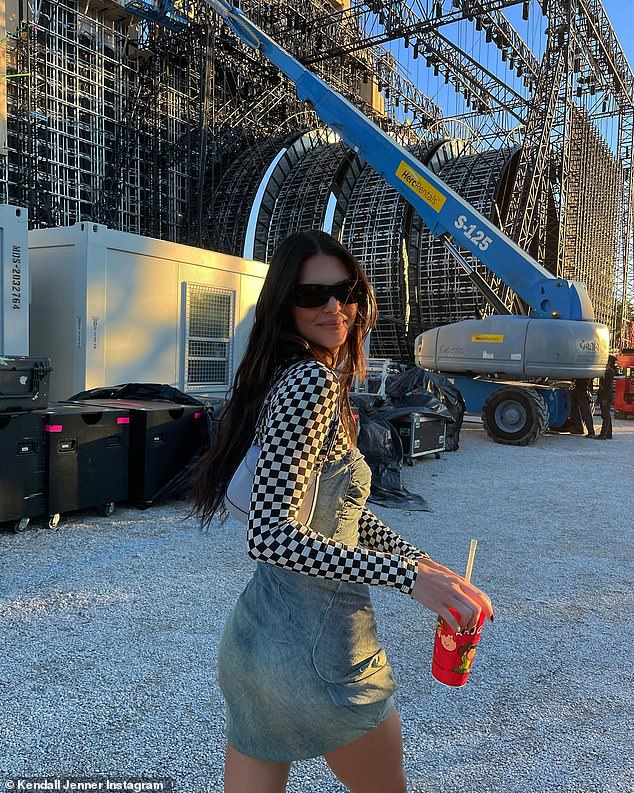 Ready for it: Kendall posted a duo of snaps that showcased her fantastic physique from behind a stage at NRG Park

Her caption seemed to be a reference to Travis’ headlining performance at the event which reads ‘Travis Scott Live at Utopia Mountain.’

Naturally Kylie was present as well and she shared a snap of a personalized starwagon with the name ‘Stormi’ on it.

Scott’s Astroworld Festival is a two day affair that in addition to music includes carnival rides and games.

The lineup for November 5 includes Master P, Toro Y Moi, Lil Baby, and SZA, on the Thrills stage, while Scott will close out the festival on the Chills stage. 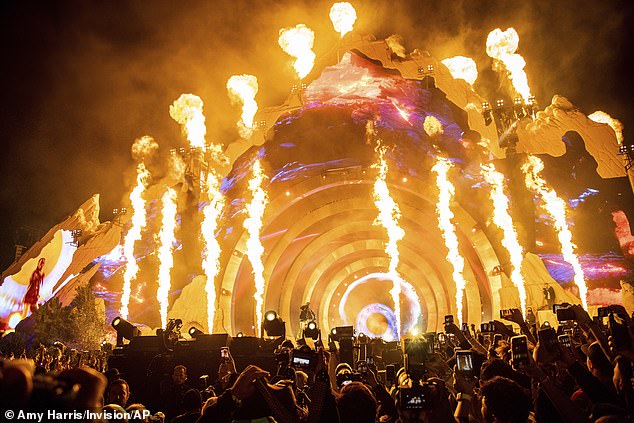 The scene: As the festival is being held amid the ongoing COVID-19 pandemic, a negative COVID-19 test result or proof of full vaccination is required for entry 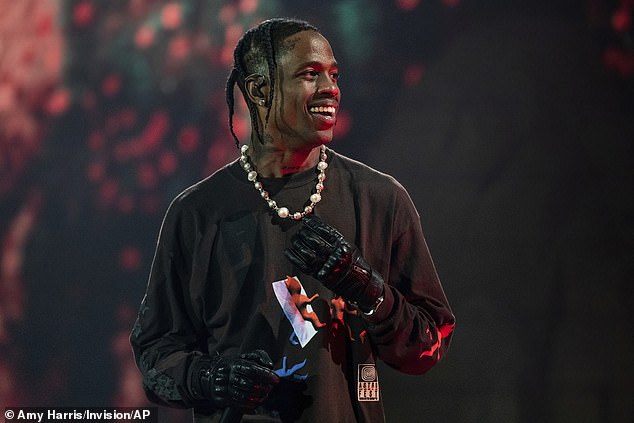 Closer: Travis Scott took to the stage last with a high energy set 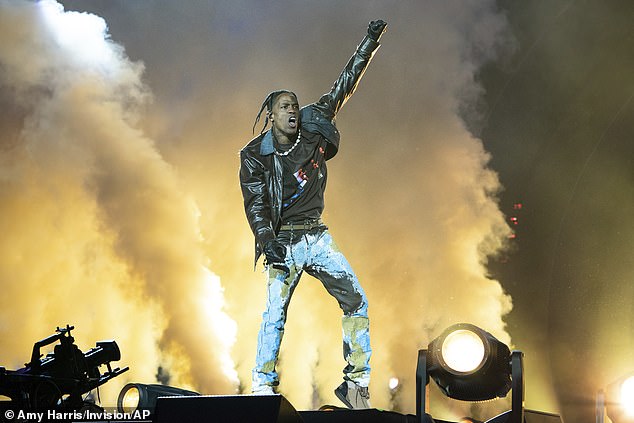 Fatherhood: Travis happens to be the father of Kylie Jenner’s three-year-old daughter Stormi. The couple are currently expecting their second child together

SZA stood out from the pack as she took to the stage in a pair of white fringe chaps that had cut-outs on the upper thighs.

Her flaming red tresses were worn curly as she confidently belted the lyrics to her biggest hits for the roaring crowd. 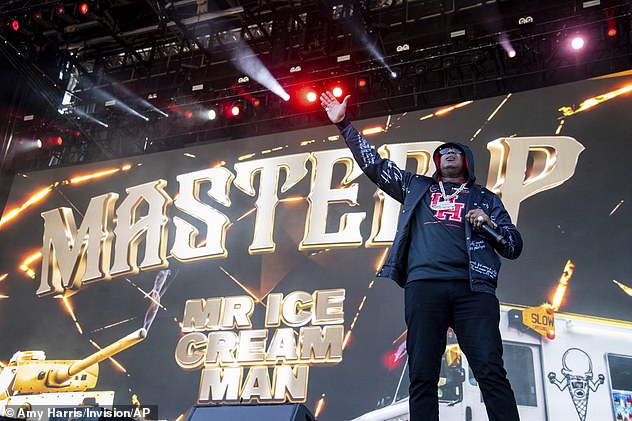 Lineup: Master P was the second act to take the Thrills Stage at Astroworld on day one 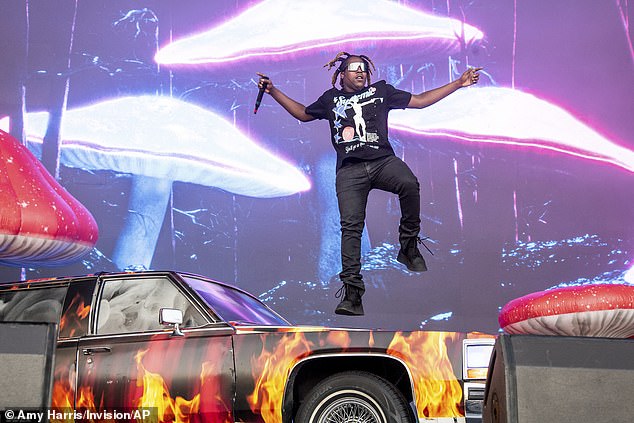 Elaborate: Don Toliver was seen during his set which included an elaborate stage setup with a flame painted car and inflatable mushrooms

An ABC News reporter from Houston’s local affiliate, Mycah Hatfield had reported via Twitter that chaos ensued during day one of the festival as soon as doors opened at 2PM.

‘A stampede burst through the gates. Hundreds of people destroyed the VIP security entrance, bypassing the checkpoint. People were trampled. Some were detained,’ she wrote of the scene at NRG Park.

As the festival is being held amid the ongoing COVID-19 pandemic, a negative COVID-19 test result or proof of full vaccination is required for entry. 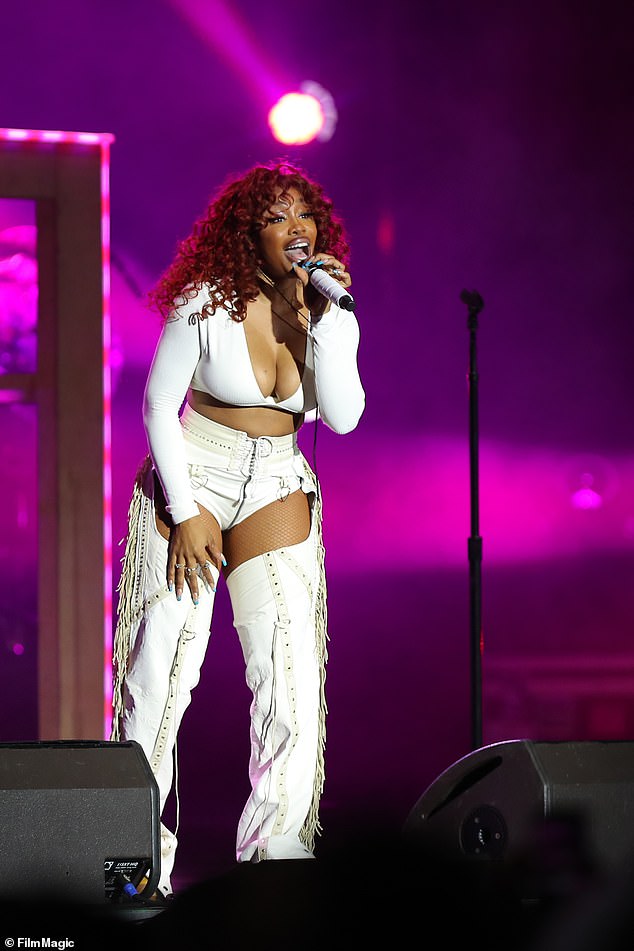 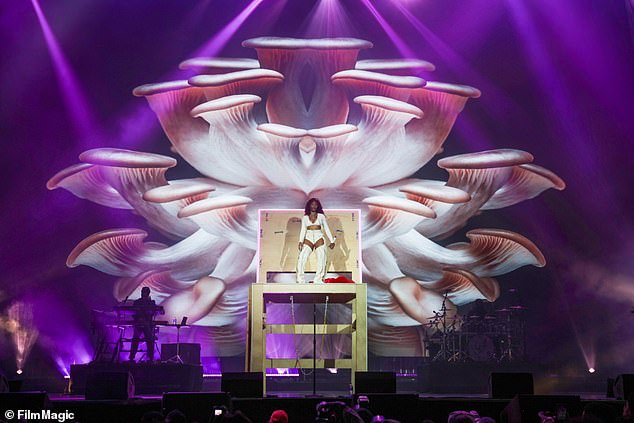 Trippy: Like some of the others performing her stage set included trippy mushroom-like visuals 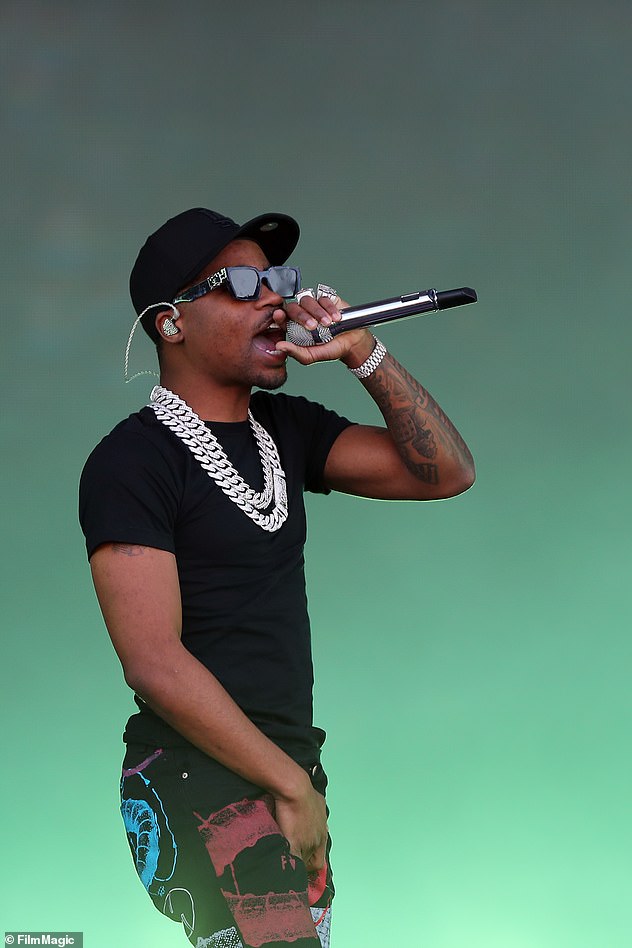 Another act: Roddy Ricch was seen performing to a crowd 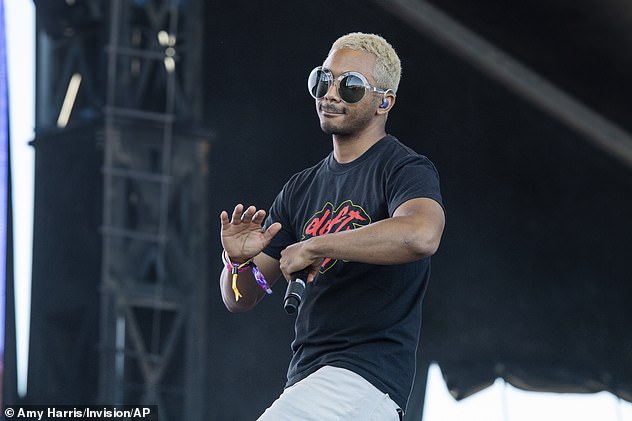 Bringing the noise: Toro Y Moi was another performer at the sold out festival 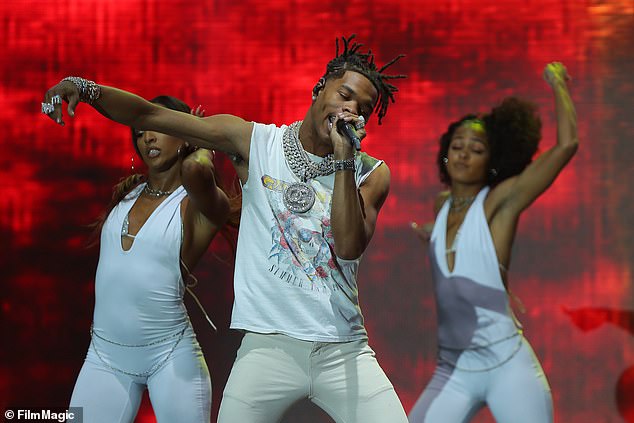 Energized: Lil Baby was seen rapping in all white with two backup dancers behind him