The 24-year-old makeup mogul had on a shiny silver one-piece plunging bathing suit as she reclined on a boat.

The mother-of-two said she was on a ‘lake’ which appeared to be Lake Powell, an artificial reservoir on the Colorado River in Utah and Arizona.

At one point the star was seen tubing with several of her pals and she was also photographed swimming. 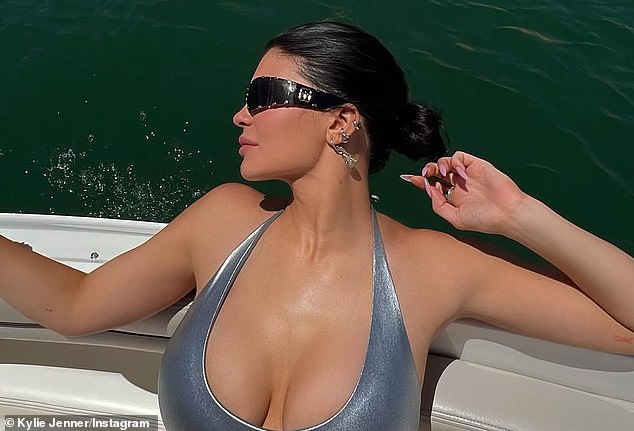 The look: The 24-year-old makeup mogul had on a shiny silver one-piece plunging bathing suit as she reclined on a boat

The Calabasas, California native kept it simple with her raven hair pulled back and black sunglasses on with a few silver rings on.

Sister Kim Kardashian hit the like button as her pal Harry Hudson posted an alien and spaceship emoji.

The star has not been posing much in swimwear since she welcomed her second child, a son, on February 2.

And she has not been seen in her Kylie Swim collection, which is still thriving with high sales despite mixed reviews. 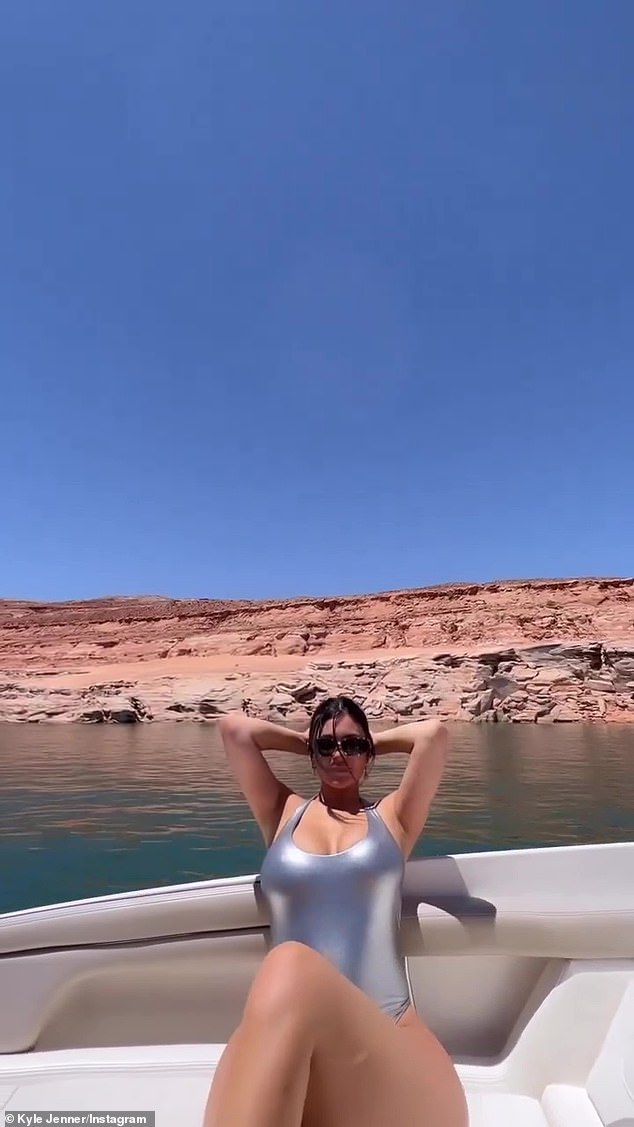 Sitting pretty in the sun: The reality TV icon was also seen on her Insta Stories 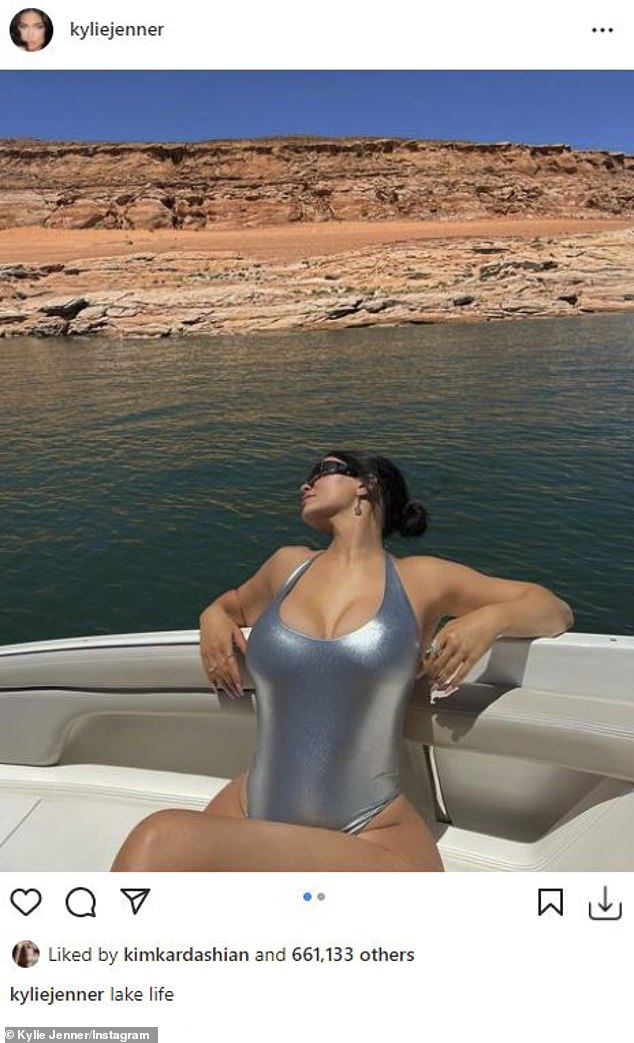 The lake life feels good: The star does not take vacations too often as she looks over Kylie Cosmetics, Kylie Skin and Kylie Swim

Kylie was last seen in a netted pink leotard with stockings and thigh-high shiny red boots that highlighted her incredible figure.

Her outfit was complicated.

Jenner wore a pink netted leotard with long sleeves that had gloves. The piece was worn over her pink netted stockings. Together it looked like they made up a catsuit.

The red pleather boots went up to her thighs and had a jagged tooth heel with pointy toes.

The Life Of Kylie star wore her black hair slicked back in a high ponytail as she had on plenty of Kylie Cosmetics makeup for the shoot.

Jenner held onto a pair of sunglasses with a pink frame.

In her caption, the siren said it was just another day at the office. And she meant that literally as she has photo studios inside her Hidden Hills, California offices. 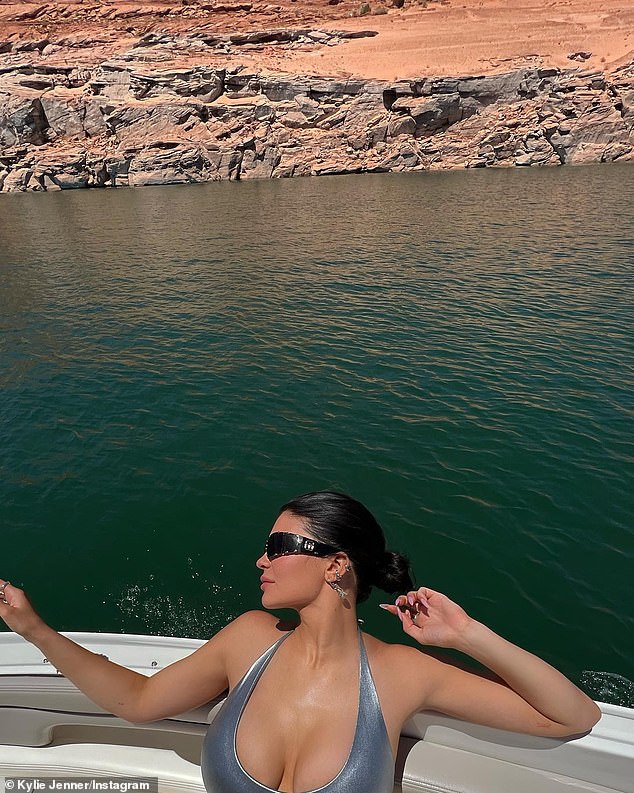 Lake life: The mother-of-two said she was on a ‘lake’ which appeared to be Lake Powell, an artificial reservoir on the Colorado River in Utah and Arizona, United States 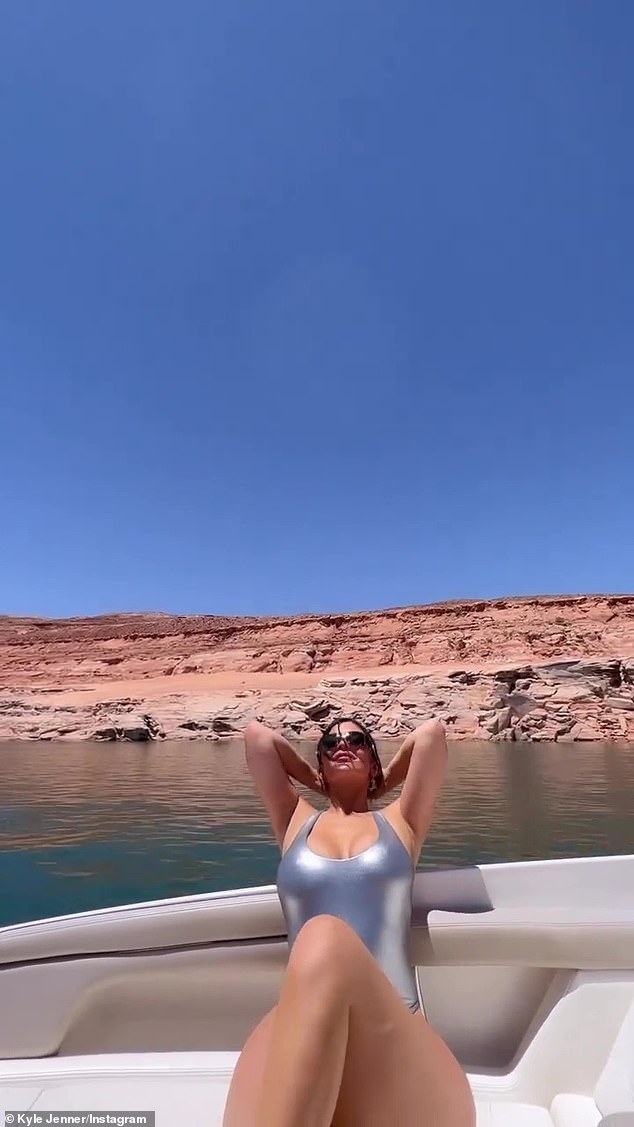 All chill, no ill: With her hands on her hair, she looked up to the sun with one leg up

Meanwhile, the mogul shared on her Insta Stories that she hit a local 7/11 store to pick up Flaming Hot Fritos.

The looker was in a silver outfit with chunky silver rings and white sneakers as she drove there in one of her many luxury cars, this time a Maybach.

Kylie said her friend Yris Palmer turned her on to the tasty, spicy chips. 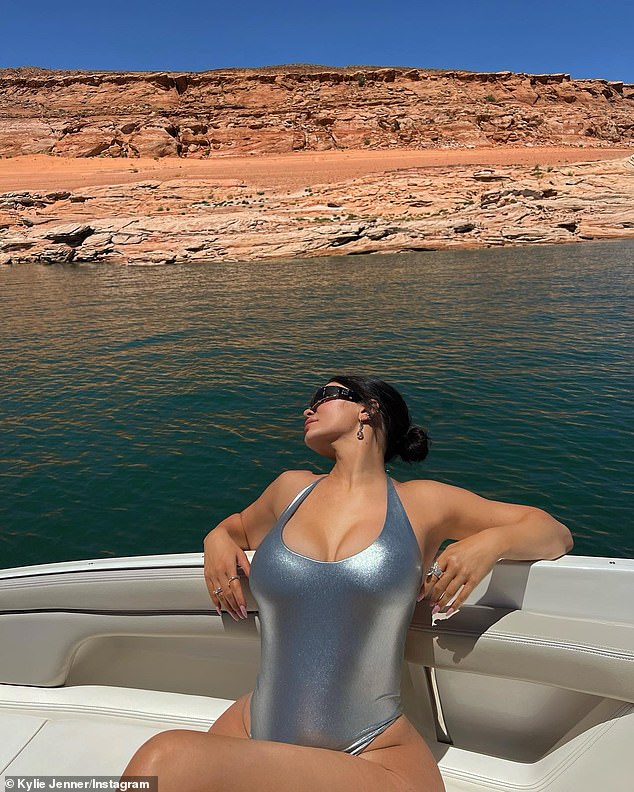 Kim liked: Sister Kim Kardashian hit the like button as her pal Harry Hudson posted an alien and spaceship emoji. 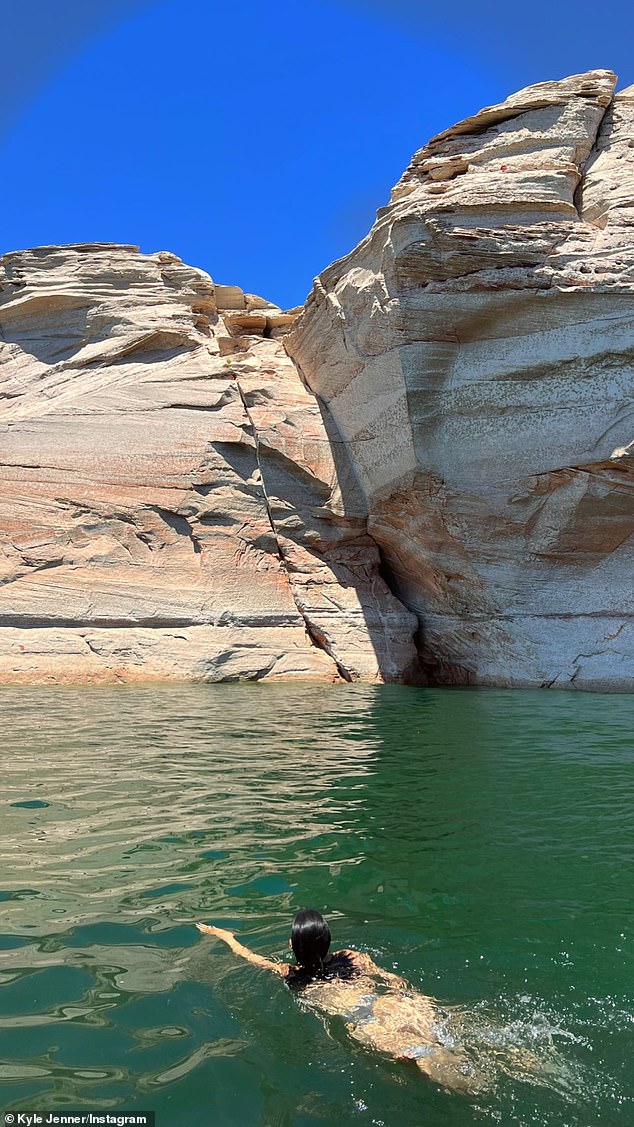 Going for a swim: Here the siren showed off her thong briefs as she went for a dip

These posts come after Jenner supported Scott as he made his comeback performance at the Billboard Music Awards in mid May.

The reality TV star hit the red carpet at the MGM Grand Garden Arena in Las Vegas with her partner and their daughter Stormi, four, as he prepared to hit the stage for his first TV gig since 10 people were killed at his Astroworld music festival in Texas last year.

Travis, 34, and Kylie snuggled up together in front of the cameras and posed for pictures with their little girl. 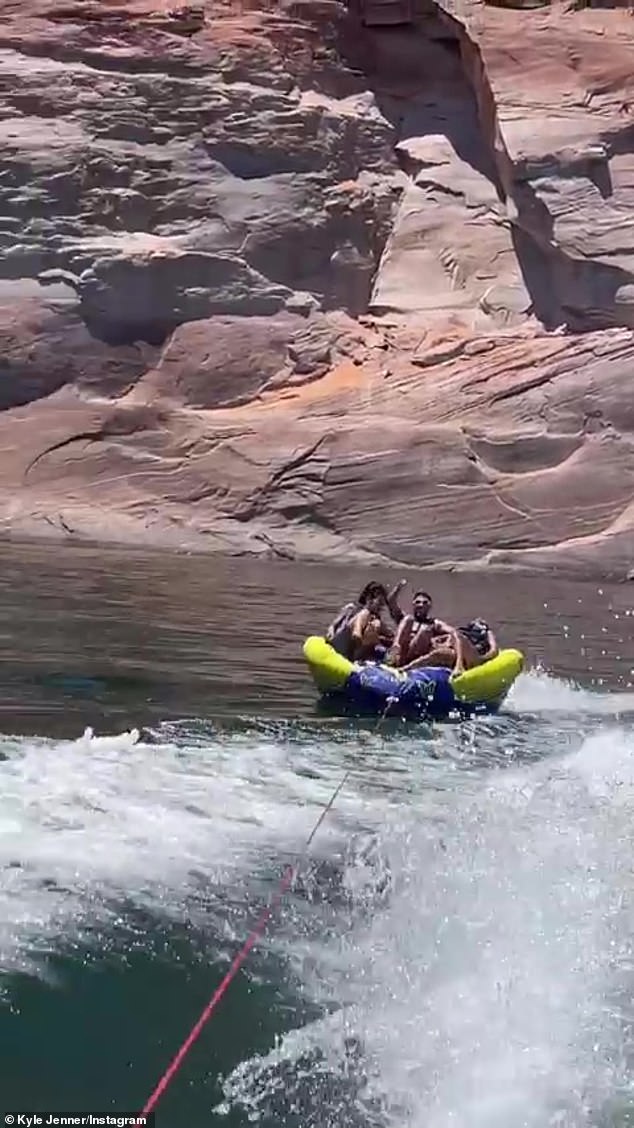 A little fun ride with her pals: And she was seen tubing at a high speed with her friends 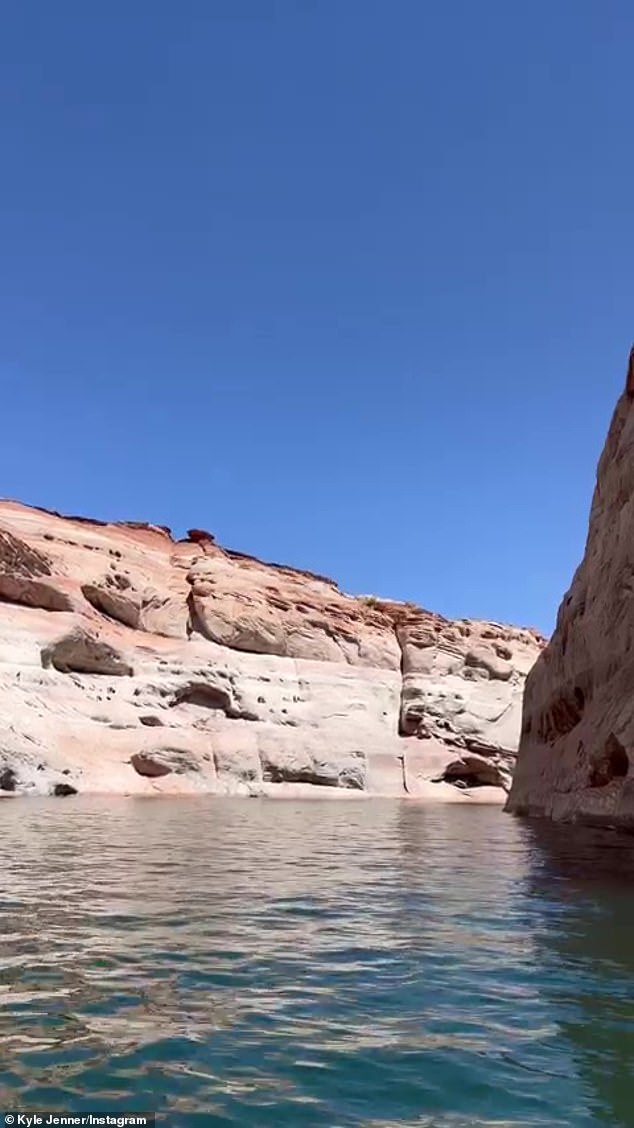 A gorgeous setting: The lake surrounded by high red sand cliffs that can be seen in Lake Powell

The rapper later took to the stage to perform his hits ‘Mafia’ and ‘Lost Forever’.

It marked his first live TV performance since the tragedy at Astroworld as he slowly returns to public life.

Eight crowd members died in a terrifying crush during the first night of his event at the NRG Park in Houston in November 2021.

Two more revelers died from their injuries in hospital in the days after the event, while 300 gig-goers were left injured.

Travis performed his first public gig since the disaster at a club in Miami, Florida earlier this month. 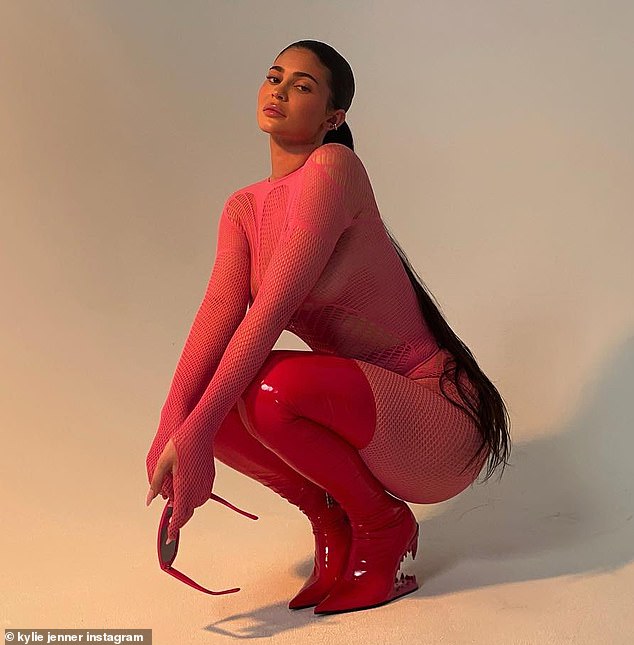 Kylie in coral: Jenner shared a wealth of images to social media on Tuesday morning where she was posing for the camera in a white studio

He previously performed a short guest appearance at a Coachella afterparty on April 17.

He also played at at a private pre-Oscars party in Bel-Air on March 26.

Later this year, Travis will headline the Primavera Festival in South America, which visits countries including Brazil, Chile and Argentina.

He is set to play three shows in November alongside singer Lorde. Other acts on the bill for the festival include Arctic Monkeys and Bjork.

According to TMZ, Travis plans to book in more shows over the summer.

It is not known if he attended the wedding in Italy of Kylie’s sister Kourtney Kardashian.

Two weeks ago Kourtney said ‘I do’ to drummer Travis Barker. 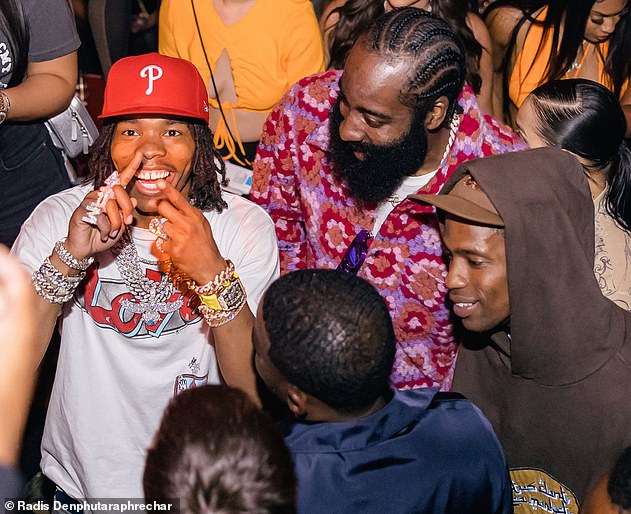