Kylian Mbappe has made the bold claim of describing his Paris Saint-Germain team-mate Achraf Hakimi as the best right back in the world after his magical goal for Morocco on Tuesday night.

With their Africa Cup of Nations last-16 tie with Malawi locked at 1-1 with 20 minutes to go, Hakimi stepped up and scored a sublime winner.

The former Inter Milan, Real Madrid and Borussia Dortmund star curled in an outrageous free-kick from 25 yards out, prompting wild celebrations among his Morocco team-mates. 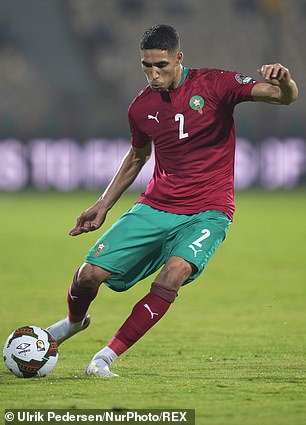 But Hakimi earned extremely high praise from one of his club colleagues on Twitter, with Mbappe effusive in his praise for the 23-year-old.

Hakimi is certainly in the conversation for that title after a stunning few seasons that included him winning the Serie A title at Inter Milan last year.

He has also chalked up double figures for assists in his last two full campaigns with Inter and Dortmund.

Hakimi joined PSG last summer for a fee of £60million, amid interest from Chelsea and a host of other top clubs.

But Liverpool’s Trent Alexander-Arnold and Joao Cancelo of Manchester City will surely have something to say about their place in the right back rankings. 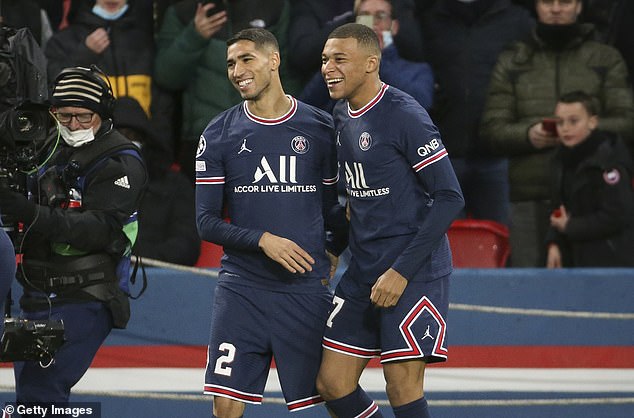 Hakimi joined PSG last summer for £60m, amid interest from Chelsea and other top clubs

Morocco desperately needed Hakimi’s goal they came from behind to beat Malawi 2-1 and stay on course for their first African title in over 45 years.

His outrageous strike completed the turnaround at the Ahmadou Ahidjou Stadium after Youssef En-Nesyri had equalised on the stroke of halftime.

Malawi went ahead early after a stunner of their own from Frank Mhango, who hit a speculative left-footed effort from distance and watched as the swerving ball caught out Morocco goalkeeper Yassine Bounou and crashed into the top of the net.

Morocco will meet either Ivory Coast or Egypt in their quarter-final in Yaounde.