Kyle Sandilands and Jackie 0 have lashed out at the group of Manly NRL players refusing to wear a rainbow striped jersey on the field for ‘religious’ reasons, accusing them of hypocrisy.

Seven Manly Sea Eagles stars vowed to step down from Thursday’s must-win match against the Sydney Roosters because of the new gay pride jersey.

The Sea Eagles unveiled the jumper – called Everyone in League – on Monday to promote inclusivity of LGBT+ people in the NRL.

But star players Josh Aloiai, Jason Saab, Christian Tuipulotu, Josh Schuster, Haumole Olakau’atu, Tolutau Koula and Toafofoa Sipley refused to run out wearing the ‘inclusive’ jersey. saying that wearing it would be against their religious beliefs.

Their decision has sparked an outpouring of public outrage, including from their own fans and club legends, while others have supported their freedom of religious beliefs.

It has since emerged three players have changed their mind and will play this week following an emergency meeting.

‘Of the seven players who are refusing to wear the jersey, at least three now have had a bit of a change of heart and are considering wearing the pride jersey for this upcoming round,’ reporter Michelle Bishop told Channel 7’s Sunrise on Tuesday morning.

Manly players Sean Keppie (left), Kieran Foran (middle) and Reuben Garrick posed with the club’s Everyone in League jersey, which was unveiled on Monday

The radio stars said they were at a loss trying to understand why some players refused to support the LGBT+ community when gambling company Pointsbet is the main club sponsor and their Brookvale Oval home ground is currently called 4 Pines Park after a beer company.

‘The whole excuse of religion doesn’t make sense. If they’re all playing in a stadium sponsored by alcohol and all the jerseys are sponsored by a gambling company, it makes no sense,’ Sandilands said.

‘But they’re okay to talk about gambling and encourage that,’ Jackie O added.

Sandilands said everyone should ‘take a moment to think about [the seven players’ feelings]’, suggesting people that furiously oppose homosexuality are often insecure about their sexuality themselves.

Jackie O said the players boycotting the jerseys were ‘mean’. 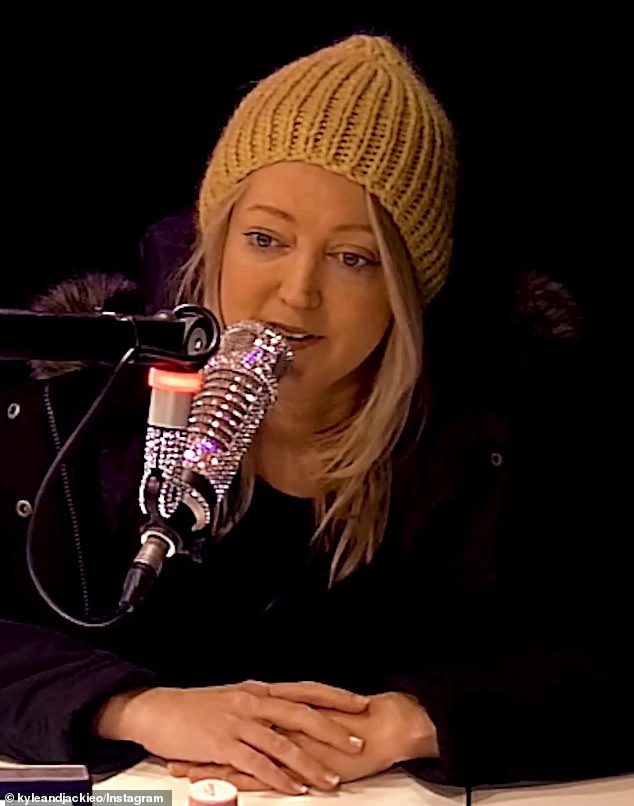 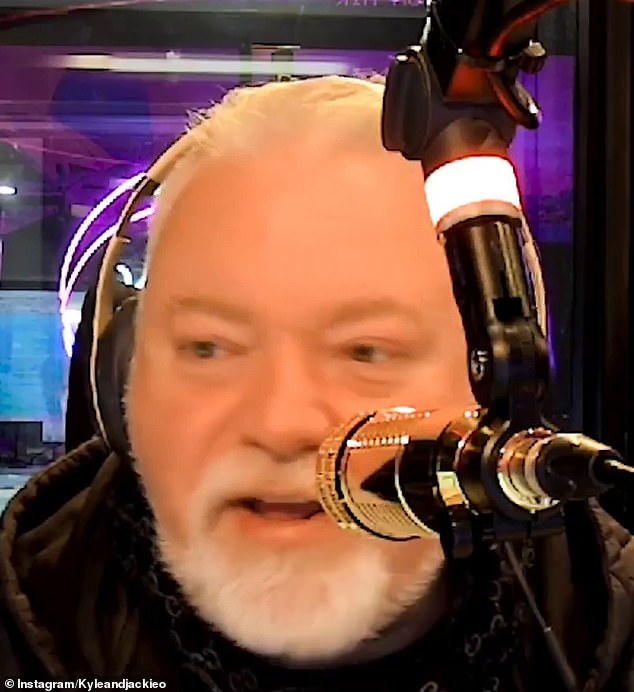 Sandilands said the players should ‘do as they’re told’ because they had signed a contract.

‘I don’t like people being forced to do anything they don’t like to do but when you’re playing for a team, you’ve got no decision as to who sponsors the team,’ he said.

‘But you sign a contract and you do as you’re told or go off and work somewhere else.’

Kyle and Jackie O’s newsreader Brooklyn Ross, who is gay, described the decision as crazy.

He called for boycotting players to be booted out of the NRL but understood concerns about the gay marriage.

‘This is just saying these people exist and we support you guys. But they won’t even do that,’ Ross said.

‘I’m not here to put hate on them. We do an Indigenous round. What if a group of white guys said “nah, I’m not playing this weekend”.’

‘I want those players kicked out of the game. We shouldn’t accept this.’

Prime Minister Anthony Albanese called for the saga to be resolved.

‘I hope this is resolved. It’s a good thing that sport is more inclusive. It is important that in Australian society we respect everyone for who they are,’ he told reporters on Tuesday.

He respected the players’ decision, despite expressing his disappointment.

‘The game prides itself on treating everyone as a human being, no matter what their race, colour or sexual orientation,’ V’Landys told 2GB’s Ben Fordham on Tuesday.

‘We’re all human beings at the end of the day.’

‘Rugby league is the greatest game for all. It’s inclusive. But at the same time you have to respect people’s religious beliefs and cultural beliefs.

‘Those players are taking a stand and they’ve got every right to – they’ve got freedoms to do so. We live in a free country.’

‘But as far as the game is concerned, we pride ourselves on being inclusive and welcoming everybody, no matter their race, colour or sexual orientation.’ 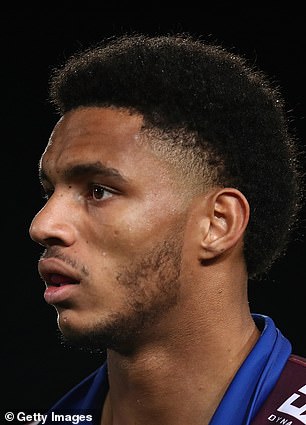 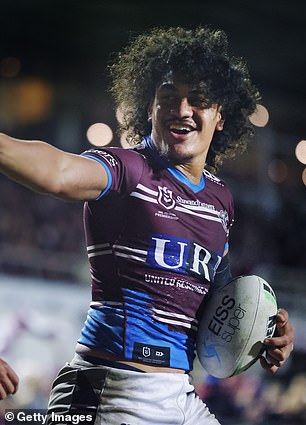 Mr V’landys denied suggestions the boycotting players are being excluded for not being inclusive.

‘If you don’t want to be inclusive and you don’t want recognise we’re all human beings and we’re all the same, you’ve got the right to stand down. But the game will always be there for everyone.’

He conceded the Sea Eagles should have consulted the team more collaboratively but said players have a choice.

‘I don’t think this is a political issue,’ Mr V’landys said.

”I’m the first person who doesn’t want sport to be politicised because we go to sport to escape the day to day problems so we don’t want politics involved.

‘Recognising and respecting fellow human beings and being inclusive I do not believe is political. But at the same time, I respect people have personal freedoms and they’ve got a choice.’ 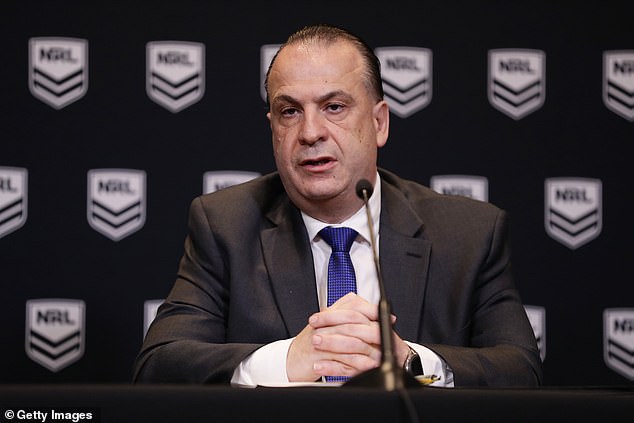 Thursday night’s clash is a must-win for the ninth-placed Sea Eagles to keep their finals hopes alive.

The eighth-placed Roosters are on the same points as them but are ahead on points difference.

‘It’s just disappointing we’re here. We don’t want those players to be outcasts, but as a club we celebrate and support everyone. We have only done this from a good-hearted point of view.’

By Levi Parsons and Dan Cancian for Daily Mail Australia

Three Manly players have reportedly backflipped on their decision to boycott Thursday’s crunch match against the Sydney Roosters because of the club’s rainbow-striped gay pride jersey.

The Sea Eagles unveiled the jumper – called Everyone in League – on Monday to promote inclusivity of LGBT+ people in the NRL.

The players had an emergency meeting with club officials to try to reach a compromise, but outright refused to wear the strip, meaning the club could be forced to promote seven reserve-grade players to make up numbers.

But on Tuesday morning 7News reported three of the seven players were considering a change of heart.

‘Of the seven players who are refusing to wear the jersey, at least three now have had a bit of a change of heart and are considering wearing the pride jersey for this upcoming round,’ reporter Michelle Bishop told Sunrise.

Club legend Ian Roberts, who in 1995 was the first-ever rugby league player to come out as gay, said the embarrassing situation will be felt most by the area’s LGBTQI+ community.

‘I try to see it from all perspectives but this breaks my heart,’ Roberts told the Daily Telegraph.

‘It’s sad and uncomfortable. As an older gay man, this isn’t unfamiliar. I did wonder whether there would be any religious push back. That’s why I think the NRL have never had a Pride round.

‘I can promise you every young kid on the northern beaches who is dealing with their sexuality would have heard about this.’ 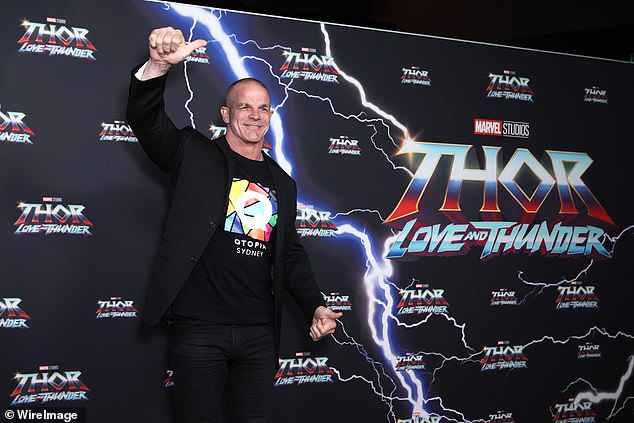 Club legend Ian Roberts, who in 1995 was the first-ever rugby league player to come out as gay, said the embarrassing situation will be felt most by the area’s LGBTQI+ community 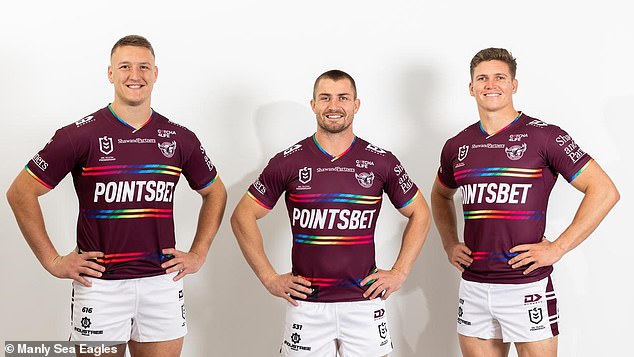 Manly players Sean Keppie (left), Kieran Foran (middle) and Reuben Garrick posed with the club’s Everyone in League jersey, which was unveiled on Monday

Manly were preparing to hold an emergency meeting on Tuesday in an attempt to try and resolve the ugly rift, which has left them in a precarious position ahead of the Round 20 clash at Brookvale Oval, also known as 4 Pines Park.

But with a media storm brewing players and officials brought the meeting forward to Monday night.

The 90-minute sit down ended with coach Des Hasler telling the players he understood they were put in a difficult position and that he supported their decision not to play.

The jumper at the centre of the dispute features rainbow colours replacing the traditional white piping on the maroon background, making Manly the first NRL club to wear a pride jersey in rugby league’s 134-year history.

It was understood Monday night’s meeting floated the idea of the players who objected to the new design be allowed to wear the standard jersey instead, but NRL regulations stipulate all players must be wearing the same playing strip. 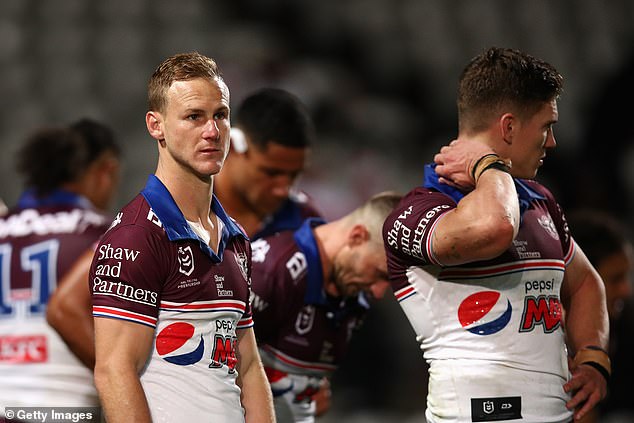 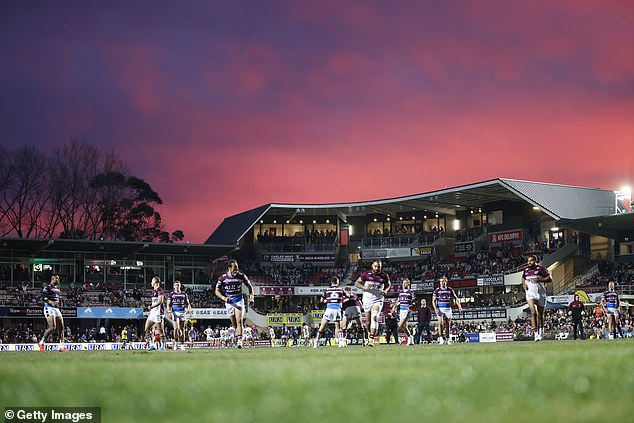 Manly are in a precarious position ahead of the Round 20 clash at Brookvale Oval, also known as 4 Pines Park (pictured)

‘LGBTIQA people have always been a part of sport but haven’t always been allowed the visibility,’ Roberts said.

‘I have been trying to get the NRL to have a pride round for the past three years and it still hasn’t got the traction it deserves. It saddens me because they think having a float at the Mardi Gras is enough and it’s not.’

At this stage the club has no intention of scrapping the jersey – even as the Sea Eagles are fighting it out for a place in the finals.

Manly’s interim chief executive Gary Wolman said the club was proud of the initiative and of the message it sent to the community.

‘The Sea Eagles have such a rich and diverse history in rugby league and in the community,’ he said at the unveiling of the jersey.

‘To be able to bring this concept to life with Dynasty sport is a fantastic achievement and we are pleased to be able to share such an important message that means so much to many people in the community.’ 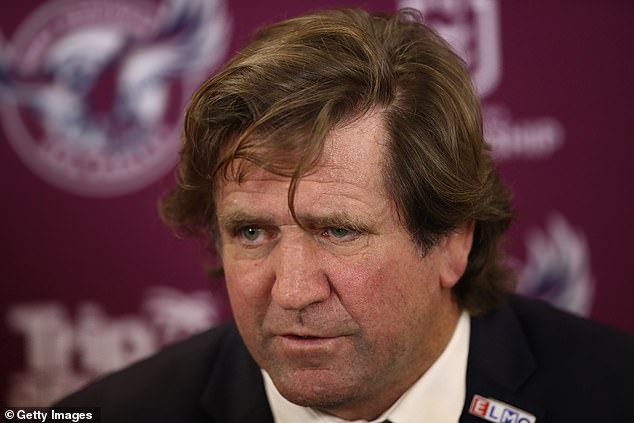 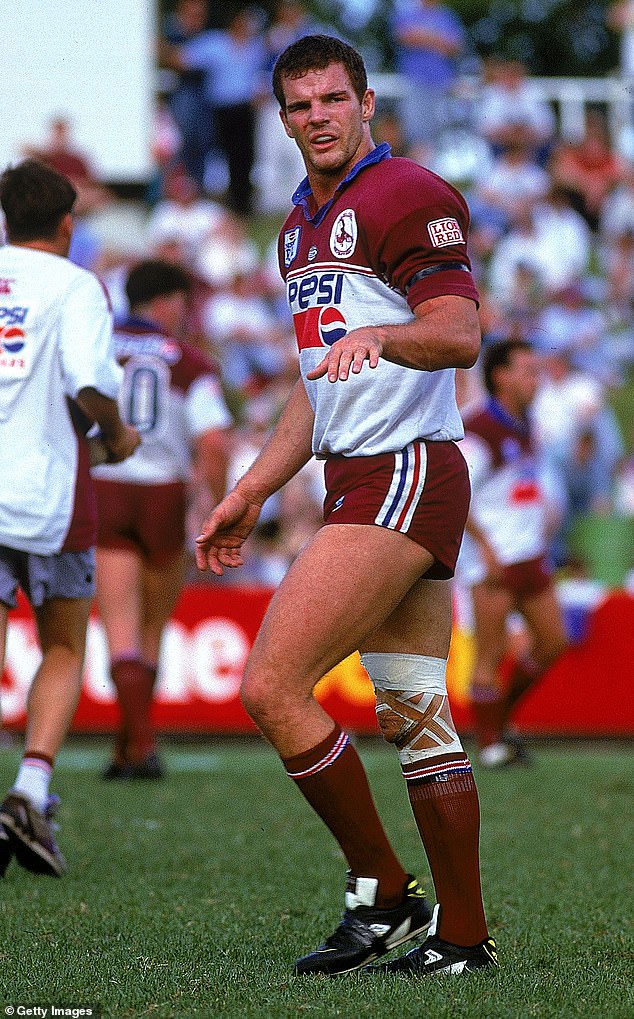 Ian Roberts, pictured in 1995 playing for the Manly Sea Eagles, was regarded as one of the toughest forwards of his era

The feel-good factor following the announcement, however, has long dissipated with reports circulating there was little consultation with the players.

The Sea Eagles wore a retro kit for their loss against St George Illawarra on Friday, but it is understood the NRL will not allow players who oppose the rainbow jersey to wear an alternative jumper.

Thursday night’s clash could be pivotal for both teams’ finals hopes, with the ninth-placed Sea Eagles trailing the eighth-placed Roosters just on point differential. 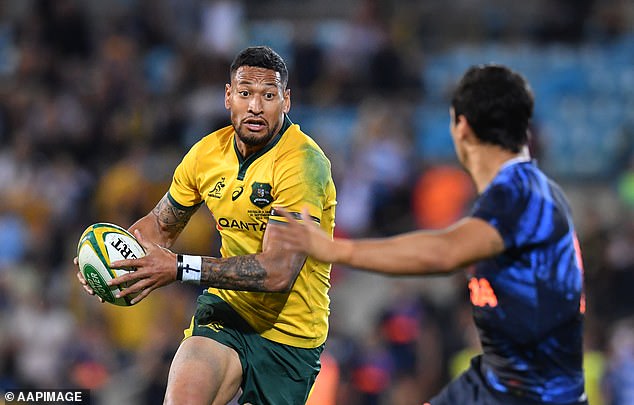 Manly must name a 22-man squad for the game by Tuesday afternoon.

Former Wallabies star Israel Folau famously had his Australia contract torn up in 2019 after he posted a meme on social media which said ‘hell’ awaits homosexuals and other groups he considered as ‘sinners’.

An evangelical Christian, Folau returned to rugby league in France in 2020 and tried to revive his career in the sport in Australia but was blocked by local officials.

The 33-year-old returned to Test rugby last month, when Tonga took on Fiji in the Pacific Nations Cup.