Russia is ready to set up a dialog with the new Biden administration in which differences are expected to be aired, a Kremlin spokesman said on Sunday, adding that President Vladimir Putin would respond in kind to the U.S.’s willingness to talk.

Relations between Moscow and Washington have been at their lowest since the end of the Cold War, with the two sides at odds over Russia’s role in Ukraine and allegations of its meddling in U.S. elections, which it denies, among other issues.

The United States on Saturday also called on Russian authorities to release protesters and journalists detained at demonstrations supporting detained Kremlin critic Alexei Navalny, and condemned what it called ‘harsh tactics’ used against them.

‘Of course, we count on success in setting up a dialog,’ Kremlin spokesman Dmitry Peskov was quoted as saying on TV by Interfax news agency.

‘This will be the dialog where, of course, differences will have to be stated to a greater extent, points of differences. But at the same time, a dialog is a possibility to find some rational kernels, the little parts where our relations are getting closer,’ he said.

‘And if the current U.S. administration is ready for such an approach, I have no doubts that our president will respond in kind.’ 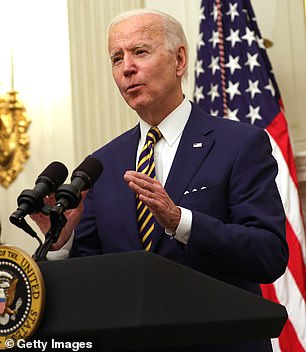 Russia is ready to set up a dialog with the new Biden administration in which differences are expected to be aired, a Kremlin spokesman said on Sunday, adding that President Vladimir Putin would respond in kind to U.S. willingness to talk

Putin was one of the last global leaders to congratulate Joe Biden on his victory in the U.S. presidential election after the November 3 vote.

One of the burning issues to be resolved by the two nuclear powers is the arms control treaty, known as New START, which is due to expire on February 5.

The White House said last week that Biden would seek a five-year extension to the deal.

On that matter, Peskov, said that Russia stands for extending the pact and is waiting to see the details of the U.S. proposal.

‘We can only welcome political will to extend the document,’ Peskov said in a conference call with reporters. ‘But all will depend on the details of the proposal.’

The treaty, signed in 2010 by President Barack Obama and Russian President Dmitry Medvedev, limits each country to no more than 1,550 deployed nuclear warheads and 700 deployed missiles and bombers, and envisages sweeping on-site inspections to verify compliance.

Russia has long proposed to prolong the pact without any conditions or changes, but former President Donald Trump´s administration waited until last year to start talks and made the extension contingent on a set of demands. The talks stalled, and months of bargaining have failed to narrow differences.

‘Certain conditions for the extension have been put forward, and some of them have been absolutely unacceptable for us, so let’s see first what the U.S. is offering,’ Peskov said.

Mikhail Ulyanov, the Russian ambassador at the international organizations in Vienna, also hailed Biden’s proposal as an ‘encouraging step.’

‘The extension will give the two sides more time to consider possible additional measures aimed at strengthening strategic stability and global security,’ he tweeted. 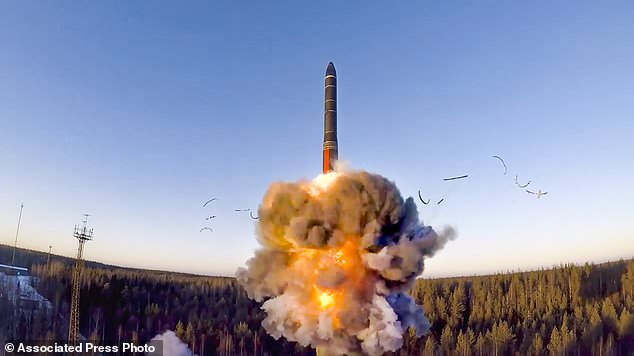 One of the burning issues to be resolved by the two nuclear powers is the arms control treaty, known as New START, which is due to expire on February 5

The Russian Foreign Ministry’s spokeswoman, Maria Zakharova, noted in a statement that Russia always has called for maintaining the treaty and said Russian diplomats are ready to quickly engage in contacts with the U.S. to formalize its extension for five years ‘without any delay.’

U.N. Secretary-General Antonio Guterres welcomed the U.S. decision and Russia’s reiteration. He encouraged both countries ‘to work quickly to complete the necessary procedure for the New START’s extension before the February 5 expiration and move as soon as possible to negotiations on new arms control measures,’ U.N. spokesman Stephane Dujarric said.

‘A five-year extension would not only maintain verifiable caps on the world’s two largest nuclear arsenals but will also provide time to negotiate new nuclear arms control agreements to grapple with our increasingly complex international environment,’ Dujarric said.

Biden indicated during the campaign that he favored the preservation of the New START treaty, which was negotiated during his tenure as U.S. vice president.

The talks on the treaty´s extension also were clouded by tensions between Russia and the United States, which have been fueled by the Ukrainian crisis, Moscow´s meddling in the 2016 U.S. presidential election and other irritants.

Despite the extension proposal, White House press secretary Jen Psaki said Biden remains committed to holding Russia ‘to account for its reckless and adversarial actions,’ such as its alleged involvement in the Solar Winds hacking event, 2020 election interference, the chemical poisoning of opposition figure Alexei Navalny and the widely reported allegations that Russia may have offered bounties to the Taliban to kill American soldiers in Afghanistan.

Asked to comment on Psaki´s statement, Peskov has reaffirmed Russia´s denial of involvement in any such activities.

After both Moscow and Washington withdrew from the 1987 Intermediate-Range Nuclear Forces Treaty in 2019, New START is the only remaining nuclear arms control deal between the two countries.

Arms control advocates have strongly called for New START’s preservation, warning that its lapse would remove any checks on U.S. and Russian nuclear forces. 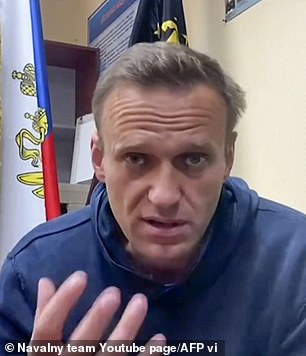 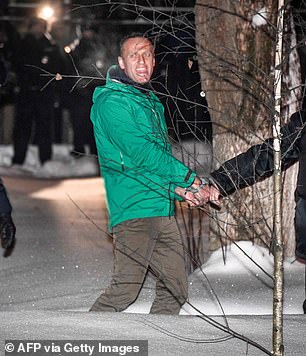 The United States on Saturday also called on Russian authorities to release protesters and journalists detained at demonstrations supporting detained Kremlin critic Alexei Navalny (above), and condemned what it called ‘harsh tactics’ used against them 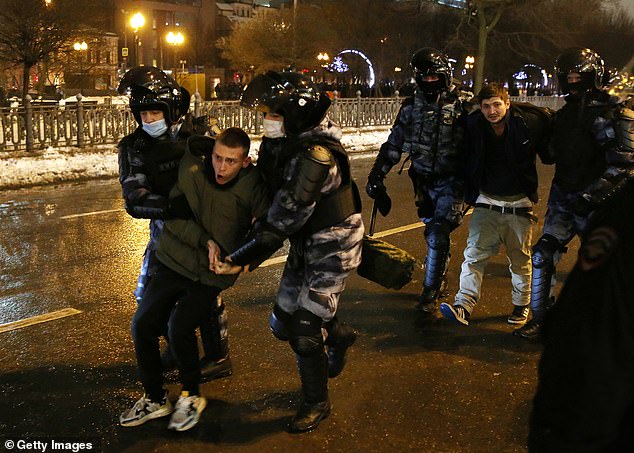 Last week, Russia also declared that it would follow the U.S. to pull out of the Open Skies Treaty allowing surveillance flights over military facilities to help build trust and transparency between Russia and the West.

While Russia always offered to extend New START for five years – a possibility envisaged by the pact – Trump asserted that it put the U.S. at a disadvantage and initially insisted that China be added to the treaty, an idea that Beijing flatly rejected. Trump’s administration then proposed to extend New START for just one year and also sought to expand it to include limits on battlefield nuclear weapons.

Moscow has said it remains open for new nuclear arms talks with the U.S. to negotiate future limits on prospective weapons, but emphasized that preserving New START is essential for global stability.

Russian diplomats have said that Russia´s prospective Sarmat heavy intercontinental ballistic missile and the Avangard hypersonic glide vehicle could be counted along with other Russian nuclear weapons under the treaty.

The Sarmat is still under development, while the first missile unit armed with the Avangard became operational in December 2019.

The Russian military has said the Avangard is capable of flying 27 times faster than the speed of sound and could make sharp maneuvers on its way to a target to bypass missile defense systems. It has been fitted to the existing Soviet-built intercontinental ballistic missiles instead of older type warheads, and in the future could be fitted to the more powerful Sarmat.