Two photographers say a herd of 11 brumbies they documented for many years have been brutally slaughtered in a national park as they claim culling of the wild horses is based on ‘lies and propaganda’.

On Sunday Cooma couple Michelle and Ian Brown made the gruesome discovery that the entire herd of 11 were dead and left to rot at Kosciuszko National Park.

They were found with bullet holes in their heads and bodies. At least three of the mares were pregnant at the time of death.

It’s believed the horses were shot as part of ‘wild horse control’ measures to protect the park’s fragile ecology, implemented by the National Parks and Wildlife Service (NPWS).

The presence of the wild horses in the national park has been an ongoing source of tension between brumby lovers and ecologists for years.

But Ms Brown told Daily Mail Australia that a brumby recount must take place as she claimed the estimated total numbers of wild horses in the park are false.

‘We want a proper brumby population recount to take place. The whole trapping and removal of our brumbies and wild horse management plan is based on a flawed population count,’ she said. 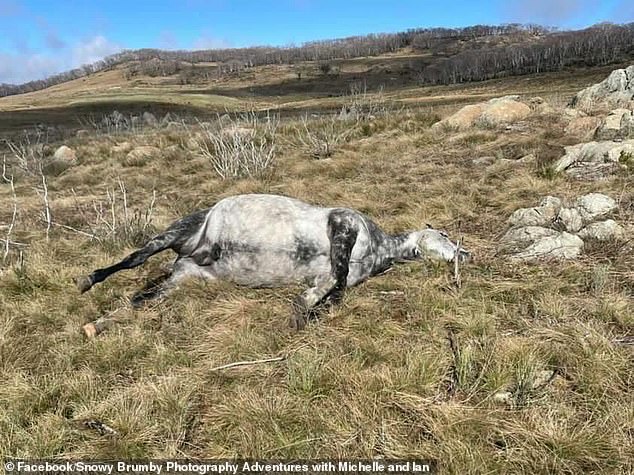 Two photographers say a herd of brumbies they documented for many years have been brutally slaughtered, claiming culling measures are based off ‘lies and propaganda’

‘National Parks and Wildlife Service and those involved with the removal of the brumbies state that there are 14,000 horses up there when in fact there are less than 1,500 now, maybe even less.

‘I have been hiking the area for years and years, I honestly don’t think that there are more than 1,500 brumbies up there. It’s all based on lies and propaganda. Us locals love the brumbies.’

Ms Brown said she and her partner were with the brumby clan last week and she was ‘angry’ and can’t stop thinking about what happened.

A NSW NPWS spokesperson told Daily Mail Australia the details of the control measures used would not be publicly disclosed but assured ‘standards are being met’.

‘The Plan balances protection of the heritage value of wild horses and maintaining the exceptional conservation values of the park.

‘To protect the safety of NSW NPWS staff, contractors and visitors, and the welfare of wild horses, operational details about control will not be publicly released.’ 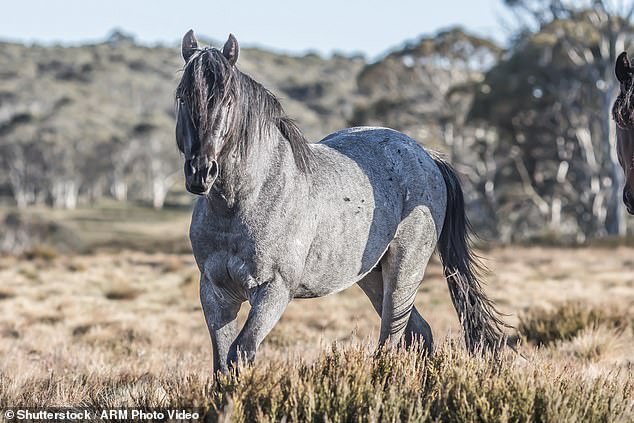 They say all measures are carried out at the highest possible animal welfare standards.

A plan to reduce the brumby population at the park was introduced in November 2021 under the Kosciuszko Wild Heritage Act.

The act states it will protect the values of the wild horse population at a number of 3,000 horses in 32 per cent of the park.

The act states that it, ‘maintains the environmental values of the park by reducing the wild horse population from an estimated 14,380 horses to 3,000 horses by 30 June 2027. Under the plan, there will be no wild horses across 68 per cent of the park.’

On radio 2GB on Tuesday morning, veteran broadcaster Ray Hadley weighed in on the killing of the brumbies saying he had information the killings weren’t ‘clean kills’ with many dying from bleeding out.

Mr Hadley said he reached out to the NSW Environment Minister James Griffin but that he was ‘strangely’ unavailable.

‘Did you kill the horses in this fashion which has been depicted to me, left them to die, did you do that?’ Mr Hadley asked during his morning program.

‘Well, I’ve got a tip for you, James – I don’t think I’ve ever spoken with you, privately or on-air – but I have a history over the last 25 or 30 years of not relenting.

‘I’ll drive you cuckoo right up until the election, demanding an answer as to whether National Parks and Wildlife had anything to do with the slaughter of these 11 horses, including mares in foal.’

The Kosciuzsko Wild Heritage Act it ‘recognises and protects wild horse heritage values in Kosciuszko National Park and enables active management of the wild horse population to reduce their impact on the park’s fragile environment’.

‘The removal of wild horses will occur in accordance with best practice animal welfare requirements.’