When Canadian lawyer Sarah McLean first took up knitting in 2017, she was drawn to the craft her grandmother loved as a way to relax and make useful items for family and friends.

Little did the expat, who lives in Italy, imagine that three years on, she would spend the greater part of 2020 knitting an ever-expanding, shell-shaped sculpture with rippling edges and creeping tendrils that contains within its stitches a precise record of Italy’s COVID-19 cases, deaths and recoveries.

The woolen sculpture, McLean says, has all but taken over the dining room — and life — she shares with her Italian husband and three children in Florence.

“I started with a chain of white stitches showing the first people who were diagnosed with COVID in Italy,” said McLean as she thinks back to March, 2020, when she first began tuning into the country’s evening televised COVID-19 updates.

“Then, unfortunately, I had to start adding red stitches as people started dying … It was a way for me to become conscious of what was going on around me and to process it through a craft I love.”

Project took on a life of its own

By fall, after a prolonged dip in cases and deaths, Italy was in the grip of a full-on second wave that would result in more deaths than the first, bringing the total number of dead here to almost 75,000, with some two million recorded cases.

As McLean found herself overwhelmed with the hours needed to keep up with the ballooning cases — not to mention finding innovative ways to count the stitches and to extend her knitting needles — the project suddenly became a lot more personal. 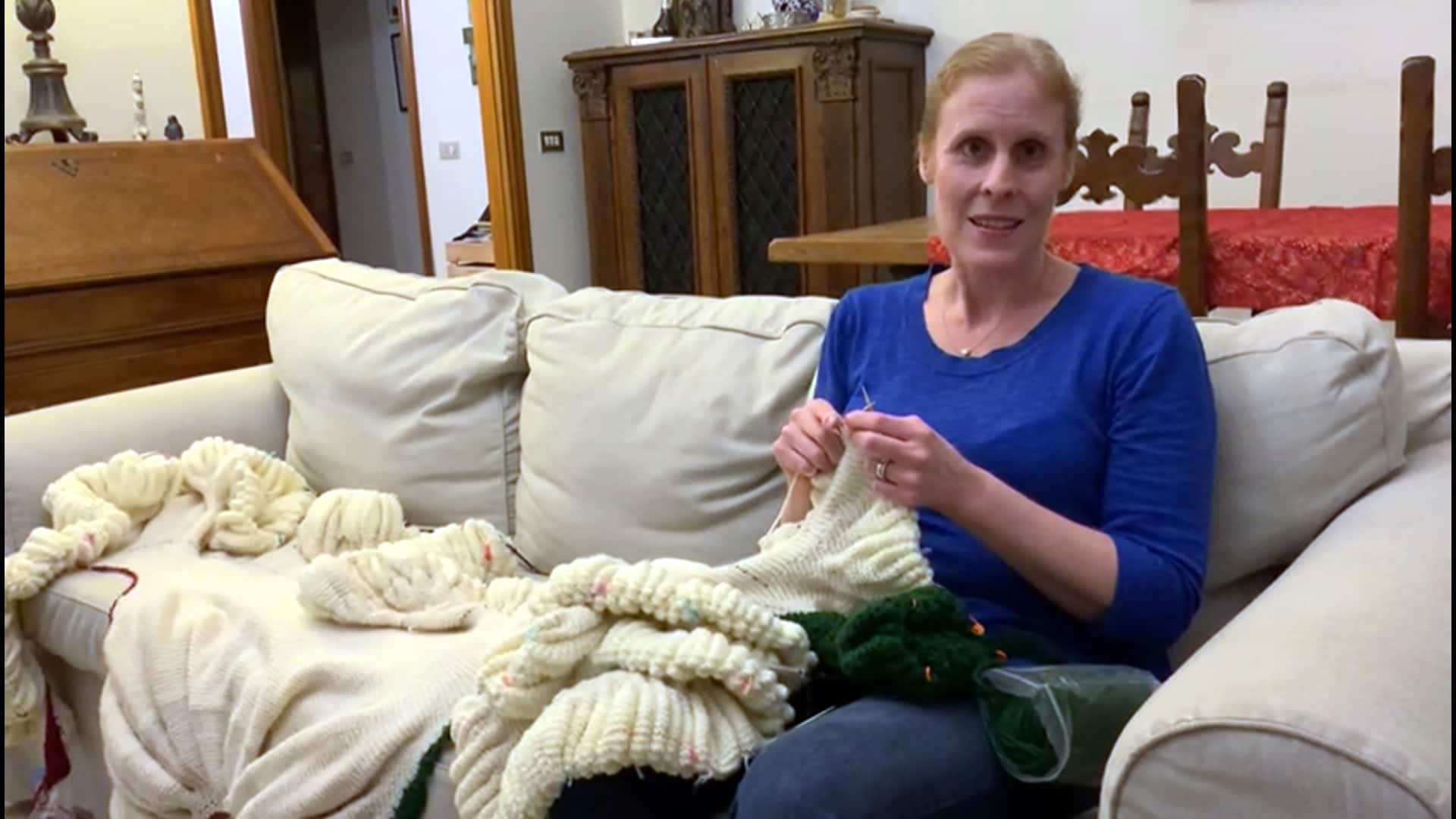 Sarah McLean, a Canadian living in Florence, Italy, explains why knitting a project that documents the country’s COVID-19 cases, deaths and recoveries is important to her. 0:30

In November, her family of five all tested positive for COVID-19 and entered quarantine.

“When it’s you, it’s a humbling thing. You put yourself in perspective. When you’re knitting thousands of white stitches, you think, ‘OK, this one stitch.’ And because one stitch is 100 people, it’s not just my family, it’s also the gym teacher and everyone else we know in Florence,” McLean said.

“We’re just one little drop in the bucket. Just one family trying to figure out how to take out the garbage in quarantine.”

McLean and her family, who all recovered, jokingly refer to the knitted COVID-19 record as a Greek mythological figure. It now contains almost four kilograms of yarn and stretches well past the edges of the dining room table.

Long record of crafts documenting history in the making

While the knitted data-collecting creature may conjure mythical monsters, textile and knitting artists themselves have populated mythology and fiction.

The threads or yarns of the Greek Fates controlled human destiny; in Homer’s Ulysses, Penelope prolongs her weaving to protect herself from forced marriage; and Arachne, a mortal master-weaver is turned into a spider for depicting a less-than-flattering history of the gods. In Charles Dickens’ A Tale of Two Cities, the unsuspected French revolutionary Madame Defarge covertly codes a hit list in her knitting.

Three Ontario women have begun work on a COVID-19 memorial blanket that is intended to honour the lives of all people who have died from the virus in Canada. As Kelda Yuen explains, they’re hoping other knitters will join the effort. 1:58

Susan Fohr, Curator of Education at the Textile Museum of Canada in Toronto, says there is also a long tradition of real-life crafters recording historic moments of personal and social upheaval through textiles and knitting.

She points to the arpilleras within the museum’s own collection as one example. The colourful cloth patchworks were made by the mothers, aunts and grandmothers of the desaparecidos during the military dictatorship of Augusto Pinochet in Chile from 1973 to 1990.

“Women were responding to what was happening in their country, in particular loved ones who had gone missing,” said Fohr, of the scenes of human rights violations depicted in the arpilleras. “They were not only documenting what was happening, but [the arpilleras] were then taken out of the country where they raised awareness of the issues in other parts of the world.”

Because they were stitched with fabric scraps, she says, they went under the radar of authorities.

More recent examples of women using their craft to draw attention to social issues are “yarn bombers,” a movement that began with feminist street artists who used knitting to reclaim sterile public spaces, and the handmade pink pussy hats that popped up at protests after Donald Trump was elected U.S. president.

Groups of knitters are also recording climate change in scarves with coloured yarn representing different temperatures. It’s something McLean herself began doing before switching to tracking the coronavirus.

“The structure is basically a binary code,” said Fohr, referring to the variations of ‘knit one, purl two” — similar to the ones-and-zeroes pattern used for computing coding, though with knitting, discovered long before computers were invented. “The stitches lining up in knitting creates a grid structure, just as the nature of the structure of the cloth lends itself to recording data.”

Shortly after the number of COVID-19 cases shot up in English, she knitted her own sculpture resembling the virus because she was moved by its beauty, despite it “being quite a horrible thing.” She has a second COVID-19 knitted sculpture of the “dead virus” that she plans to unveil when most in her country have been vaccinated later this year.

Brownett says she is glad to hear of Sarah McLean’s COVID-19 data project because she says it helps dispel the idea of knitting as quaint, old-fashioned and irrelevant.

“There are so many exciting things you can do with knitting, not to mention all the new smart fibres used in surgery and spacecraft,” she said, adding knitting has always held codes and records, even its embodiment of shifts in styles and colour trends.

But like the millions of others who have taken up crafting or other hobbies during the pandemic, both Brownett and McLean say a powerful appeal of their craft is its repetitive nature – the marking of the passage of time in this historic moment in a way that is calming and meditative.

There is something very satisfying in creating art and something tangible that we can hold on to at a moment when we feel alone and disconnected.– Psychologist Lynne Rothwell

Psychologist Lynne Rothwell recently published an article on knitting during the COVID-19 pandemic in the British Psychological Society’s magazine. In it, she cites evidence of how knitting reduces cortisol, the stress hormone, and has effects similar to meditation.

“I found it interesting the link between changes in life … middle age or illness … when people can become low from a lack of purpose and [the discovery of] new purpose,” she said in an interview.

Rothwell says the return to traditional crafts is likely also due to the fact they can be done indoors and are relatively cheap and easy to learn on YouTube. But, she insists the reasons go deeper, to the connection with the past and one’s heritage that many find reassuring in a time of crisis.

“There is something very satisfying in creating art and something tangible that we can hold on to at a moment when we feel alone and disconnected,” said Rothwell.

Sarah McLean agrees, saying her COVID-19 creature has helped her literally get a hold on the pandemic that swept over Italy and into her own life.

“It’s helpful for me to understand the world better and I think for my children to see a more concrete and a physical representation of the pandemic,” she said. “That’s also something comforting.”

She says despite the hours of knitting required each day, she remains committed to recording Italy’s COVID-19 data to the end.

She also looks forward to the time when her stitches will taper off into “a little chain of white and green” and the quick and quiet click of needles will at last go silent.