This is the terrifying moment a group of yobs had a fight inside a McDonald’s before one pulled out a huge knife.

The brawl broke out at a McDonald’s in Hackney, London, yesterday in front of several shocked customers.

Footage shows the gang – who all appear to be young men – wrestling with each other before one pulls out a crutch and uses it as a weapon.

Members of staff are forced to intervene when the fight escalates into an all-in row in the middle of the restaurant floor – with one male worker being pushed backwards by the men.

The brawl broke out at a McDonald’s in Hackney, London, yesterday in front of several horrified customers 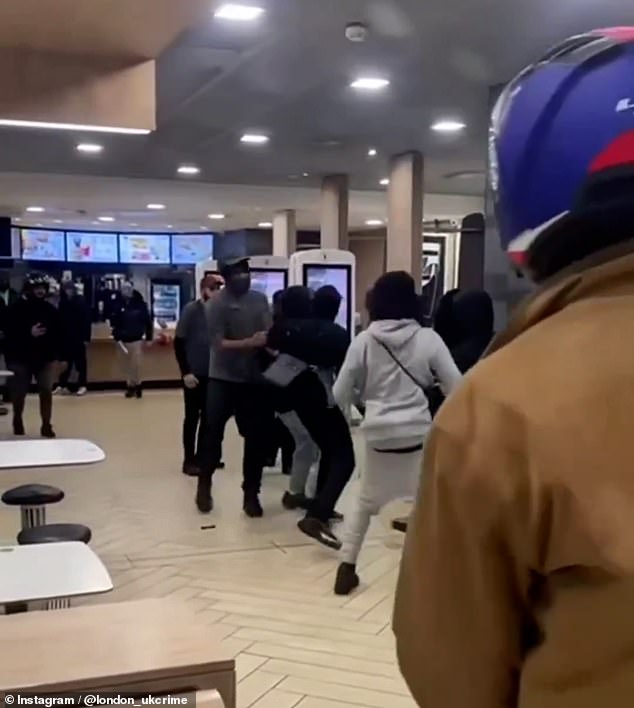 Punches are thrown and shouts can be heard – as one involved in the incident shouts ‘What are you doing bro? Leave bro.’

Meanwhile, one of the yobs involved in the fight pulls out a massive knife, according to The Sun.

The row then spills out to the ordering counter area and eventually the group of thugs leave the premises.

In the video, which was shared on Instagram, one social media user commented: ‘Absolute cowards. I’d bet each one of them would run a mile if confronted one on on. Hyenas hunting in packs.’ 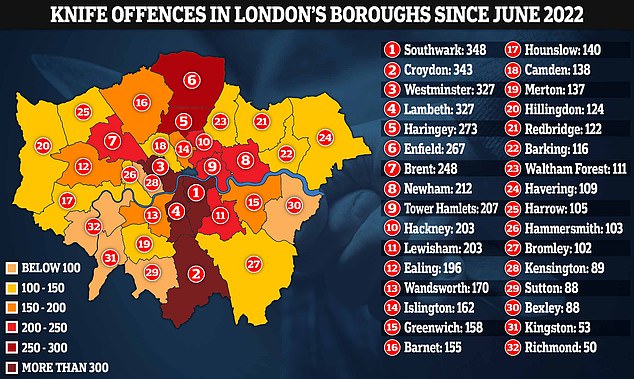 Met Police responded to 13,405 incidents involving knives in just 12 months, in a further sign Lawless London has become the knife crime capital of the country

It comes as Met Police responded to 13,405 incidents involving knives in just twelve months, it was reported in December, in a further sign lawless London has become the knife crime capital of the country.

It was confirmed that the central borough of Westminster has the highest rate of offences by population with 253 since June, accounting for about one incident per 1,000 people.

Meanwhile, Bromley, Kingston upon Thames and Richmond upon Thames have the lowest rates in London, according to recent figures.

August last year proved the most dangerous month across the board with 1,125 offences alone, compared to 850 in February. 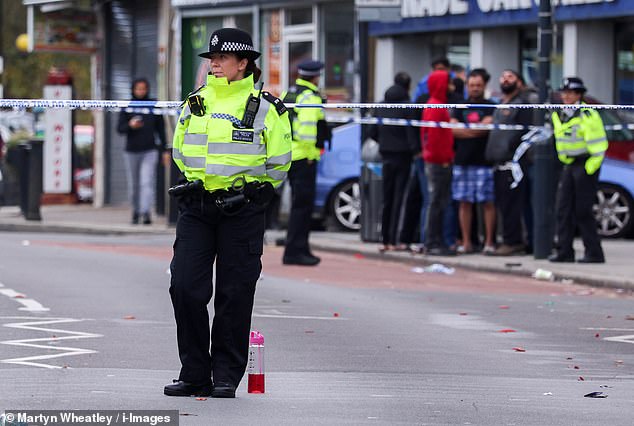 WEMBLEY: Officers at the scene of just one of London’s fatal stabbings – this one in Sudbury Town on October 30

Nearly a quarter of all killings and more than half of shootings in London are linked to gangs, mayor Sadiq Khan revealed earlier this year.

The youngest victim was 11-month-old Hazel Prajapti, while the oldest was Thomas O’Halloran, 87, who was killed in Greenford.

London saw 36 hours of violence and tragedy between Thursday afternoon and yesterday evening as six people were stabbed and a woman was found, according to MyLondon.