EXPRESS INFORMER > News & Politics > Knife crime soars by 7% to highest ever level with 45,627 offences in England and Wales in 2019

The number of recorded knife crimes in England and Wales soared by 7 per cent its highest ever level in 2019, with a third of all offences recorded in London.

Figures released by the Office for National Statistics today show that police recorded 45,627 offences involving a knife or sharp instrument.

This is an average rate of 125 knife crimes per day between last January and December – 49 per cent higher than when comparable recording began in 2011.

But the true number of knife crimes in England and Wales is likely to be higher, as the figures do not include Greater Manchester Police.

Meanwhile there were 660 recorded cases of rape and sexual assault involving a knife, and 242 cases of knife-related homicide.

A MailOnline graph shows that recorded knife-related offences in England and Wales rose by 7 per cent in 2019 from 2018, and increasing 49 per cent since April 2010-March 2011

The figures also show a 15 per cent rise of homicides recorded by the Metropolitan Police in the last year – to 146 from 127.

Of all recorded homicides last year, 40 per cent involved a knife or sharp instrument, a similar proportion to 2018, according to the data. 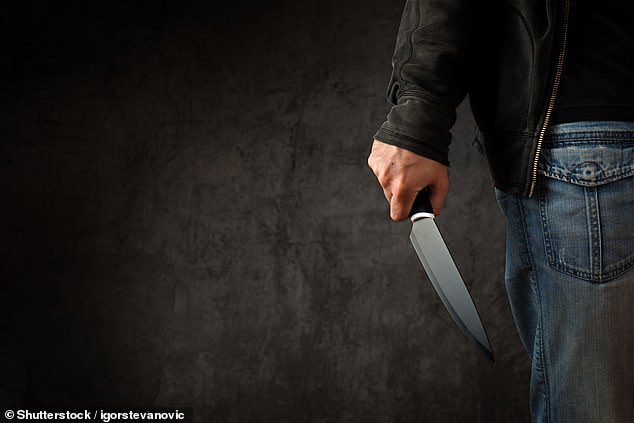 The number of recorded knife crimes in England and Wales has soared by 7 per cent to its highest ever level, with nearly half of all offences in London (stock image)

The rising trend in knife crimes could be driven by an increase in robberies, the ONS suggested, after the number soared 12 per cent to 83,930. 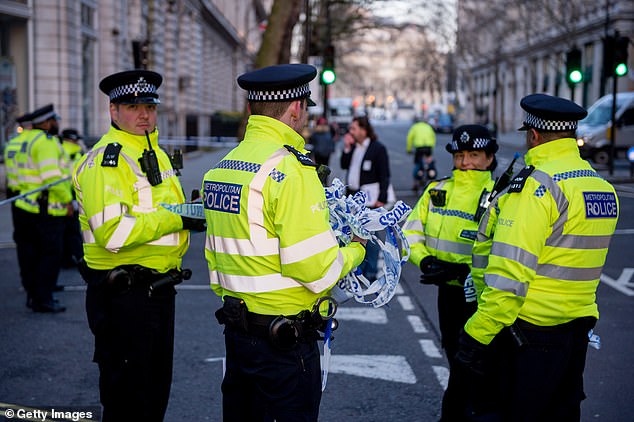 Joe Traynor, from the ONS, said: ‘Knife or sharp instrument offences continue to be concentrated in metropolitan areas across England and Wales, with around a third (34per cent) of all offences recorded by the police in London.’

Diana Fawcett, chief executive of the charity Victim Support, said: ‘We are concerned that reports of knife crime and homicide have risen.

‘Although the streets are quieter, the impact of knife crime is still being felt.

‘Many victims will still be dealing with the emotional consequences of threats or attacks which took place long ago.’