Hollywood conservatives have been speaking out after Joe Biden was declared the winner of the 2020 presidential election to become the 46th president of the United States.

While a majority of those who work in the entertainment industry are left-leaning and fully endorsed Biden, there are some who have publicly endorsed Trump and are now following the president’s line and arguing that Biden’s win is not legitimate.

Some have even gone so far as to claim Trump has been re-elected to a second term in the White House.

Minutes before Biden was projected to be the next U.S. president, actress Kirstie Alley, 69, shared her skepticism of the voting results. 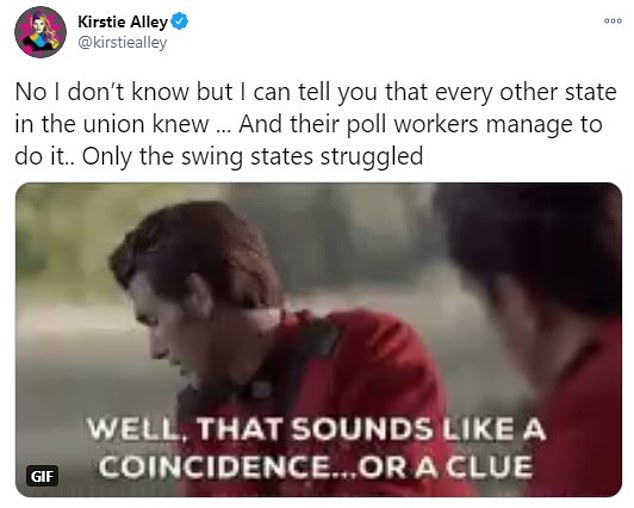 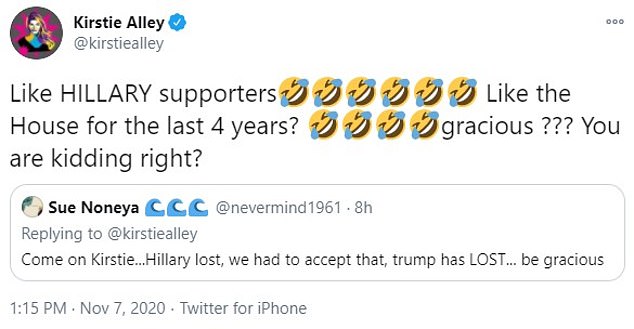 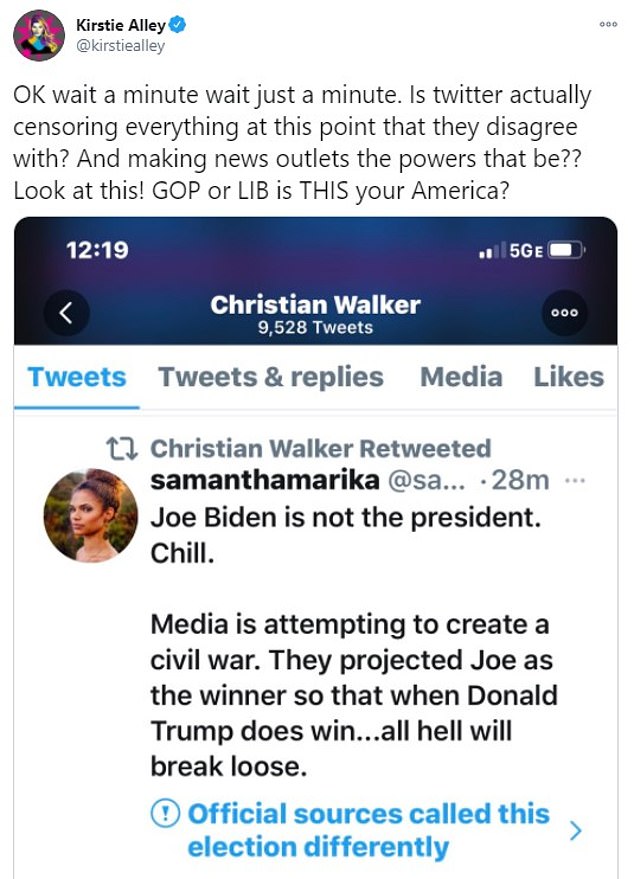 Over the course of several tweets and messages, actress Kirstie Alley, 69, shared her skepticism of voting results in the 2020 Presidential Election 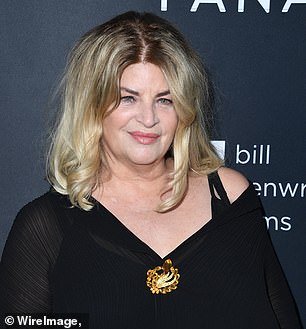 ‘C’mon!! All the known, before the election, swing states are the ones having trouble and not able to count in one day?! .. That doesn’t raise questions with anyone other than Trump voters? Come on now.. C’mon. Cooooooooome oooooooooon,’ she wrote.

Alley also shared her frustration with Twitter and their censoring of tweets.

‘OK wait a minute wait just a minute. Is twitter actually censoring everything at this point that they disagree with? And making news outlets the powers that be?? Look at this! GOP or LIB is THIS your America?’ she said along with a picture of a woman’s tweet claiming Biden is not the president with a warning stating, ‘Official sources called this election differently.’

When Alley was told by another user that she needed to ‘graciously’ accept that her candidate lost, she did not react well: 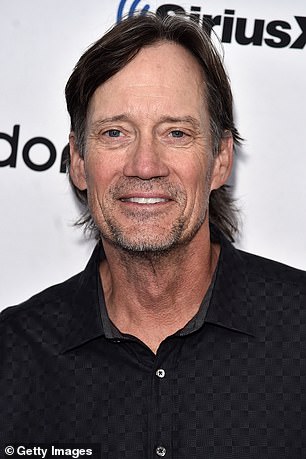 Actor Kevin Sorbo, 62, laid into the Democrats and their supporters throughout election week.

Actor Kevin Sorbo, 62, laid into the Democrats and their supporters throughout election week.

‘Voter fraud is real, folks. It’s been around for a long time, but this year ‘they’ are blatant about it and don’t care if ‘we’ know it. All to get rid of Trump,’ he stated.

On Saturday, Sorbo demanded a recount.

‘Throw out every illegal vote and do a recount. Really not that difficult,’ Sorbo tweeted.

‘So do we get to say #NotThePresident or is that only for the left?’ he added in another posting. 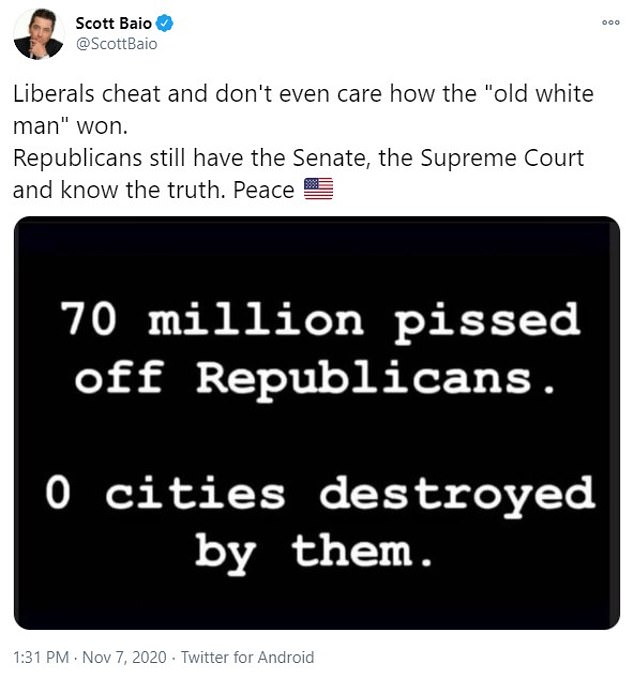 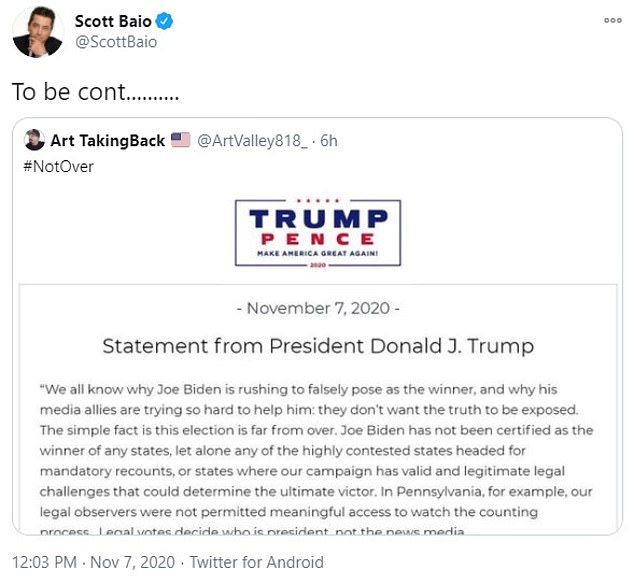 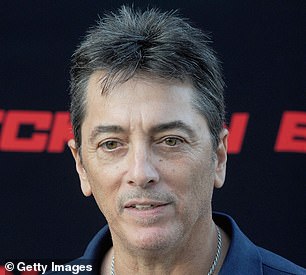 Happy Days actor Scott Baio who had been openly praising Trump in the months leading up to the election and also criticizing Facebook and Twitter for censoring the president’s posts on social media re-tweeted a statement which accused Biden of ‘rushing to falsely pose as the winner’ declaring ‘this election is far from over.’

‘Liberals cheat and don’t even care how the ‘old white man’ won. Republicans still have the Senate, the Supreme Court and know the truth. Peace’ he added. 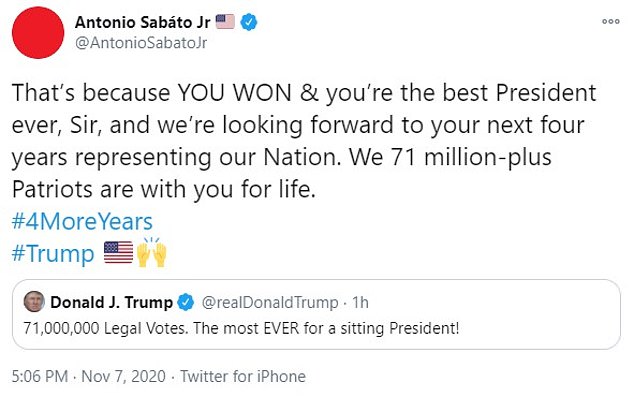 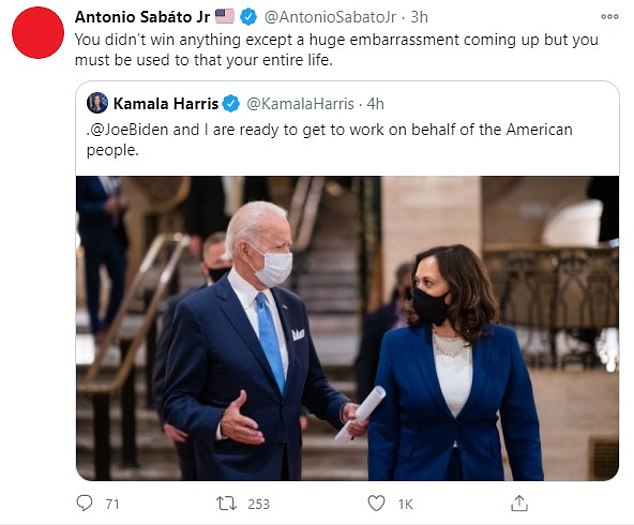 Actor and politician Antonio Sabato Jr., 48, took a very Trumpian view of the election on Twitter and instead of calling Biden the president-elect he congratulated Trump on the win 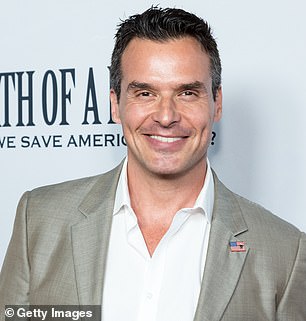 Actor and politician Antonio Sabato Jr., 48, took a very Trumpian view of the election on Twitter and instead of calling Biden the president-elect he congratulated Trump on the win.

‘This is our FREEDOM LEADER and we the American people will stand with you and fight till the very end. WE WON!!!! 4 MORE YEARS HE IS MY PRESIDENT @realdonaldtrump,’ Sabato Jr. wrote.

In response to Trump’s tweet which saw the president write: ‘I WON THIS ELECTION BY A LOT!’ Sabato Jr. replied, ‘WE KNOW, SIR!!!!!!!!!! CONGRATULATIONS’

‘YOU WON & you’re the best President ever, Sir, and we’re looking forward to your next four years representing our Nation. We 71 million-plus Patriots are with you for life,’ he added.

‘TRUMP WON BY A LANDSLIDE!!!! HE WILL HAVE 4 MORE YEARS,’ Sabato wrote on Friday evening.

In response to a tweet by Vice President-elect Kamala Harris Tweet in which she stated ‘JoeBiden and I are ready to get to work on behalf of the American people,’ Sabato had few kind words.

‘You didn’t win anything except a huge embarrassment coming up but you must be used to that your entire life,’ he wrote.

‘PRESIDENT TRUMP WON THIS WEEK SO ENJOY. THE BEST IS YET TO COME,’ Sabato wrote in another delusional post. 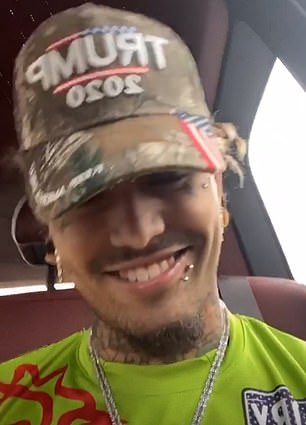 Rapper Lil Pump, 20, posted a video to Instagram where he can be clearly seen wearing Trump merchandise

‘God appointed our President he did not appointed Joe Biden I can guarantee you that!!!! #TrumpBestPresidentEver #4MOREYEARSCOMINGUP’ Sabato added.

Country singer Bonnie Paul showed her support for Trump by retweeting a statement posted by the president stating the ‘election is not over.’

Rapper Lil Pump, 20, posted a video to Instagram where he can be clearly seen wearing Trump merchandise.

The rapper can be seen sporting a Trump 2020 hat while dancing to music in his car.

In the days following the election, he urged Trump supporters to remain calm, declaring, ‘Our man will be re-elected,’ and promised to leave the U.S. should Biden win. 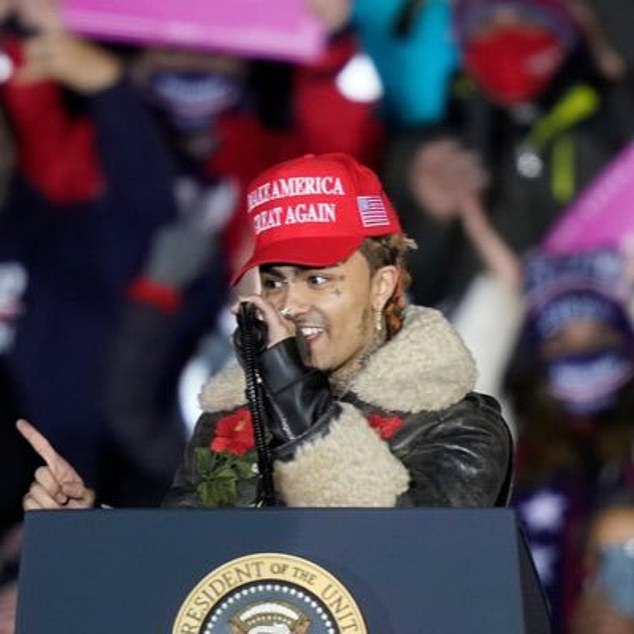 In the days following the election, he urged Trump supporters to remain calm. During the campaign he took part in a rally alongside the president 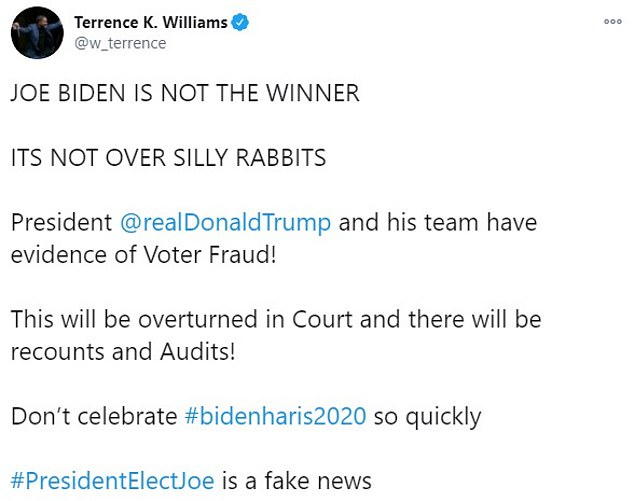 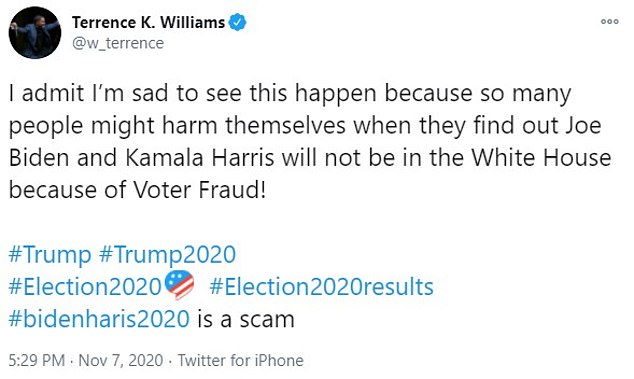 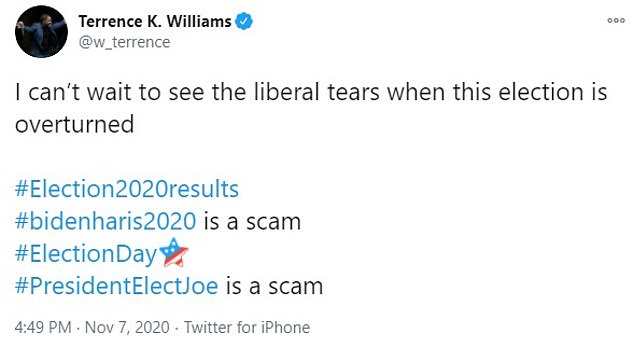 Another pro-Trumper, comedian Terrence K. Williams demanded ‘Democrats to confess and turn themselves in for Voter Fraud.’ 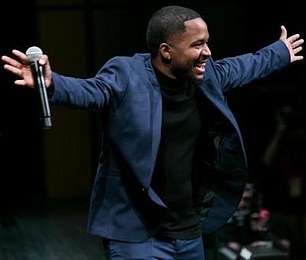 Terrence K. Williams posted several tweets declaring the election to be a scam and suggested the results would be overturned

Another pro-Trumper, comedian Terrence K. Williams demanded ‘Democrats to confess and turn themselves in for Voter Fraud.’

He then went on to tell Americans not to celebrate quite so fast.

‘JOE BIDEN IS NOT THE WINNER ITS NOT OVER SILLY RABBITS President @realDonaldTrump and his team have evidence of Voter Fraud!’ Williams tweeted on Saturday.

‘This will be overturned in Court and there will be recounts and Audits! Don’t celebrate #bidenharis2020 so quickly #PresidentElectJoe is a fake news.’