The King’s goddaughter, India Hicks, has shared photos of herself posing in mourning attire with fans on Instagram, following the Queen’s state funeral on Monday.

Hicks, 55, shared two images with her 345,000 followers on Instagram – including one with her mother Lady Pamela Hicks, who also attended the service at Westminster Abbey yesterday.

In an emotive post, Hicks, who was bridesmaid at the King’s wedding to Princess Diana in 1981, said it had been a ‘privilege’ to attend the service.

In the photos, Hicks is seen wearing a fitted black dress with an ornate pattern, matched with a striking tilted headpiece with oversized floral decoration; the socialite and mother-of-five also wore black suede knee-high boots for the historic occasion.

King Charles’ goddaughter India Hicks, 55, accompanied her mother, Lady Pamela Hicks, 93, a bridesmaid for the Queen, into Westminster Abbey yesterday, posing for photos in their mourning attire, which Hicks then shared to her Instagram page 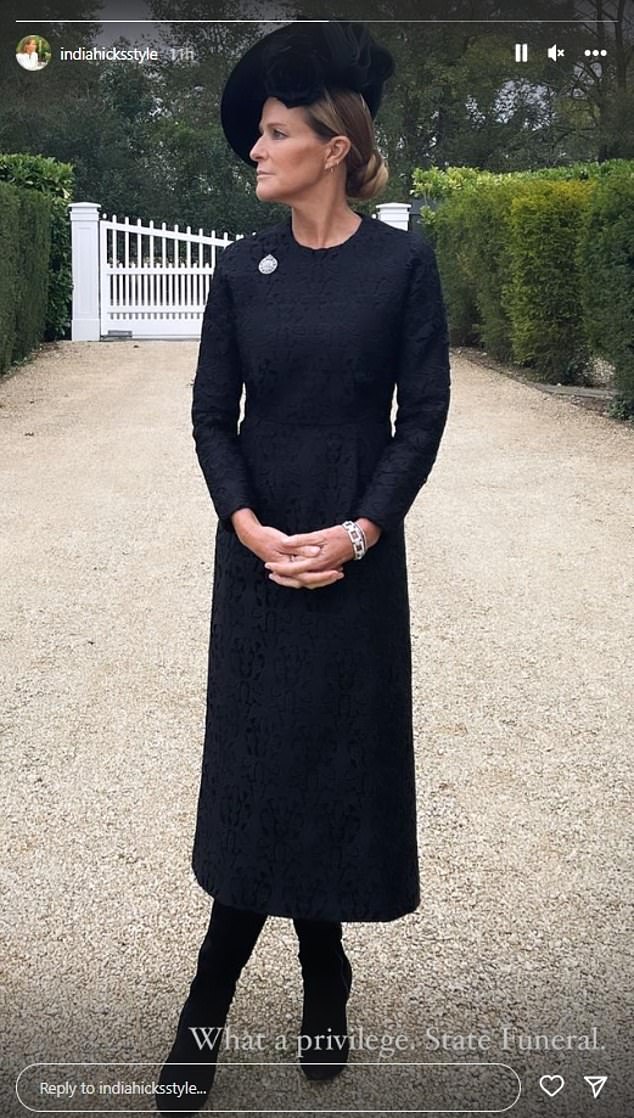 In the photos, Hicks is seen wearing a fitted black dress with an ornate pattern, matched with a striking tilted headpiece with oversized floral decoration

Lady Pamela Hicks, who is Prince Philip’s cousin and the daughter of Louis Mountbatten, 1st Earl Mountbatten of Burma, looked straight at the camera for the photograph of herself with her youngest daughter.

Wearing a stylish pleated dress, with patent black loafers and a wide-brimmed hat, the aristocrat belied her 93 years. Both ladies wore brooches, with Lady Pamela donning a diamond bow brooch, alongside a five-string pearl necklace.

Hicks captioned the photos on her social media account, saying: ‘What a privilege. To have seen the sun set over Westminster Abbey last night and to return today, beside my mother, for the State Funeral, followed by the Committal Service in St. George’s Chapel, Windsor.’ 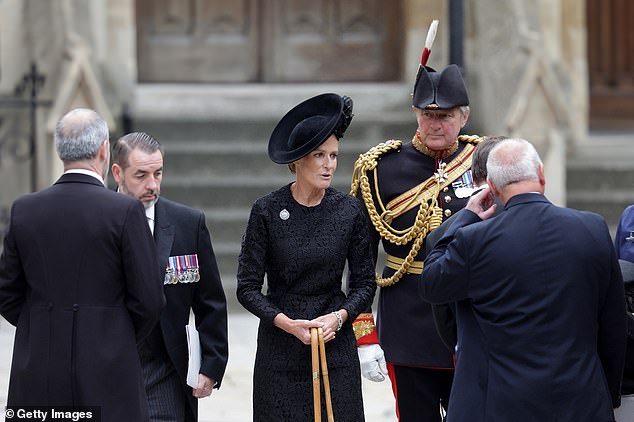 India, who shares sons Wesley, 24, Felix, 24, Amory, 22, Conrad, 18, and daughter Domino, 13, with her partner David Flint Wood, lives in the Bahamas but was in the UK last week to celebrate her one year wedding anniversary when the Queen passed away aged 96 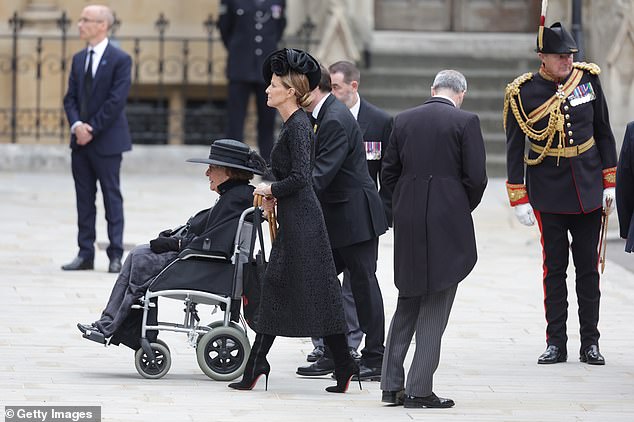 India, 55, looked sombre in all black including a long sleeved black dress with and knee-high Louboutin boots, as she walked alongside her wheelchair-bound mother Lady Pamela Hicks into Britain’s most historic church 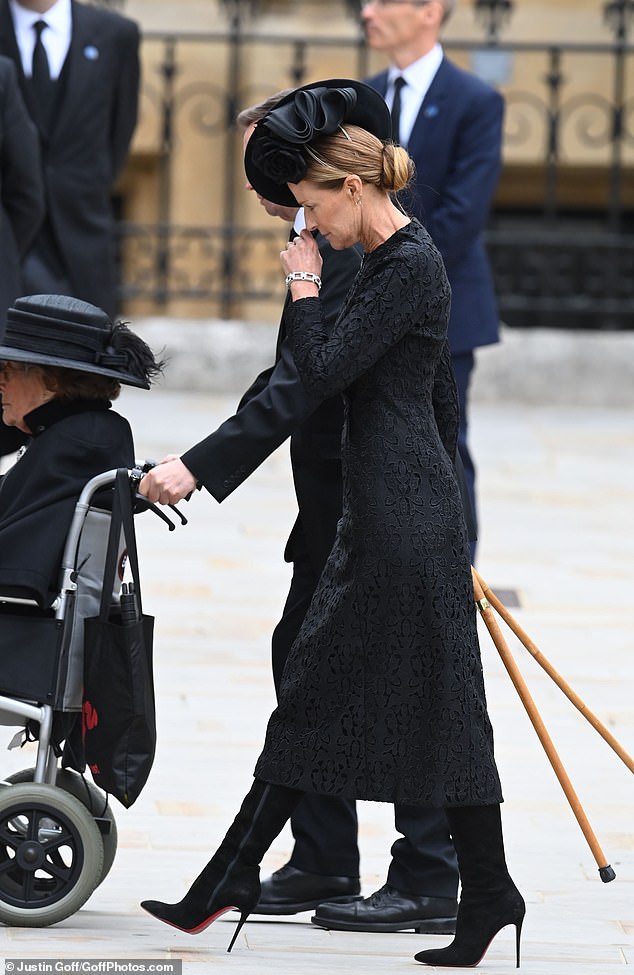 India, who shares sons Wesley, 24, Felix, 24, Amory, 22, Conrad, 18, and daughter Domino, 13, with her partner David Flint Wood, lives in the Bahamas but was in the UK last week to celebrate her one year wedding anniversary when the Queen passed away aged 96.

Lady Pamela’s father, Earl Mountbatten, was affectionately known as ‘Uncle Dickie’ by Prince Philip and the Queen, and was seen as hugely influential in the early life of both royals.

Through her father she is a great-great granddaughter of Queen Victoria and Prince Albert of Saxe-Coburg and Gotha, also making her a distant cousin of the Queen. 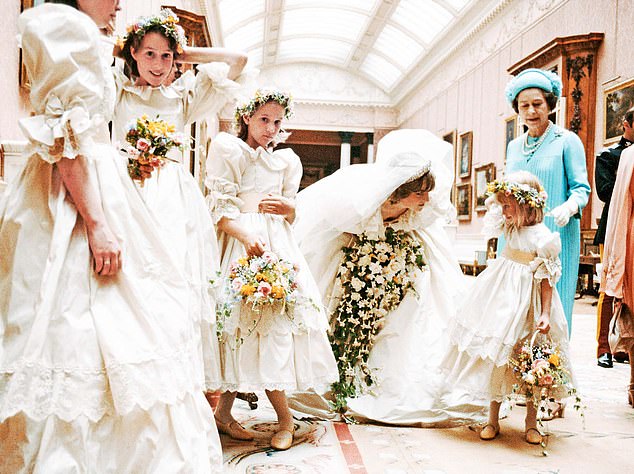 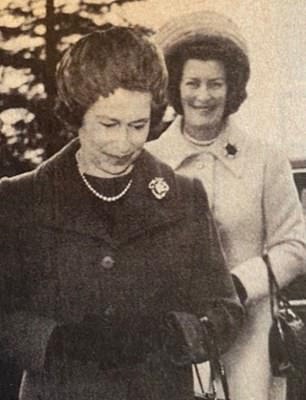 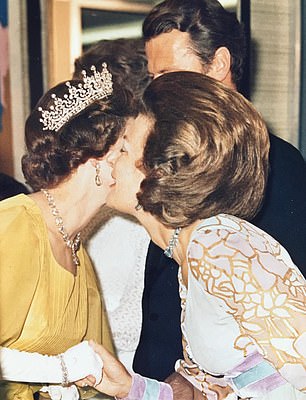 Lady Pamela is the daughter of Earl Mountbatten, the brother of Prince Philip’s mother. She previously served as a lady-in-waiting to Her Majesty. The pair have been lifelong friends, pictured throughout their life

Lady Pamela has previously shared insight into family life for the Windsors.

She recalled in a podcast interview last year how the Queen was always ‘patient’ and ‘kind’ to her mother-in-law Princess Alice of Battenberg, who could be ‘very sharp and difficult

‘I remember, she was staying at Windsor and we were waiting to go into lunch,’ Lady Pamela recalled. ‘The equerry had come to collect her for lunch with the Queen. 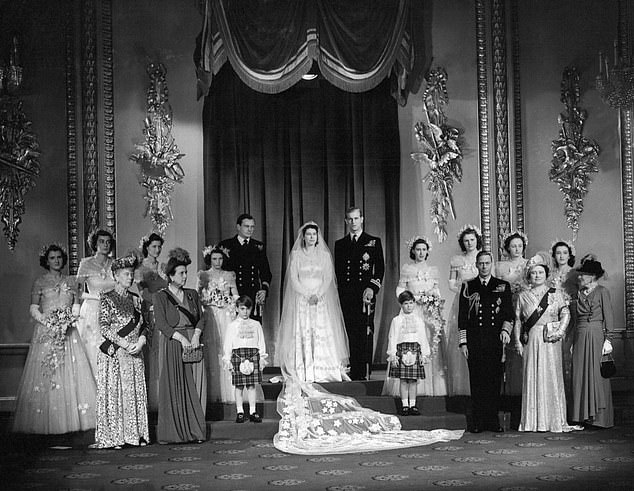 ‘He was a new equerry, a young man of about 20, and thought he must entertain Princess Alice and talk to her.

‘He unwisely asked, “and what have you been doing this morning, Ma’am,’ to which Princess Alice replied: “And what has that got to do with you?”‘

Lady Pamela also explained that, despite living under the same roof as her son, Princess Alice and Prince Philip led very separate lives.

‘She was in a dressing gown, by choice, in the attic,’ Lady Pamela said. ‘While Prince Philip was very busy down below.’