It will not please the growing band of eco-investors who passionately support environmentally friendly firms, but shares in Thungela Resources have roared away in spectacular style thanks to the rise in coal prices.

Thungela is hardly a household name, however it has been the best performer on the London market this year after being spun out of FTSE100 mining giant Anglo American at a bargain price of just £1.50 a share 18 months ago.

Since then, its stock has soared by a staggering 600 per cent, taking the company’s value from £210million to £1.56billion.

Ironically, Anglo wanted to distance itself from Thungela precisely because of its involvement in coal, now seen as a dirty fossil fuel.

Investors had been putting Anglo under pressure for years with calls for it to go greener. It chose the worst possible moment to sever ties.

The split took place just before coal prices flared up to record highs in the wake of the invasion of Ukraine as countries scrambled to find replacement energy sources for Russian gas.

This has all been an unwelcome development for the Square Mile, much of which had left coal for dead and turned to more onmentally friendly investments.

Investors in Thungela, which means ‘ignite’ in isiZulu, have seen their shares do just that, rising by as much as 1,100 per cent since the spin-off.

These shareholders include hedge fund manager Crispin Odey and chief executive July Ndlovu, who has made a paper gain of around £12million on his shares. Recently, though, the price has begun to flag.

Thungela runs seven thermal coal mines in South Africa. These will wind up in the next 12 years unless it extends them.

Its main stock market listing is in Johannesburg. So far this year its stock has soared by 200 per cent – far outstripping any firm in the FTSE All-Share.

On the junior AIM market, it is a similar story. Another coal group, MC Mining, is the biggest outperformer on that index by a wide margin.

Because coal had fallen so out of favour in the City, Anglo virtually ‘gave Thungela away’ with a ‘lowly’ valuation, according to AJ Bell investment director Russ Mould.

He said: ‘Anglo’s intention may have been to clearly signal its virtues and determination to walk away from fossil fuels, but it did present investors with a bit of a bargain, as it turns out – providing they were prepared to focus on profits rather than principles.’ 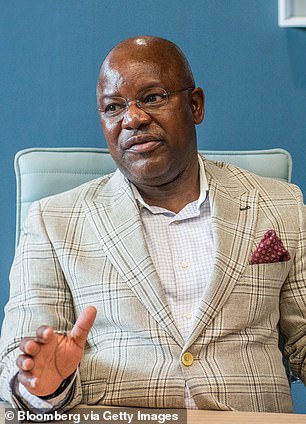 Tom Price, commodities specialist at Liberum, said: ‘You couldn’t have dreamt of a better time in the history of coal to do this launch.’

Half-year profits reported in August came in at £580million amid the coal price surge, from just £13million the year before. Investors, including Anglo shareholders who were given Thungela stock in the spin-off, have reaped enormous dividends. The group is expected to hand back 90 per cent or more of the cash it does not need to run its day-to-day operations.

Around a third of electricity globally is generated by coal. But the revival is forecast to cool off as soon as next year.

Benchmark South African coal prices climbed above $300 (£255) a ton over the summer from $164 this time last year. Broker Liberum predicts they will drop back to $166 by next winter.

Thungela shares hit nearly £18.60 in September but are down by more than a third since then.

A Thungela spokesman said cash has been returned to investors and money has been put into a clean-up fund for when mines close down.