King Charles will be ‘deeply upset’ as royal swans ‘drop dead in the water’ from deadly bird flu.

More than 66 swans have been fished out of the River Thames in the past week as the pandemic swoops through the flock.

Signs have been put up along the river bank in Windsor warning people not to get too close to the infected birds.

It’s not the first outbreak of the deadly virus this year, as the late Queen was told in January that seven birds had died.

A further 26 had to be euthanized in a cull that was thought to have ended the outbreak.

But the flu has returned with a vengeance.

Animal lovers have been warned to stay away from the banks of the river and not to feed them to avoid spreading it.

The signs tell walkers to keep to the footpath and keep dogs on leads as well as to avoid bird faeces and feathers.

The royal flock of protected birds numbered 200 on the 3-mile stretch of river that winds round Windsor Castle from Romney Lock to Boveney Lock near Dorney, Berkshire.

But at least a quarter of the iconic birds have been lost since Thursday.

Charity Swan Support pulled 22 dead birds out of the water beneath Windsor Castle on Sunday alone.

A dead swan found in Windsor. Nearly 70 birds have died after being infected with the flu in the past week, more than a quarter of the royal flock

Swan Support chief Wendy Hermon, 54, said: ‘I have been looking after the royal swans for 30 years beneath the Castle and I have never seen anything like this before.

‘In 2018 Avian Flu killed more, with about 70 swans lost. That was over about a month but this time they are dying so fast they are literally dying right in front of your eyes.

‘On Sunday I was recovering the bodies of three swans that had died by Romney Lock and saw a swan that looked unwell in the water but it did not look in real distress.

‘But within ten minutes it just rolled over and died right in front of me,’ Ms Hermon described.

‘It is the speed that these swans are dying at that is frightening as they are literally dropping dead in the water all over the place and every day we are pulling them out.

‘There is nothing you can do as if you take them in for shelter and to treat them, the influenza will kill all of the other birds so you just have to let nature run its cruel course,’ the expert explained. 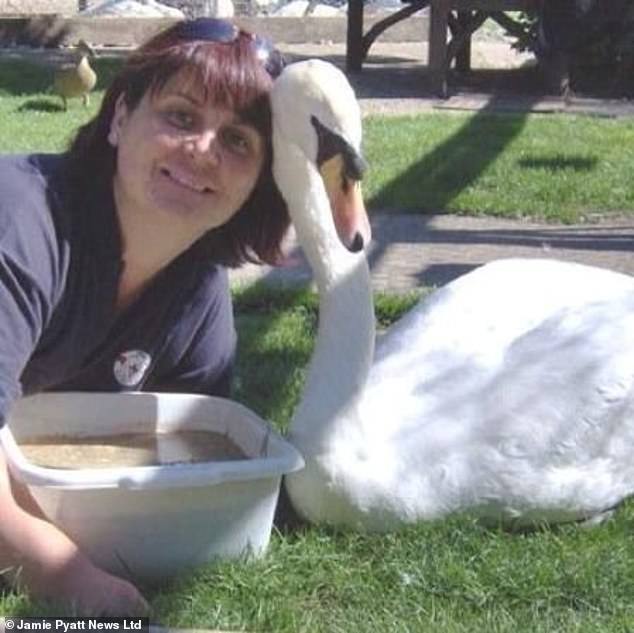 Wendy Hermon, 54, who runs swan charity Swan Support, said she hadn’t seen anything like it in 30 years. She said: ‘They are dying so fast they are literally dying right in front of your eyes’

‘I have 15 volunteers and we are out on the riverbanks and out in kayaks in protective gear and getting as many dead swans out of the water as quickly as we can daily.

‘They all go off for immediate incineration in big bins thanks to amazing help from the Royal Windsor & Maidenhead Borough Council who are doing so much to help us,’ she said.

What is Bird Flu?

Bird Flu (Avian Influenza) is a type of flu that rarely infects humans.

It occurs naturally in wild waterfowl and can be spread to domestic animals, such as chickens and ducks or geese.

However, outbreaks of bird flu in humans have happened in Asia, Africa, North America and parts of Europe.

People are usually infected through contact with infected birds or droppings.

Symptoms usually mimic other types of influenza. Complications of bird flu can have life-threatening risks, including kidney dysfunction and heart problems.

It can take between three to five days for symptoms to develop.

Bird flu does not typically spread from human to human.

Swan Support Chief Wendy added: ‘This is a heart-breaking task for our rescuers as no matter how long you have been rescuing them this deeply affects you.’

A Windsor Castle source said as Head Ranger, King Charles takes an ‘enormous interest’ in the wildlife on royal estates.

‘He will be deeply upset about this major outbreak,’ the source confirmed as the King inherited the swans from his late mother.

The royal family will be kept up to date by David Barber, the King’s Swan Maker, who worked in the role for 30 years for Queen Elizabeth II.

The King’s Swan Marker David Barber received the Royal Victorian Medal from the Queen in 2014 for his services to the royal flock in conserving their future and caring for them.

He wears a ceremonial scarlet coat and a swan feather in his hat while performing his duties leading a flotilla of small boats up the Thames as they capture and count all the swans during the annual Swan Upping, held in July.

The Queen’s Swan Warden, Professor Christopher Perrins said after the outbreak in January that there was little to be done to help the poorly swans.

‘There is nothing you can do as taking in sick birds merely endangers all the others.

‘The surge in infection rates are usually thought to be associated with the arrival of birds such as ducks and gulls from Europe,’ the Oxford University don explained.

The Crown owns all unmarked mute swans found on open water in Britain and the Swan Upping Ceremony is the annual ‘stock take’ of the swans along the River Thames. 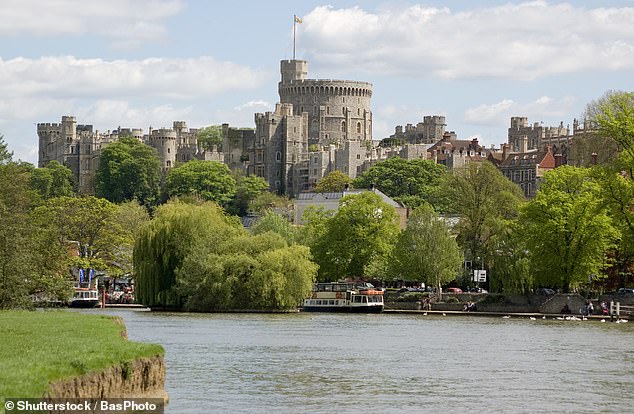 The Crown is the owner of all unmarked mute swans found in open water in Britain, and King Charles will be ‘deeply upset’ over the loss of the birds, experts said

Many more swans have also died due to avian flu on the rest of the River Thames.

The King only exercises his rights on an 80-mile river stretch from Sunbury on Thames to Abingdon.

His official title, inherited from his mother, is the Seigneur of the Swans.

Both the Queen and the King consider the swans on the three-mile stretch below the Castle as the ‘royal flock’ and the King is the only person in the UK allowed to legally eat them.

The Windsor Castle source added: ‘Before there is a storm of outrage it has been several centuries since a swan was served up at a royal banquet and that is how it will remain!’

Swans suffering with bird flu will see symptoms including swimming in circles or drooping their heads.