The King and Queen of Sweden have sent a festive greeting from Drottningholm Castle.

King Carl XVI Gustaf, 74, and Queen Silvia of Sweden, 76, who were photographed in Stensalen in their private apartment, can be seen sitting together in front of a small candlestick ornament that was made by their eldest daughter Crown Princess Victoria, 43, when she was a child.

The festive photograph comes just days after it was announced their son Prince Carl Philip, 41, is expecting his third child with his wife Princess Sofia, 36, and after King Carl Gustaf remarked the country’s approach to coronavirus ‘had failed.’

King Carl XVI Gustaf, 74, and Queen Silvia of Sweden, 76, have shared a picture of them at Drottningholm Castle in Stensalen ahead of Christmas (pictured)

In the picture released today, Queen Silvia looks stylish in a gold and black check jacket featuring bow detail, and can be seen holding a book on her lap.

Meanwhile, King Carl XVI Gustaf opts for a smart grey suit, which he pairs with an off-white shirt and burgundy tie.

In a rare TV appearance on Friday, the Swedish monarch, whose own son and daughter-in-law were forced to isolate after testing positive Covid-19, said Sweden’s numbers were ‘terrible.’

‘I believe we have failed,’ the king said in an excerpt from the program broadcast by SVT on Wednesday. The full show airs on Dec. 21. 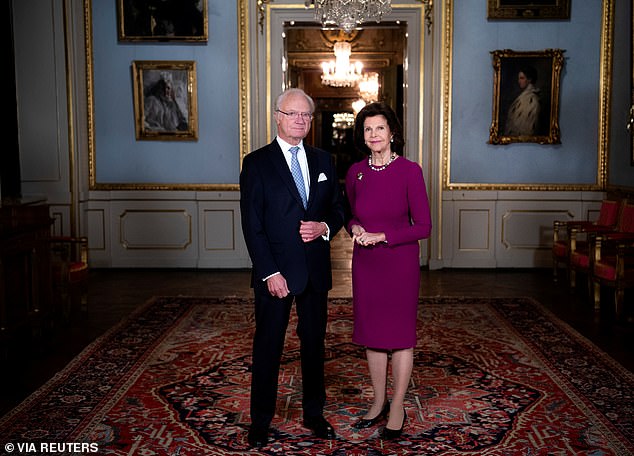 ‘We have had a large number of deaths and that is terrible. That is something that brings us all suffering.

‘The people of Sweden have suffered tremendously in difficult conditions. One thinks of all the family members who have happened to be unable to say goodbye to their deceased family members.

‘I think it is a tough and traumatic experience not to be able to say a warm goodbye.’

During the excerpt, speaking about the possibility of being infected with coronavirus he said: ‘Lately it has felt more obvious, it has crept closer and closed. That’s not what you want.’

While in the spring the government’s response was widely supported by Swedes who carried on much as normal while most of Europe entered lockdown, the rising death toll – particularly among elderly residents of care homes – has drawn increasing criticism.

Prime Minister Stefan Lofven said Sweden’s health experts misjudged the resurgence of Covid-19 and ‘didn’t see such a wave in front of them’. 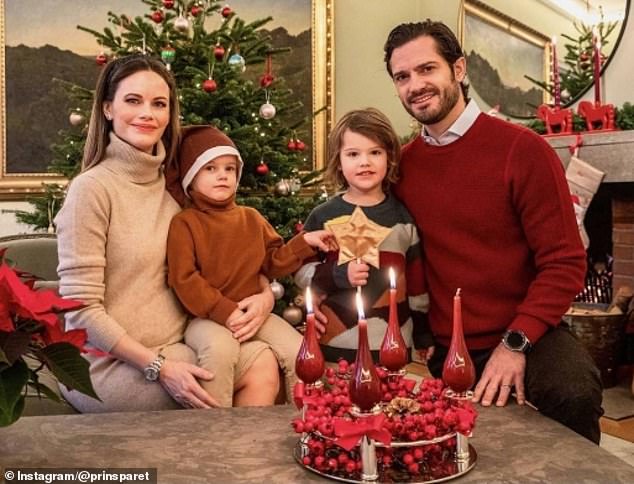 Growing family! Prince Carl Philip of Sweden and his wife Princess Sofia have announced they are expecting their third child together. The couple have two sons, Prince Alexander, four, and Prince Gabriel, three. They shared this family photo after announcing the news

His words come as Sweden registered 91 new deaths on December 16, taking the total to 7,893, a much higher per capita rate than its Nordic neighbors but lower than in Britain, Italy, Spain or France.

The country’s response has stood out from most other international responses, with a relaxed approach championed by state epidemiologist Anders Tegnell.

Lockdowns and face masks were shunned, schools, restaurants and businesses were left open and voluntary social distancing and hygiene recommendations were used to slow the spread.

Carl XVI and Silvia’s son Prince Carl Phillip, who just announced he was expecting, tested positive to covid-19, along with his wife Princess Sofia, and is currently isolating at home with his family.

The couple are suffering ‘light flu symptoms’ and are isolating at their home in Stockholm with sons Prince Alexander, four, and Prince Gabriel, three.

It was also announced that Princess Madeleine, the monarch’s youngest child, who lives in Florida with her British-American husband Christopher O’Neill, was unable to return to Sweden in time for Christmas.