She may be the Queen of celebrities, but Kim Kardashian’s dream of joining the official Platinum Jubilee celebrations in the UK have been dashed.

Despite her best efforts, officials at Buckingham Palace have rejected her pleas to attend the Platinum Party at the Palace on Saturday.

Representatives for the star, 41 — who landed in the UK with her boyfriend Pete Davidson, 28, this week — asked for tickets But the Palace turned the American couple down, as did publicists at the BBC, which will broadcast the show.

A snub for the Queen of celebrities: Buckingham Palace rejected Kim Kardashian’s pleas to attend the Platinum Jubilee official party after the star flew to London with boyfriend Pete Davidson for the celebrations (pictured on Monday)

Kim was so determined to attend that a source told the Daily Mail she is trying to acquire tickets by other means — and has even said she doesn’t mind if the tickets are ‘not VIP’.

They said: ‘Kim rarely gets turned down to attend any event, so this has been quite surprising, especially as she doesn’t visit the UK often. Kim and Pete love the Royal Family and really wanted to be a part of this special celebration.’

It’s not clear if the Jubilee celebrations were the only reason for the couple’s trip to London.

The likes of Queen, Diana Ross and Nile Rodgers will perform at the event, while Sir David Attenborough and David Beckham will make appearances.

Some 10,000 tickets were allocated via a public ballot, and 7,500 have been given to key workers, those in the Armed Forces, volunteers and charities.

Members of the Royal Family are expected to attend on behalf of the Queen, who is ‘pacing herself’ but will be watching on TV from Windsor Castle.

Kim’s representatives declined to comment when approached by MailOnline. 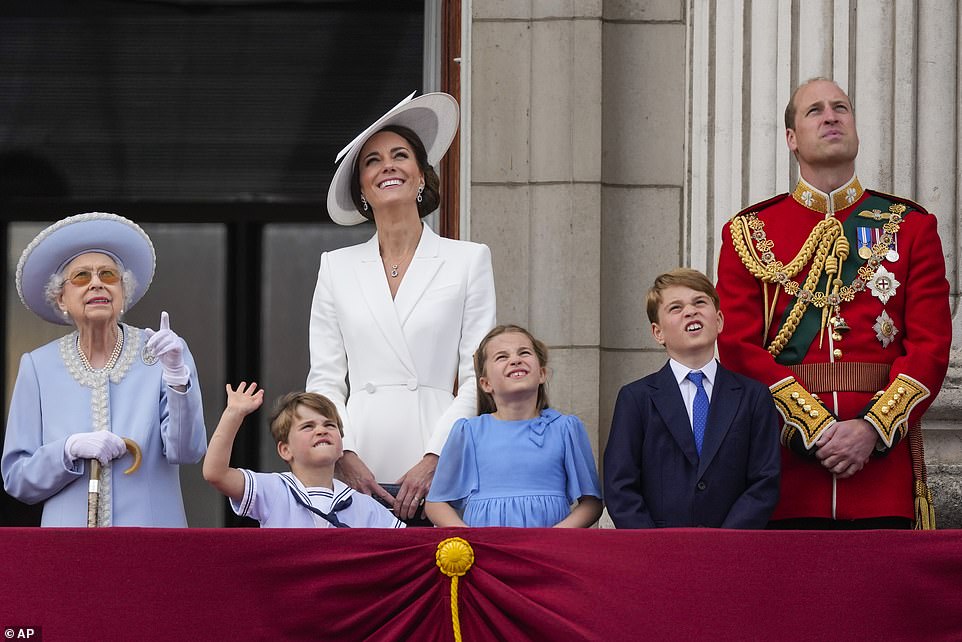 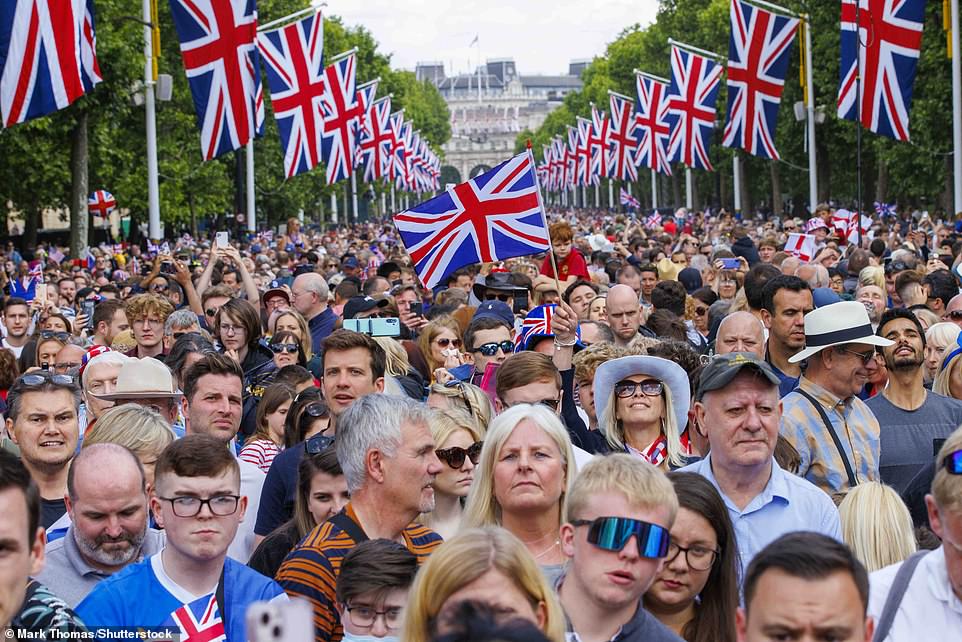 Missed out: Thousands of royal fans were seen paying tribute to Her Majesty on The Mall on Thursday and now it seems they got closer to the palace than Kim will after her rejection

The reality star and her comedian beau landed in the UK in recent days and went jewellery shopping in London’s Mayfair on Tuesday.

Kim was then seen browsing various items on display and appeared to be referring back to her phone as she was helped by a shop assistant.

Kim flaunted her incredible curves and famous derriere in clinging metallic gold leggings and stilettos, which she teamed with a cream Balenciaga zip-up hoody.

The couple also enjoyed a typically low-key date night at the River Café in London after touching down in the UK. 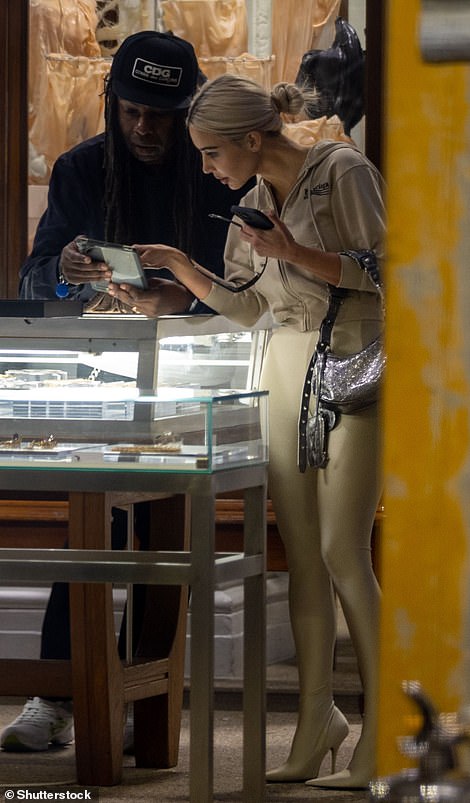 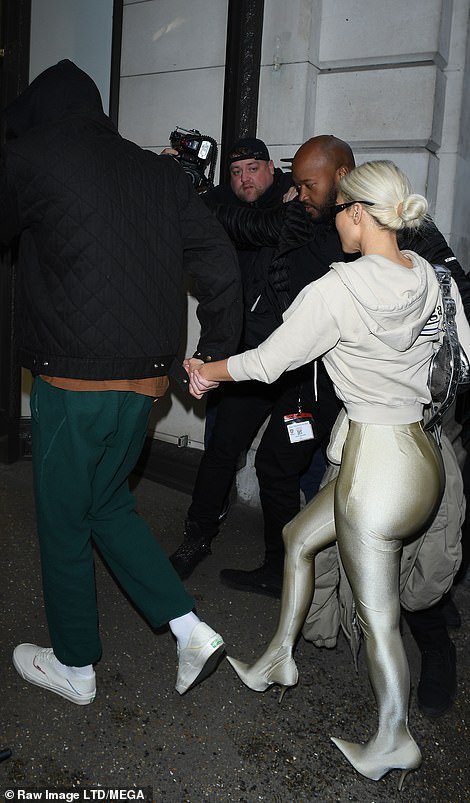 Glitzy: The reality star and her comedian beau landed in the UK in recent days and went jewellery shopping in London’s Mayfair on Tuesday 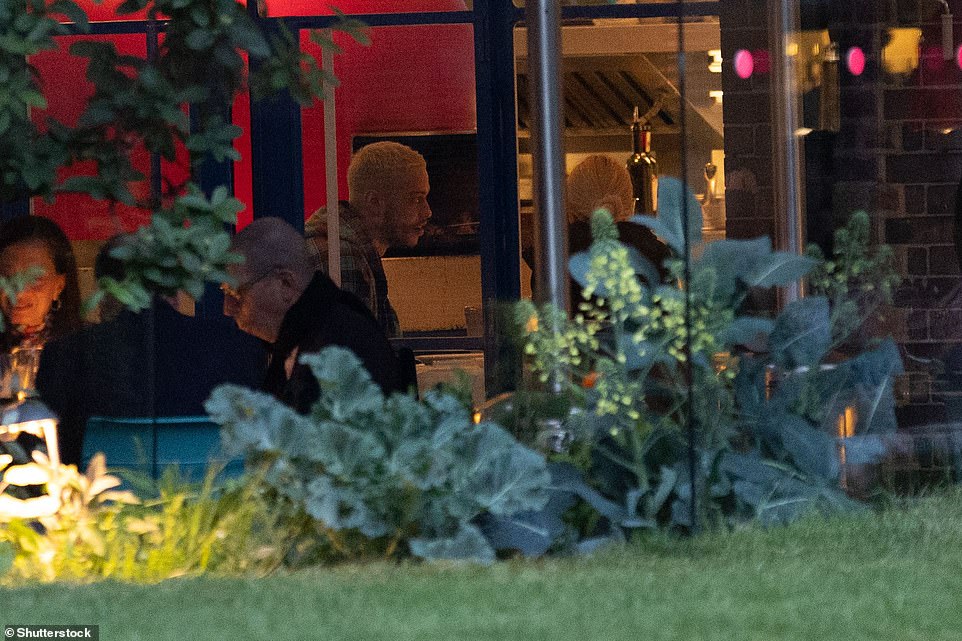 Dinner date: On Monday the Kardashians star and the former SNL funny man were pictured on a typically low-key date night at the River Café in London

On Thursday night, the Queen symbolically led the lighting of a series of beacons across the United Kingdom in a spectacular end to the first day of historic national commemorations celebrating her 70-year-reign.

The monarch’s late-night appearance at Windsor Castle rounded off the start to joyful festivities which earlier in the day saw the Queen take to the Buckingham Palace balcony surrounded by her family.

But it was also announced the head of state would miss a national service of thanksgiving at St Paul’s Cathedral in London on Friday after experiencing ‘discomfort’ during Thursday’s events.

In a statement, Buckingham Palace said the Queen ‘greatly enjoyed’ her Trooping birthday parade, but taking into account the journey and activity required to participate, she had reluctantly decided not to attend the service the next day. 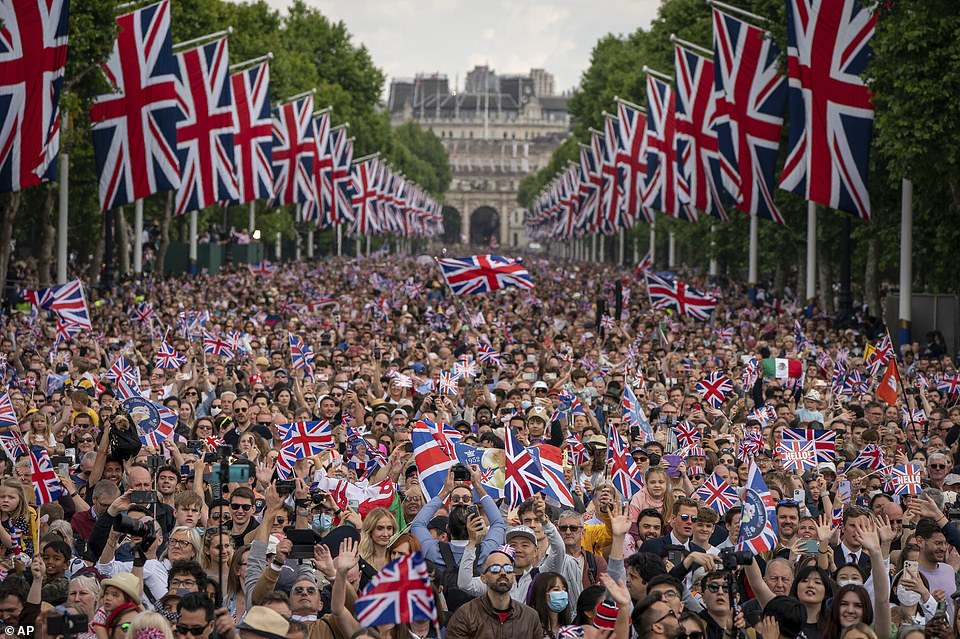 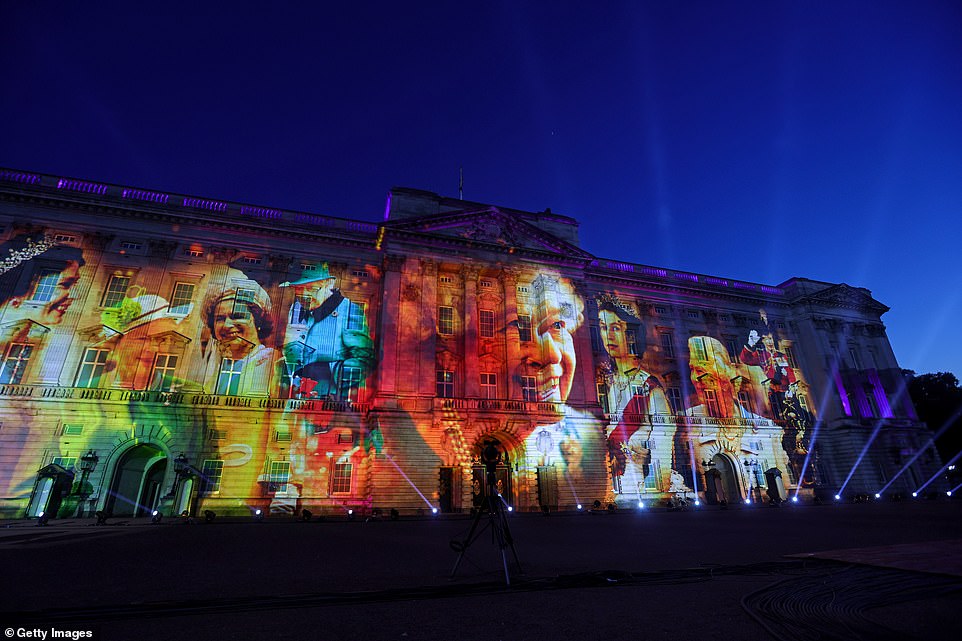 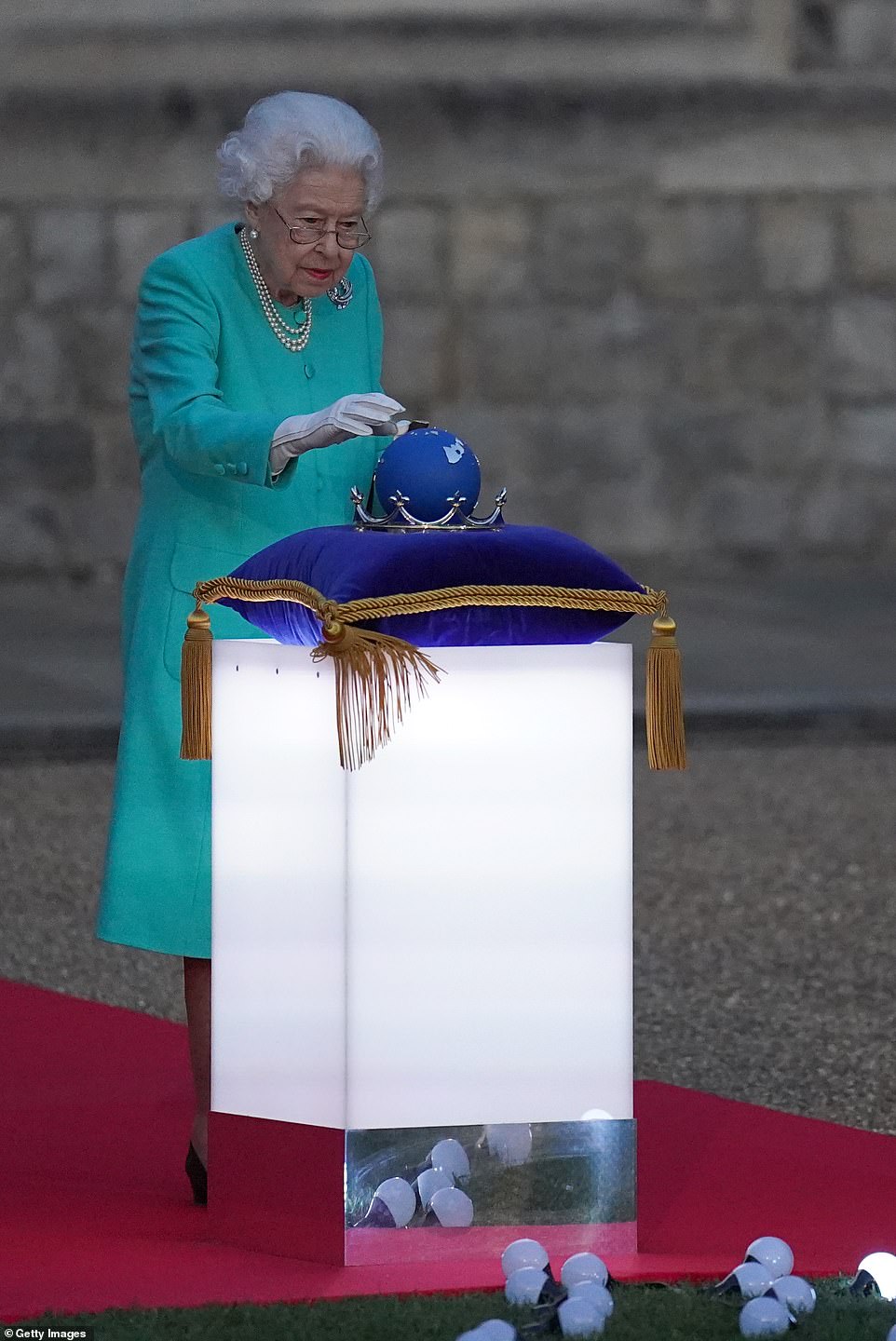 The Queen approaches the Commonwealth Nations Globe to start the lighting ceremony at Windsor Castle this evening, despite admitting difficulties earlier today 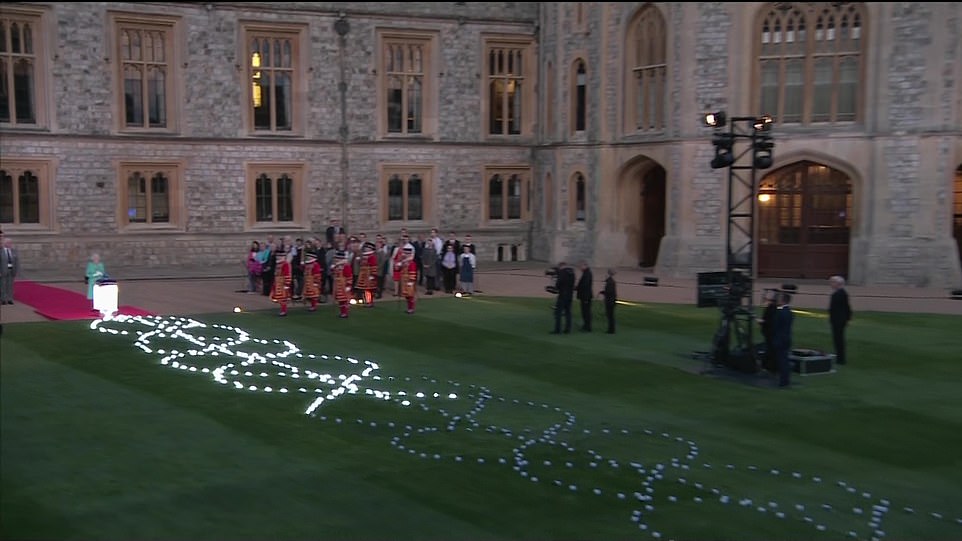 As the sovereign placed her finger on the globe, bright white lights raced along the Quadrangle towards Windsor’s famous Round Tower 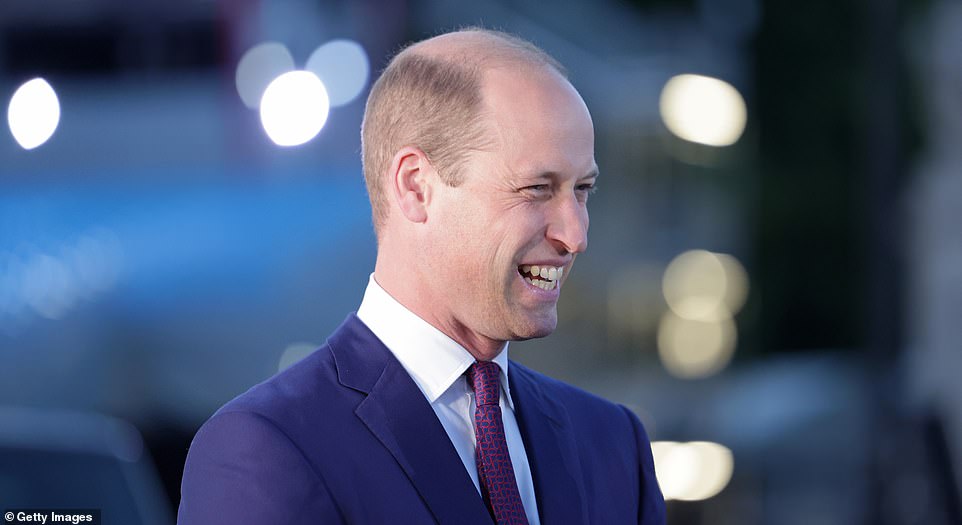 Hours later, she rallied as planned to take part in a special dual beacon-lighting ceremony with the Duke of Cambridge.

William watched his grandmother on a large screen in front of Buckingham Palace, while the Queen triggered the lighting of the principal beacon – a 69ft tall Tree of Trees sculpture outside her London residence – from Windsor.

The Queen touched the Commonwealth of Nations Globe to start the lighting of the main beacon 22 miles away.

The palace beacon was one of more than 3,500 around the UK and the Commonwealth, including the Tower of London, Windsor Great Park, Hillsborough Castle, the Queen’s estates of Sandringham and Balmoral, and on top of the UK’s four highest peaks.

Flaming tributes were lit at towns and cities across Northern Ireland including at Titanic Belfast and St Columb’s Cathedral in Londonderry, while in Scotland, a beacon was set ablaze at Edinburgh Castle as a piper played. 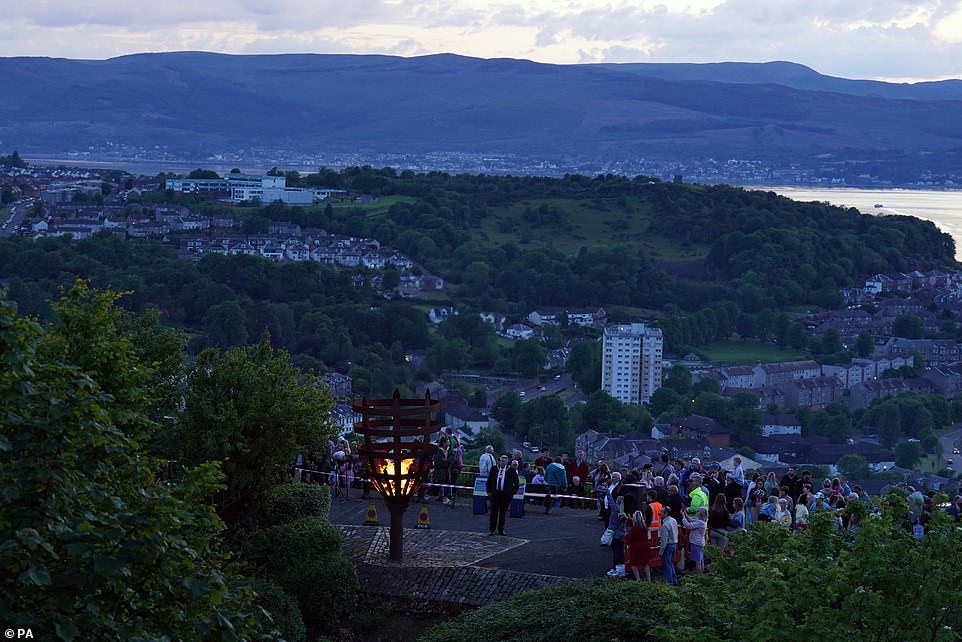 Over 3,000 towns, villages and cities throughout the UK, Channel Islands, Isle of Man and UK Overseas Territories, and each of the capital cities of Commonwealth countries are lighting beacons to celebrate the the Queen’s 70-year reign 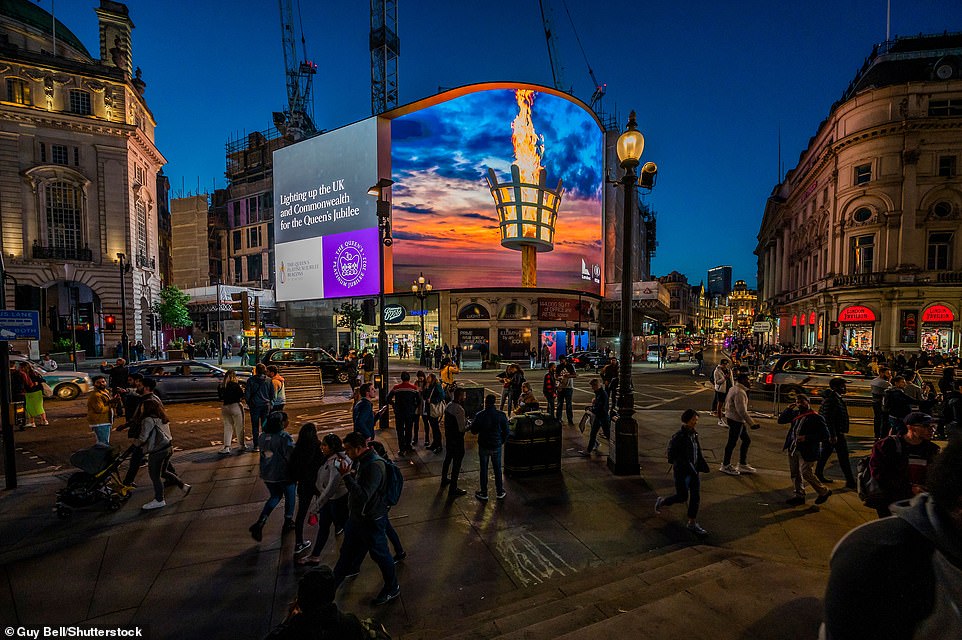 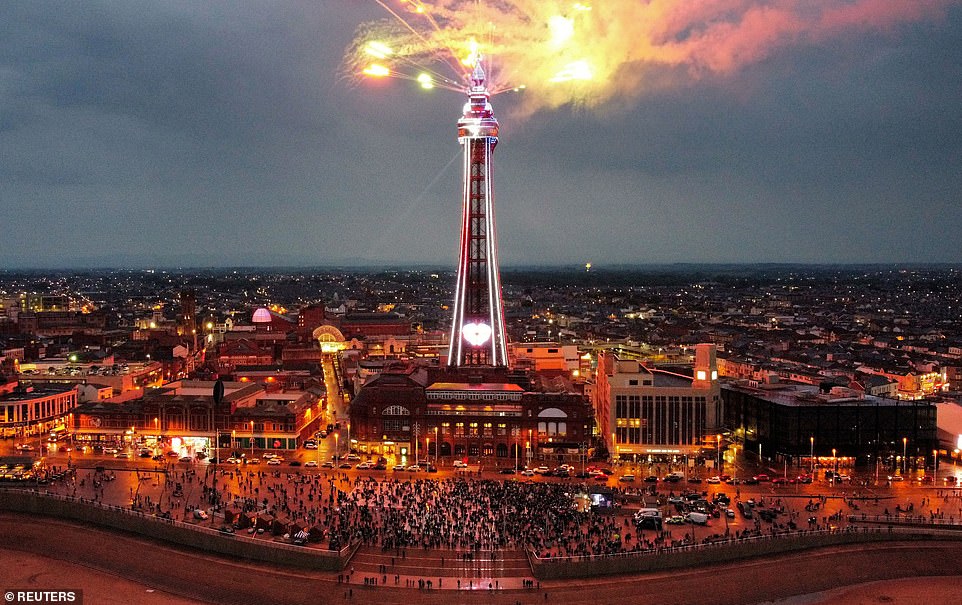 Earlier in the day cheeky Prince Louis stole the show on the palace’s famous frontage as he covered his ears with his hands and let out a howl of excitement as a flypast roared overhead.

The four-year-old stood next to the Queen, known affectionately as ‘Gan Gan’ to the Cambridge children, as she leaned down to talk to her great-grandson, pointing out things of interest

Thousands of well-wishers packed on to The Mall in the June spring sunshine, erupting in cheers for the nation’s longest reigning monarch, with the smiling Queen delighted at the patriotic scenes.

The Queen made two appearances on the palace balcony.

She joined her cousin the Duke of Kent to take a salute of her soldiers returning from Trooping the Colour, after the Prince of Wales stood in for his mother on the parade ground.

Then the Queen re-emerged, wearing sunglasses, to watch the six-minute flypast of more than 70 aircraft, including 15 RAF Typhoons in the formation of the number 70. 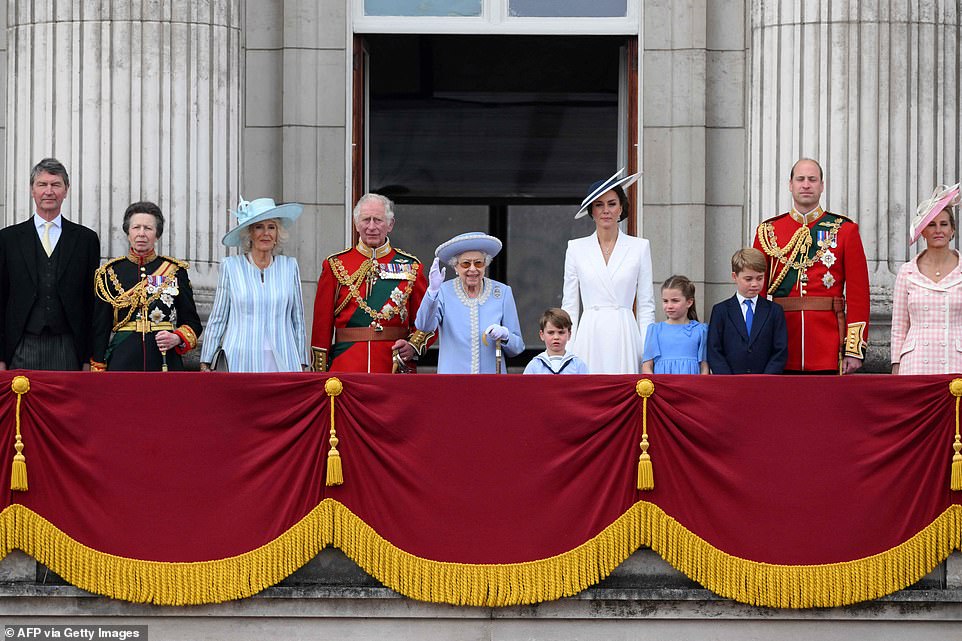 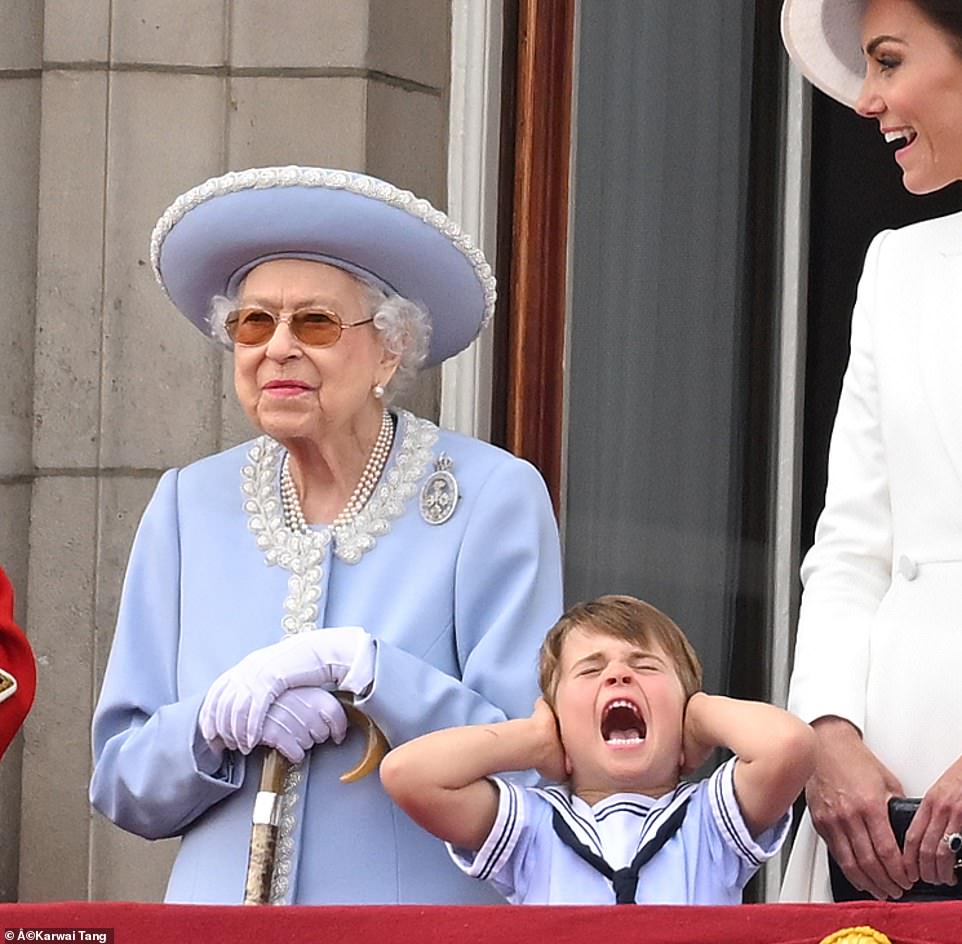 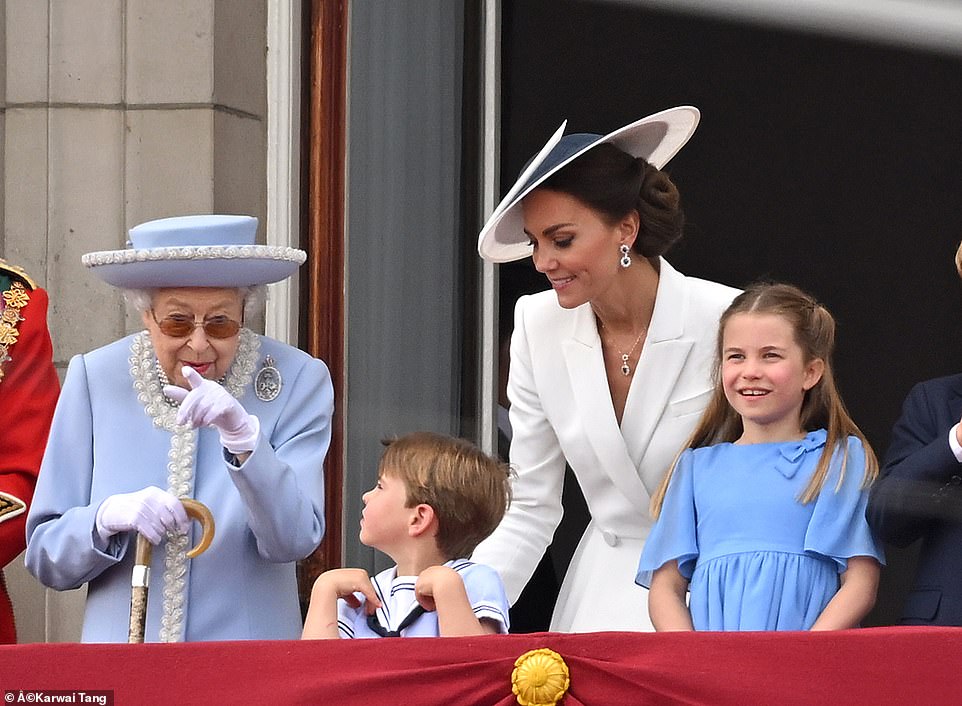 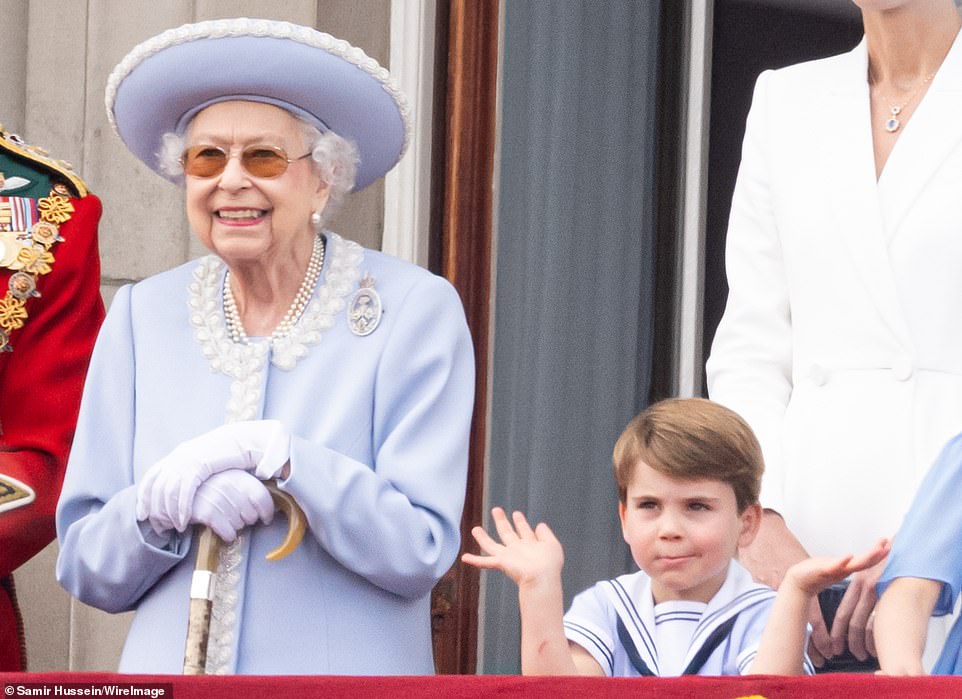 Queen Elizabeth II and Prince Louis of Cambridge during Trooping the Colour, in which little Louis stole the show 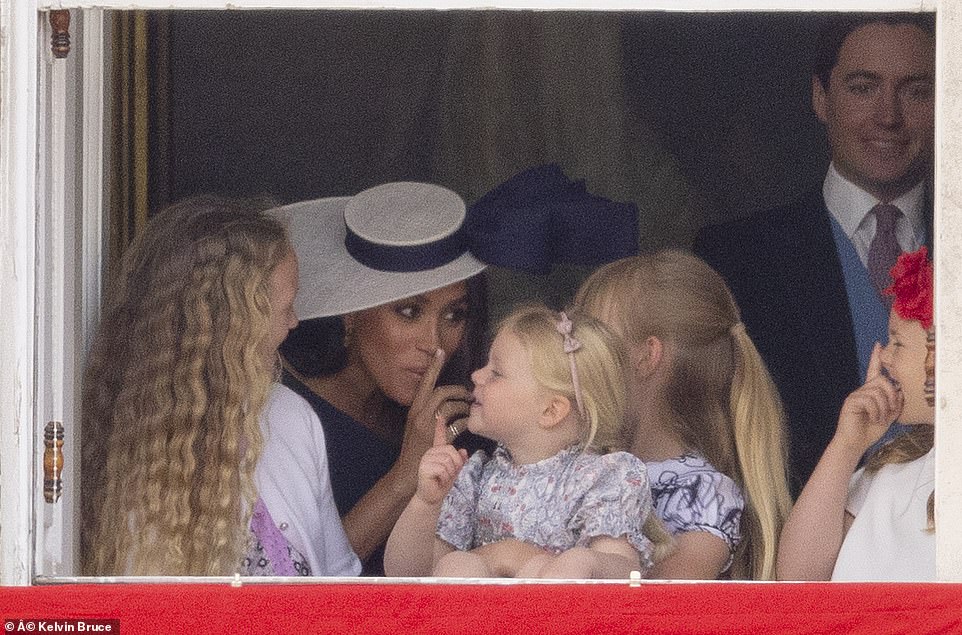 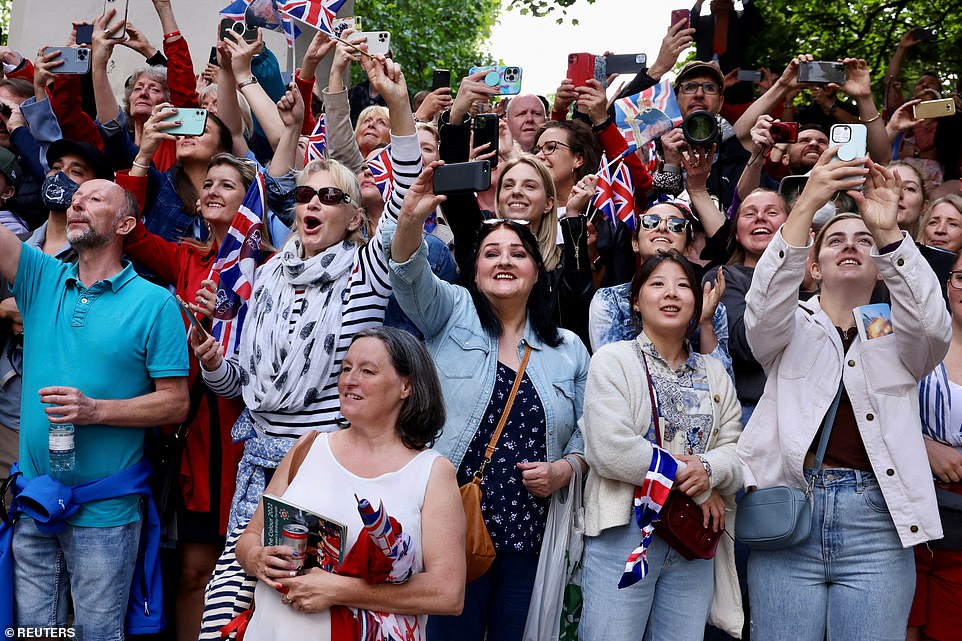 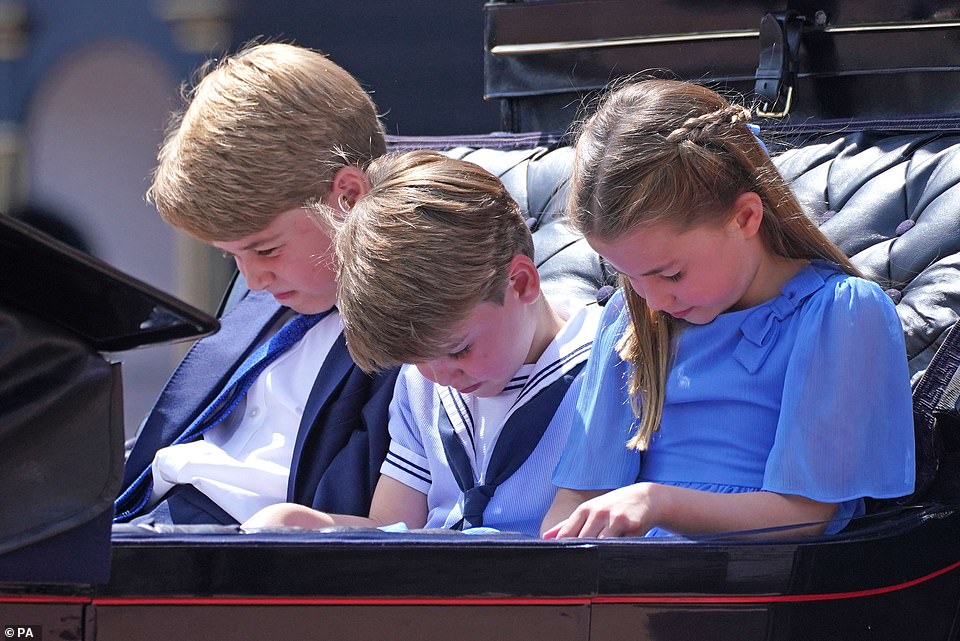 Prince George (left), Prince Louis and Princess Charlotte bow their heads as they receive a salute in London on Thursday 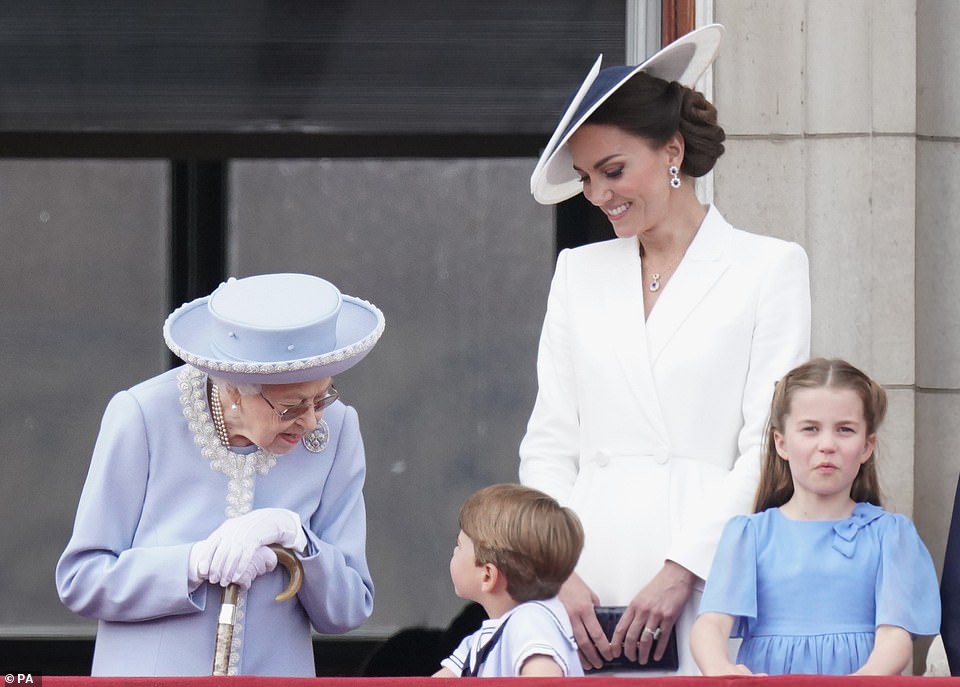 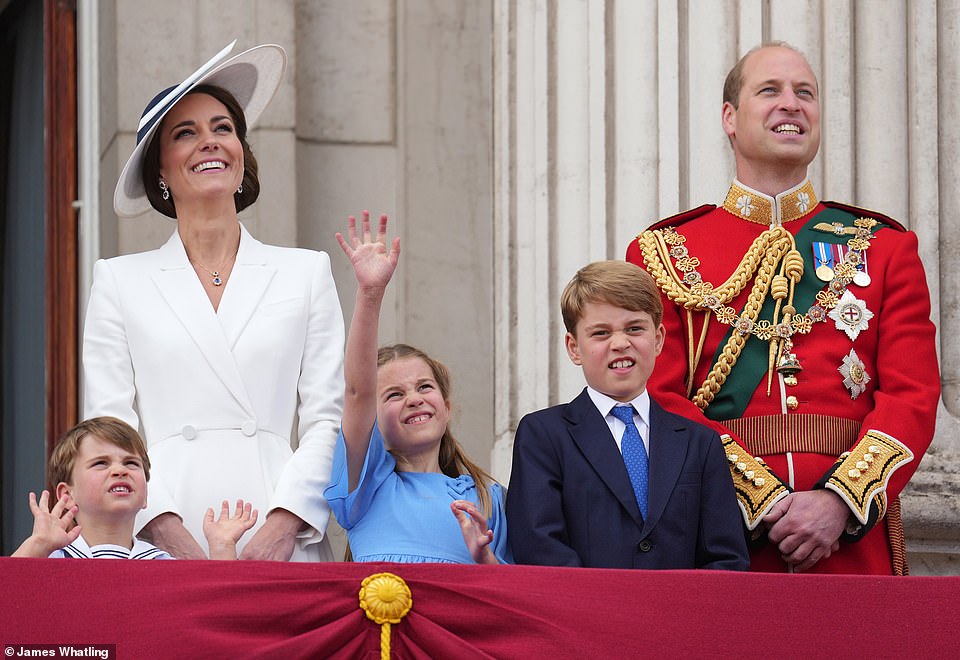 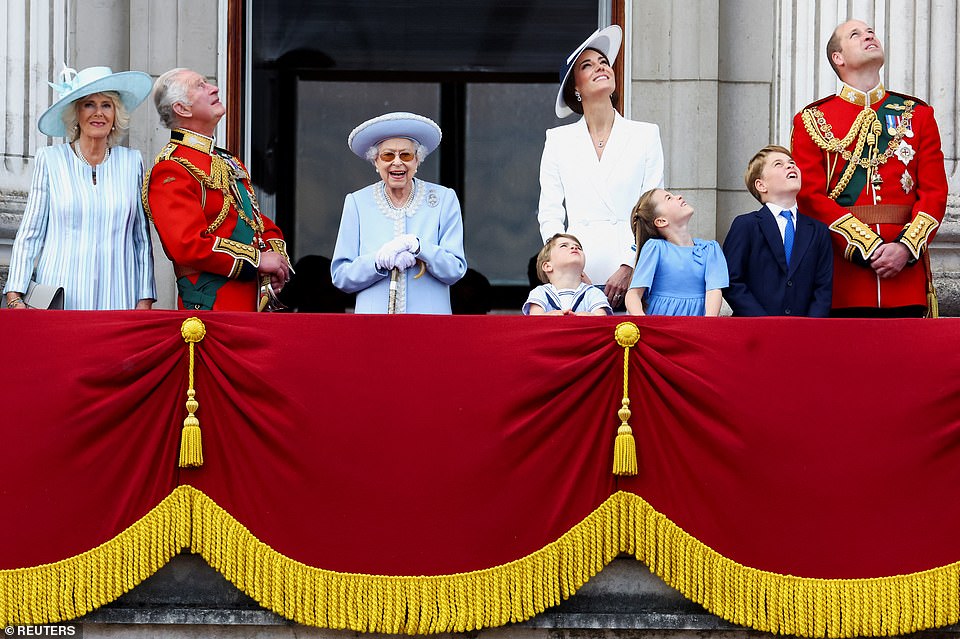 Camilla, Prince Charles, the Queen, Prince Louis, the Duchess of Cambridge, Princess Charlotte, Prince George and Prince William appear on the balcony of Buckingham Palace as part of the Trooping the Colour parade on Thursday 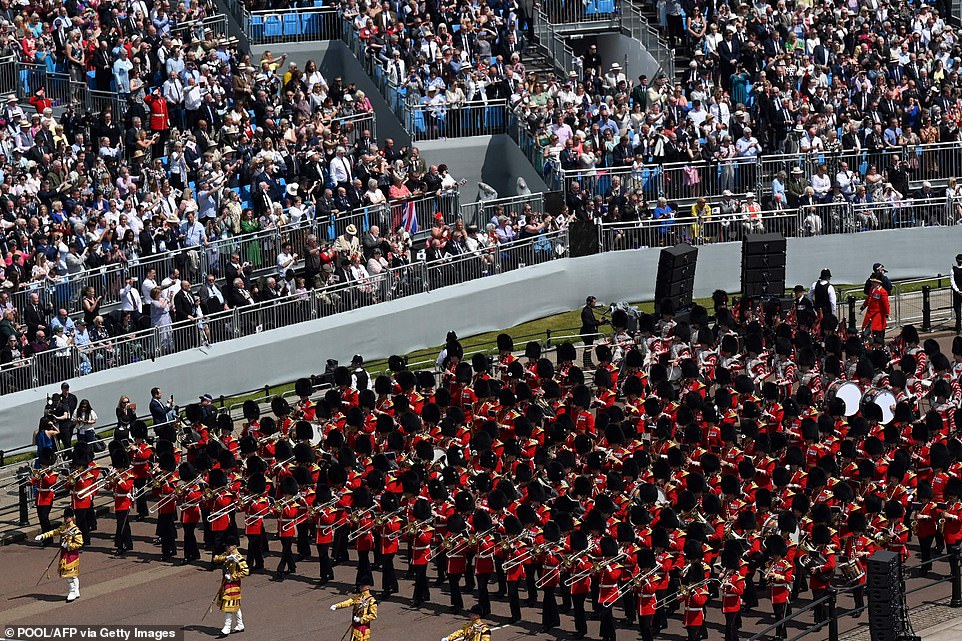 Dressed in a dusky dove blue Angela Kelly coat which she wore for her official Jubilee portrait, and matching hat, the Queen, who has mobility issues, was holding a walking stick and wearing the Guards’ Badge on her coat.

Eighteen royals including the head of state stepped out for the flypast, with Charles, the Duchess of Cornwall, the Duke and Duchess of Cambridge and their three children Prince George, Princess Charlotte and Louis flanking the monarch.

The crowds had been treated to the sight of the Cambridge youngsters waving in their first carriage procession, joined by proud parent Kate and their step-grandmother Camilla.

The Duke and Duchess of Sussex were among the guests who watched Trooping the Colour at Horse Guards from inside the Duke of Wellington’s former office, overlooking the parade ground.

They stayed out of the limelight and joined more than 30 royals including Camilla and Kate and the Queen’s extended family including all of her grandchildren.

But there was no place for the Prince Harry and Megan, the Sussexes, who caused a crisis by quitting as senior royals, or the Queen’s disgraced second son Prince Andrew, the Duke of York on the palace balcony.

The Queen decided to limit it to working members of the family, her Cambridge great-grandchildren and two youngest grandchildren.

As the four days of celebrations continue, Andrew is to also miss Friday’s service of thanksgiving at St Paul’s after catching Covid. 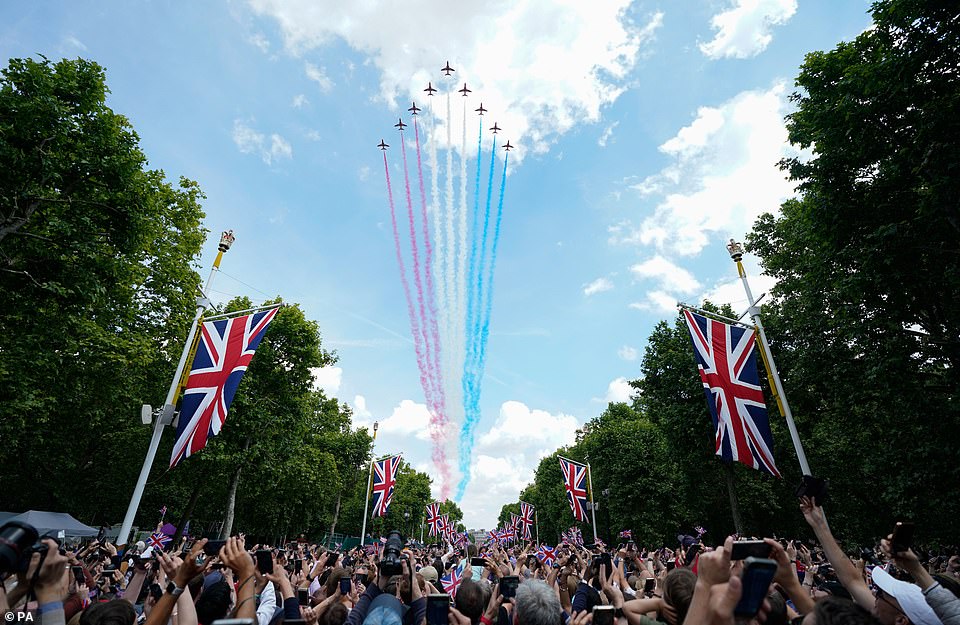 The Duchess of Sussex put on an animated display with Savannah Phillips (left), her sister Isla (behind) and Lena Tindall 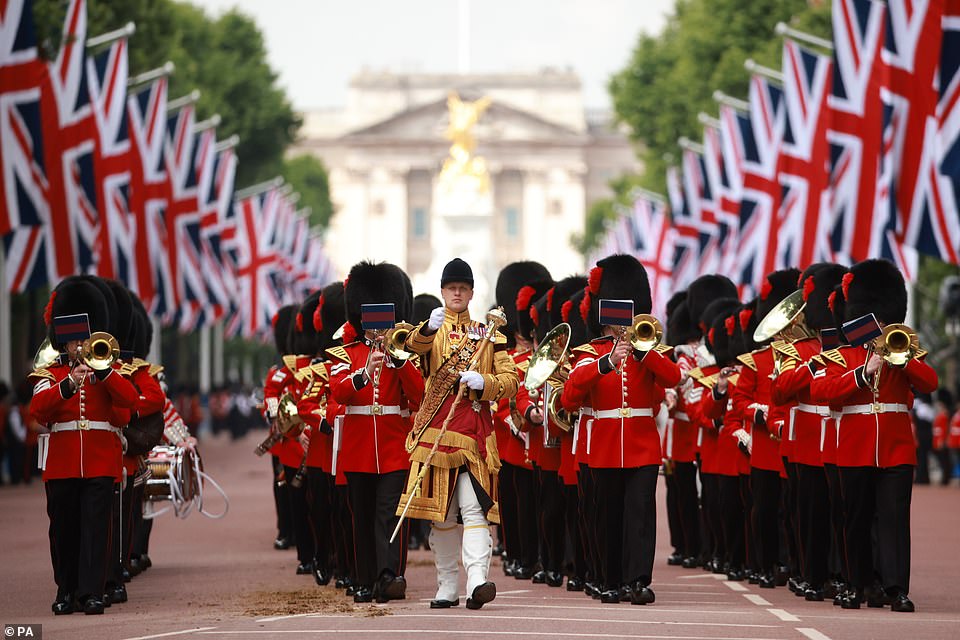 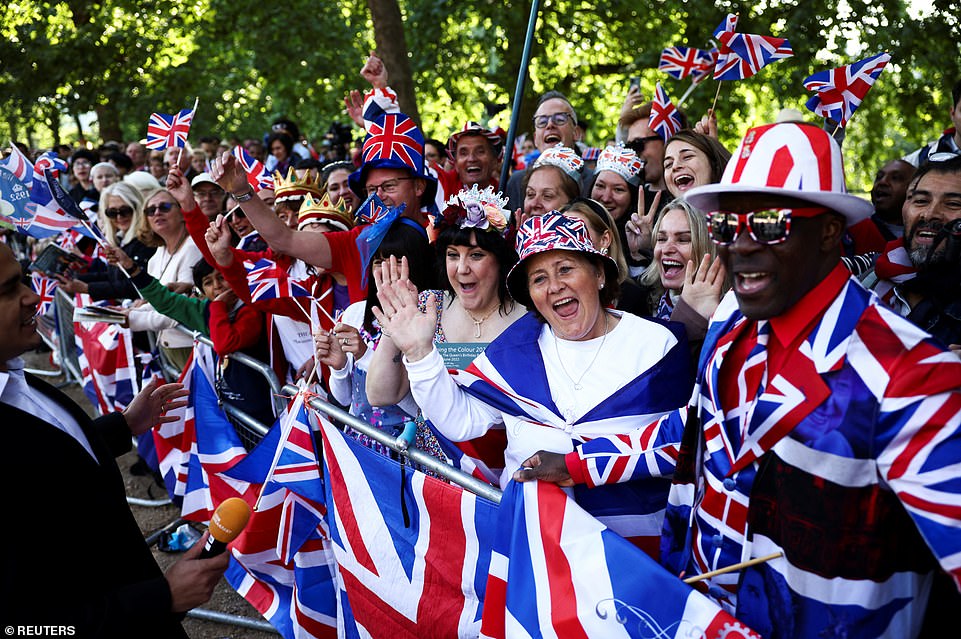