North Korean leader Kim Jong Un has ordered officials to provide food and shelter for hundreds of families who lost their homes in floods, the KCNA state news agency reported on Friday.

Heavy rain across the Korean peninsula has brought flooding to both North and South Korea in recent days, and concern is growing about damage to North Korean crops and its potential impact on food supplies.

KCNA claimed: ‘It is of priority importance to quickly supply sleeping materials, daily commodities, medicines and other necessities to the flood-affected people to stabilize their living.’ 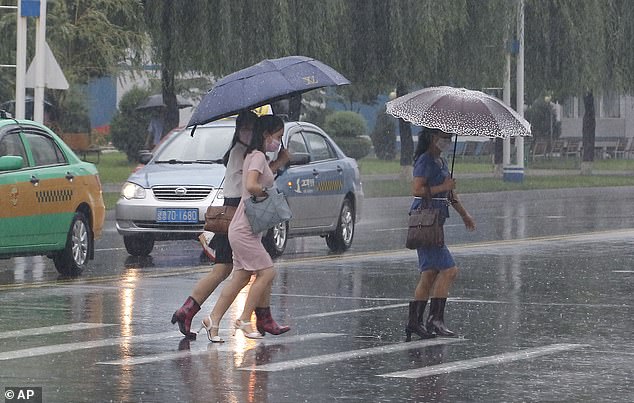 Inclement weather has affected the hermit state for several days leading to flooding (pictured, three women crossing a road in the capital Pyongyang 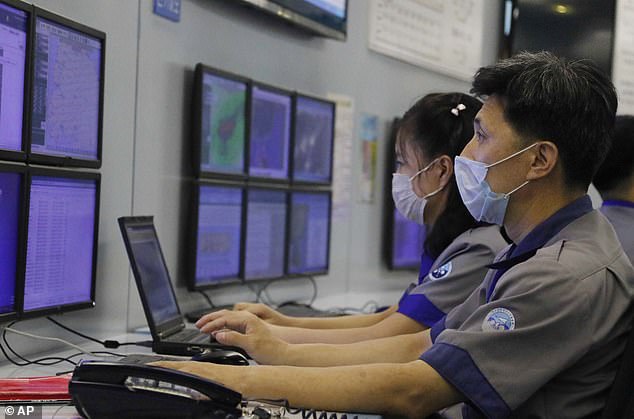 Officials from the state Hydro-meteorological administration, pictured, monitored the storms

Kim made the remarks while inspecting a flood-hit part of North Hwanghae Province, on the border of South Korea, as he ‘clarified tasks’ for recovery work with officials there.

Torrential rain for several days has inundated more than 730 single-story houses, destroying 179 of them, and flooded rice-growing land, KCNA said.

There were no reports of casualties.

State television footage showed Kim visiting rural areas where a flooded river devastated farmlands and the roofs of some houses had collapsed.

Kim would also mobilise the army for rehabilitation, in particular work on homes and roads, and he called on architects to build 800 model houses in a badly hit farming village in Unpha County, KCNA said.

The rain during the harvest season in the rice-growing area is raising concern about North Korea’s food security.

North Korea’s ruling party newspaper, Rodong Sinmun, cited a study that said rice and corn would suffer if the crops were under water for just two or three days. 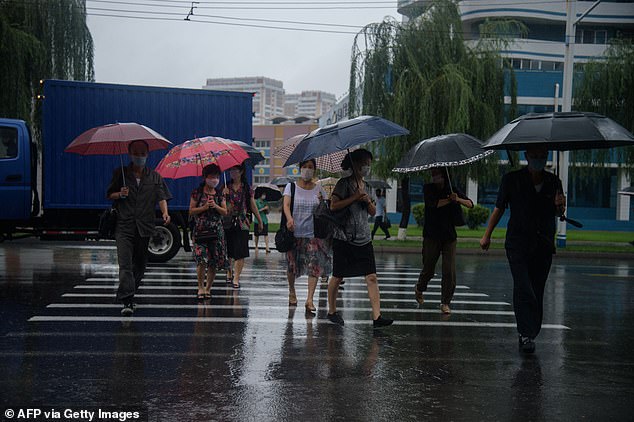 Officials fear that crops in the impoverished nation could be wiped out by the flooding, pictured, North Korea’s capital Pyongyang on August 5 during a torrential downpour

‘The fate of this year’s farming depends on how to protect farmland and crops from the flood,’ the newspaper said.

South Korea on Thursday donated $10 million to the U.N. World Food Programme (WFP) for its efforts to help North Korean children and women.

Parts of South Korea have seen more than 40 consecutive days of rain, the longest monsoon since 2013, and more is expected across the peninsula.