Kim Jong Un’s disappearance from public view suggests that he cannot stand up or walk by himself, a North Korean defector has said.

Thae Yong-ho told CNN that Kim’s ‘abnormal’ absence from a ruling party showpiece on April 15 signalled that the dictator must be physically impaired.

‘I’m not quite sure whether he really had some surgery or whatever, but one thing is clear… he cannot stand up by himself or walk properly,’ said Thae, a former North Korean diplomat who was elected to the South’s parliament earlier this month.

Seoul and Washington have played down rumours that Kim is gravely ill or dead, but Thae said only the supreme leader’s family and closest aides would know the truth.

North Korean leader Kim Jong-un – pictured sitting at a concert with his wife Ri Jol-su in January this year – could be unable to stand or walk, a defector has said 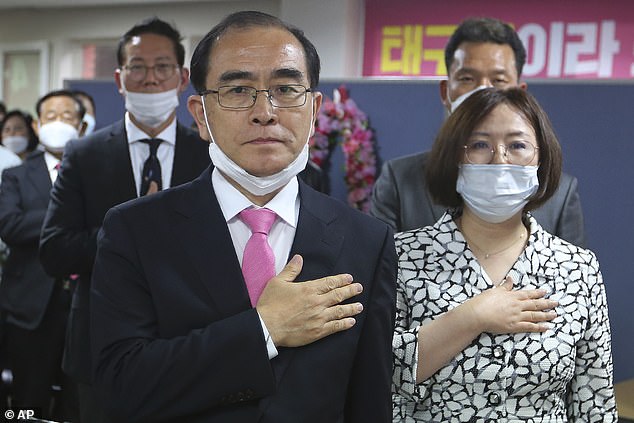 Kim was last seen in public on April 11, when he presided over a meeting of the ruling Workers’ Party in Pyongyang.

On April 15, he inexplicably missed a Day of the Sun celebration honouring his grandfather Kim Il-Sung, the founder of North Korea.

His unprecedented absence sparked a wave of speculation about his health, and he has not been seen in public since.

‘Kim Jong Un is not only the leader of North Korea, but he is the grandson of Kim Il Sung … to North Korean eyes it is really abnormal,’ said Thae.

Reports have claimed that Kim had heart surgery and is now seriously ill or even dead, but these claims are impossible to verify.

Seoul and Washington have both played down the rumours, indicating that they know Kim’s whereabouts without explaining further.

Still, experts say it is strange that North Korea would not release a picture of a healthy-looking Kim if there was no truth to the rumours.

Official media has not provided any concrete proof of life since April 11, beyond reports of messages sent in Kim’s name.

Thae warned that only a small handful of people including Kim’s wife Ri Jol-su and his sister Kim Yo-jong would know the full story.

He also cautioned that clues about Kim’s whereabouts – such as an apparent sighting of his personal train in the city of Wonsan – could be deliberate diversion tactics.

Pyongyang officials know that the train can be seen from satellites and have previously sent it around the country to confuse outsiders, Thae said. 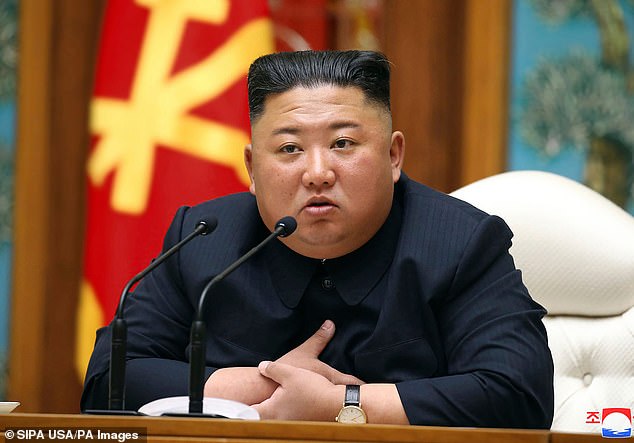 Kim Jong-un was last seen in public on April 11 at a meeting of the ruling Workers’ Party (pictured). His absence has prompted rumours about his health 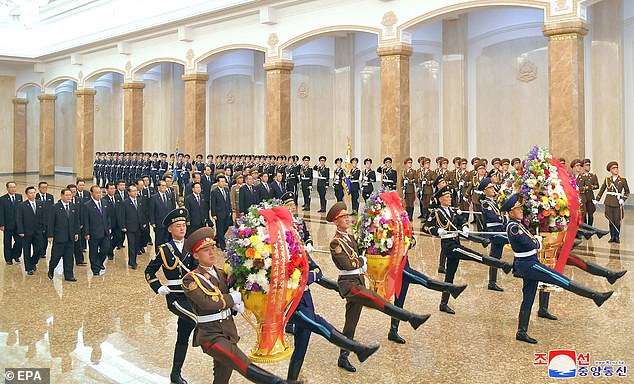 The South’s minister for North Korean affairs said yesterday that Kim may be out of sight because he is trying to avoid coronavirus and not because he is gravely ill.

‘It is true that he had never missed the anniversary for Kim Il Sung´s birthday since he took power, but many anniversary events including celebrations and a banquet had been cancelled because of coronavirus concerns,’ he said.

He said there were at least two instances since mid-January where Kim Jong Un was out of sight for nearly 20 days.

North Korea claims it has no coronavirus cases, but has cancelled some large events and imposed quarantine measures to head off an outbreak.

If Kim is hiding from the virus, it would ‘puncture a hole in the state media narrative of how this crisis has been perfectly managed’, said Chad O’Carroll of monitoring group Korea Risk Group.

‘If he is merely trying to avoid infection, it should theoretically be very easy to release photos or videos of a healthy-looking Kim,’ he said.

According to the Washington Post, the rumours over Kim’s health have sparked panic buying in Pyongyang.

People have stocked up on rice, liquor, cigarettes, canned fish and electronics while helicopters have been flying low over the city, it is reported.

Speculation over Kim’s health has become so stark that the US is scrambling five spy planes to monitor movements in North Korea, reports in the South say.

South Korea has also deployed a spy aircraft over its northern neighbour, the Chosun Ilbo newspaper reported, despite Seoul’s insistence that Kim is alive and well. 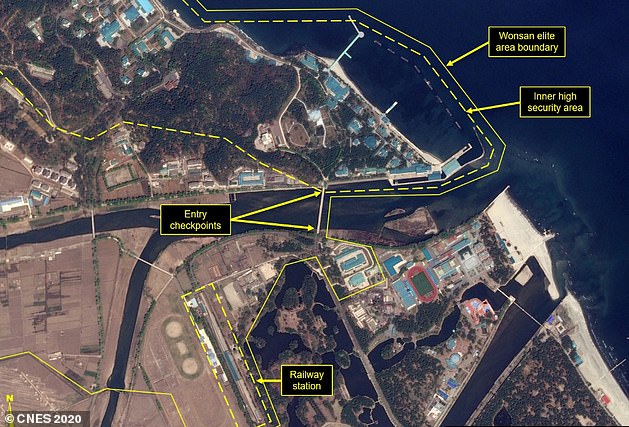 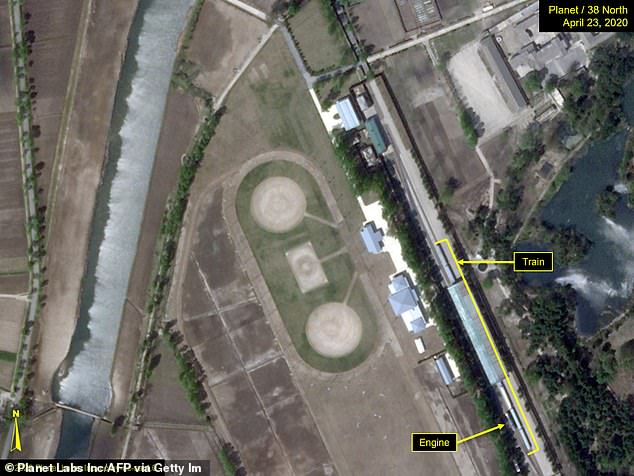 Satellite images of Wonsan Elite railway station show the leader’s train arriving after April 15, and was still at the station on April 23

A source familiar with US intelligence reporting said it was entirely possible Kim had disappeared from public view to avoid exposure to avoid Covid-19.

The sighting of his presidential train in the coastal resort area of Wonsan could suggest he may be there or have been there recently.

But the source said that US agencies were also still considering the possibility Kim might be ill, even seriously.

While North Korean state media outlets have not reported on Kim’s whereabouts since April 11, they have carried near-daily reports of him sending letters and diplomatic messages.

That suggests that he is still carrying out his duties, the South Korean minister said, although some experts say they are not necessarily conclusive.

The letters apparently sent in his name include a message of gratitude to workers in a tourist zone and a letter to South African president Cyril Ramaphosa.

‘I agree with the South Korean government’s assessment that there is no reason to think Kim Jong Un is not performing his duties,’ said Rachel Minyoung Lee, a former North Korea intelligence analyst for the US government.

‘That said, I would not read too much into letters signed by Kim Jong Un. I would guess that most of them are not written by him anyway.’

US President Donald Trump said on Monday he has a good idea how Kim Jong Un is doing and hopes he is fine, but would not elaborate.

Japanese prime minister Shinzo Abe said he was aware of reports on Kim’s health and he was was paying close attention to developments. 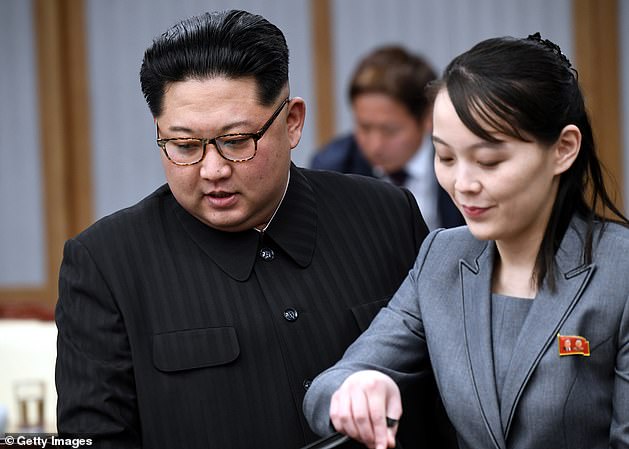 North Korea has never announced who would succeed Kim Jong Un in the event he is incapacitated, and with no details known about his young children, it has been suggested that his sister Kim Yo Jong (right) could be in line to take over 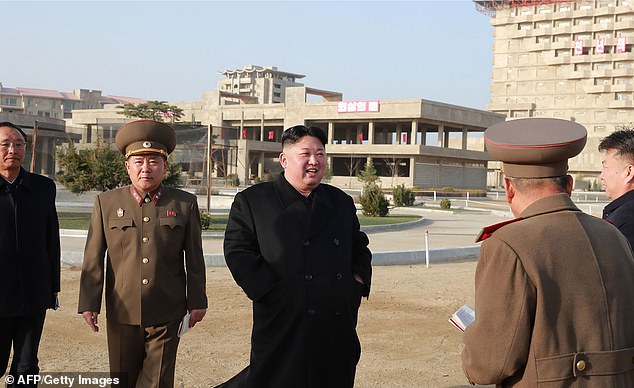 Kim Jong-un sent a personal letter to workers on a project in the city of Wonsan (where he is pictured in April 2019), according to a state newspaper