Two British killer whales which appeared off Cornwall’s coast were the most southerly ever recorded in half a century, experts have confirmed.

Orcas John Coe and Aquarius were spotted at Porthgwarra near Land’s End at the tip of Cornwall earlier this month.

Charities including The Sea Watch Foundation, Hebridean Whale and Dolphin Trust and the Irish Whale and Dolphin Group have confirmed this as the most southerly point they have ever been recorded in the five decades their movements have been tracked.

It was also the first sighting of this famous pair of killer whales off England’s coast, as they are usually found around west Scotland.

Within a matter of days however the pair had swam back to the Hebrides, and were spotted by Anthony Rigell from Waternish Point on the Isle of Skye on May 14, around 550 miles north of Porthgwarra.

Two British killer whales which appeared off Cornwall’s coast were the most southerly ever recorded in half a century, experts have confirmed. Pictured: An orca named Aquarius spotted at Porthgwarra near Land’s End on May 5

Then on May 17 they were spotted off Lochboisdale, South Uist from the Hebridean Whale and Dolphin Trust’s research vessel Silurian.

The whales are a West Coast community with sightings recorded largely along the west coasts of Scotland and Wales and all around Ireland.

Most sightings have been recorded in the Hebrides off the Scottish west coast, although John Coe has also occasionally been seen even off the north-east coast of Scotland.

The previous confirmed sighting of the pair was reported off Skye in the Inner Hebrides in October 2020, whilst in Ireland, John Coe was last seen off the coast of Co Donegal in August 2020.

The lockdown during the winter months has meant that fewer people than normal were out at sea and around our coasts and as a result the charities have received a smaller number of sightings from the public than normal in the last 18 months. 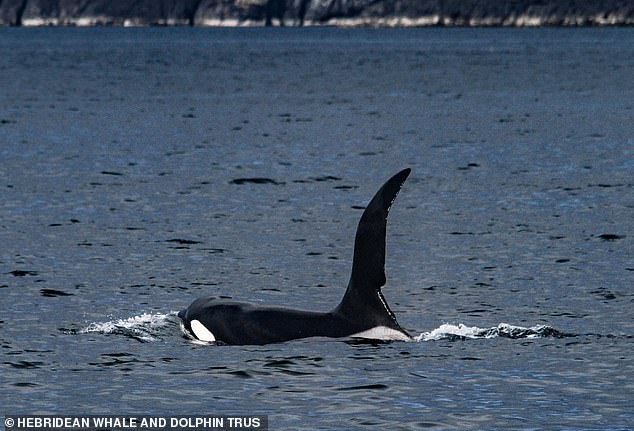 Whale observation groups confirmed this as the most southerly point they have ever been recorded in the five decades their movements have been tracked. It was also the first sighting of this famous pair of killer whales off England’s coast, as they are usually found around west Scotland. Pictured: John Coe sighted back in Scotland

Dr Lauren Hartny-Mills, Science and Conservation Manager at the Hebridean Whale and Dolphin Trust, monitors sightings of the group off the west coast of Scotland: ‘We are all absolutely thrilled that John Coe and Aquarius have been seen again.

‘The recent sighting off Cornwall really highlights how crucial public sightings data are in helping us monitor the movements of individual animal’s year after year.

‘It shows how much we still have to learn about their movement and it is fascinating to be able to add another important piece to the puzzle.

‘Most of what we know about animals like John Coe and Aquarius is thanks to dedicated members of the public who send in their sightings and photographs of whales and dolphins to citizen science sightings schemes run by regional charities like Whale Track by Hebridean Whale and Dolphin Trust.’

John Coe is one of the most distinctive killer whales seen around the British Isles with a deep nick near the base of his dorsal fin and fluke.

‘Many people ask how John Coe got his name,’ said Dr Peter Evans, Director of Sea Watch Foundation who has been tracking sightings of killer whales around the British Isles since the 1970s.

‘It is the name of a character in a book called Mile Zero by Thomas Sanchez about a freed slave who became a student of the sea. 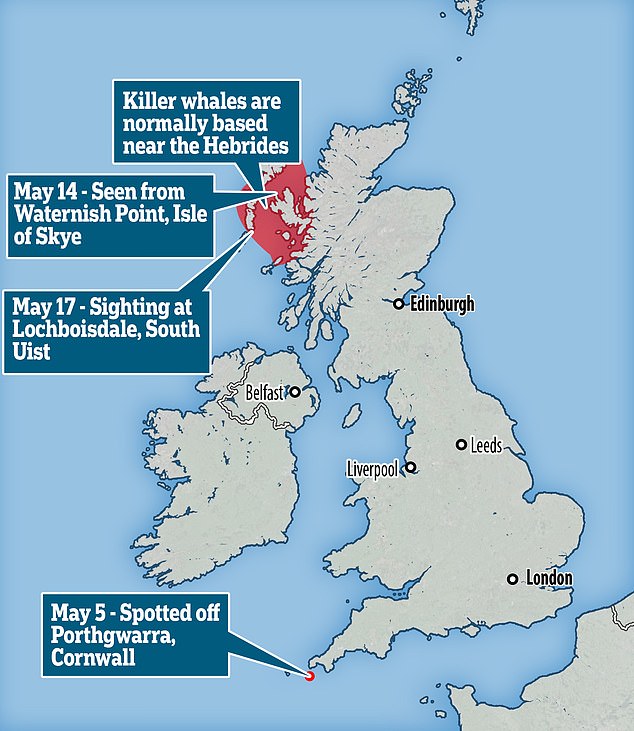 ‘It seemed a fitting name for this great wanderer of the ocean who must know the waters around Britain and Ireland better than most.’

During the 1980s, John Coe was spotted within groups that numbered up to twenty individuals but numbers have dwindled.

In the 1990s the largest group in which John Coe was seen was fourteen and in the subsequent decades this declined further going from ten down to eight in recent years following the death of two of the individuals.

Since 2016, these two individual males John Coe and Aquarius have not been seen with any other killer whales and no calves have been recorded since monitoring began.

Killer whales continue to be threatened in particular from pollutants.

Tragically, this unique group of killer whales may well die out in our lifetime.

These are not the only killer whales seen in British and Irish waters though and sightings of other groups and individuals have been recorded in English waters.

A number of groups of killer whales are frequently seen in Scottish waters as depicted in the recently published Scottish Killer Whale Photo identification Catalogue 2021.

Dr Peter Evans said: ‘In an average year, around 50% of Irish killer whale sightings are confirmed by IWDG to be of John Coe and others from this remnant group.

‘Seeing this apex predator in local waters is always special, but encounters with the West Coast Community Group stand out because of their long history around these isles.

‘John Coe is a symbol of both the Oceans’ power and fragility, and their declining numbers reminds us that we need to do much more to protect our marine ecosystems.’

‘Together we make a plea for members of the public to send us photographs of any killer whales they see around Britain and Ireland so we can continue to track individuals.

‘If you have seen John Coe or any other orcas around Britain and Ireland, do let us know.

‘The three organisations work closely together to study and conserve all cetacean species in the region in collaboration with citizen scientists everywhere.’

With marine mammals at risk from human activities including climate change, entanglement, pollution, underwater noise and habitat degradation, ongoing and long-term research is crucial to improve understanding of the impacts on cetaceans, and how to protect them.

Killer whales can be seen over a wide area of British and Irish waters but mainly in the north and west.