An orca named Tahlequah that touched the hearts of people around the world in 2018 after she carried her dead calf for 17 days has given birth to a new baby.

The 21 year-old orca — or ‘killer whale’ — gave birth on September 4 to her new calf, dubbed ‘J57’ by researchers, in the eastern Strait of Juan de Fuca in US waters.

According to the Whale Research Center, Tahlequah and her new calf appear to be healthy with the infant ‘swimming vigorously alongside its mother’.

Tahlequah gave birth to one calf in 2010 that survives to this day — ‘J47’, also known as ‘Notch’ — but she also miscarried a calf in mid-2010 before losing the 2018 calf soon after birth. Experts feared she was likely also lose this new one.

Her pregnancy was first reported by whale watchers in July after experts from the Sealife Response, Rehabilitation and Research conservation group spotted that she was larger than usual.

‘We hope folks on the water can give the Southern Residents plenty of space to forage at this important time. With such a small population every successful birth is hugely important for recovery,’ the nonprofit group wrote at the time.

So it came as a relief to experts when J57, yet to be given a common name by the research team, was born between Washington State and Vancouver Island. 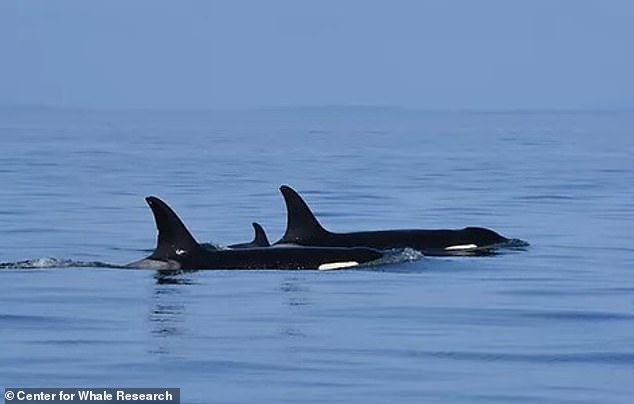 According to the Whale Research Center, Tahlequah and her new calf appear to be healthy with the infant ‘swimming vigorously alongside its mother’ 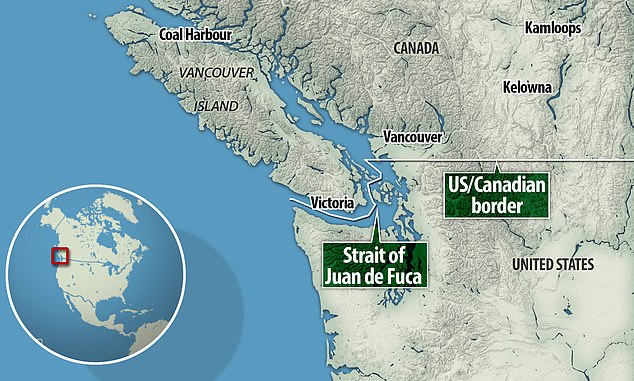 The 21 year-old orca — or ‘killer whale’ — gave birth on September 4 to her new calf, dubbed ‘J57’ by researchers, in the eastern Strait of Juan de Fuca in US waters.

‘Hooray! Her new calf appeared healthy and precocious, swimming vigorously alongside its mother in its second day of free-swimming life,’ researchers said.

The centre did not release the gender of the new calf as they cut observations short.

It said that when Tahlequah was spotted she was mostly separate from the other whales and ‘very evasive’ as she crossed the border into Canada.

‘So we ended our encounter with her after a few minutes and wished them well on their way,’ the centre said. ‘We hope this calf is a success story.’

Researchers can’t say exactly when the calf was born, but have set its birth date as September 4 due to the fact its dorsal fin was upright when they spotted it.

‘We know that it takes a day or two to straighten after being bent over in the womb, so we assign its birthday as September 4, 2020,’ the team explained. 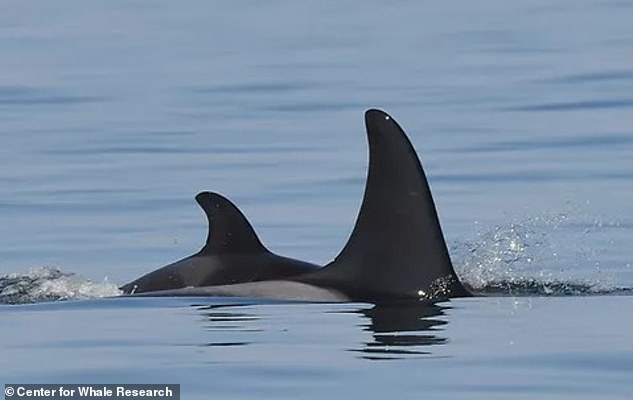 Her pregnancy was first reported by whale watchers in July after experts from the Sealife Response, Rehabilitation and Research conservation group spotted that she was larger than usual

Tahlequah shot to worldwide fame in 2018 when she carried her stillborn calf for 17 days – and over 1,000 miles – through the Salish Sea off Washington State.

WHAT ARE THE MAIN THREATS TO THESE KILLER WHALES?

According to the NOAA, the Southern Resident Killer Whales are up against three main threats:

Chinook salmon are the most nutrient-rich prey available for Southern Resident killer whales.

But, the salmon’s population has plummeted in recent years, spelling disaster for the whales that rely on them.

Noise and overcrowding from boat traffic is considered to be one of the top threats to their existence, along with modern pollution and contaminants lingering in the water from chemicals banned decades ago

According to the NOAA, the main contaminants of concern are: PCBs (found in plastics, paints, rubber, electrical equipment), DDT (found in pesticides), and PBDEs (fire retardant chemicals found, for example, in mattresses, TVs, toasters).

It was seen as a form of grief in another species and so her story captivated the media and the general public, drawing attention to the plight of Pacific orcas.

The use of remote-controlled drone surveillance from 100 feet up the air has allowed the researchers to assess the body conditions of the whales non-invasively.

Unfortunately, the southern resident whales in the Pacific — of which there are currently only 72 — are endangered, meaning that new births are vital.

According to experts, a lack of salmon — and resulting stress from hunger — has been linked to the southern resident whale’s poor reproductive circumstances.

They are also threatened by pollution and underwater noise — with the latter disrupting the orca’s sound-based hunting ability.

The researchers are concerned that a number of the juveniles in the three pods are looking thin — including Tahlequah’s living calf, J47.

‘There are stressed whales out there, critically stressed,’ Dr Fearnbach told the Seattle Times, adding that the drone study has shown the whales to be spread out in small groups.

This, she explained, is a sign that they are working hard to find food — and spending correspondingly less time socialising.

Both the researchers said that while conducting their field studies this year they observed a considerable amount of boat traffic in the area that the whales frequent — much of it travelling far too fast, which also creates more underwater noise. 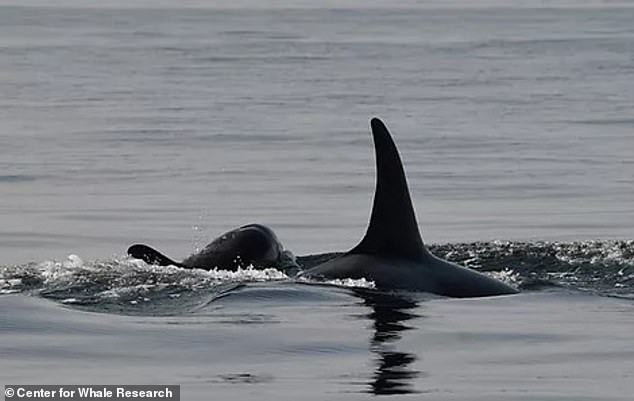 Dubbed Tahlequah, or J35, the around 21-year-old orca — or ‘killer whale’ — touched hearts around the world when news of her grieving process spread. Tahlequah carried her dead calf with her, balanced on her forehead, for 17 days before letting it go 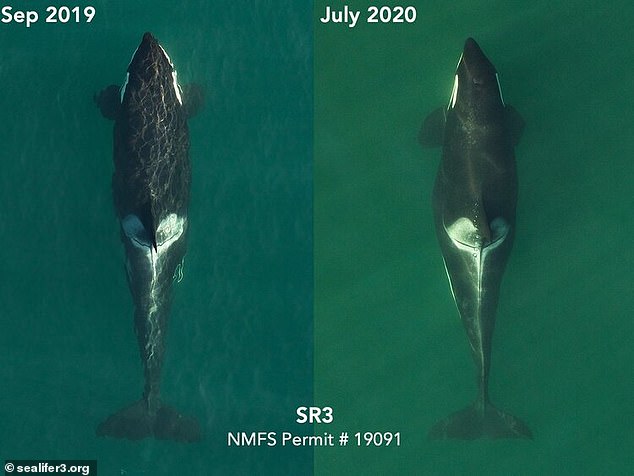 ‘People need to appreciate these are special whales in a special place at a vulnerable time,’ Dr Durban told the Seattle Times, adding that boats should give the animals the space and the quiet that they need to survive.

He concluded: ‘These whales deserve a chance.’

With the whales having so much nutritional stress in recent years, a large percentage of pregnancies fail, and there is about a 40 per cent mortality for young calves.​

‘With this new calf in J pod, that we designate as J57, the population now numbers 73, although the official number for July 1 is estimated to be 72,’ the team said.

‘We have to sort through all of the photos to see which whales were alive yesterday, and it follows that they would have been alive on July 1.

‘The July census is used for consistency in comparison with the Northern Resident killer whale population monitored by DFO Canada.’

Whales and dolphins have been spotted ‘carrying’ or caring for their dead young multiple times.

These creatures could be mourning or they have failed to accept or recognise that the offspring or companion has died.

Scientists still do not know if aquatic mammals truly recognise death and are looking to carry out more research on this issue.

In 2016, scientists found evidence that whales and dolphins hold ‘vigils’ for their dead.

They analysed several cases where mammals clung to the bodies of dead compatriots, and kept vigil over a dead companion.

At the time, they said the most likely explanation was mourning.

The study compiled observations from 14 events.

They found mothers often carried their dead young above the water, often flanked by friends.

In many cases, the dead offspring were decomposed, indicating they had been held for a long time.