Malika Haqq put on a stylish display alongside her twin sister, Khadijah Haqq McCray, as they attended the star-studded You People premiere in Los Angeles on Tuesday.

The former Disney channel actress and her sister, both 39, opted to wear eye-catching black ensembles at the glamorous event.

The Keeping Up With The Kardashians alum, who often supports her best friend, Khloe Kardashian, flashed a cheerful smile as she joined other celebrities, such as Eddie Murphy, at the screening.

Stylish: Khloe Kardashian’s BFF, Malika Haqq, 39, put on a leggy display wearing a minidress as she joined her twin sister, Khadijah Haqq McCray, also 39, at the You People premiere in LA on Tuesday 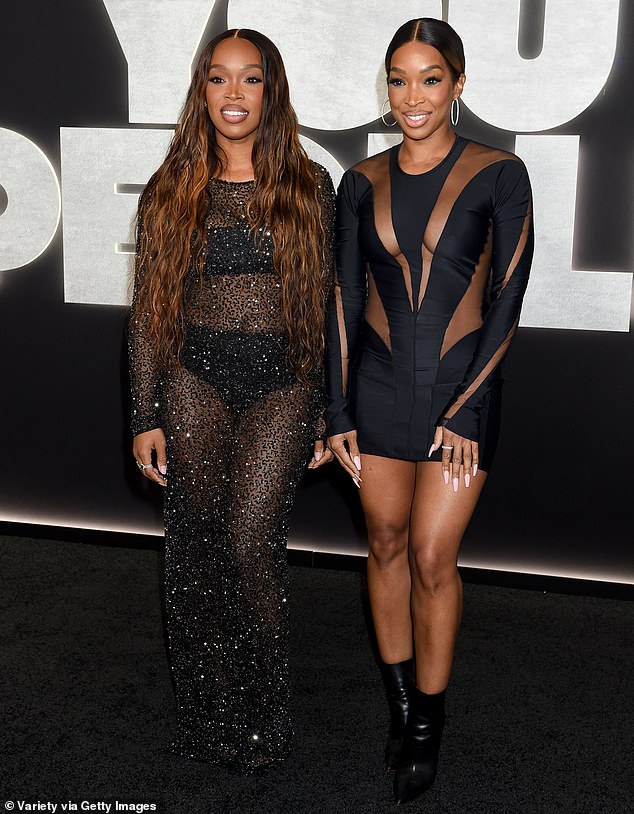 Sisterly duo: The Keeping Up With The Kardashians alum was accompanied by her fashionable twin sister at the star-studded premiere

Malika put on a leggy display as she donned a black, long-sleeved minidress that contained sheer cutouts throughout the fabric that gave a glimpse of her toned physique.

The TV personality chose to slip into a pair of black, heeled ankle boots to coincide with the color scheme of her fashionable ensemble.

The beauty parted her hair in the middle, and pulled her locks into a low, chic up do to reveal a pair of large, shiny hooped earrings for a flashy touch. She further accessorized her red carpet look with a classy ring on her left hand.

She also showcased her glammed up makeup for the exciting evening, which comprised of black mascara along with black eyeliner and smoky eyeshadow around her eyes.

The star opted for a nude-colored, satin lipstick that was bordered with a darker lipliner for a finishing touch. 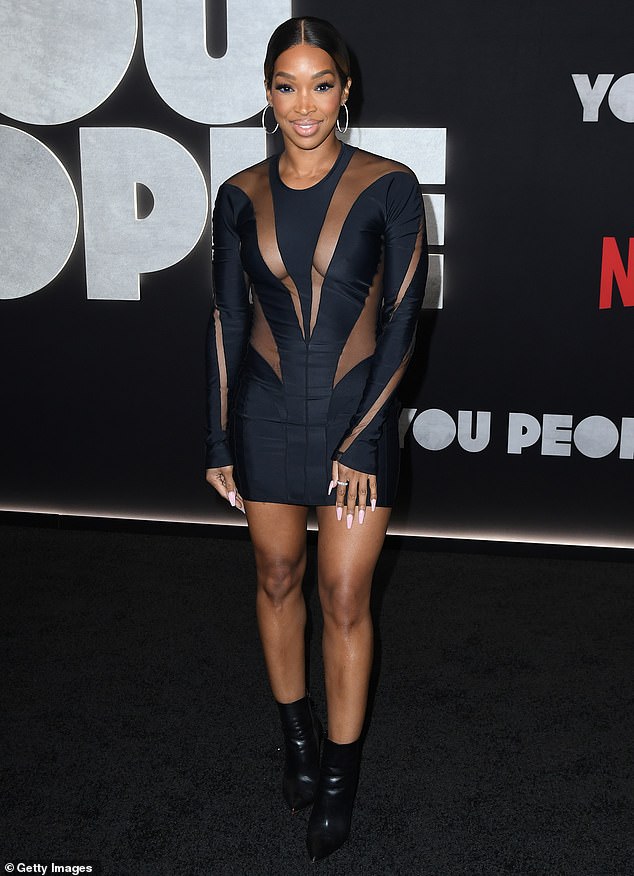 Making a statement: Malika donned a black, long-sleeved minidress that contained sheer cutouts throughout the fabric for her red carpet look

Malika was also pictured with her talented twin sister and fellow actress, Khadijah, who also stopped by the premiere.

The mother of three slipped into an eye-catching, semi-sheer black gown that was covered with glittering details that sparkled under the bright lights. The actress slipped into a pair of black shoes that were partially covered by the show-stopping, long-sleeved dress.

Her brunette locks were parted in the middle, and effortlessly cascaded past her shoulders in long, elegant waves.

Khadijah, who tied the knot with now-retired professional NFL player Bobby McCray in 2010, opted to add an assortment of elegant rings on her hands to accessorize the ensemble.

The star’s makeup was similar to Malika’s, with her opting for black mascara and eyeliner, along with a nude-colored lipstick which was also bordered with a darker lipliner.

Dazzling: Khadijah slipped into an eye-catching, semi-sheer black gown that was covered with glittering details that sparkled under the bright lights 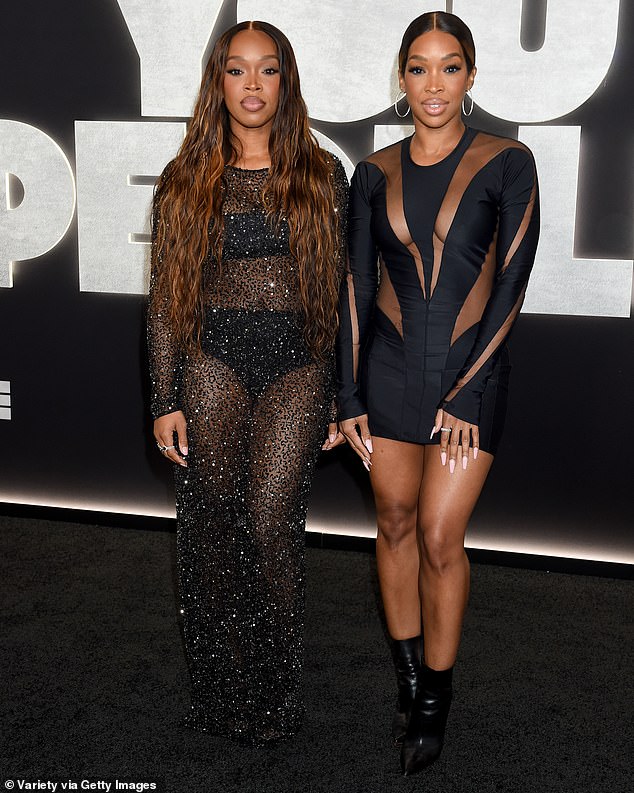 Talented: The twin sisters are known for starring in the Disney channel film titled, Sky High, in 2005 together

The Kardashians star uploaded a stylish Instagram post of the trio all glammed up to head to the award ceremony together.

Both Malika and Khloe donned similar, all-black strapless ensembles, as they posed for a quick snap. ‘People’s Choice Awards with my people,’ the mother of two had penned in the caption.

The Famously Single star also supported Khloe last year in August when she made an appearance on the Reality With The King podcast.

Malika had given an update on her how best friend was faring after welcoming her second child, a son born via surrogate in July 2022, with ex Tristan Thompson, following his reported infidelity and paternity scandal with personal trainer, Maralee Nichols. 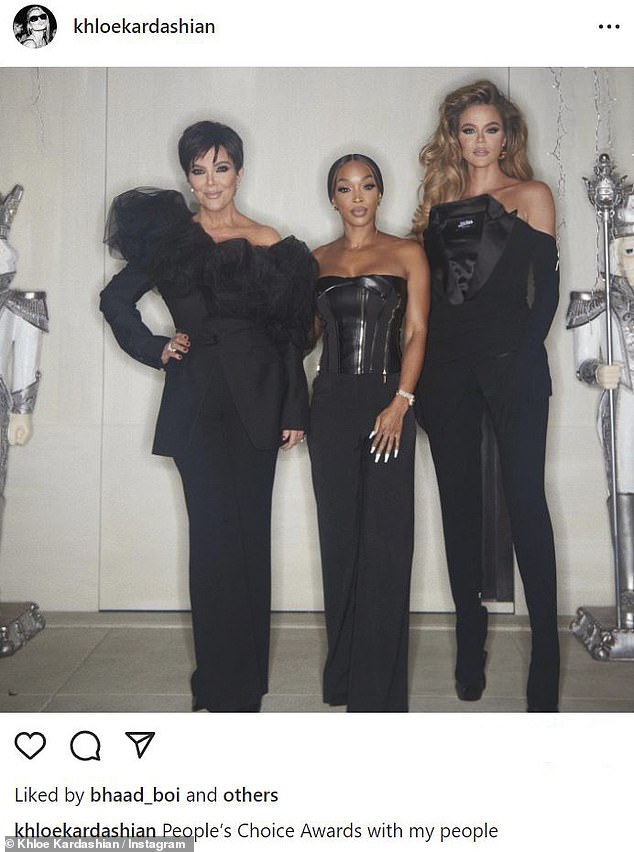 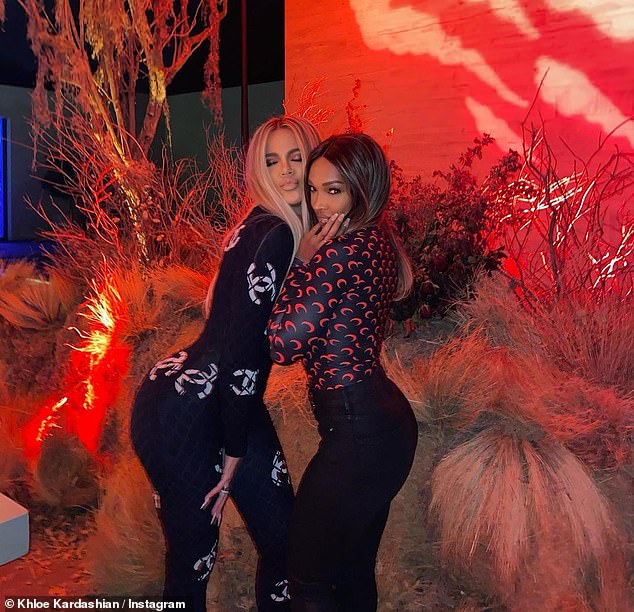 Biggest supporters: The Famously Single star also supported Khloe last year in August when she made an appearance on the Reality With The King podcast

The former Disney star explained on the podcast episode, ‘I think she’s doing about as well as you could expect for someone in her circumstances.’

‘She’s not the first woman to ever endure adversity in a relationship,’ the actress stated, adding, ‘but there are some glory times that are meant to just be glory times that have been stripped from her and that’s really sad.’

Malika, who first gained recognition for starring in Sky High (2005) alongside her twin sister, later added that Khloe, ‘really is one of the strongest people I know, because she’s got a good head on her shoulders. Faith is something else, and she’s got a great deal of it. I’ll tell you that much.’

Despite their split, Khloe and Tristan still remain close to maintain a healthy co-parenting relationship. The reality star recently attended his mother’s funeral in Canada on Saturday following her sudden passing to lend her support and condolences. 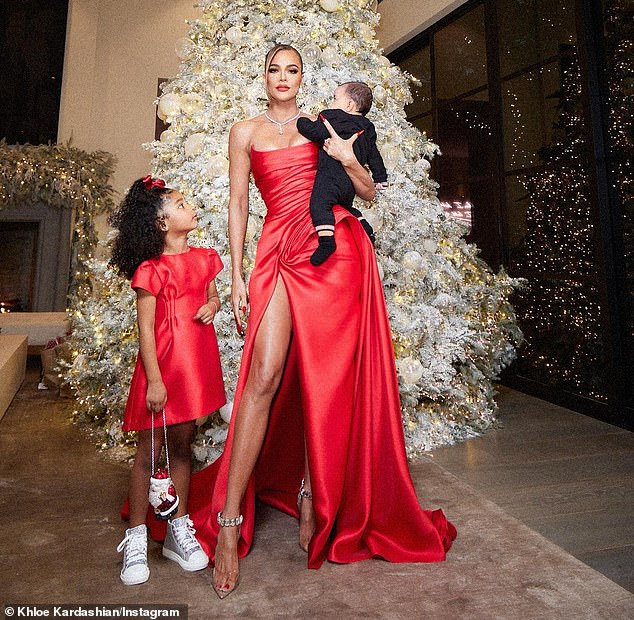 Staying strong: The former Disney star explained on the podcast episode, ‘I think she’s doing about as well as you could expect for someone in her circumstances’; Khloe celebrated Christmas with her daughter True, 4, and baby son, whom she shares with ex Tristan Thompson